All the ingredients had been gathered and the table was set. The casino was as deco'd out as it was going to get (for the most part) and all of the instructional details had been scribed & displayed in public boom form. All the carrier pigeons were sent and all the town criers were given their marching orders.

And all that was left was for the suckers -- I mean, patrons -- to arrive and play the games.

The Gooch and I were ready and we were both feeling confident:

It was opening day of the innagural Casino Night in Barter Town and the suckers -- I mean, patrons -- begin pouring in through gates, teleporters, and everything in between.

The event kicks off without any problems at all: 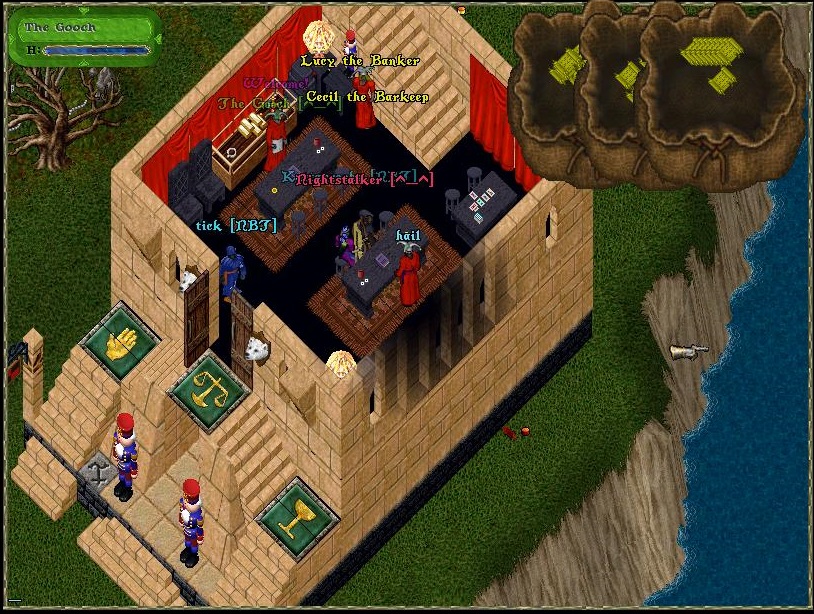 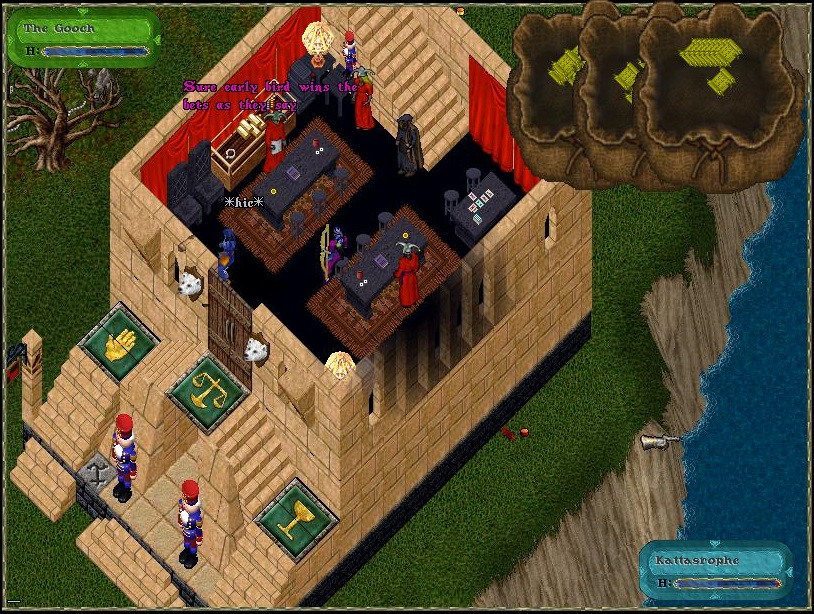 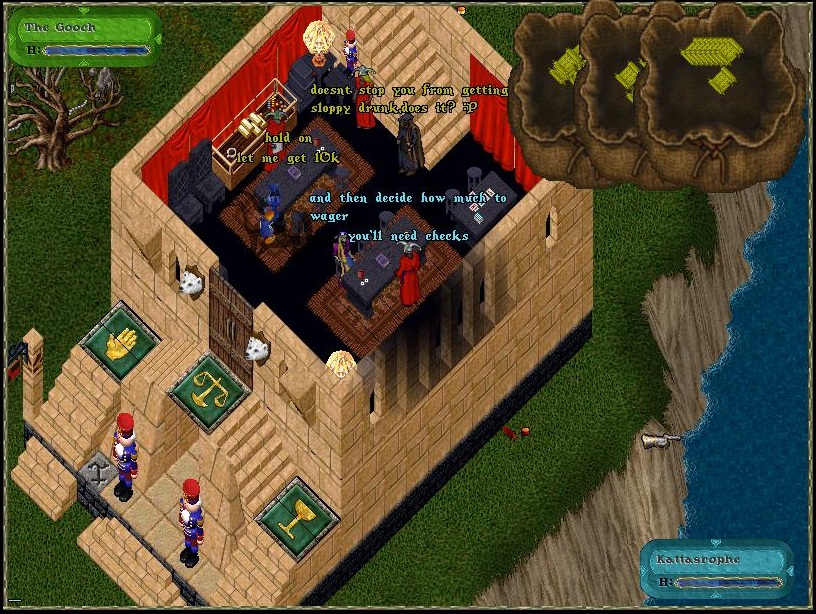 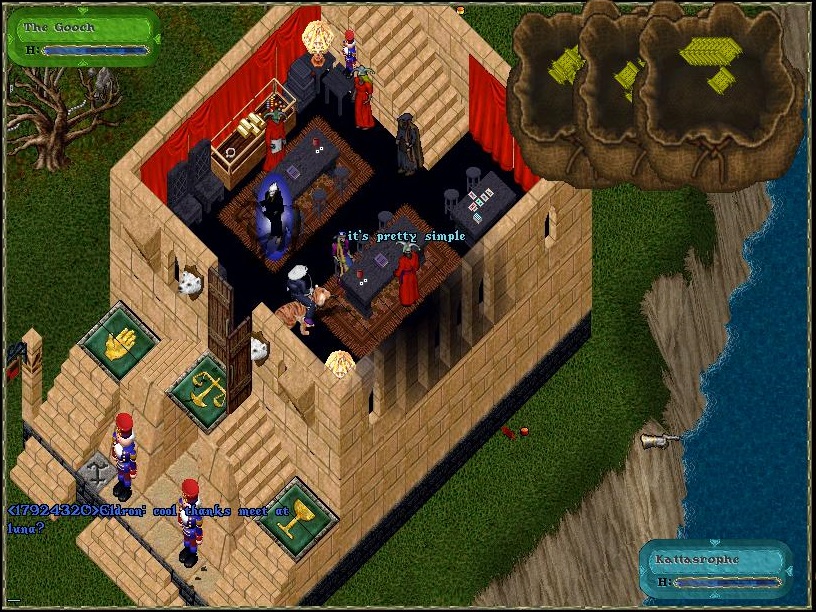 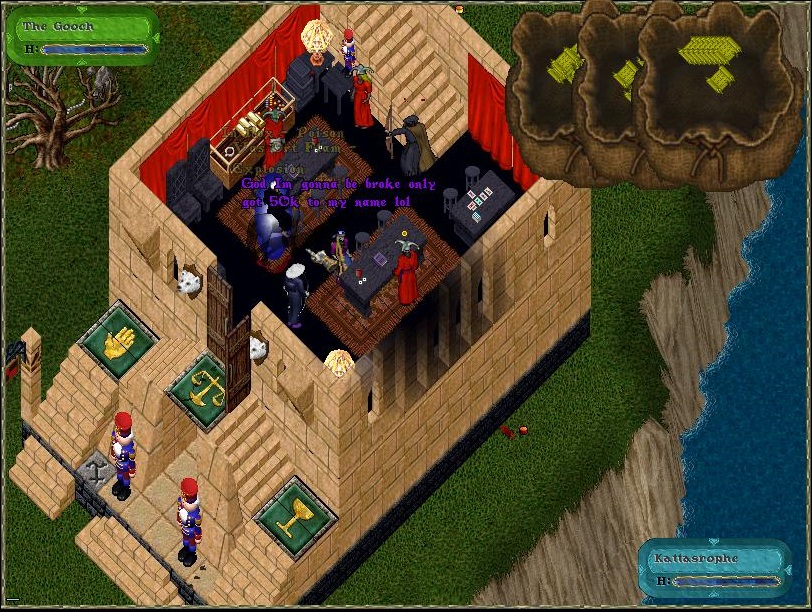 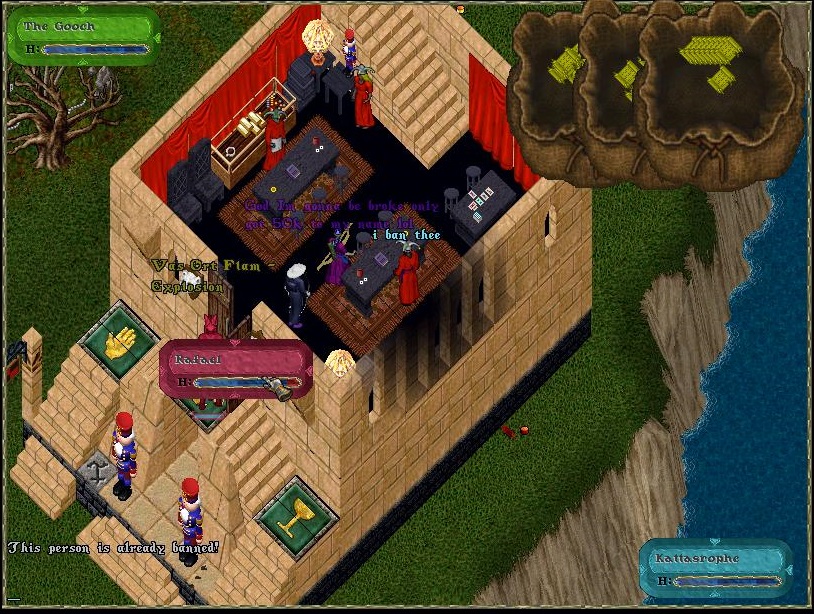 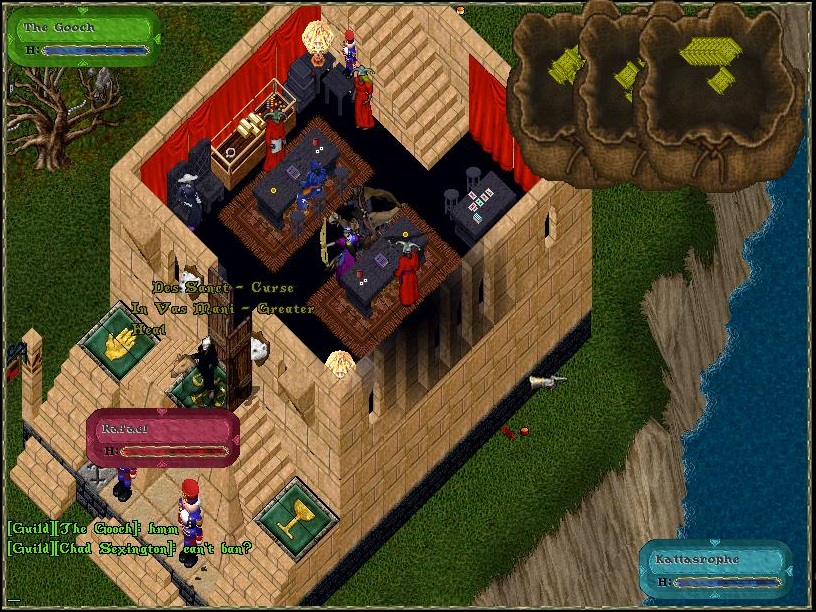 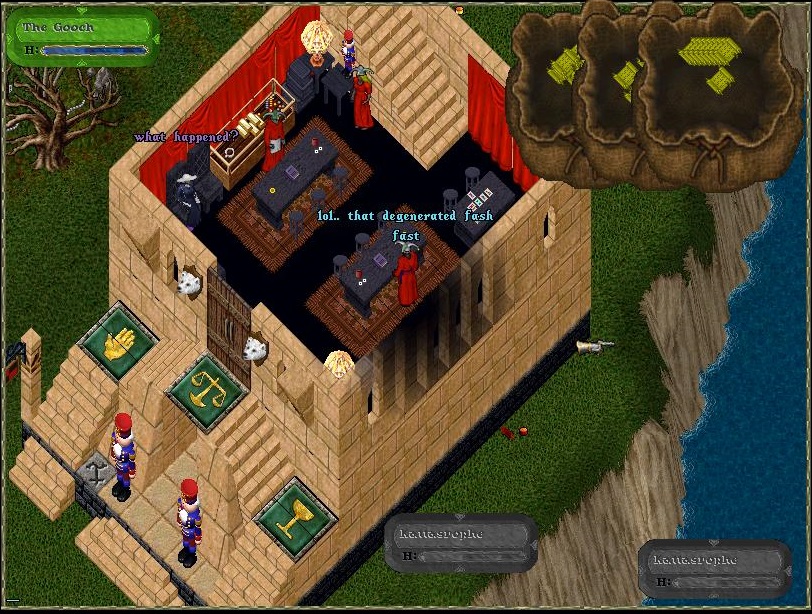 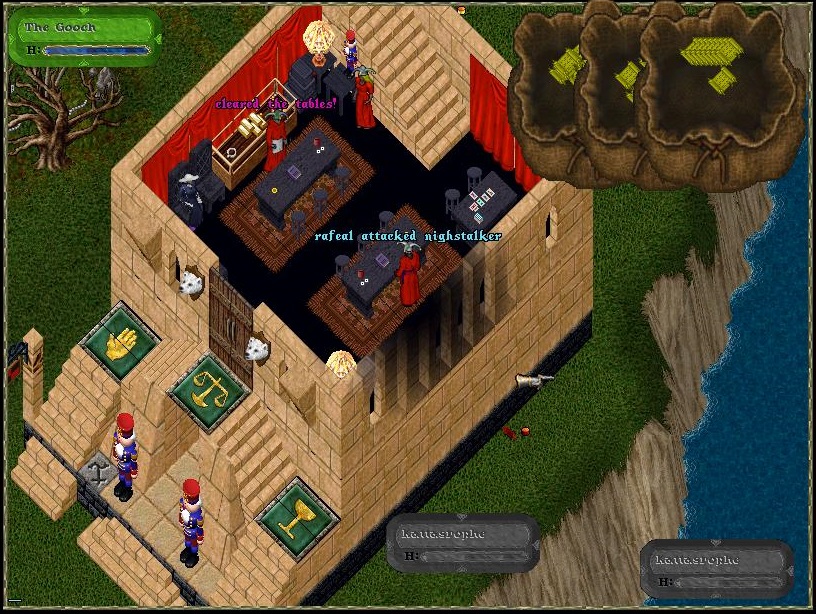 Anyway, the suckers -- I mean, patrons -- eventually find their seats, and the event continues. Some come and go, others stay the entire hour, but at the end of the day it all runs pretty smoothly: 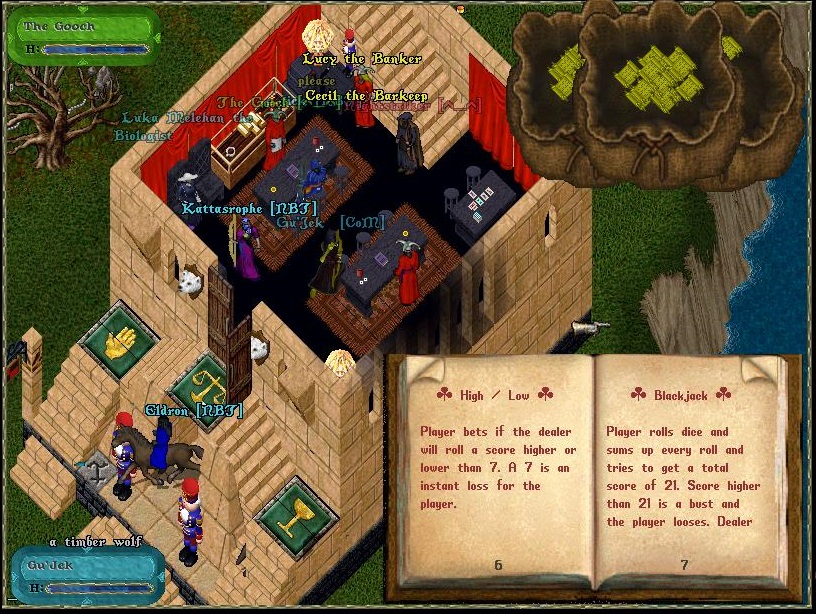 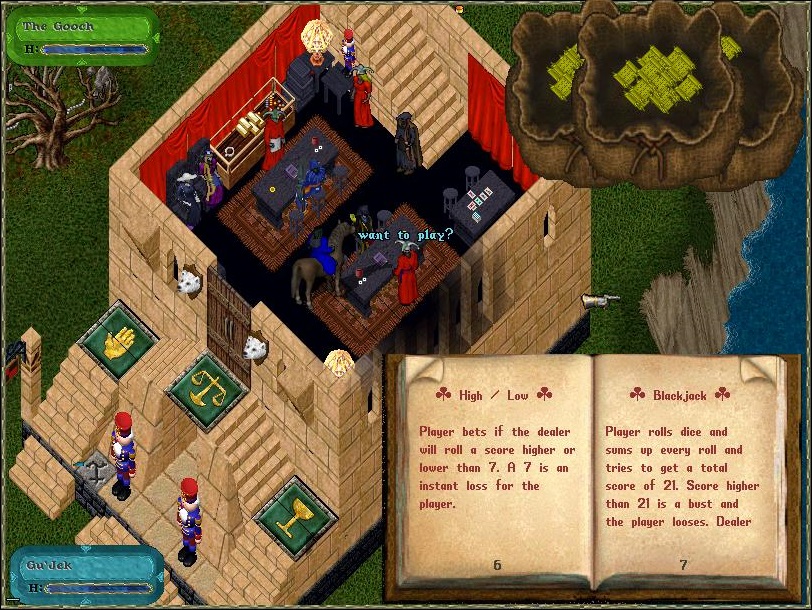 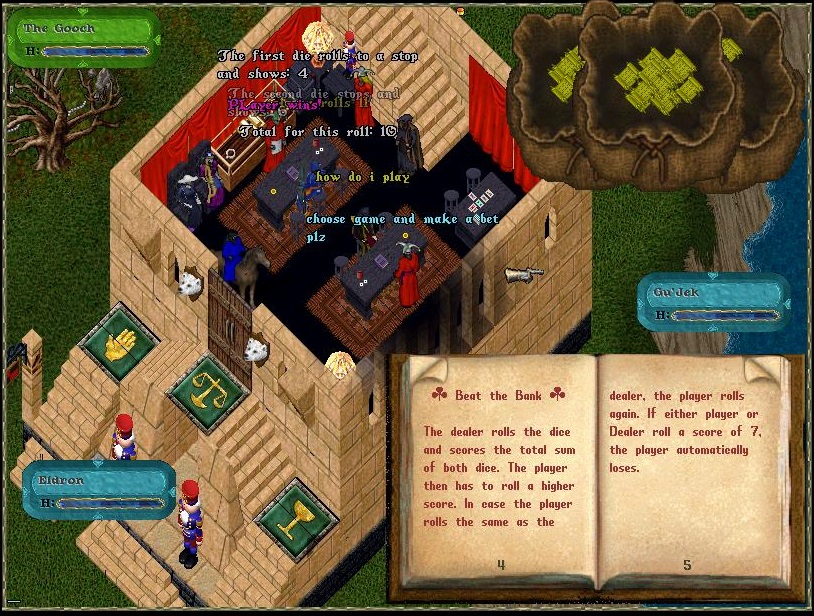 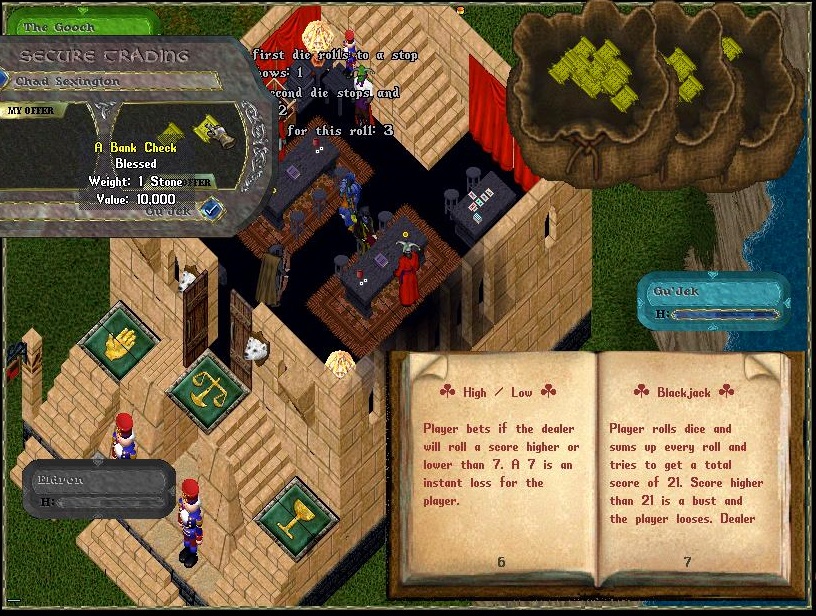 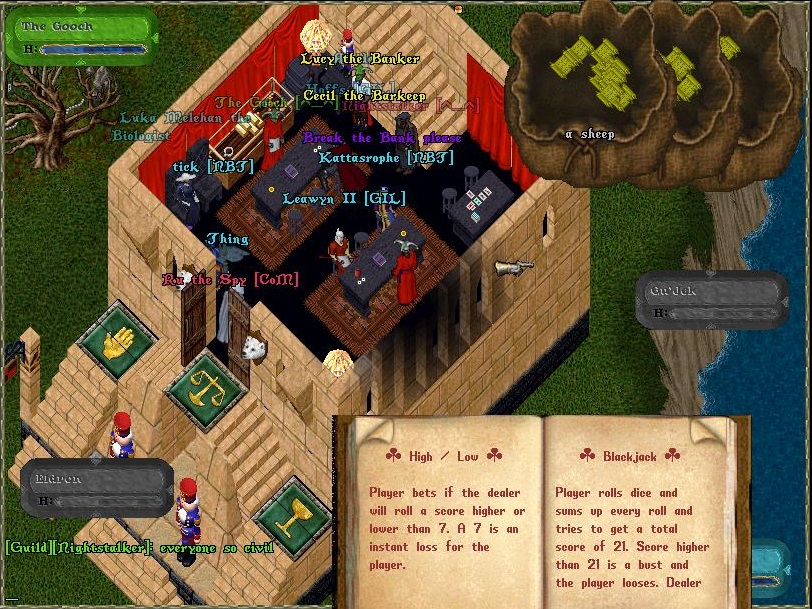 Most people stick with the minimum wager of 10k per game while others occasionally get a little adventurous and start bidding 100k and beyond.

(I see if she bites a third time.) 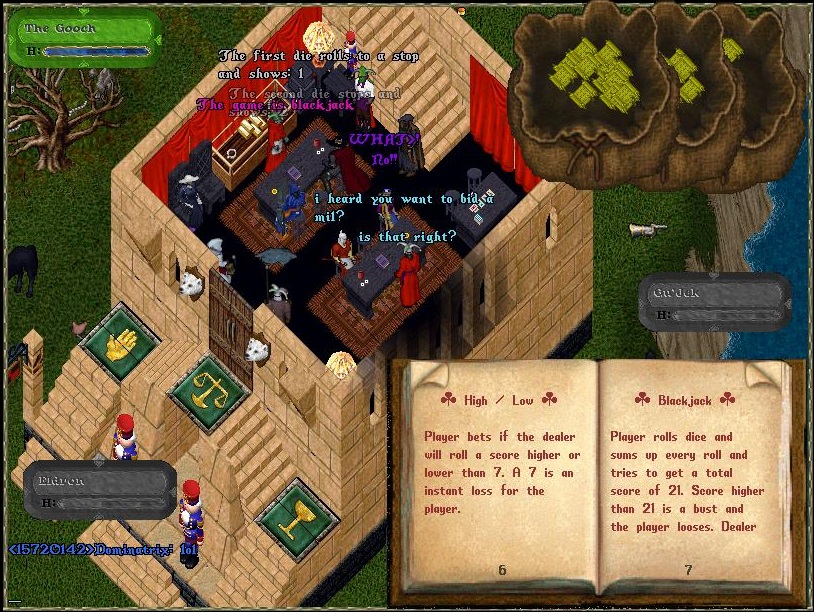 Some were having good luck and others were having bad luck. And there were some that would rather be ravaged by lich lords than empty their pockets one check after another: 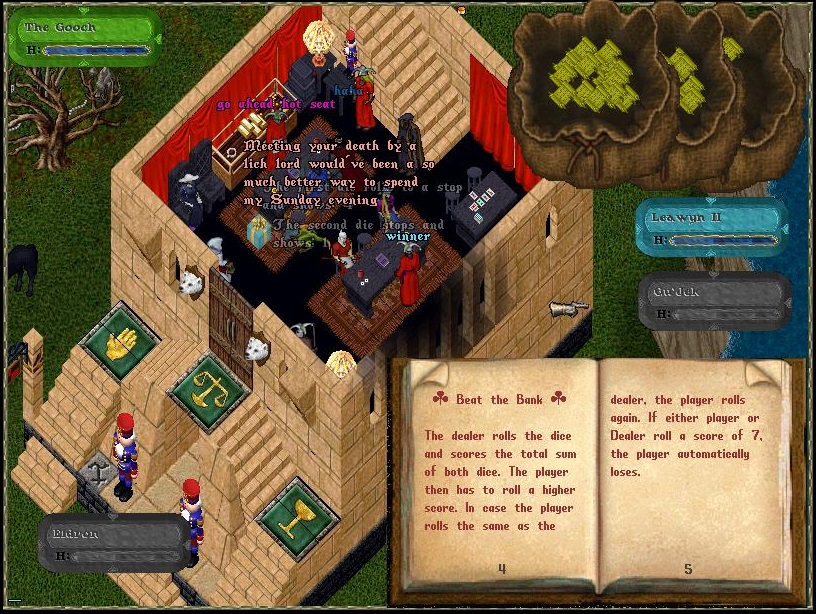 The highlight of the night had to be when a drunk in bone armor entered the casino, bet 1 million gold on "Lucky Guess", lost, and then headed downstairs to find another drink: 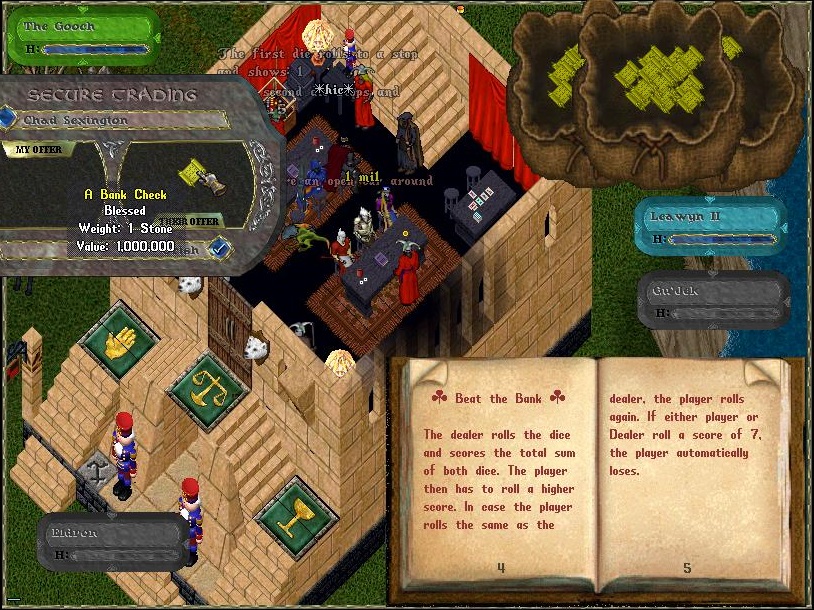 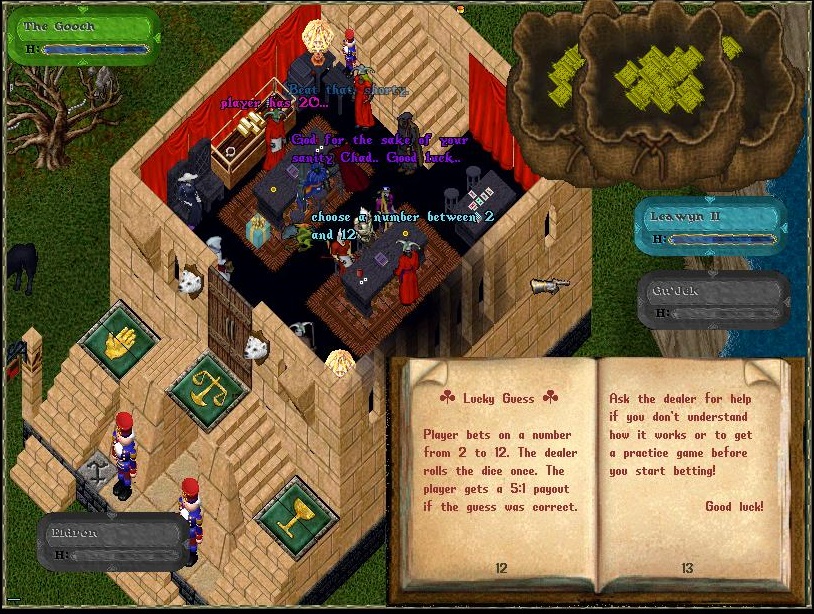 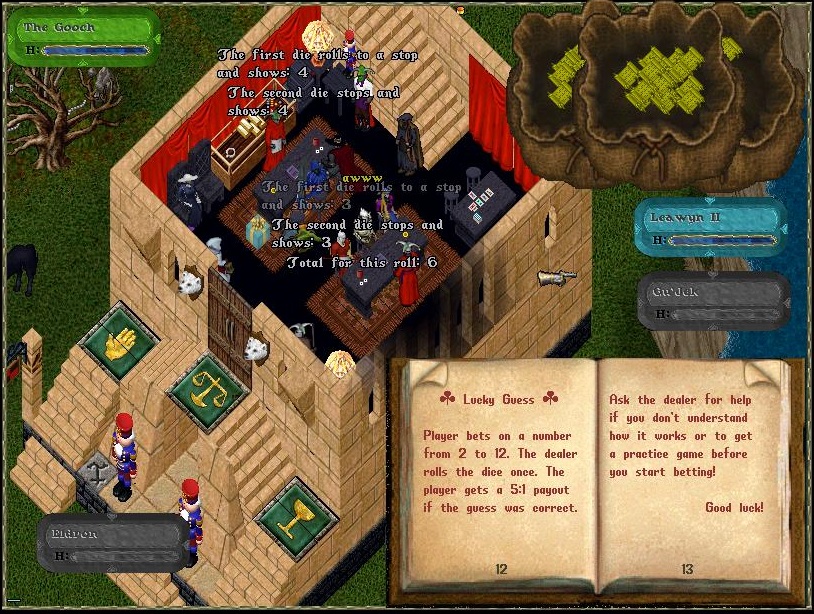 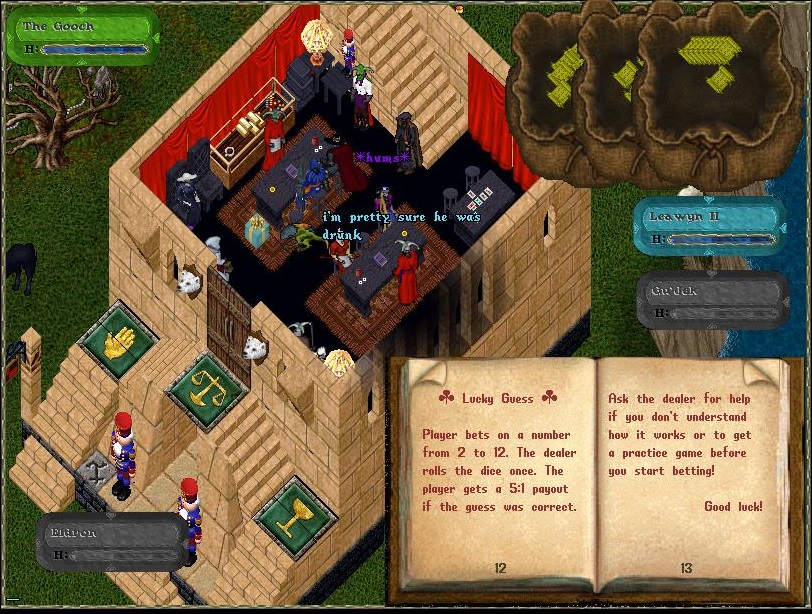 And the most brilliant thing about the design (if I do say so myself) is that with 3 players per table, odds are that at least one of those players is winning big and their joy will become so infectious that it will encourage the other 2 players to continue playing the games themselves. 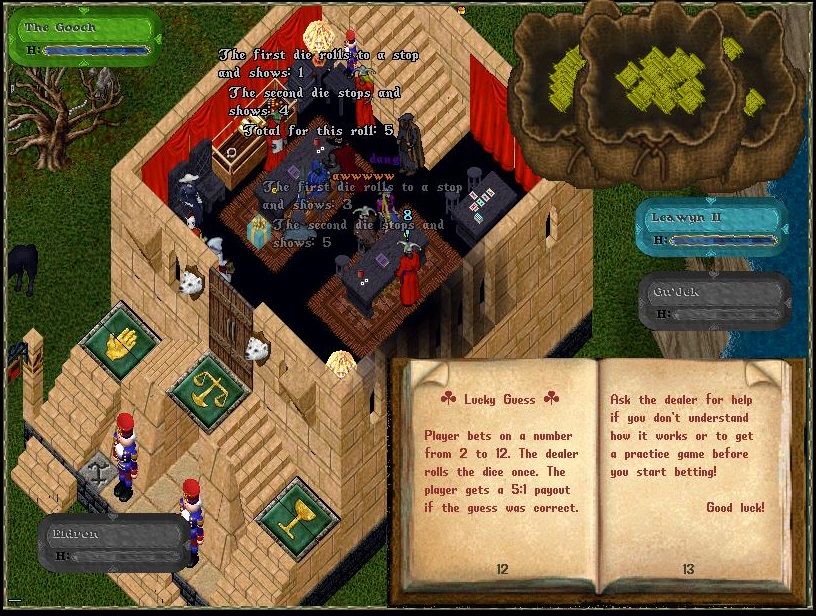 (As long as somebody is winning, everybody is happy.)

Eventually, the hour is up and the event is over: 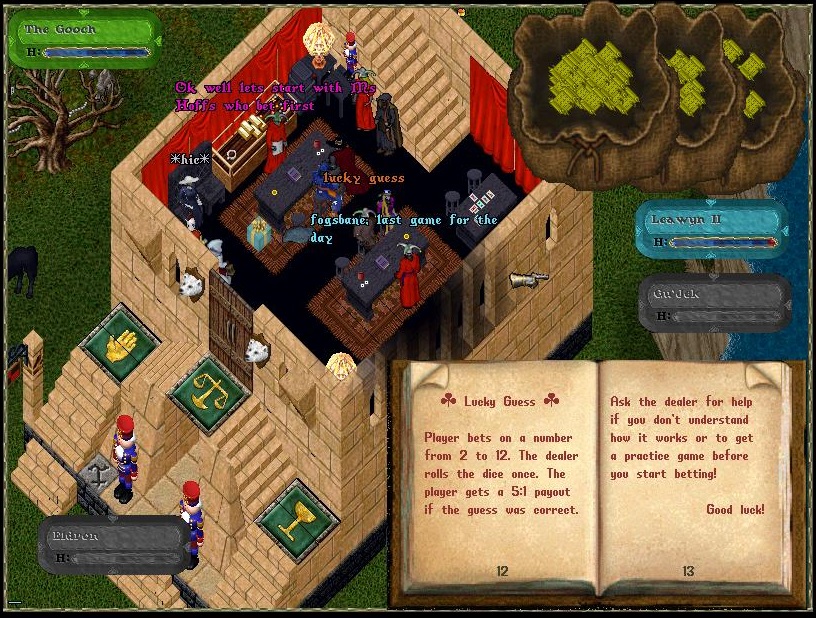 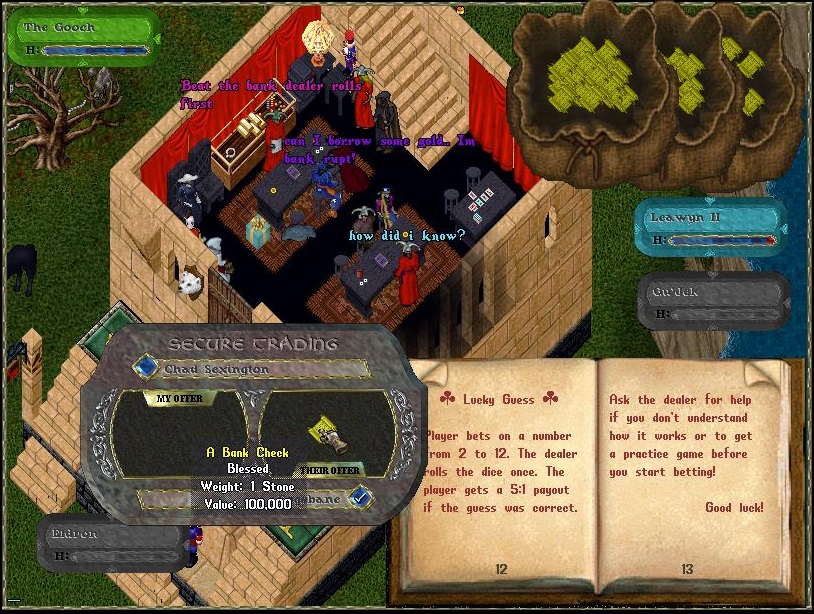 And thus, the first ever Casino Night in Barter Town came and went to great fanfare and yet... people still want to know:

What was the scam?

What was the trick??

When do we get to the punch line where I can point and laugh at all the suckers -- I mean, patrons???

The simple answer is this: The scam is that there is no scam. The trick was that there is no trick. The sick, horrible, beautiful truth is that a casino doesn't need any help when it comes to stealing. The brutally ironic truth is that a legit casino will earn more gold in the long run than a corrupt casino. A lesser man could have easily banned everyone in the casino the moment the first 1 million gold bet was made. That lesser man could have accepted the gold check, snapped off some screenshots, and then have a big ol' laugh over it. But that kind of thinking so very short sighted. If you do the math, the numbers always work out in the house's favor. I make it publicly known that "the house always wins" and everyone just nods and smiles as they continue to play -- generating much more gold in the long run.

(Why didn't anyone ever tell me that being honest could be so profitable? This changes everything!)

It's a completely transparent, slow motion crime, and I had a net profit of exactly 3,498,000 Gold in only 1 hour of casino operation. And this was only the first night of many nights to come. (And sure, The Gooch ended up down 870k in the same amount of time, but it's always going to be 2 steps forward and 1 step back.)

The truth is that the idea of a "casino" fit the theme of Barter Town and whatever is good for Barter Town is good for Siege Perilous. The more populated Siege Perilous becomes as a whole, the more people there are to steal from in general. This is the longest con of them all with the biggest and most necessary scope of them all. Through the casino, we are able to steal from people through math at the tables while making the shard more interesting for even more people... to steal from in the future. 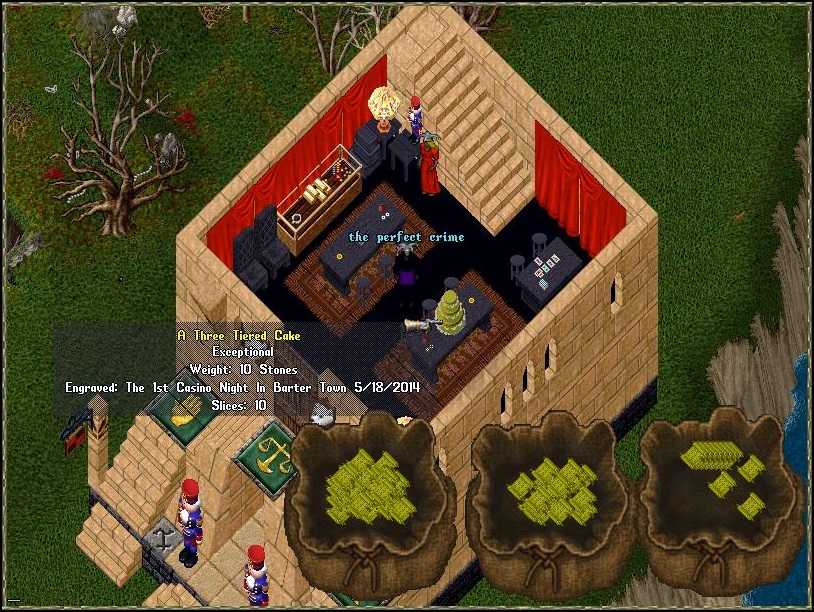 Also, I twisted the truth a little when I said this was only a week old plan that had just been put into motion. This was actually a 4 1/2 year old plan that I had for Barter Town that I was never able to materialize (as seen in Episode 304).

(It's nice when things finally go according to plan.) 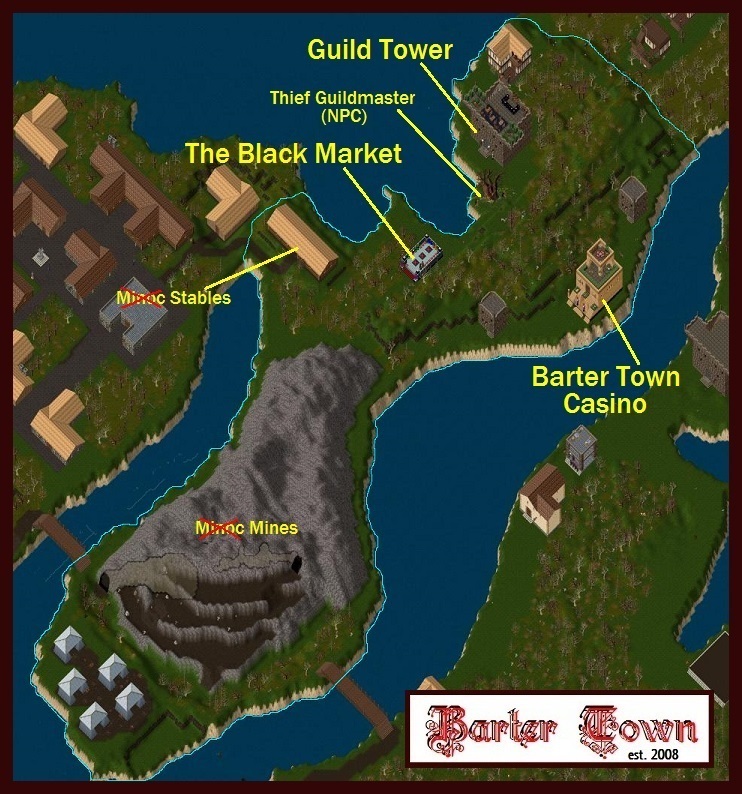 ***It should be noted that all the games and rules for each game were completely ripped from the Knuckleheads Casino on Drachenfels. All credit goes to them. Don't let anyone ever tell you otherwise.***