A wise man once told me something to the effect of, “Tell a thief what he can not do, and he will set out to do it.” Few sages possess such insight about thieves, and even the King of Thieves is no exception to his wisdom.

I often set out to commit some of my more notorious heists because someone said I could not. Others are done to show the patent absurdity of the statements that many less intelligent people spew.


Background:
I made a comment on Stratics asking why daily spawning “rares” were contained in the “UO Thief” forum. Apparently, this was a huge No-No, according to a handful of people and I got a lot of responses that essentially said they’re right for no reason and I’m a troll for explaining why the description ought to be updated to be more inclusive.

It was this ridiculous post that required me to remind the UO Community that real thieves steal from you, steal from your house, loot your corpse, rob or loot your pets, steal and loot your boats and will do so with style.

After this conversation took place and in the aftermath of a few upset marks posting on stratics about how I stole a potted plant from their houses, I visited Great Lakes to further make my point.

I decided it would be funnier if I only stole potted plants. Looking back, I have no idea why I decided to only steal potted plants during my visit to Great Lakes. I believe I also stole some growing potted plants but I didn’t keep pictures for them.

Some of the results of my Hijinks there…
::YOINK!:: 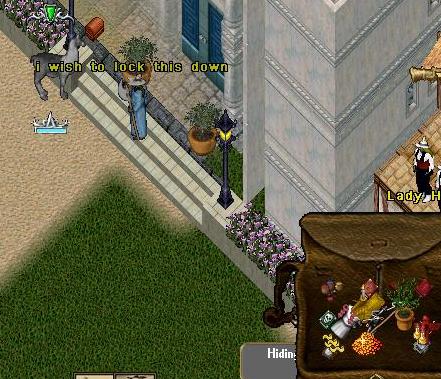 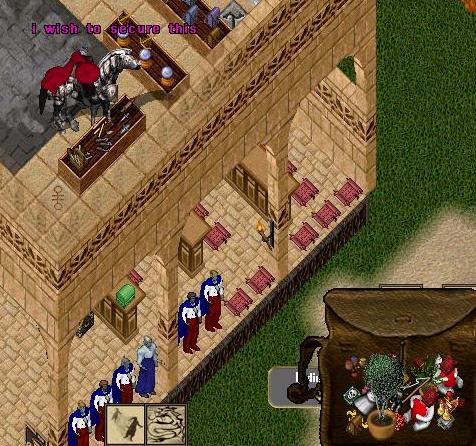 Thank you for reminding me that a real thief isn’t limited to just picking pockets. Please try to remember that a real thief actually takes property from someone else, not garbage that is laying on the ground for the sole purpose of being picked up.

As for trinkets, I steal anything I want that I feel is of value. Much of what I steal is worth a fortune, and much is just valuable to me because I need it.

Dear Everyone That Had Deco Stolen,

Black Sun was the one who told us we weren’t real thieves if we didn’t rob you.

Stealing From EMs Or Players At Events Isn’t Fun…


A handful of players were upset that I chose to steal from an EM that had left his ability to be stolen from toggled on. Everyone has been made aware that those same people who complained also pressured the EM to take precautions against his being robbed again.

As a result I was FORCED to rob players whenever I could not rob an EM. Tell a thief he can’t rob EMs or steal event items, he’ll do what he can to get around that.

Furthermore, I was told repeatedly that as a pvper I should be so thankful Legends holds Felucca events. Let me show you a “Felucca Event” on Legends from these “almost were an episode” pictures.

The Event blocked out any character that was red from entering. The only way in was through a gate in Trammel. 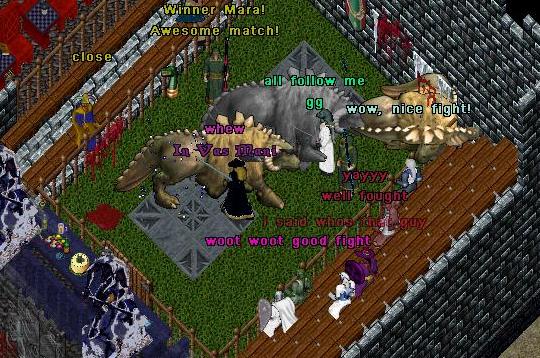 Participation for these “Events” consists of 4-5 people multi-clienting and using pets to fight each other. The winner? Nobody, because nobody is in anyway challenged. The random number generator produces a slow and painful contest of 2 hp bars inching down as two bouras hit each other.

I was so bored watching the event and then was told that not only can I not attend events on my main chars, red chars, the awards will be now be in Trammel too. 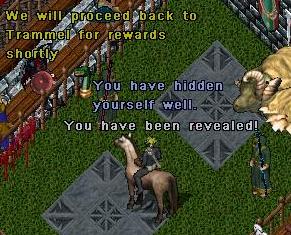 This was lame, as a result I was forced to steal a part of the Legends “PvPers Are Second Class Citizens” Fence when the EM picked one part up

I’d say “YOINK!” but it’s a freaking fence with nothing special about it at all…

Stealing at events is fun. Just ask EMs Autolycus and Drosselmeyer. They hold great events and when a thief robs them, it’s just part of the event. They plan for thieves and everyone has fun.

The vast majority of players have no more appreciation of uo thieves than they do of real thieves. They don’t like having their pixels stolen.


This is the stupidest thing I’ve heard of. She based this statement off of a handful of upset marks. The majority of posts in threads about stealing are positive.

If we could draw off her analogy between game and real life does that mean people I pk appreciate me as much as a murderer in real life?

Let’s see if Lady Belle appreciates being hunted down, killed and looted in game as much as she does in real life.

Hmmm…. Corpses and a dog? I bet Someone’s here!

Shocker… I found a silver farmer…. 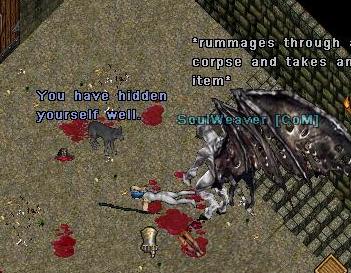 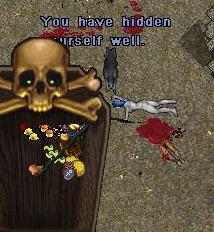 I think she’d care if a thief and a balron were looting her corpse in real life a lot more than in Hythloth.
::GRIN::

I hope you enjoyed these images and background from episodes that never were. For one reason or another I deemed them unfunny or uninteresting for their own episodes.


-Evil Lord SMuRFY,
The King of Thieves and Unfinished Stories