Episode 0304: The Cave of Eternal Stench


A tale of a strange plea for help was spreading across the lands, supposedly a group of savages who are warring with a group of orcs had run into trouble and come for aid.

While I could care less about some silly fight between two groups of barbarians, word also had it that a large assortment of mages and warriors were signing on to help under promise of riches to be had within the orcs lair.

Although I personally found it a bit hard to believe that an orc would have anything of value, I decided to spy on the meeting place anyways, perhaps a few suckers would fall for this obvious lie spread by the savages, and hopefully they would be well armed and equipped. While my doubts on the existence of worthwhile orc loot are firm, at least the humans and elves would have items of worth. After packing my bags with necessary items to enter the orc caves (enough magical items to take the form of a wraith and keep myself invisible for the duration, and a pair of clothespins) I head for the meeting place and wait in the shadows for the stated time. At first only one or two people were there, but as the time approached, an incredibly large group had formed. 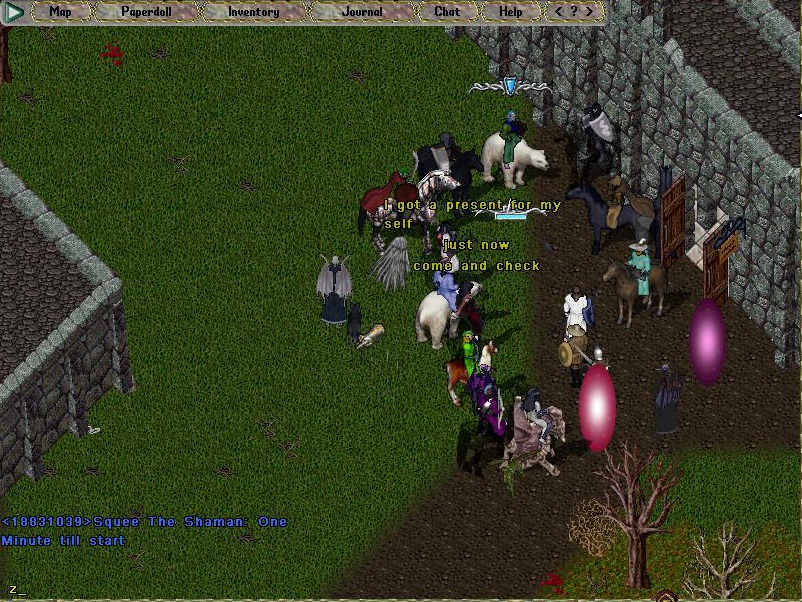 A bit surprised at the size of the group the barbarian had managed to con into helping, I could only imagine this had something to do with the fact that the one who had come for help was female and nearly nude.....not my concern though, this was playing out well for me, the more low IQ warriors around the easier it will be for me to blend into the chaos.

Before long comments go from the battle to what will be used as compensation, as quite obviously the savages do not use gold as we do. I nearly burst out laughing, ruining my cover, when she replies that she has a few articles of her clothing to give, plus the "magical orc loot" in the caves. "they can't possibly be this dense!" I think to myself. "Who would risk their lives for this smelly woman's clothes and what is probably nothing more than a few disgusting loin cloths.."

To my surprise, the crowd seems incredibly interested in these items....why is beyond me, but gold is gold, and if they want them I may as well make a bit for myself... I quickly run to my bankbox and pull out an extra thick pair of gloves, I had a feeling I would be needing them soon...

As the large group prepares to depart, I sneak up behind the unwary savage, being cautious to keep to the shadows and use my ghostly form to blend in with the surrounding stone, First order of business....retrieve the items promised by the savage that she is no doubt carrying in her bag.

Holding my breath, and trying not to stay close too long lest the stench form a solid barrier around me ruining my ability of stealth, I quickly grab a few torn up shreds of smelly cloth.....nothing else but a few berries and her weapon seems to be in the bag so I can only gather that these are the "reward" she spoke of. 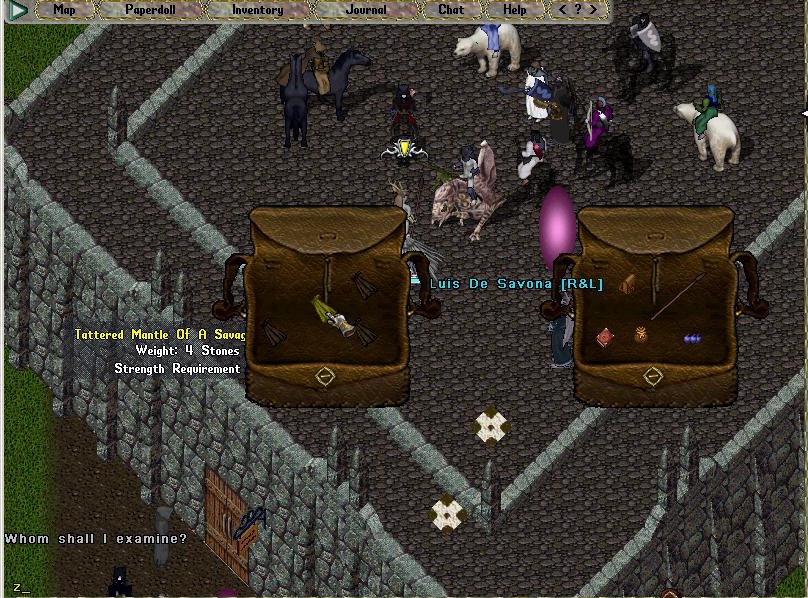 Begging every known god for this to be worth it, I quickly, while holding them far away from me, run the smelly cloth over to my nearby lock box, and seal it in a magically sealed container...so as to not corrode my other items. I make my way back towards the group, and find that they are already under way, a magical portal was still open so I quickly and silently follow.

Staying in the convenient shadows from the wings of the great beasts they had brought with, and using the piles of dead orcs on the floor to hide my form, I stay with the blissfully unaware group, taking whatever I want from their fallen comrades and pulling any supplies I took fancy to from those nearby. As was expected, the "orc loot" seemed to be little more than smelly clothes....and a bit to my disgust what little clothes the orcs had on them seemed to be highly wanted. Cringing at the thought, I steel myself and prepare for the dreadful task of touching orc clothing. I can only hope at this point that their want of these dreadful pieces of cloth is genuine will fetch a decent price.

Carefully I watch the pieces being looted from the dead orcs, and while the group continues on, I quickly grab them and stuff them in my own bag. So far not one of the group has even seemed to notice their missing items, so far so good. I continue following all the way through the horrifically smelly cave...though at this point my nostrils had already gone numb from exposure. The group battles on past hordes of orcs, slaying them easily as they go, and finally kills the orc leader. 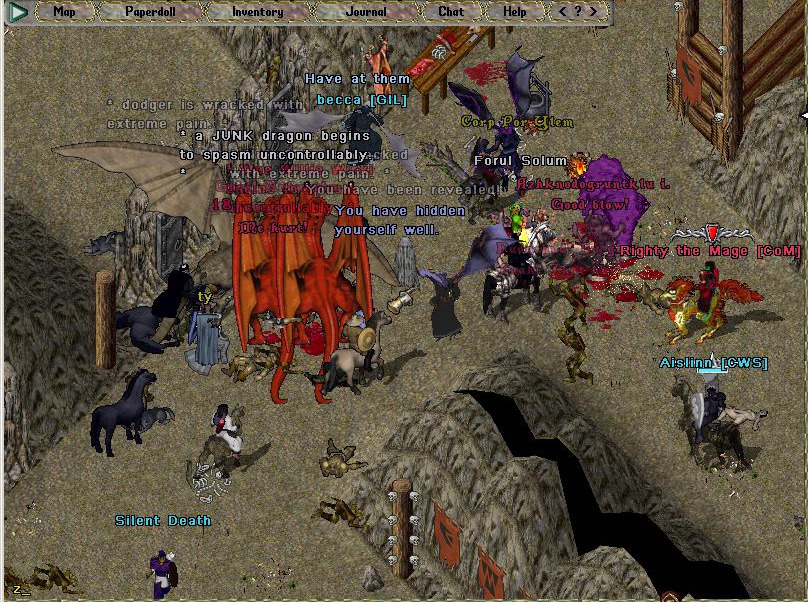 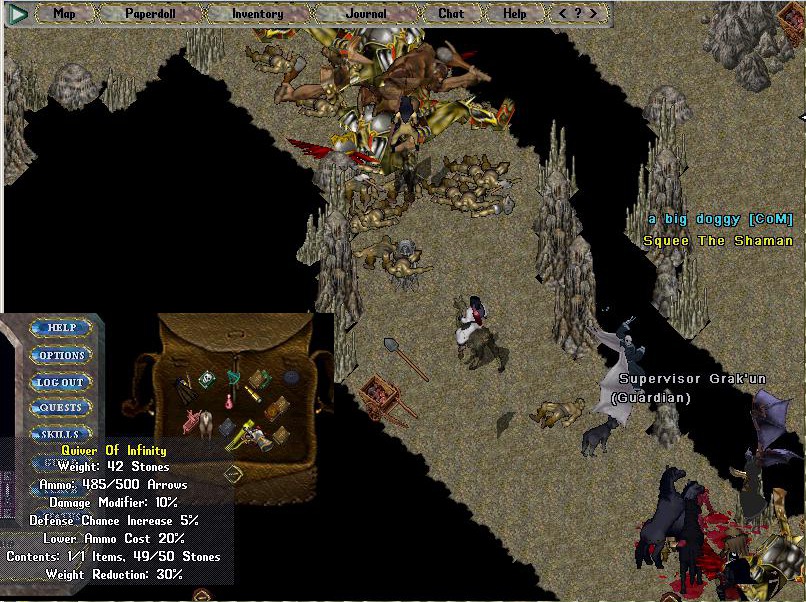 With the area secure, the shaman casts a spell, shattering a wall and leading everyone to the "magical orc loot", which evidently was contained within a quite large bucket in the middle of the room. Curious, I move closer to see what is contained within.

"Shoes?" I say to myself. "The magical orc loot is shoes??" I stand back in awe at the group, who seems genuinely excited at this find. Perhaps these were not warriors as I'd thought, perhaps this was a roaming fashion troupe, trying to make a new, bolder style for summer?

I shrug to myself, but continue my work, I reach in and quickly take a pair to inspect them closer, and a bit to my surprise on doing so a spell triggers on the bucket, not allowing me to get close enough to take another. Inspecting the shoes themselves, I find they have a curious spell cast into them, which causes the wearer to polymorph into orc form. Interesting, a bit amusing, and novel, but nothing more than any third rate wizard could cast on them. The band of nearby fashion consultants however seems genuinely in awe.

Not to be thwarted by such a simple protection spell, I simply stay in the shadows by the tub, and quietly take the shoes from each person as they place them in their pack. When the group was nearly done, panic struck the herd....they began to notice the missing items. Too late to do anything about it, a few make vain attempts to locate where I'm at, before finally giving up and heading home. I follow those that remained out of the cave, as quietly as possible dragging a large pack of clothes and shoes behind me.


Outside, the group disperses, mostly disappointed as it seems all of their loot and promised clothing "was lost", leaving only a lone mage and the shaman, I take a quick peek again, to see if I had missed anything of value. I decide to, as unremarkable as it is, take the shaman's weapon....perhaps the group would show as much interest in it as her dirty rags?

Not wanting to leave anyone out, I quickly check the mage as well. nothing...

While turning from the mage, and archer rides up... again...can't have anyone feeling left out. I take a quick peek into their bag.....

"Old torn up leather pants? Sure...why not....it goes with all the other pieces of torn up clothing I've gathered today....." I think to myself. I quickly check and ensure my protection spell is still in place, and run off in glee....mostly thankful to be out of the wretched cave. The archer gives chase but it easily lost, they never stood a chance anyways.

Returning home, I bag all my finds with intent to pawn them in the local auction house, but remembering the magic barrier of the shoe bucket, and how many friends those that were there must have, I could only assume word had spread that with the orcs gone you need only ride down and get your own pair for free. I quickly return to the caves, clothespin in hand, and make my way to the far end once again. Hours pass and one by one, people come down intending to get free shoes. I quietly wait by the shoe tub, silently taking each one as it's bagged. 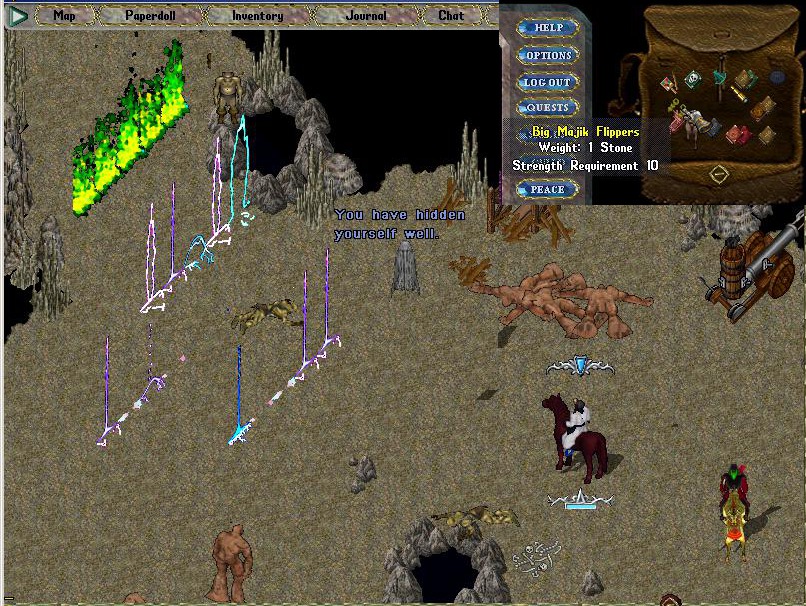 Some took offense, and many tried to locate me, but in the end it was all futile, hours later, with another large bag of shoes I emerge from the cave and head home for some much deserved rest, leaving a note for a cousin of mine in the assassins guild that there is easy prey to be had..

A few weeks later:
Trucking in my foul smelling loot to the black market auction house, having invited mostly the same group I had pilfered the items themselves from, I read the list of my takings. The crowd, angry as they were, knew the rules of the house, and understood the only way they were going to recover "their" items was from a fair bid.

As the bids rolled in, I was amazed at how much one would pay for smelly cloth....in my wildest dreams I never thought I could pawn off smelly orc loinclothes and torn capes, and cheap parlor trick shoes for such a price.

In the end, I leave, less one pile of dirty cloth, with a wheelbarrow filled with over 6 million gold to deposit. I thank the gods that it was worth it.