Every so often, I make a mistake… It’s hard to believe when you look at my track record but they DO happen. ::Grimace::

The worst is when I am doing well and then screw up when it counts the most.

I encountered The Glorious CHRIS and The Rude The Gods on Atlantic in my favorite stomping grounds, New Magincia. I saw these dastardly villains moving about their public home with their horrible names violating my laws and I decided to pay them a visit. 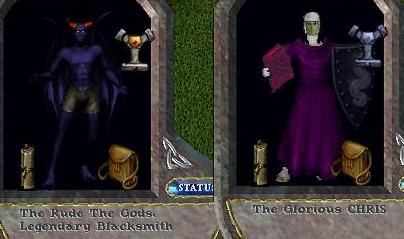 I entered the public place and encountered a thieves dream, two obvious fools moving their belongings around. I acted immediately…

And fled outside to look at my new stuff.

It was not my best grab… But it was by no means garbage to pull about 10million gold worth of stuff from these vile fiends.

So, I decided to push my luck and reentered the house, for the second time, they didn’t notice the doors open or hear me slink up the stairs. ::GRIN:: The lizard costume always works.

They continue moving my future belongings around as if they hadn’t just lost a princely sum. I struck again when they moved a barrel.

And, I make my way back outside to investigate what I got. 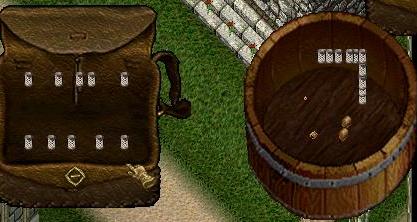 As you can tell, I’m having a pretty good day. These guys aren’t doing anything about the fact that I’m slowly making them poorer and I’m giddy at the prospect of what I’ll get next. ::GRIN:: I like these foolish villains. They’re so much easier to steal from than the fine citizens of Siege Perilous, my usual marks.

I run to the bank and put my new stuff in storage, only a fool and his gold are quickly parted; A thief and his gold live a long and happy life together at the stash house.

I return in time for a very heavy commodity deed box to be unlocked, I make my move and slowly attempt to walk out of the house, step by step.

My escape is hindered by the crushing weight of my loot. I am inching out by terrified of being caught and having the gravy train end and all over the contents of this MYSTERY BOX.

Progress is slow but it’s happening. I inch to the door, and finally make it to the steps of the house. 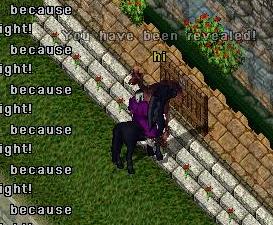 The “Glorious” CHRIS has caught me on steps of the house, just inches from making a clean escape with a heavy commodity deed box. 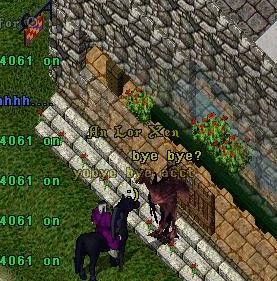 And my encounter with Foolish Villain A begins on a pretty standard note. He threatens my “acct” with going bye bye. I assume he means I’m free to leave with my new stuff.

Foolish Villain B makes the house private and begins to claim I hacked into a private house and will be banned.

Presumably, these two liars seem to think they’re the first people ever to be robbed and think they can fool the mighty Game Masters of this world with their lies. 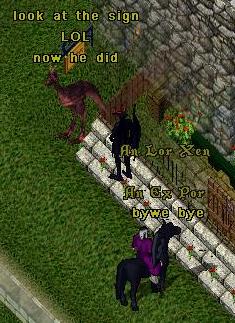 Of course, we all know how absurd it is to think the King of Thieves will be banished from his own realm by his beloved friends and companions, the red hooded Game Masters.

Foolish Villain B attempts to confirm that I am the proud new owner of a box of mysterious contents. The interrogation doesn’t QUITE go as he’d hope. :p

I flip the script and ask why stealing from fools and villains is wrong, see how I did that? I end his interrogation and begin my own line of awesome rhetoric?

But this line of rhetoric fails so I decide I might be willing to allow them to stroke my ego for the return of their box, no cost, just a good ego stroking.
Truthfully, I am fully aware it could take hours to successfully get this box out of here without being in stealth and being able to walk only a step every few minutes. I figure an ego stroking will be less work for me and less of a loss for these two goons. Unfortunately, they won’t be fun and play nice.

The threats continue… Oh joy… I haven’t been threatened with being banned or paged on for stealing since the last time I stole something. ::FROWN::

All hope for some interesting dialogue are suddenly saved when Foolish Villain A, the increasingly less glorious CHRIS, seems to think nobody will ever hear of me or my dashing good looks. 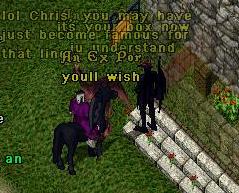 I decide right on the spot that he will eat his words and people WILL know about this.

As you can tell, they now realize that threatening me with bans will not work. Their strategy changes considerably as they now move to the “we are thieves as well” approach.

Step 1. They ask if I know a well known thief on their shard or am a member of his guild. 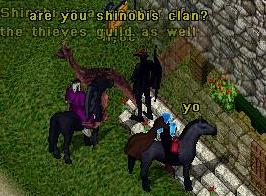 Response 1. I acknowledge I am aware of said awesome person, in this case my friend Shinobi, but decline to provide more information.

Step 2. They claim to be a thief of said celebrity thief’s guild. 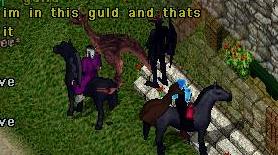 Response 2. I acknowledge being friends with said thief. 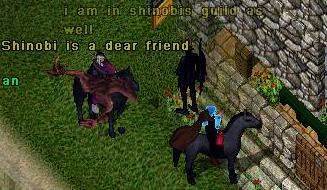 Step 3. They claim we are guild mates and demand I return their goods.
Response 3. Your guild leader may get the items back for you at a substantial discount, but you can only buy it back for 25% off.

I realize at this point that I haven’t been walking away from the house, and my trip isn’t getting shorter. So I begin to walk as a crowd of their friends arrive. 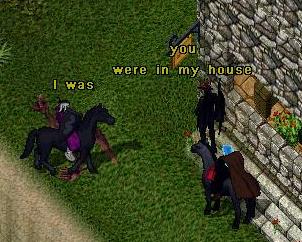 I try to inch away again… 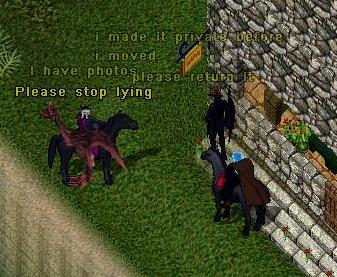 He returns to the exploit accusations and I return to making sure he knows that I know that he’s a liar. His lies just keep compounding, and frankly, It’s hard to keep track of them all.

The final question yields an answer I like. The owner claims the last box contained 200million gold in items.

I begin celebrating my latest victory before I get to the bank.

I get distracted by their latest lie, an actual, factual, Shinobi imposter that is in no way like the real deal.

He’s already out of character and speaking of the real Shinobi as another person. Now he’s just a member of his guild.

It is at this moment, I decide to try and drop the box to pass it to a hidden smurfy to carry off. It’s a brilliant plan. They won’t even expect it.

But they did… And a stealther picks up my box of awesome stuff. Was I just foiled by these utter clowns? I run away in my awesome lizard costume, head hung in shame.

They couldn’t even lie well.

And yet, they had the box, not me.