On my daily patrol of our Barter Town™ Mines, I came across another trespasser. The banner of NEW was flapping in the breeze. 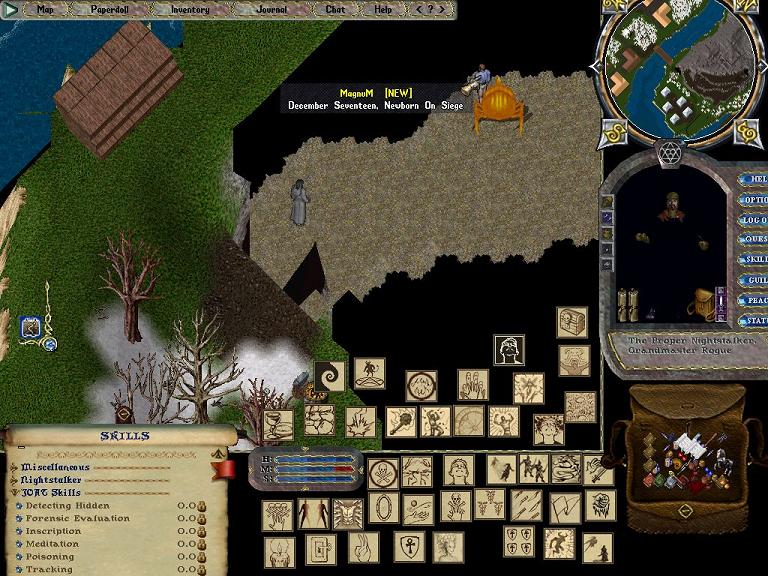 It looks like he's been here a while.... and not as NEW as he would like you to think... three different colored ore! 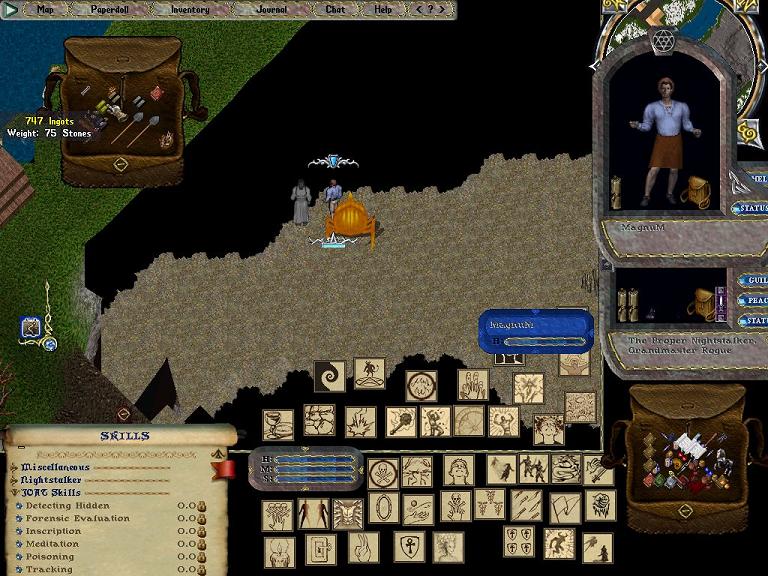 Regardless, he is flying the banner of NEW... even I went through the program many moons ago, so I'll just scare him off and give a warning... 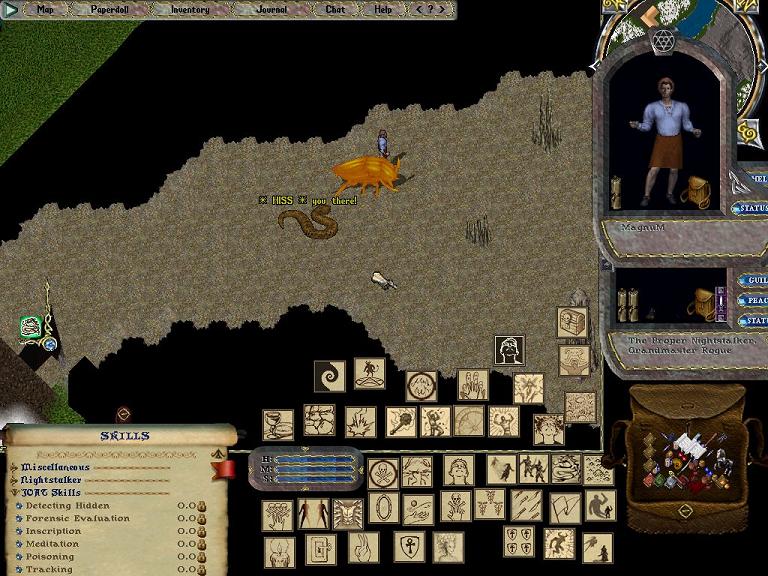 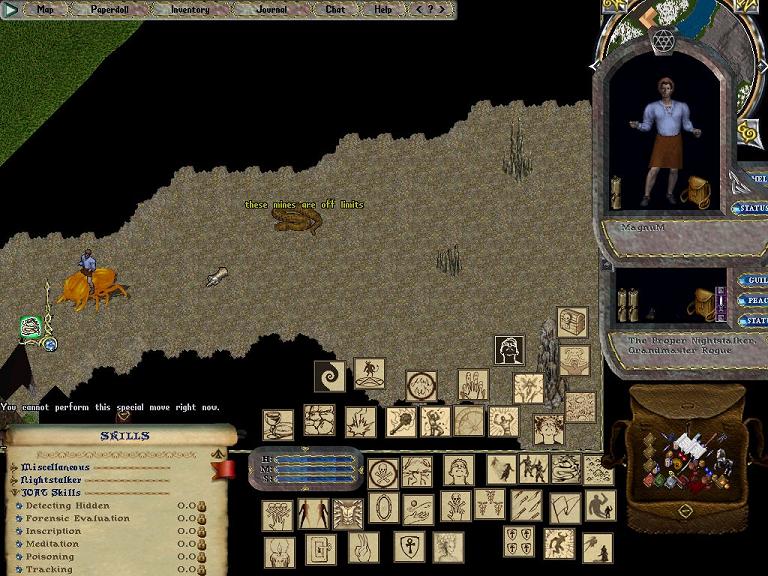 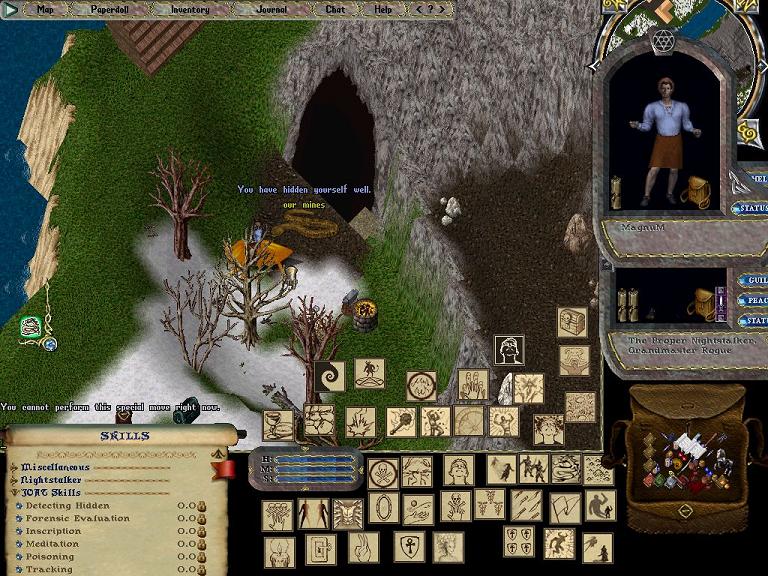 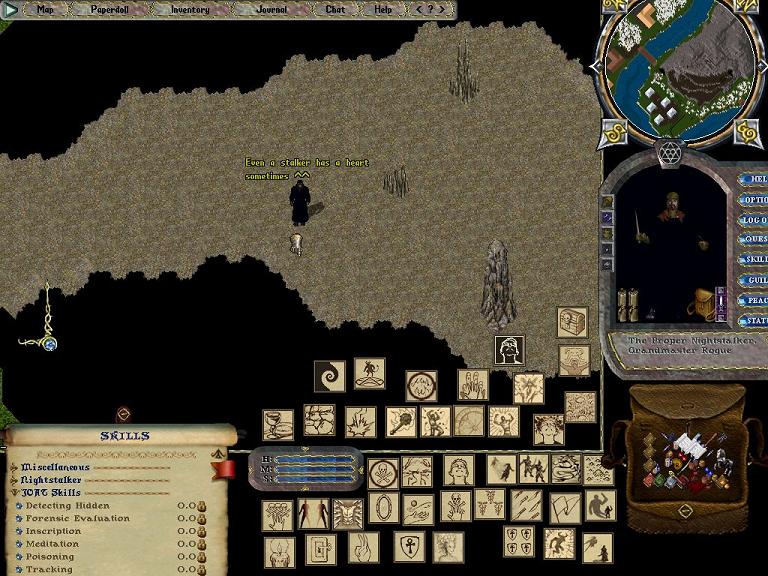 I gave him a fair warning, and he took the opportunity to leave. Surely the talking snake bit put him off... surely I can never expect to see his face again around these parts! Surely he ran back to NEW headquarters and told them of this days adventure, and he was sternly warned not to return...

*sigh* The very next day, while making my rounds. 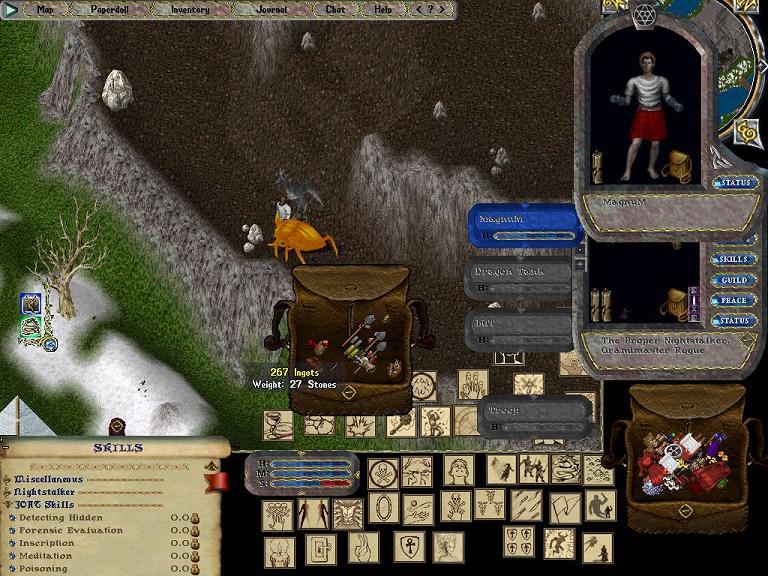 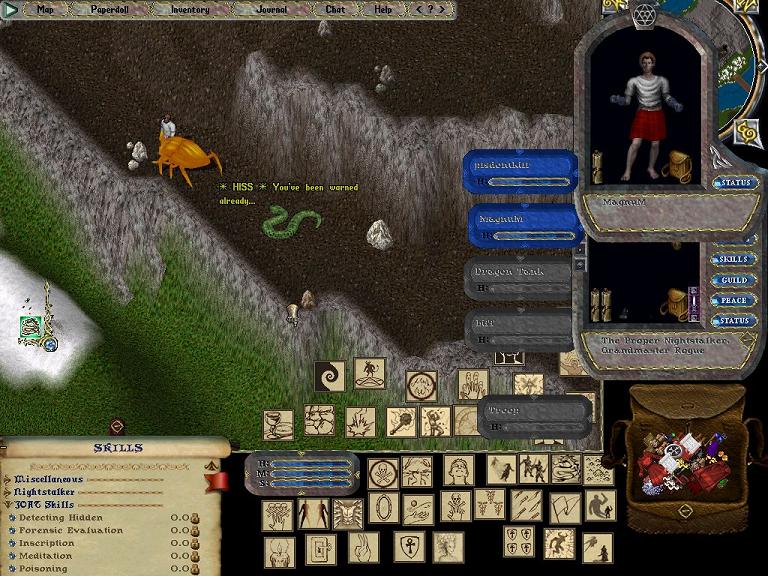 I give him the ol' talking snake bit again, but this time I was ready to strike... fortunately for him, and I'm sure he was well aware, he was standing in Guard Zone, and my backpack was too full to risk getting whacked... I let him run past me... for his sake, I hope we don't meet again.

What am I doing? I am a hardened killer! He had precious loot to be had, he was mining OUR metal off of OUR property... have I gone soft?

I became ill at the thought. I checked in to The Britain Inn, and paid thirty gold pieces extra for special medical care. I was pacing back and forth in my room, feeling faint... I didn't even feel like stealthing down to the kitchen for a free snack.

Day became night, five times... I felt my muscles begin to weaken, I had lost seven stones of weight. I was becoming mad, every knock on the door would cause me to draw my dagger, and every time it was just the Inn keeper coming in with a cool damp rag to put on my forehead.

I thought of sticking my dagger in his back as he turned to leave the room, thinking it would make me feel better, but I didn't even care to bother... my career was over.

The next morning, I could hear the music of a bard in the street, he was playing terribly... a bird crashed into my closed window because of the discord, and fell to the ground. I peered out into the bright street, and watched as the bard put away his lute, and plucked the feathers off of the bird and carried it's corpse to the butcher shop... it was simple, barbaric, and effective... and THAT's what I've been missing.

I quickly dressed, slid down the banister, and tossed the Inn Keeper a pouch of silver coins. He nodded, wearing a smile, and called for housekeeping to freshen up my room.

I didn't bother to cast a gate, I ran to Destard with vigor, and found a puppy all alone in the dark. 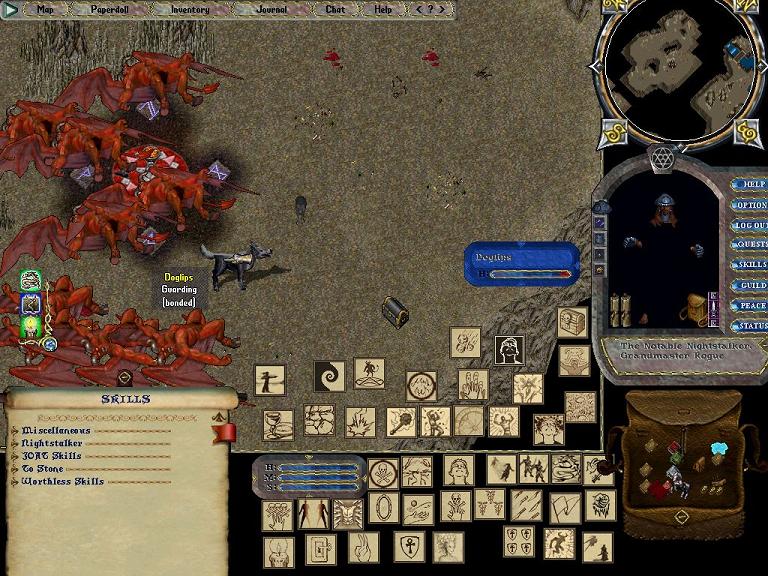 "Hey little puppy! Why you just standing among these corpses?"

What does he see that I don't see? I use my bountiful skill of detection... 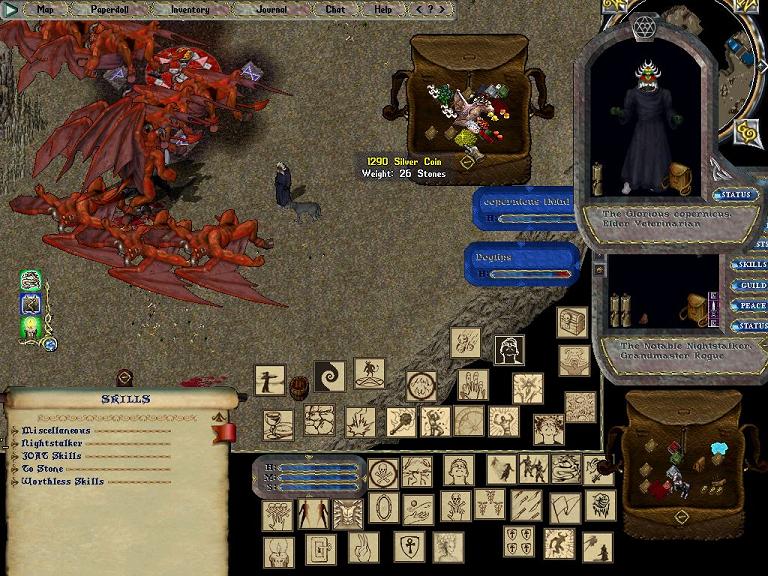 And my dagger thrust through flesh like never before! He wore a stiff frown as he fell, and I couldn't help but smile. I am BACK! Gone are the days of fair warnings and mercy!

I had his puppy follow me to meet a friend of mine... 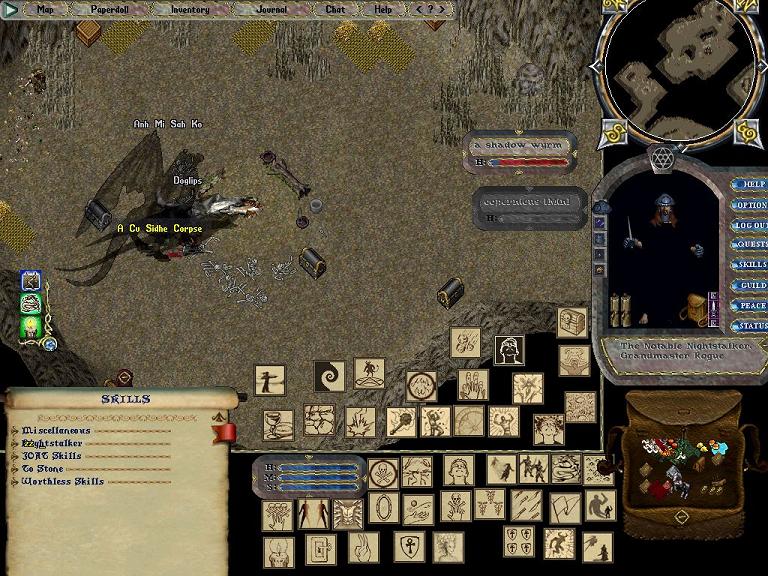 All was looking bright once more. I skipped all the way to the bank, and then, on my way home, while headed through Minoc, I heard a strange sound coming from one of the houses as I passed. I knocked on the door, but nobody answered. naturally, I turned the knob..." Hello ", I called, as I walked in. Two llamas spit on my shirt as I entered, so I thrust my dagger in them. The owner was standing there, he didn't say a word. Was he so scared that he couldn't move? I mean, it's not every day that someone lets themselves into your house and kills your llamas. I stood there a moment, I walked around him, he didn't flinch, he didn't blink. 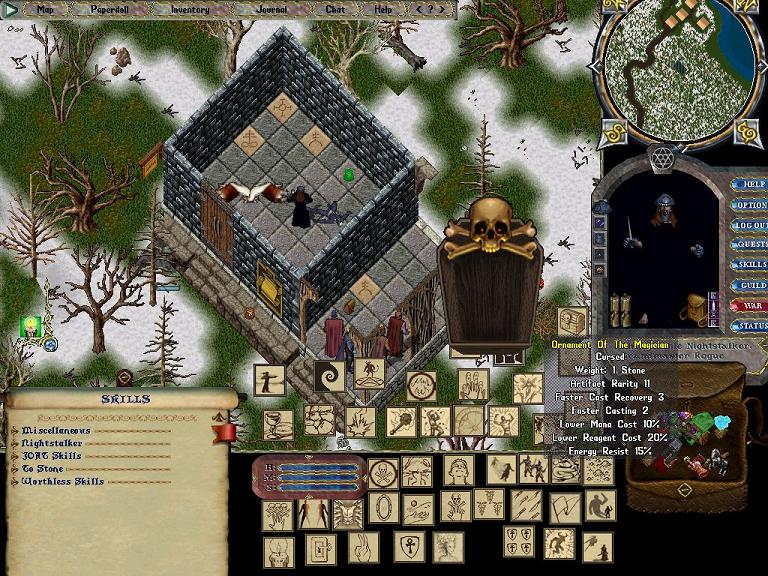 I do what I do, why do you judge me? I don't judge the way you pour water over your plants!