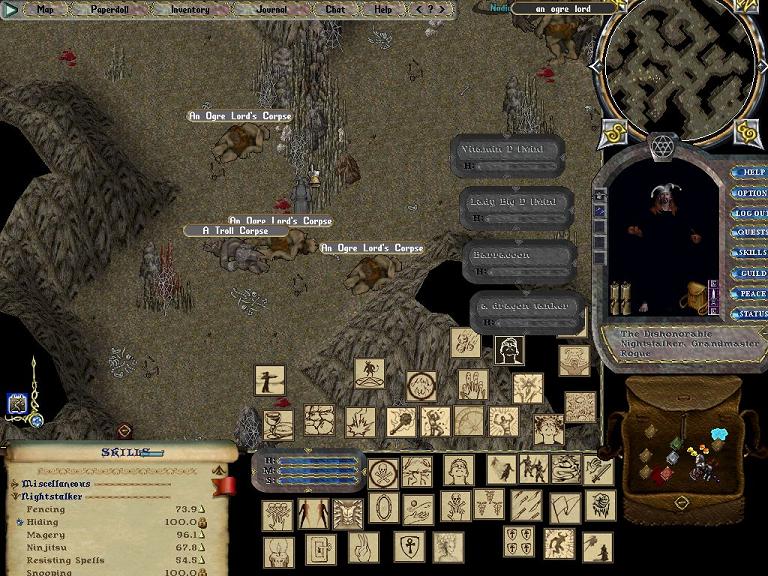 Dead Ogre Lords! Who is so powerful that so many of them lay clumped together? I will need to be careful as I walk forward. 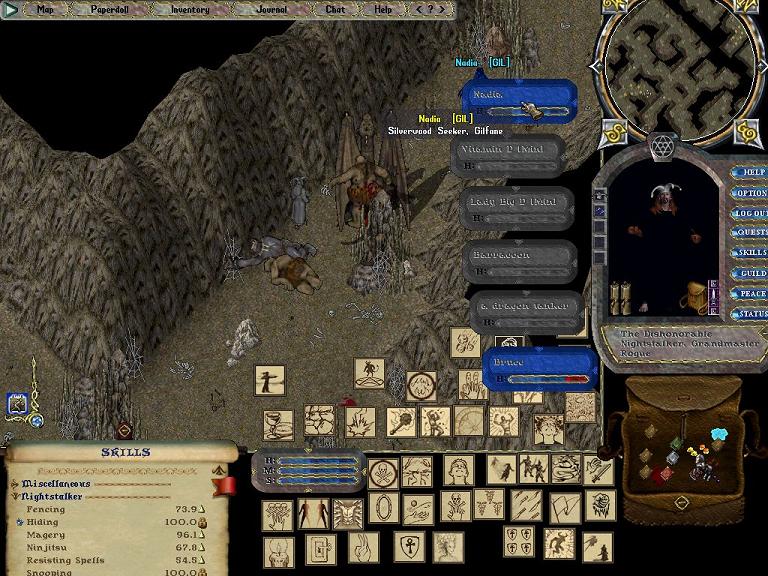 Gilfane! My sworn enemy! They represent everything I stand against, they follow the light, and I walk in the shadows. I haven't forgotten my encounter with them on Ice Island, and dragon or no dragon, this one will pay for it!

I follow and watch for a few minutes, then summon pixies to do my bidding. Sure I would rather stab her myself, but she has a dragon that kills Ogre Lords with ease... I'm not stupid.

I send the pixies in her direction, and they giggle with delight as she swats at them with her open palms. They dodge, roll, mock and stun, then dance on her corpse. 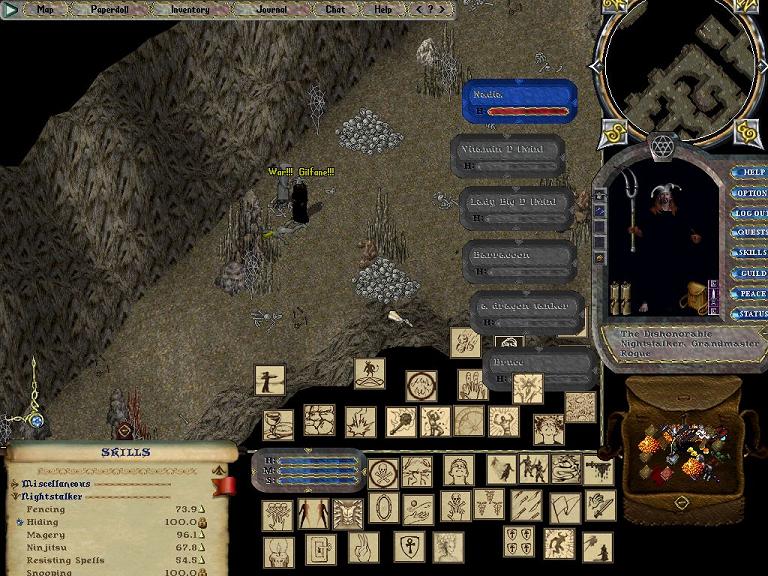 I cry out in the dark dungeon, my voice echoing in the corridors. Some bats start flapping about, and my pixies go after them, "Dinner time", they chant.

I take everything, and head home.

One man against an entire guild... it doesn't seem fair, but they had it coming to them! *grins*

A few days later, as I was making my rounds, I came across another tamer, who normally leaves their dragon killing things while they sip their tea, sleep, read the Britain News, or whatever have you.

This time, she was actually with her beast.

I snooped her pack as she opened the door, she couldnt push through me, so she teleported to her "safe" place. 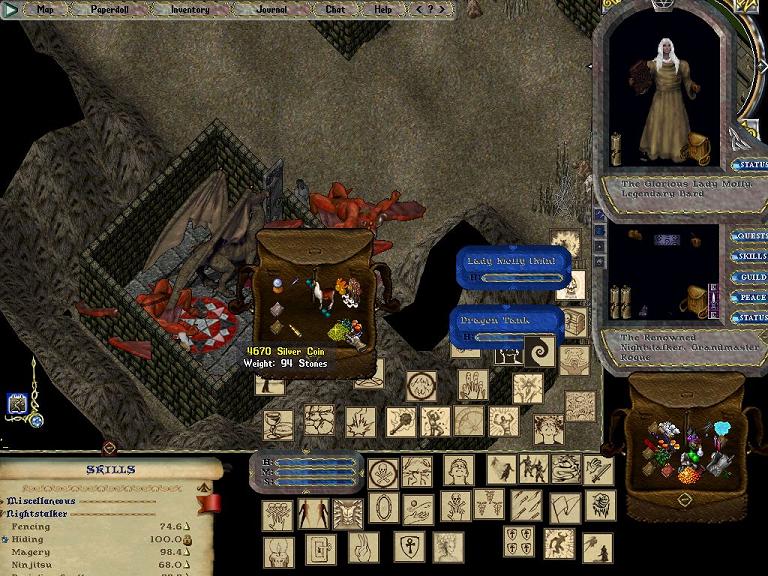 "Ha! You can't get ME Nightstalker", she cries out while casting invisibility on herself.

I play along, and pretend with her that she is safe there. 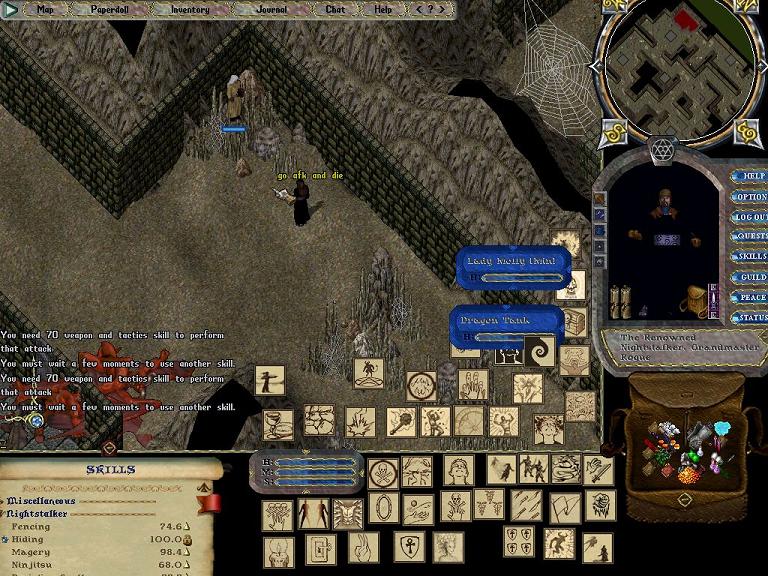 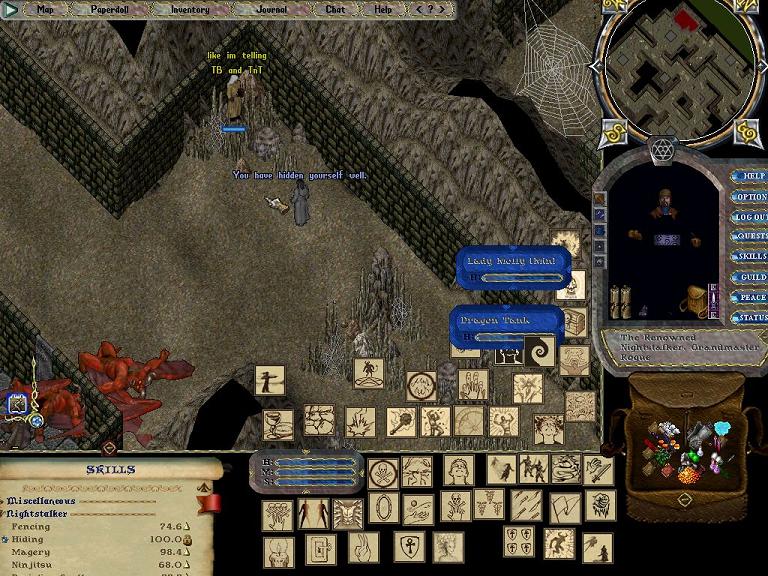 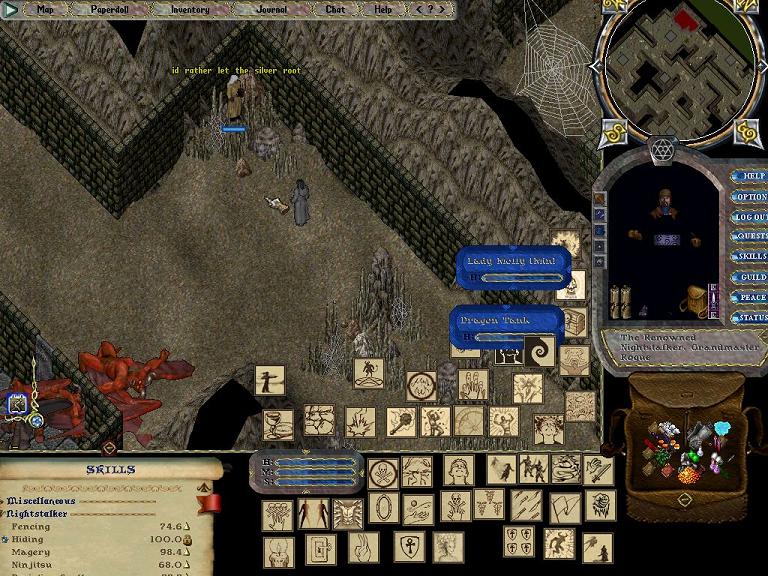 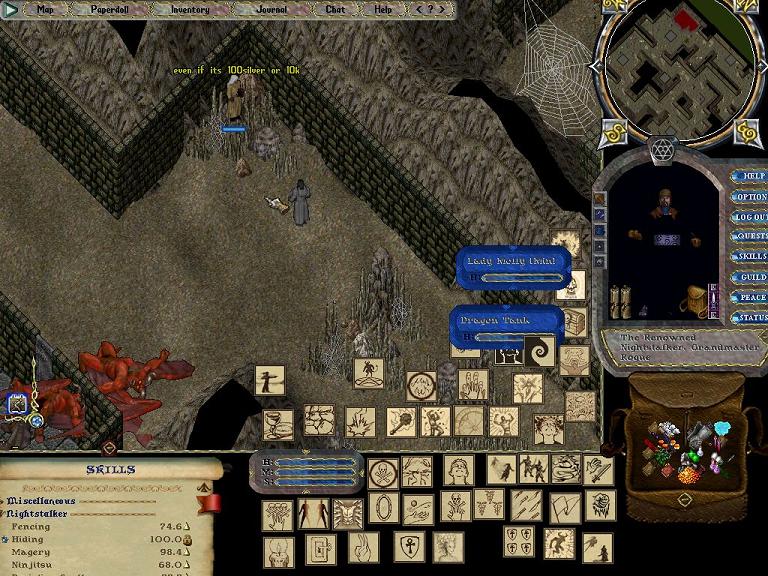 Root? What?! Silver doesn't have roots... I assume she is speaking in code, and listen on. 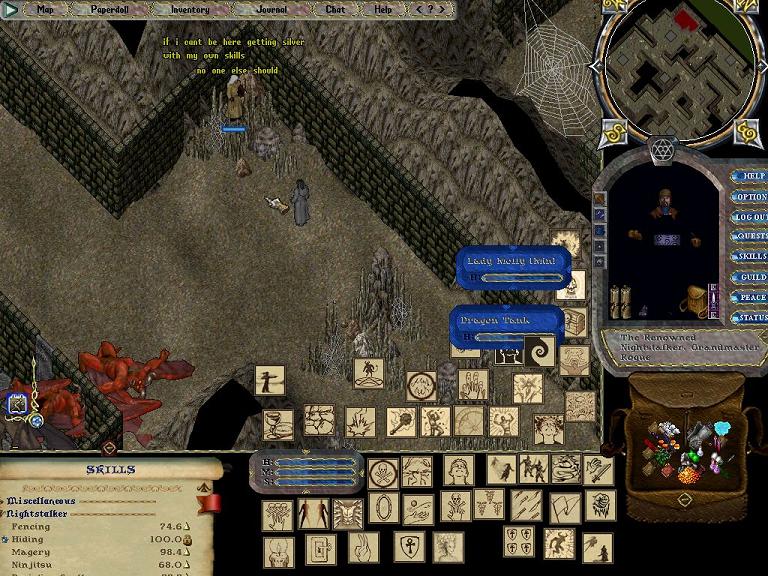 I agree with that statement whole-heartedly! 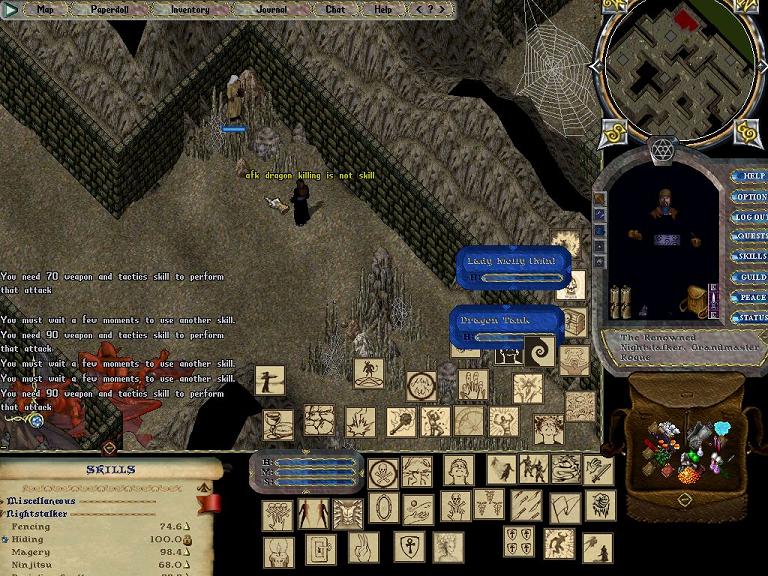 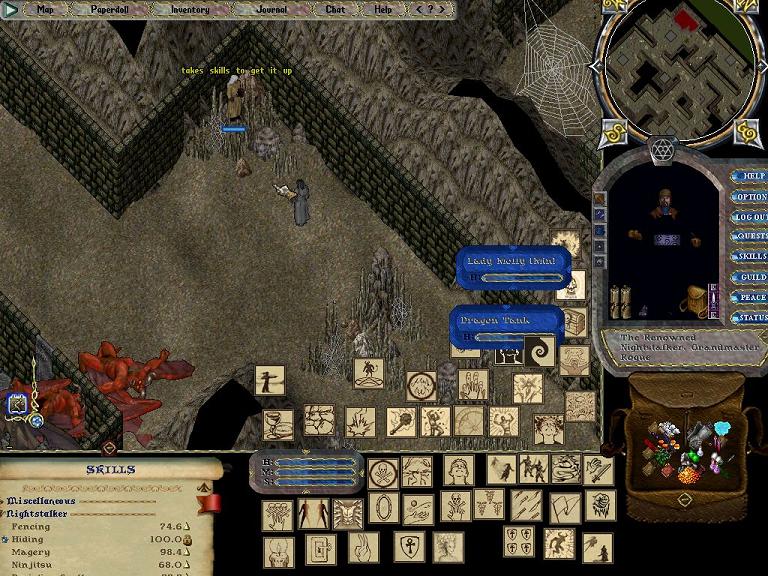 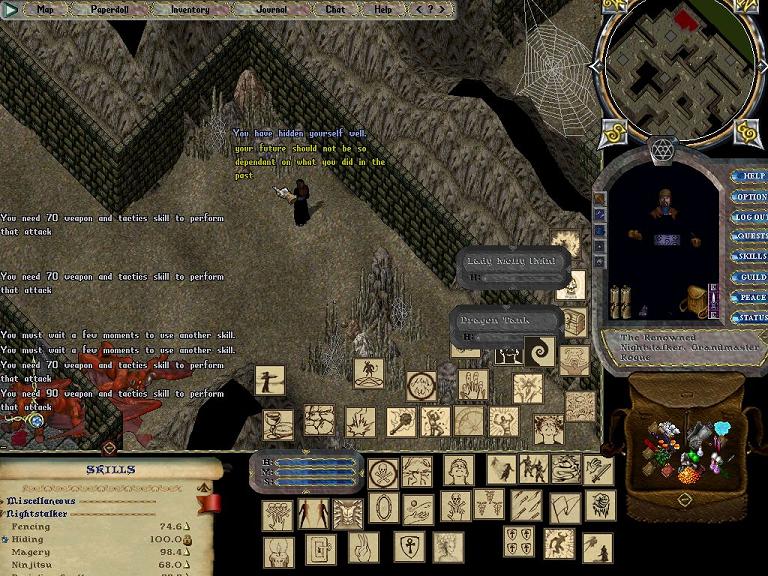 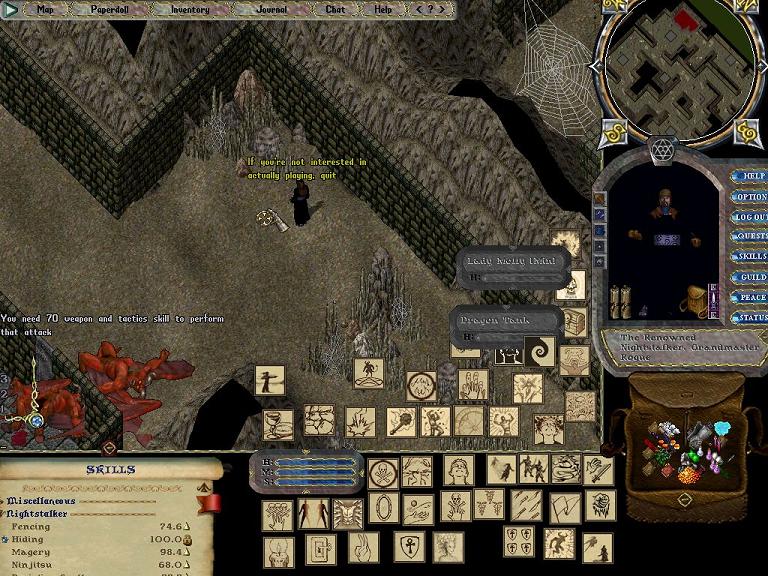 I lectured to her, then saw her no more. I wondered why a pet would bond with its owner, if its owner never spends any time with it, and only leaves it in dangerous places to fend for itsself. I know *I* wouldn't bond with anyone who treated me that way. There is no skill involved in leaving your pet in a dark dungeon, while you hide in the rocks. You will die as many times as I see you Molly, you are a disgrace to all the tamers of this world, tamers who actually care about their pets, and don't just use them as a tool...nay, a slave tool.

If you're not *there* with your pet when I find you, don't complain when you have nothing left when you return.