Truth be told, I think the biggest achievement of Barter Town to date is that it was able to survive without me. The town has gone beyond both me and my guild. I suppose the history of the town can always be traced back to me, but it's nice to come back to Siege without having everything on my shoulders -- as if it were a job. I have zero interest in getting the tower back from Ladra and I have zero interest is mass recruiting new thieves into the guild. If any thieves are out there looking to give Siege a shot, I would suggest the Barter Town Inc. guild as a nice place to land.

There I was, minding my own business, when I was rudely interrupted by the latest master of verbal flatulence, Hand of DooM. For one week straight, ever since I came back, if there was one constant with Siege Perilous Global Chat, is that you can always count on Hand of DooM running his mouth at someone. 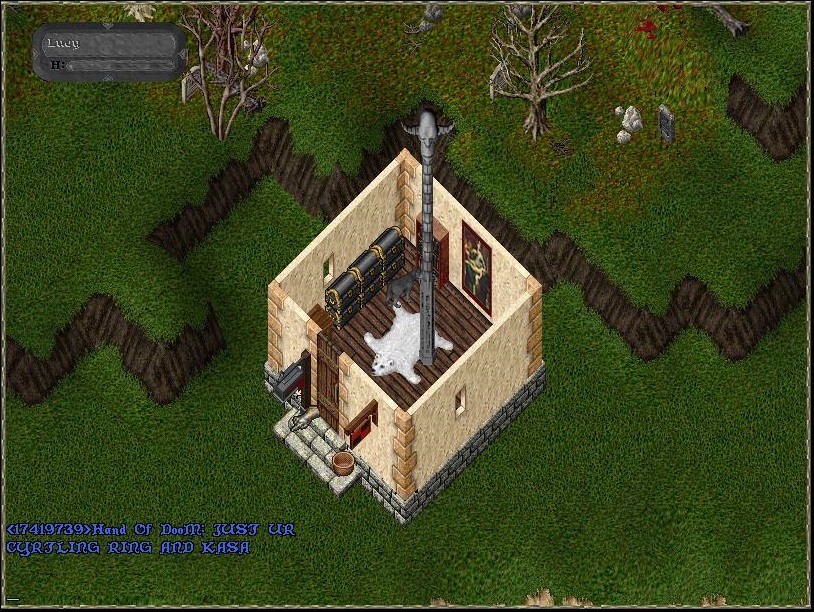 This guy really loves the smell of his own fart.

And as far as I can tell, Hand of DooM is basically the new Diablo of the shard. 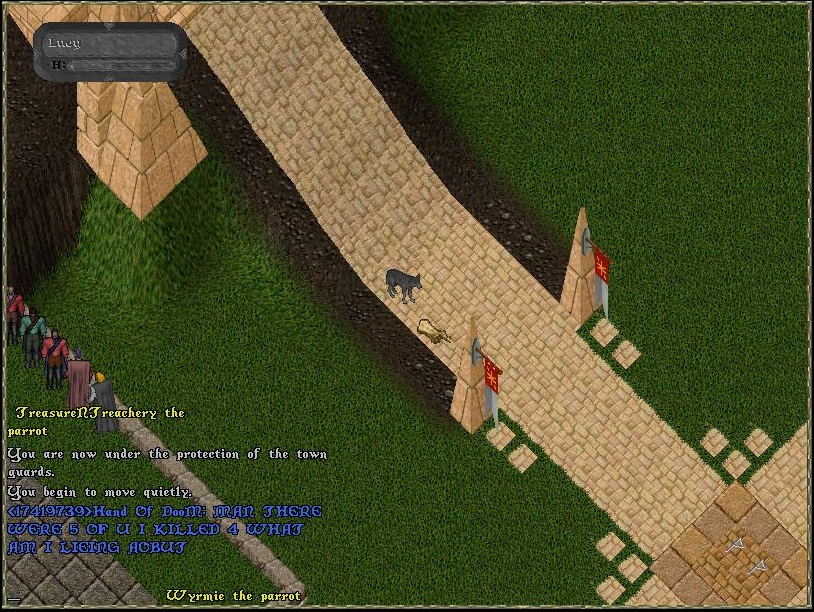 The good news for me is that the more they talk, the more information they give up to me freely. Somewhere out there 6 people were fighting and at least 1 of them was over loaded with an abudance of loot. I go for Luna first and information continues to vommit out of his mouth for my benefit. 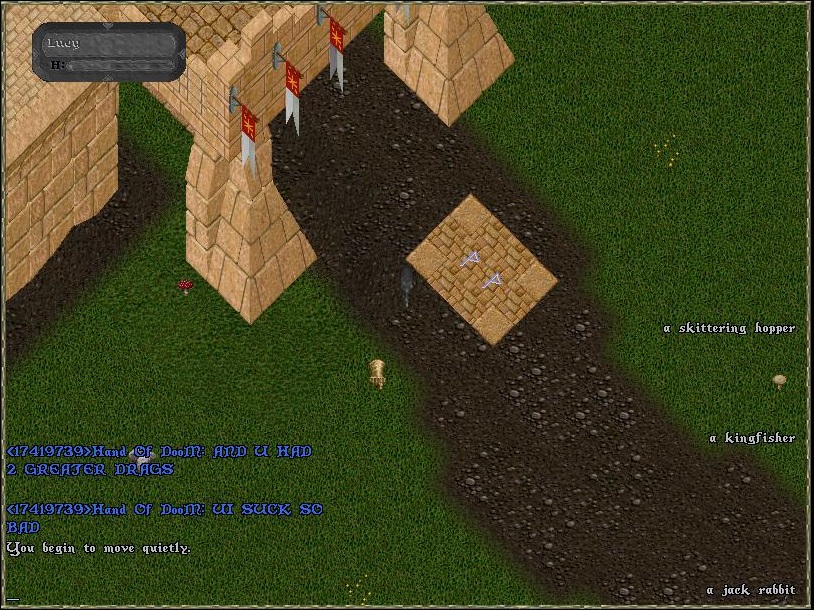 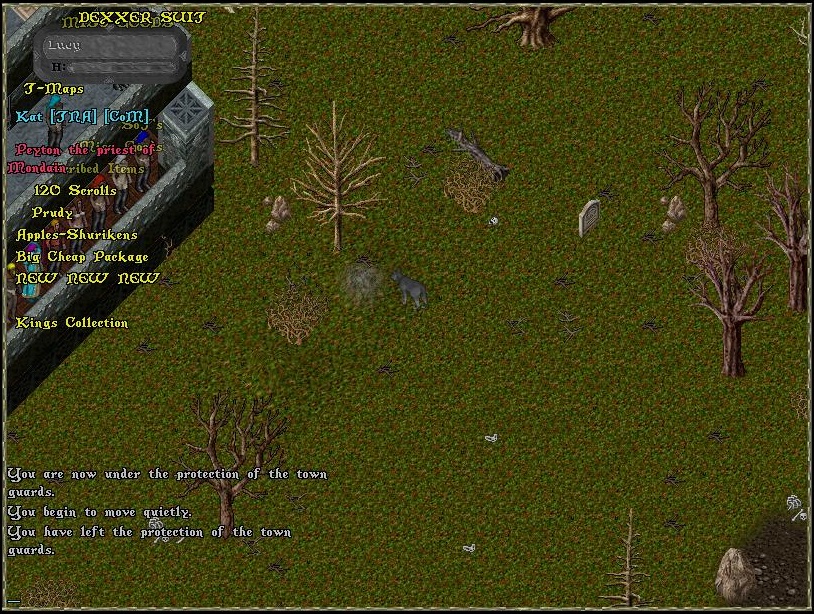 Kat was at the TnT Yew Vendor House and then *poof*, she's gone. But it wasn't a moongate she opened, it was the sound of a teleporter that whisked her away.

I was hot on her trail and it was becoming increasingly clear that TnT would be my primary target and Hand of DooM my secondary. Back through the Yew moongate, I exit Umbra, and head Southeast toward the TnT occupied territory of Stonehaven. 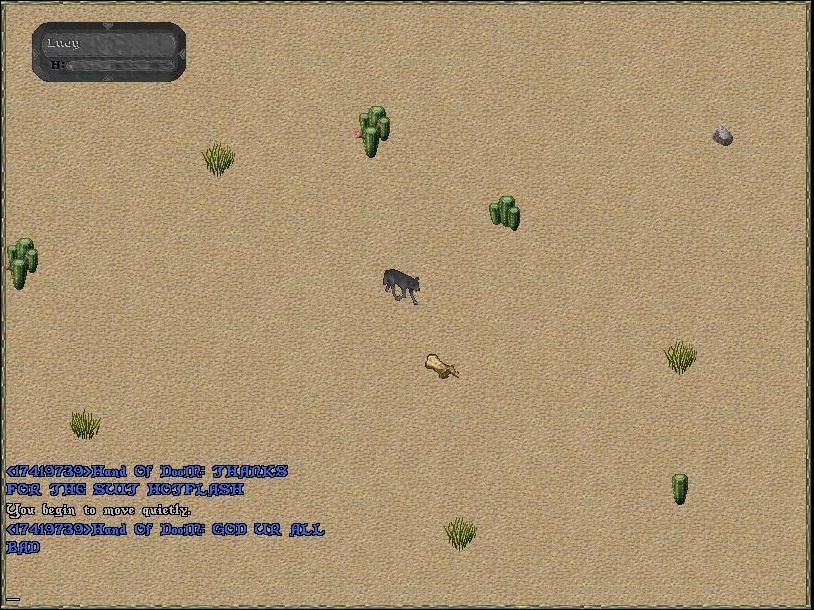 (This guy really loves the sound of his own voice.)

It's been a long time since I've set foot in Stonehaven. In fact, I've only ever been here once before, way back in Episode 159.

It doesn't take too long before I find Kat locked away in her private home. 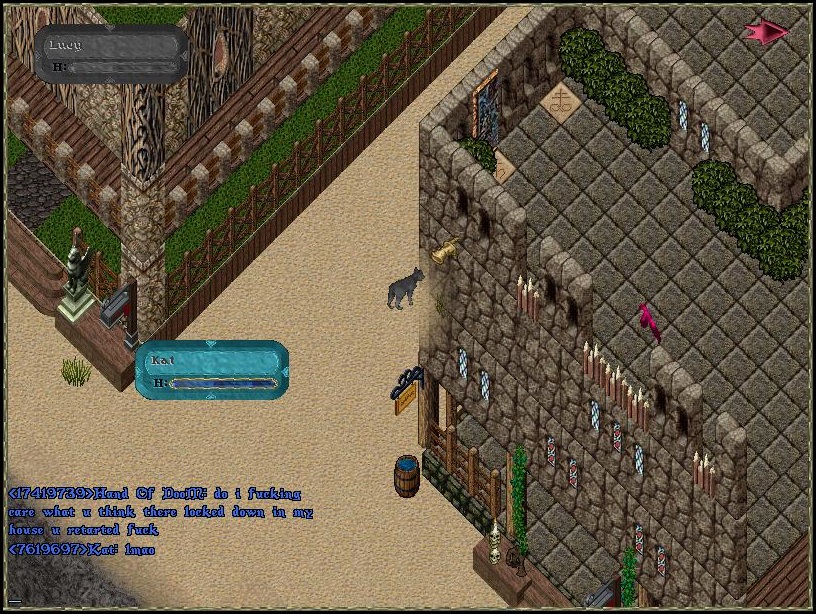 Diablo -- I mean, Hand of DooM -- goes to sleep, and a few minutes later *poof*, she's gone again. But this time it was the sound of a gate that whisked her away. And here's where a little more deduction is in order. If I were Kat, if I had 4 other late night friends, and if Hand of DooM was no longer around, where would I go?

"To Despise!" He exclaims with great relish.

And right where I knew they'd be, I sneak in closely from the left. 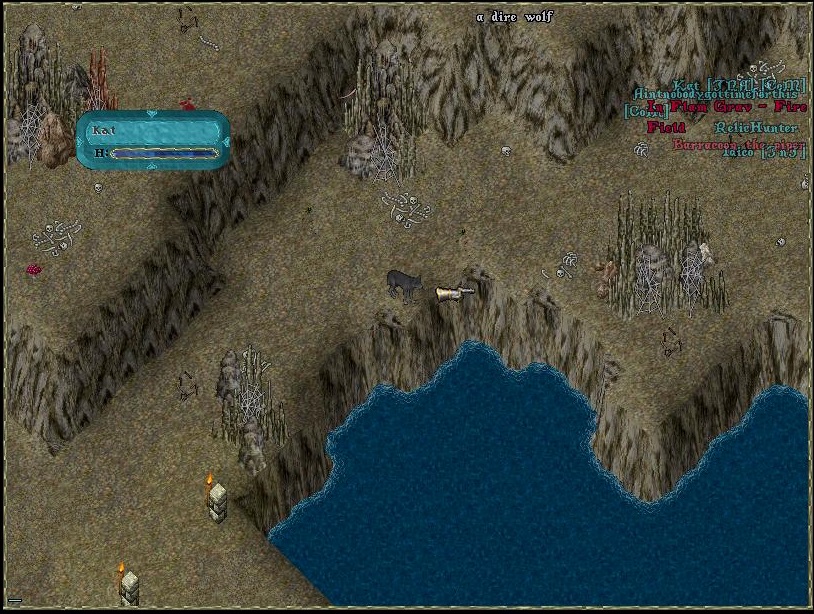 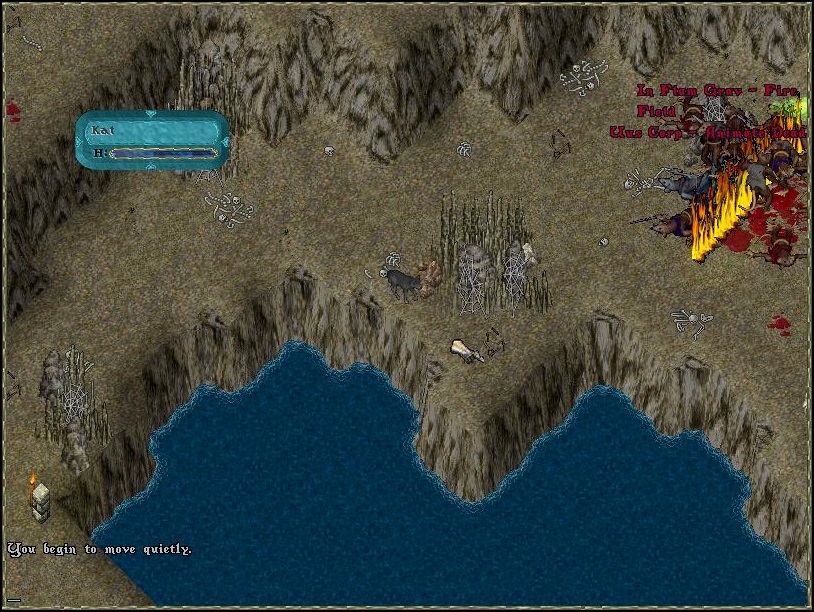 Just a little closer and...

With Kat on Barracoon, I step on one of the invisible people and my cover is blown before I even get started. Shiver Me Timber shows his face up top and the picture becomes much more clear. 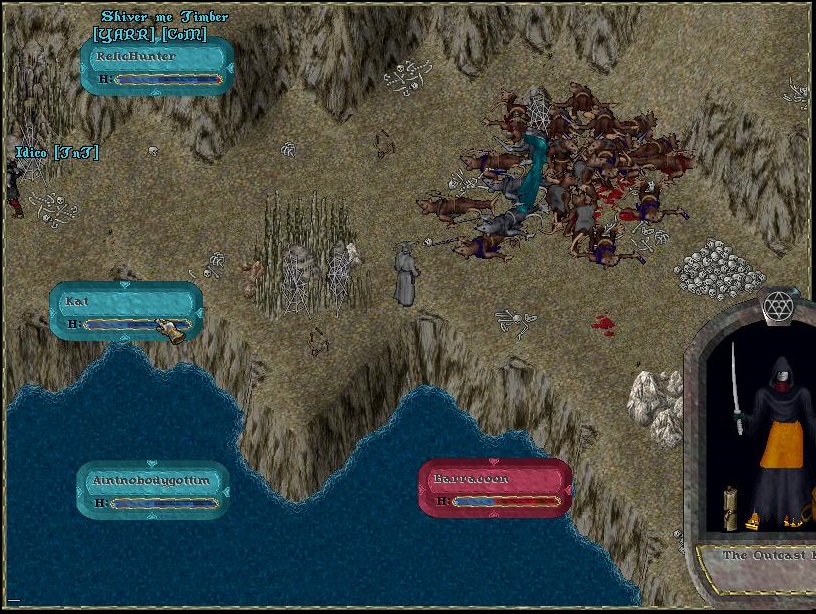 They all knew I was here, but with 4 blues I decide to hang around for the chance of getting lucky. Kat and Idico's dragon were on Barracoon, Igg was stealthing right behind me, and Shiver Me Timber was protecting up above.

The plan was simple.

My best chance of something juicy would be from Kat. If that fails, my secondary target would be Idico who think only has hiding and no stealth. If that fails, I could break for Shiver Me Timber if he hangs around just a little too long. And I would likely have no chance at Igg unless he gets a little too careless.

Barracoon falls, Shiver Me Timber breaks for the star room, Idico preps an "all kill" with my name written all over it, and one shadow jump later, I get into position right in the middle of their merry little band to maximize the chance that Igg would step on me while collecting gold. 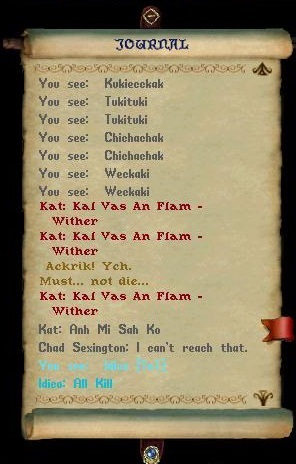 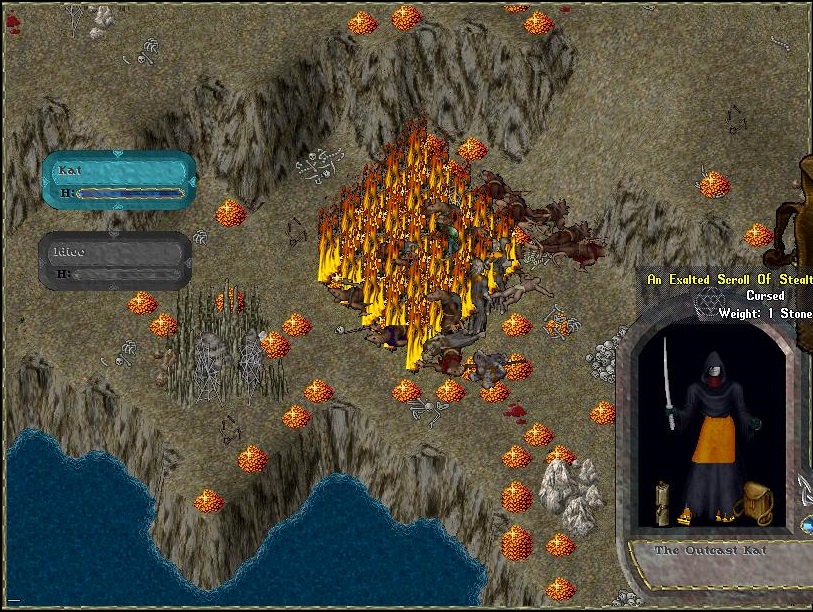 I help myself to a 20k gold donation and watch them all leave one-by-one, with Idico bringing up the rear. I give chase in hot pursuit. 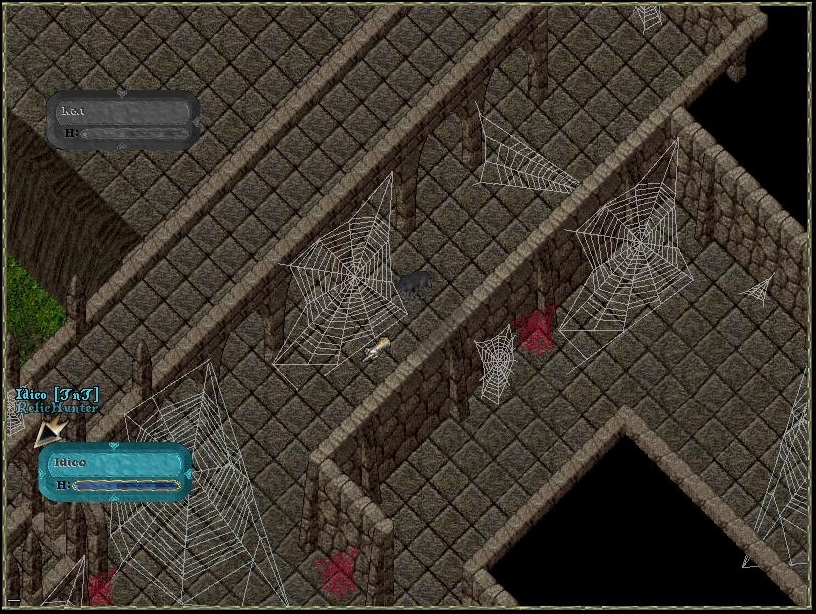 I pop his pack in the star room and *poof*, he's gone.

I follow him back to the TnT Luna vendor house, but we both know that I'm way too late. 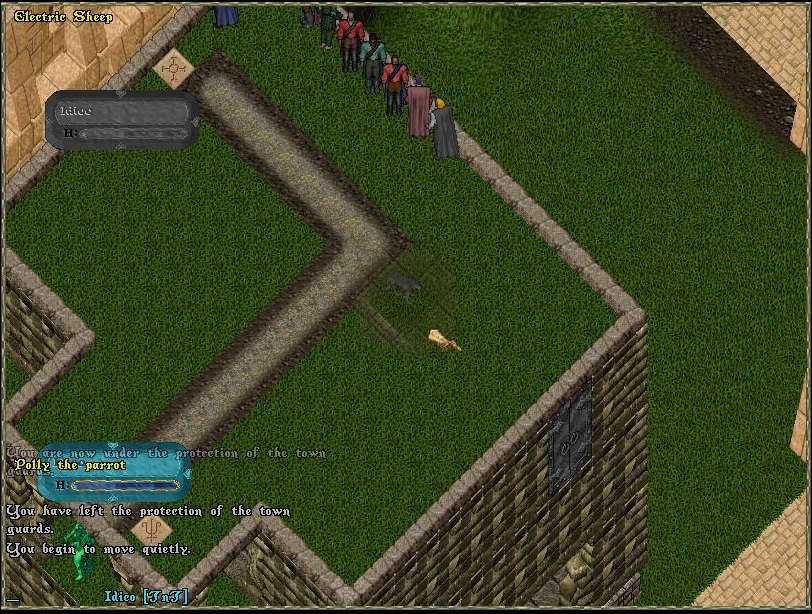 I head back to Despise in hopes they would do at least one more spawn before calling it a night. 15 minutes pass and I head to bed myself...

...Besides, tomorrow was the big Gilfane auction and I had high hopes for snagging something good.

I make my way to Luna to catch one of the event gates to New Gilfane (now located outside Skara Brae) and I walk halfway into a curious conversation between Illusion and Zalfein: 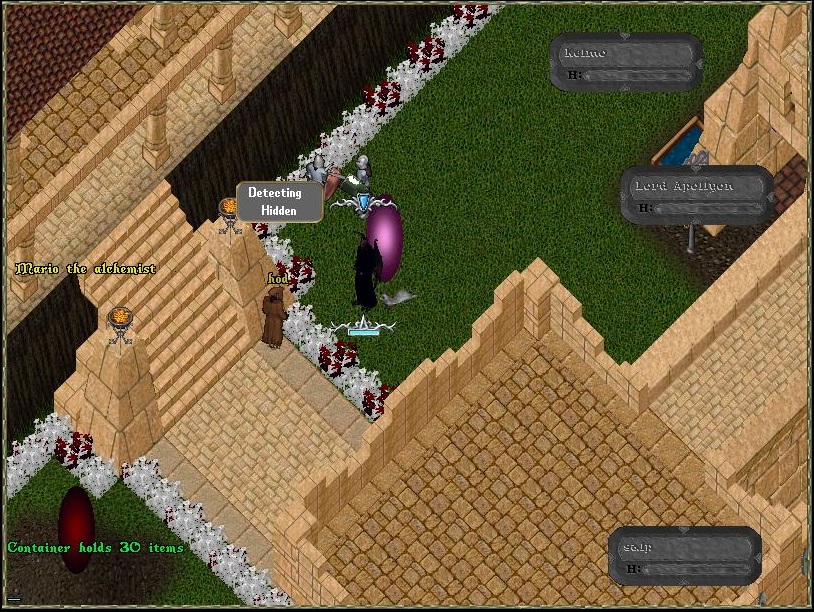 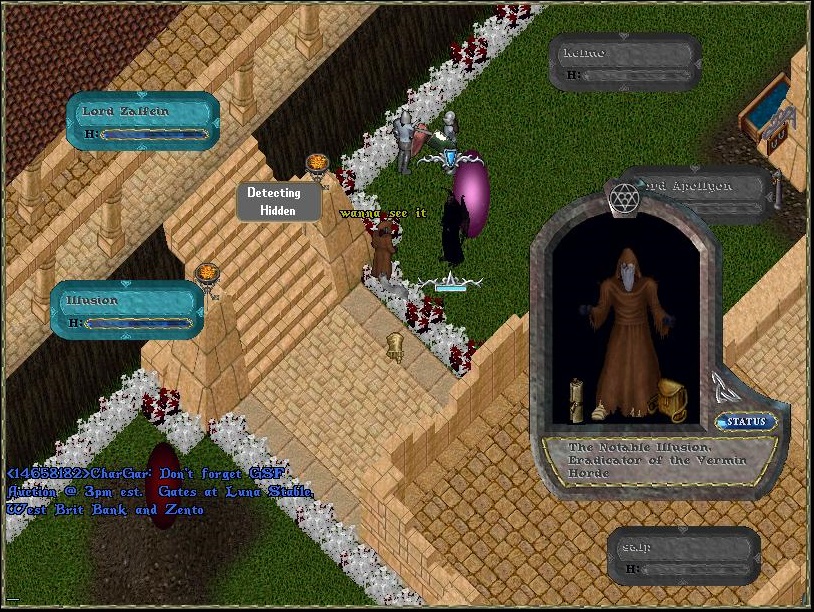 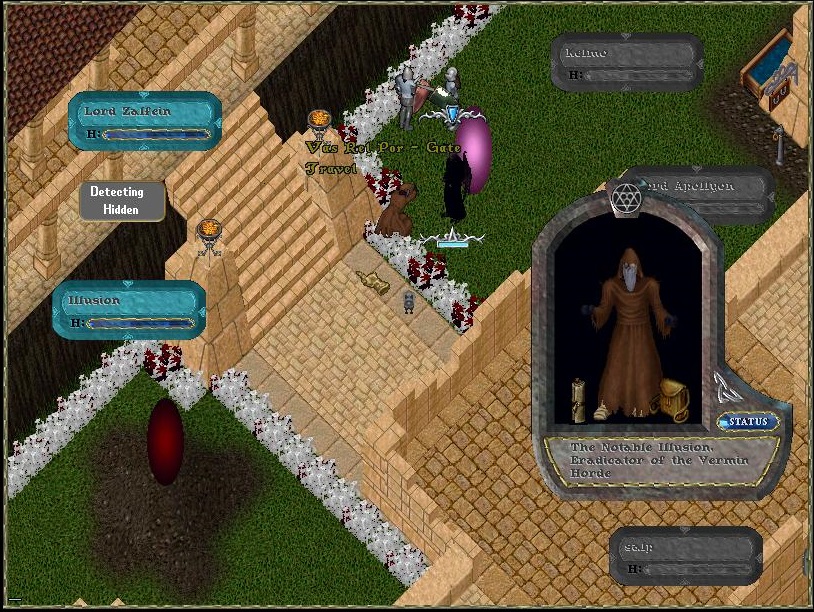 (Wanna see what? Where?)

Illusion [Min] disappears through the gate and a few seconds later another gate opens with Hand of DooM [CoM] popping out the other end.

Ah, my secondary target from last night. Must be my lucky day. I pop his pack open as he runs past and spot a kryss in the top right of his pack. He stops at the bank and I stop right behind. I snap into ferret form, get into position, and take what's rightfully mine.

I don't go grey and bank my new kryss immediately.

Hand of DooM takes a couple steps away towards the gate, notices his missing major magic kryss, and finally noticely my tiny ferret body. 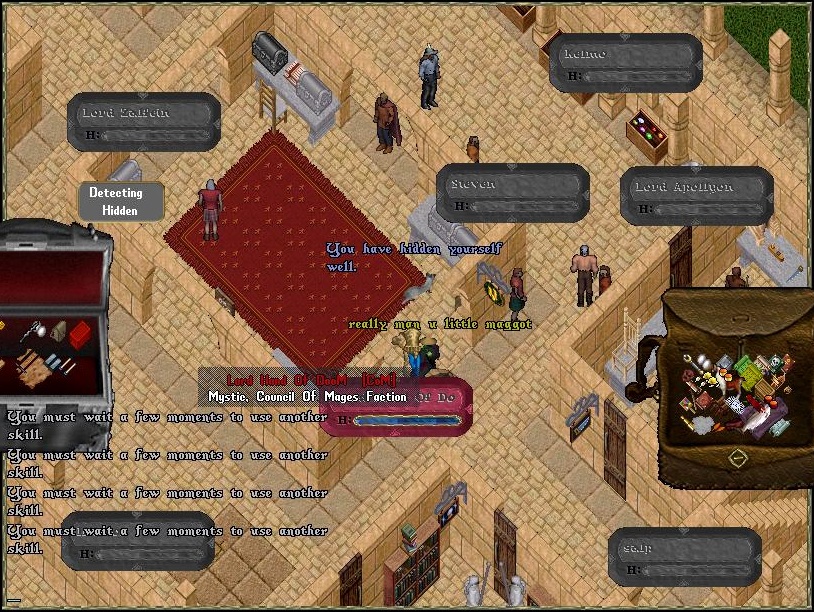 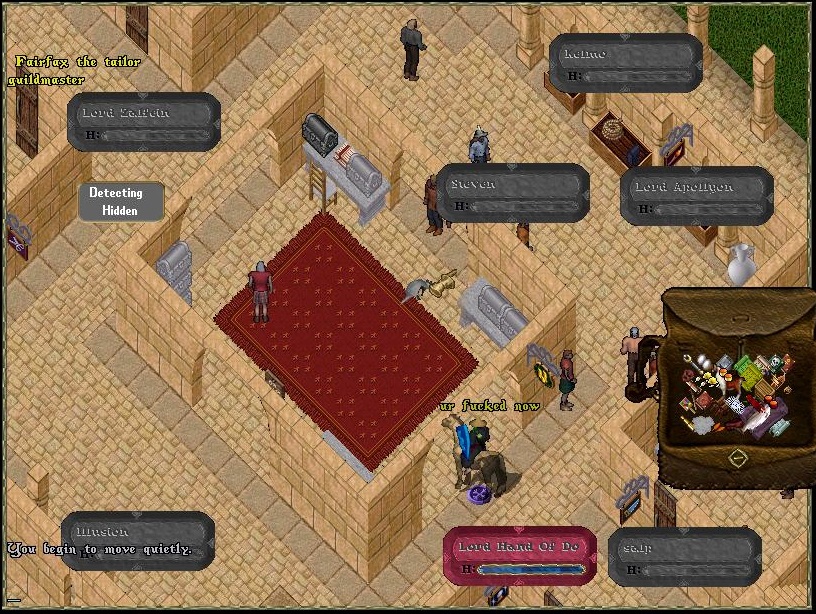 I head over to New Gilfane with my new kryss proudly equipped. 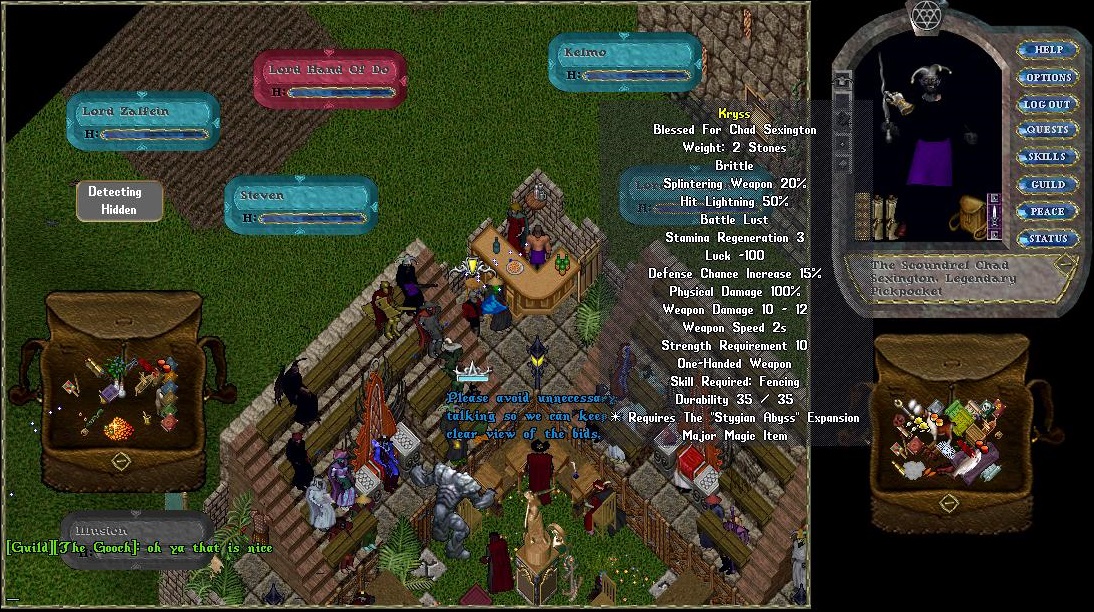 Both Hand of DooM and Illusion are in the crowd and it's this mystery that still remains...

(Oh, I guess that makes sense.)

(And I'm equally sure that it will never be made public.) 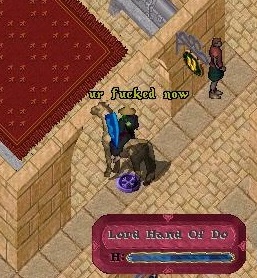