I was making my usual rounds, collecting fees from the citizens of Sosaria for the coffers of Barter Town, when I happened to notice an illegally parked ship in the New Magincia Bay! This could not go unpunished! I launched my impressive ship, bursting at the seams with vengeance, into the timid waters surrounding this overly protected town, and proceeded to mete justice! 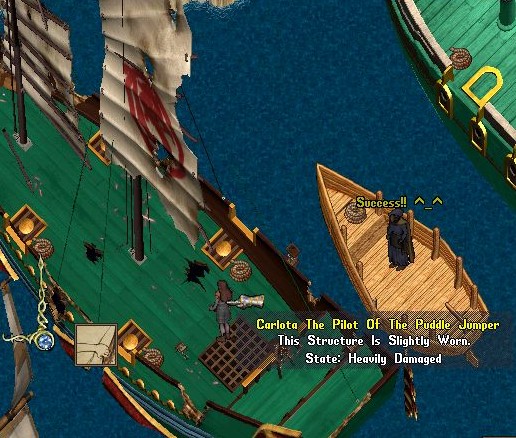 I dry docked my ship and "borrowed" a row boat from the hold of the Puddle Jumper. I cleared out over 80 items from the hold as payment for this violation. I forgot my ticket book, so I had to go back to Barter Town to get one. When I returned, it appears the offender and crew were on deck, kicking themselves for not putting another coin in the meter. I promptly placed a ticket on deck for them and they quickly noticed it. 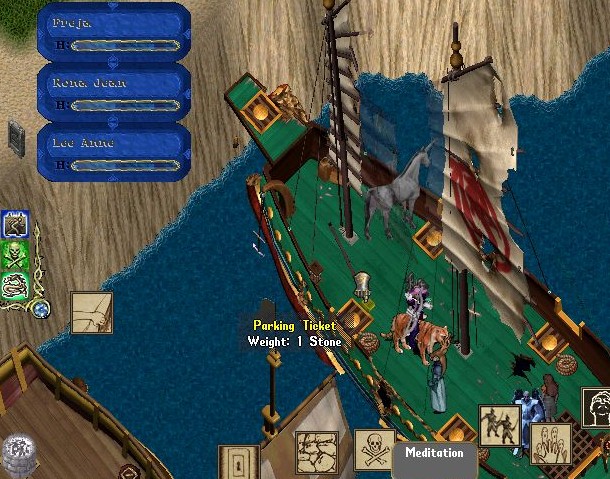 "Nightstalker", one cried, as they shook their fist in the air, having read the ticket. 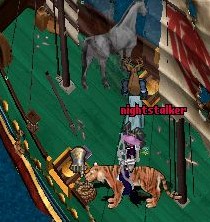 The owner of the ship rushed over to see what was going on...

The ticket read something to the effect of, "You have been ticketed for a parking violation in the Bay of New Magincia. The trial was held without your presence for your convenience. You're welcome, Collections Agent of Barter Town, Nightstalker. 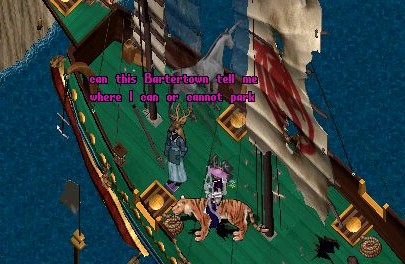 Yes. Barter Town officials can impose any fines or penalties they wish. We not only enforce the laws, but we make them as well. 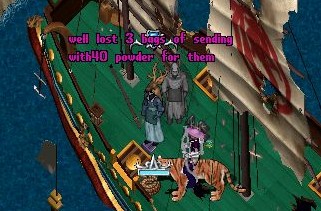 While Lee Anne listed off all the things she paid in settling her fine, I had to make sure nobody was carrying anything illegal in their packs. 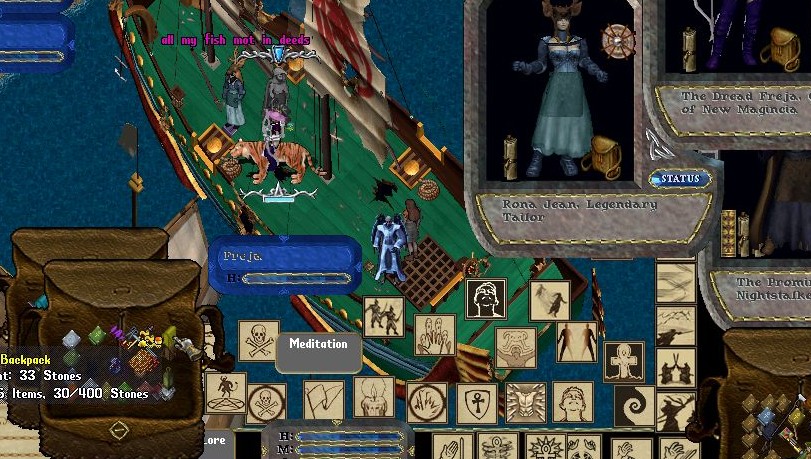 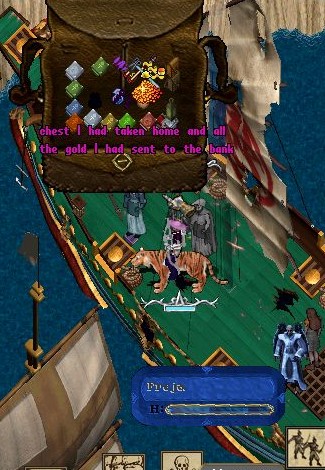 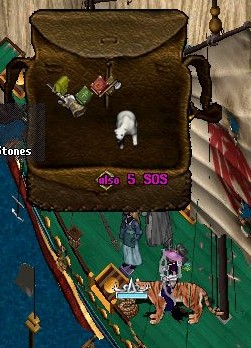 Everyone checked out clean. Freja pleaded for mercy on behalf of her shipmate, but her words fell on the ears of mirror images! ^_^ 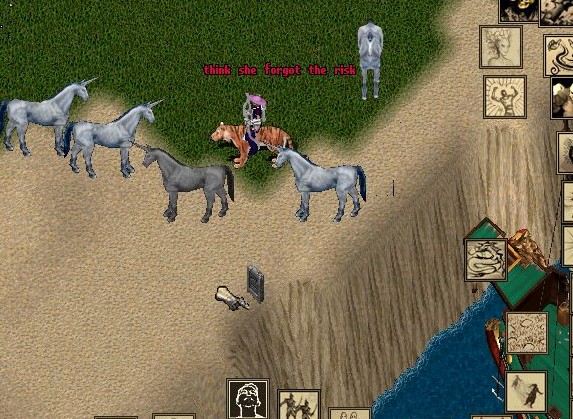 I shortly made an announcement of a new shipment of goods that just arrived from the black waters of Bucs Den, which would be sold at the shopper friendly town called Barter Town!

Just then, I saw a flyer flapping in the breeze on the towns public message post. "Notice: Free party at Skara Brae Hall. Free food and drink, games and prizes... come one come all!" I looked at my watch... it was to start momentarily! 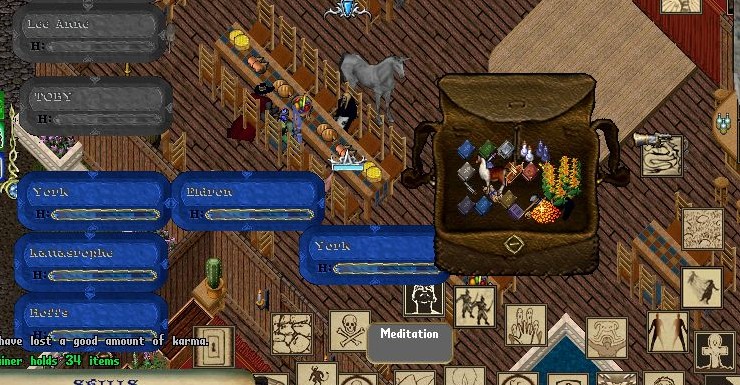 I arrived at the event and checked everyone's packs for infractions, none to be found... so I checked the premises to be sure everything was in order... 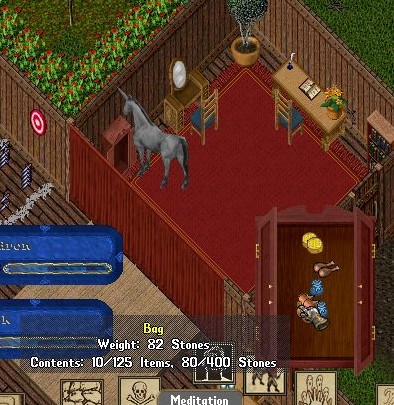 So THAT'S your game, huh?!?! Serving alcohol to minors! 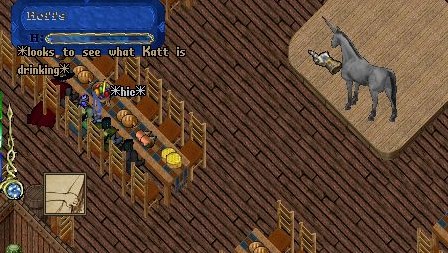 I grabbed all the liquor I could and the prizes as well! I had to put a stop to this! 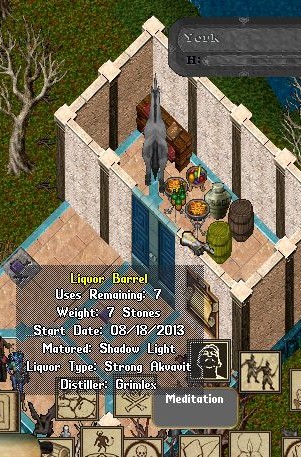 When I returned, they had produced another barrel of liquor and proceeded to play a drinking game with the a fore mentioned minor... the guards turned a blind eye to this activity, and should I measure justice within their town, I'm sure I would be labeled the criminal instead. 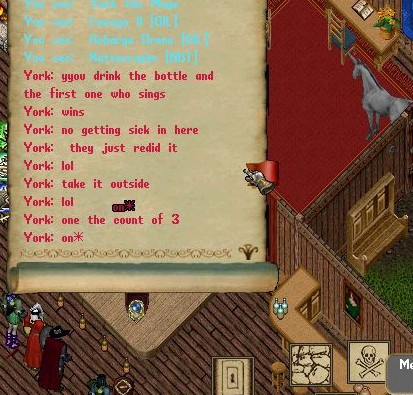 It was too late, they drunkenly retired to the brothel with their young prize, and didn't even bother to clean up after themselves. 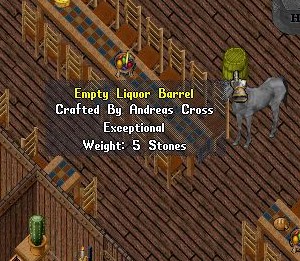 I left that scene as quickly as possible, to distance myself from these degenerates, and found myself inspecting the pack of one Black Jesus!

He had a nice dagger tucked away under a scroll... 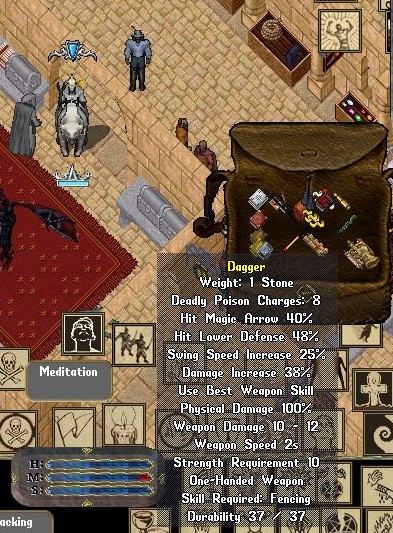 He HAD a nice dagger tucked away under a scroll. ^_^ He has been away too long, and he was past due on his taxes. I was happy to take some interest in his wealth. 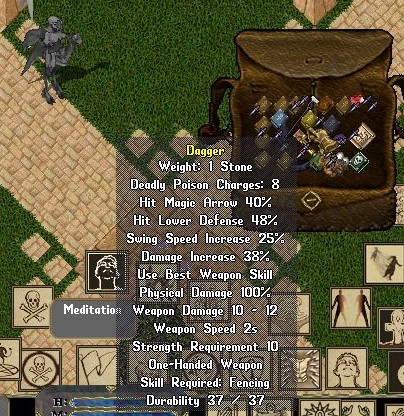 Tsk Tsk Tick... why would you leave such a precious ring in that ragged back pack... don't you fear it falling through its holes?

I shall keep it safe for you in my bank box. 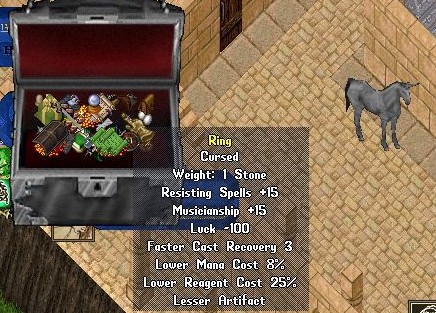 I do my best to right the wrongs of Sosaria, and sometimes the task can seem overbearing... but take heart Siege, I won't stop until my last breath is drawn...