As I was making my exit from the puzzle room in the Underworld, a dusty pillow in my pack, I was suprised to see one Dagger gallop up to the trapped floor maze. I watched and waited, I allowed her to get into the maze a bit, then summoned pixies! My plan was to cause her to panic and run for it across the trapped floor. That didn't happen.
My pixies were killed on the very first floor trap ( though they fly ), and Dagger dismounted and sent her horse after me!
The horse withstood four tiles, then collapsed when a boulder dropped on its head.

Stealthing away, Dagger was putting distance between the two of us. I quickly followed. She summoned the ghost of her horse to her, and she had resurrected it and healed it as I was arriving.
"Dammit", I muttered to myself. 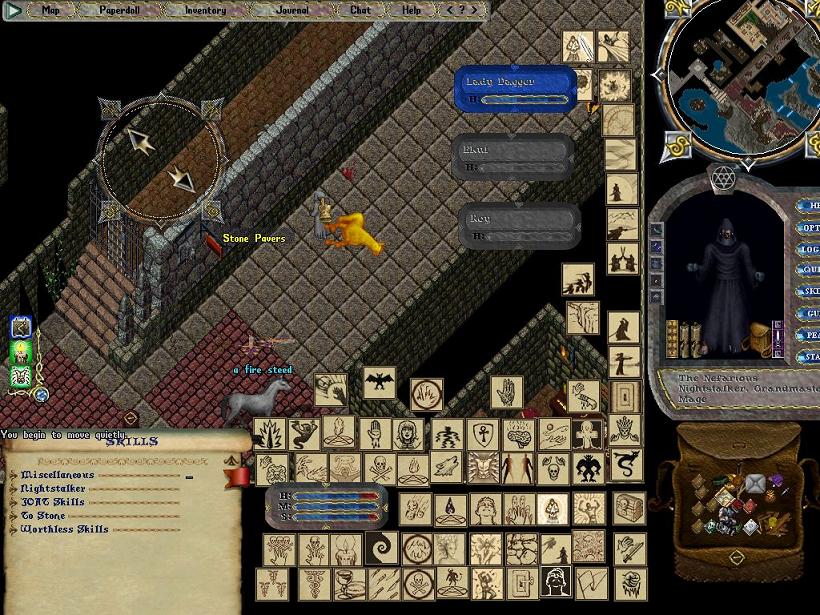 One of Chad Sexington's recruits was there, hiding in the shadows. I'm sure he was eagerly trying to get the required two documented steals to pass initiation, as I have long ago. 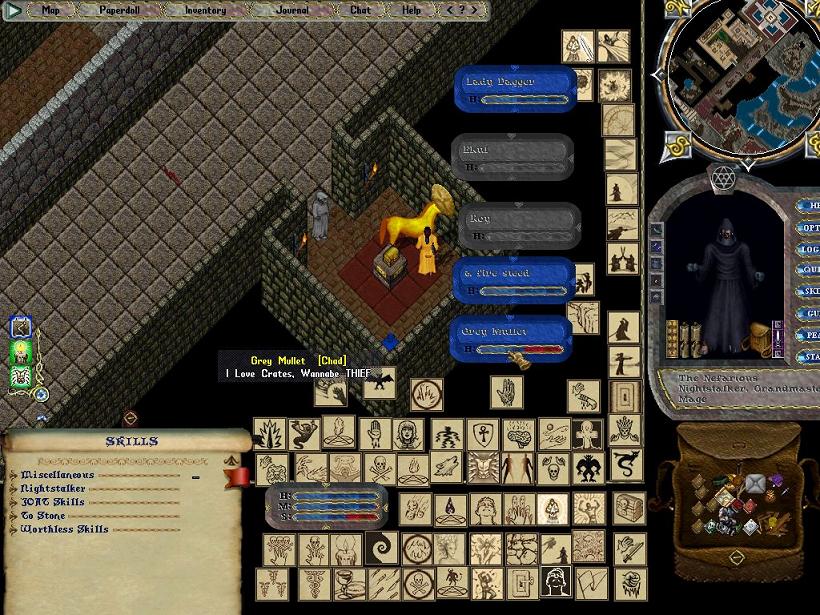 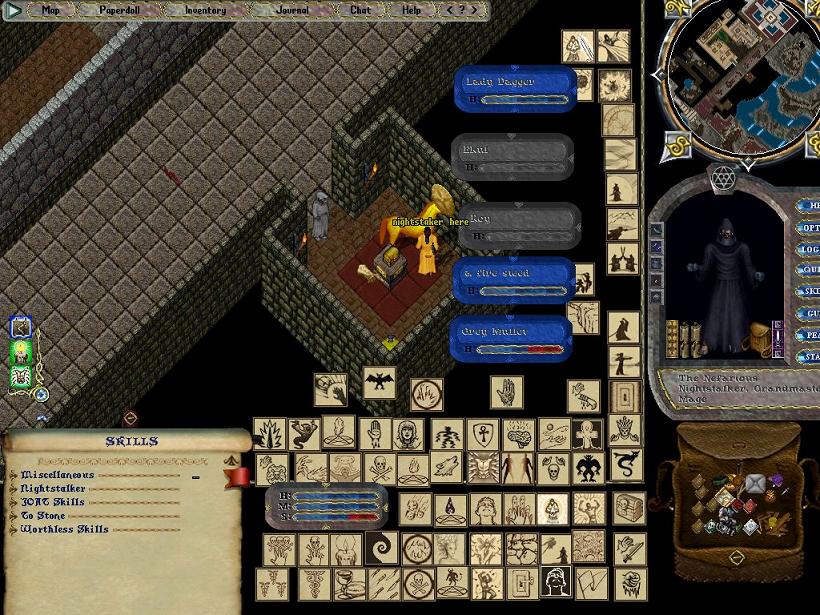 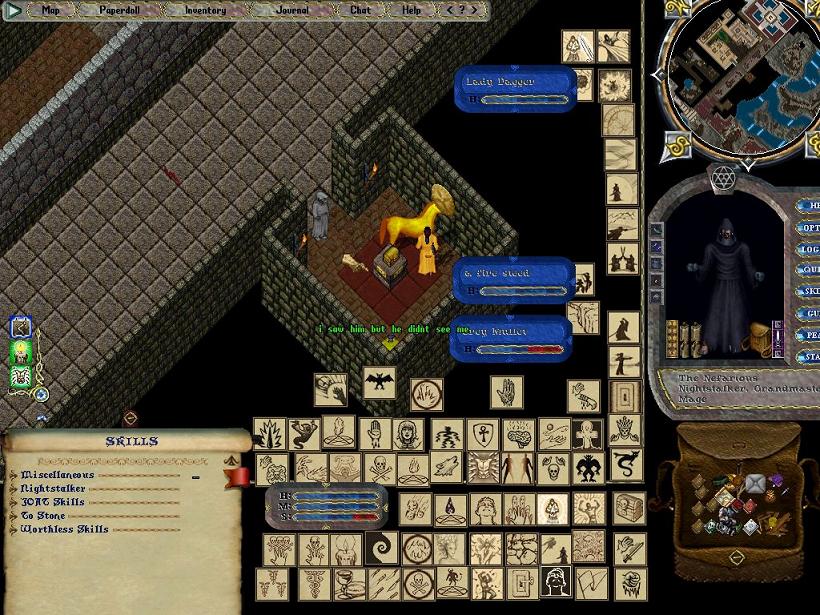 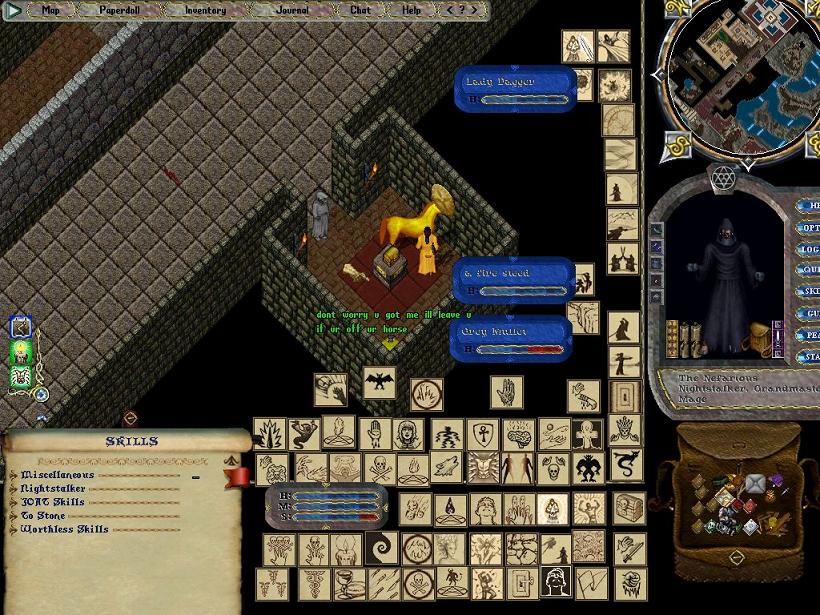 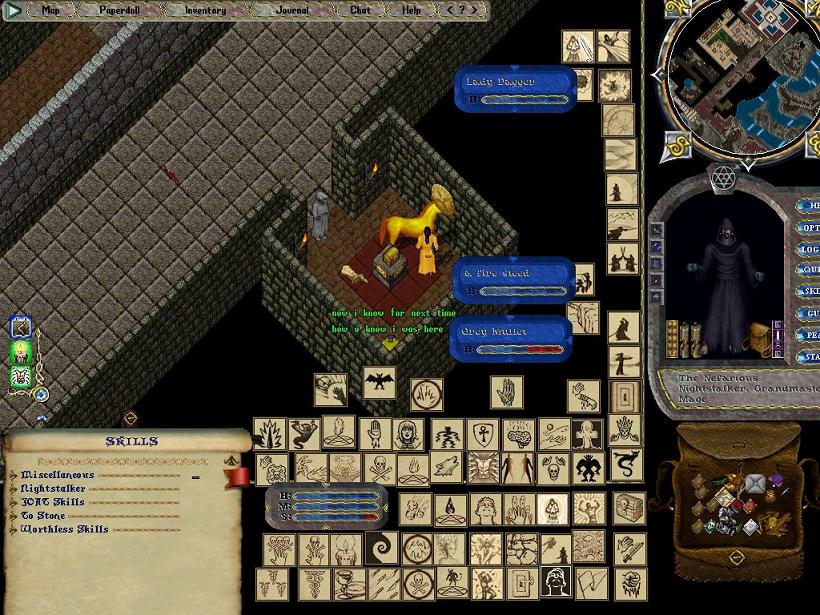 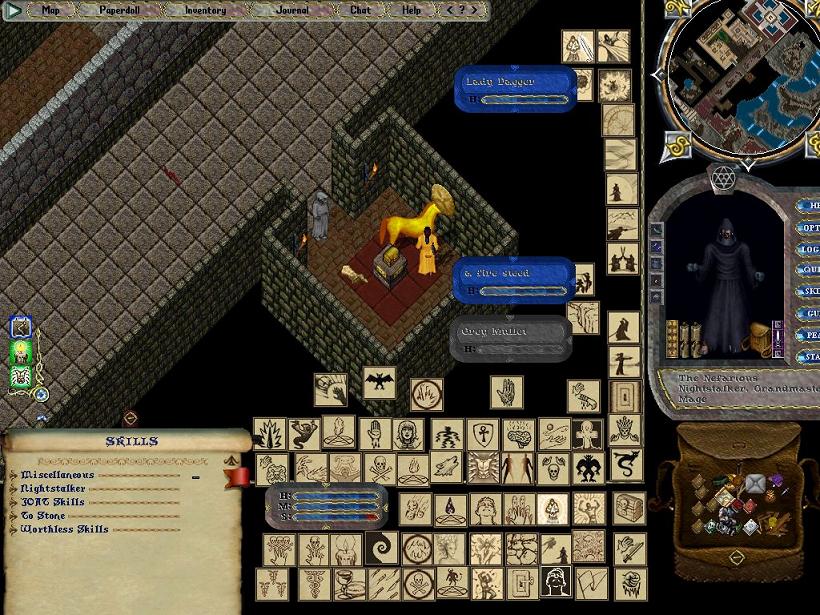 The Grey Mullet stepped on a poisonous tile, and was quickly dying. I cured him, then healed him. He was not my target, and it is against The Code to steal from or kill another thief. ( unless it is in self defense ) 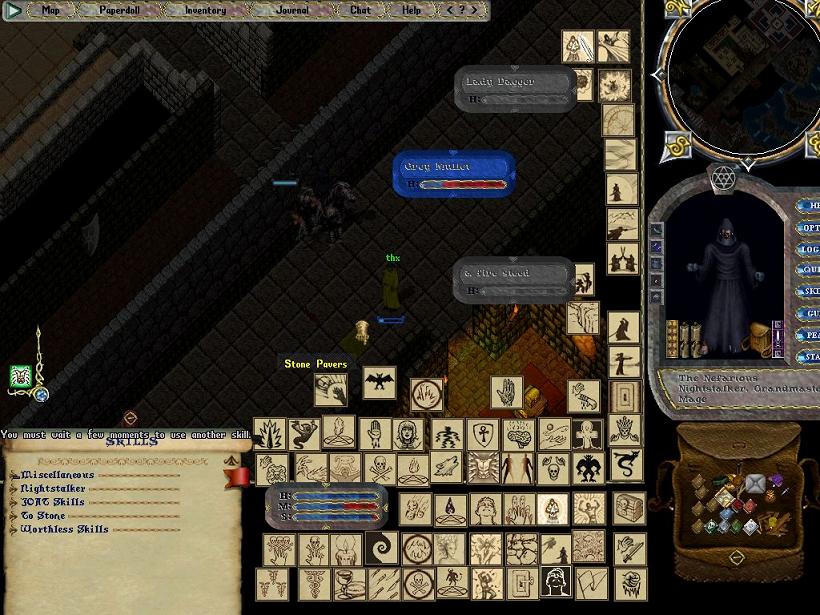 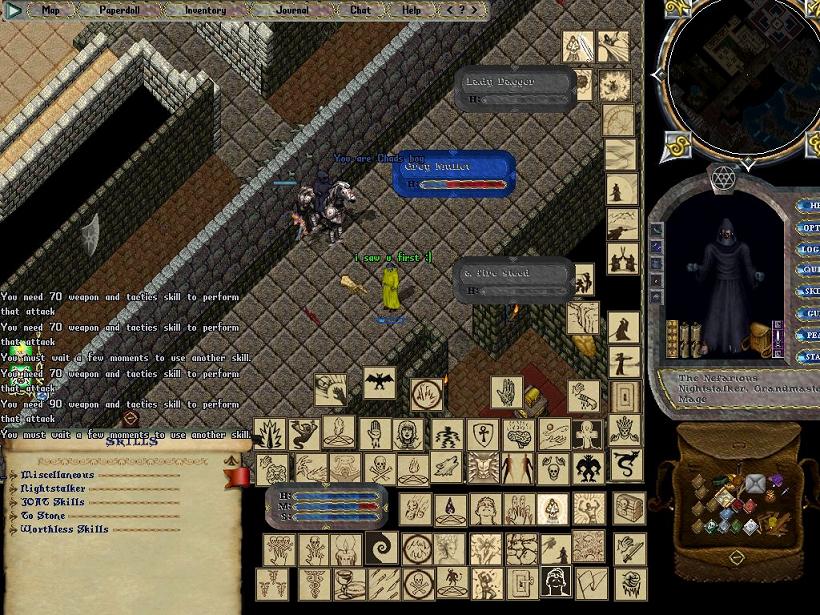 I made small talk while waiting for my inner strength to return, for it was going to take a big spell to get Dagger out of hiding. 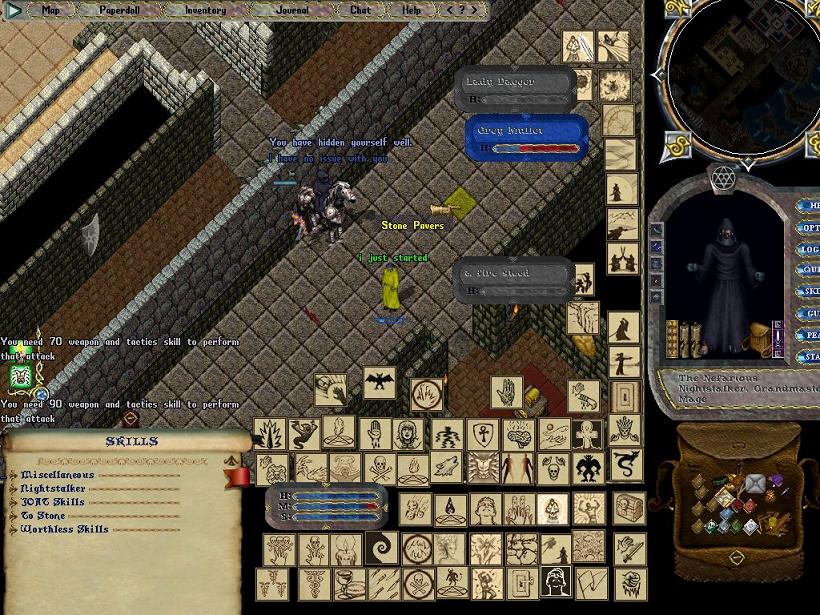 It was time for the assault. I uttered the words of a wild fire, and engulfed the puzzle room in flames! Dagger couldn't withstand the heat, and couldn't hide any longer, she was sweltering and her skin was beginning to produce boils. I sent my pixies in after her, and she fell off the horse and told it to avenge her in her now faint voice!
I turned to flee, but the Grey Mullet was standing in the way! I detoured around him and stepped on a few traps myself... everything went black.
It would now be a foot race to claim looting rights, and I was one step ahead of Dagger, literally. 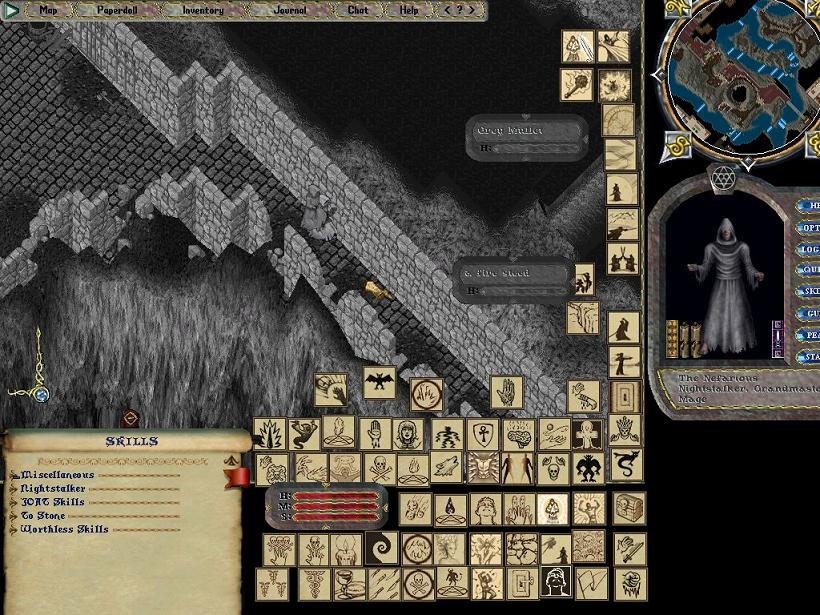 She turned South to make for the exit, and I kept going on to the wishing well, which has the magical properties of life flowing in its waters. 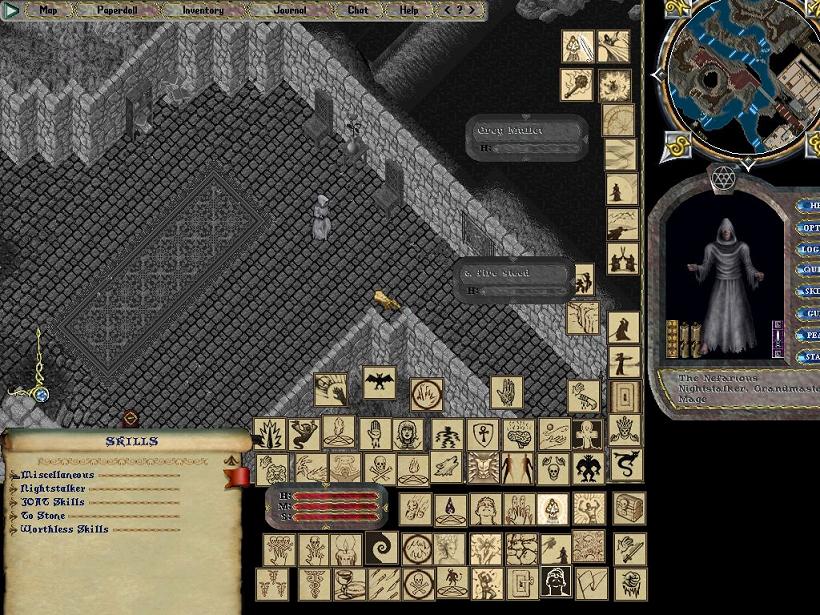 Knowledge of the magical sparkles brought me back to the floor maze very quickly, I was confident I was going to win this race!
I tripped over an invisible being... was it Dagger? Was it the Grey Mullet? Someone else? I quickly vanished and continued on, knowing that the Grey Mullet may have looted us both! 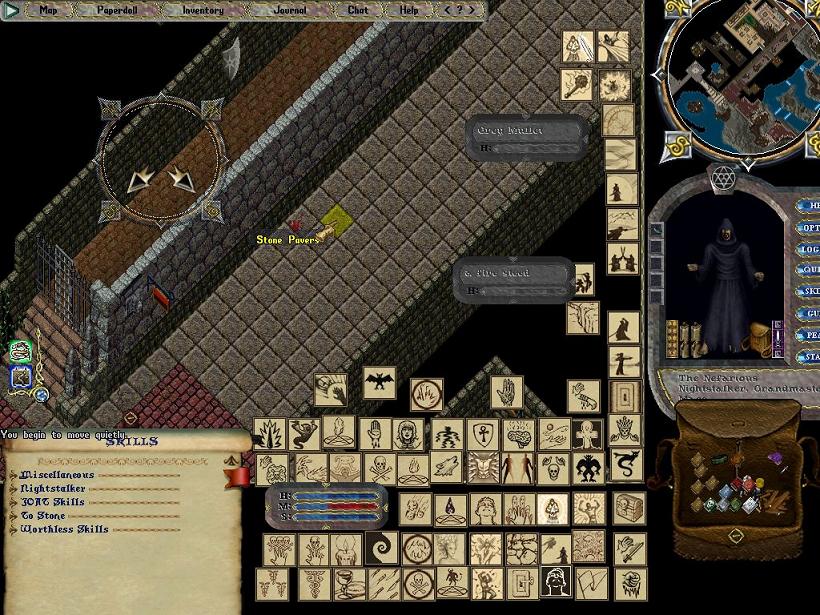 I was victorious! I reclaimed my belongings, and took those of Daggers. 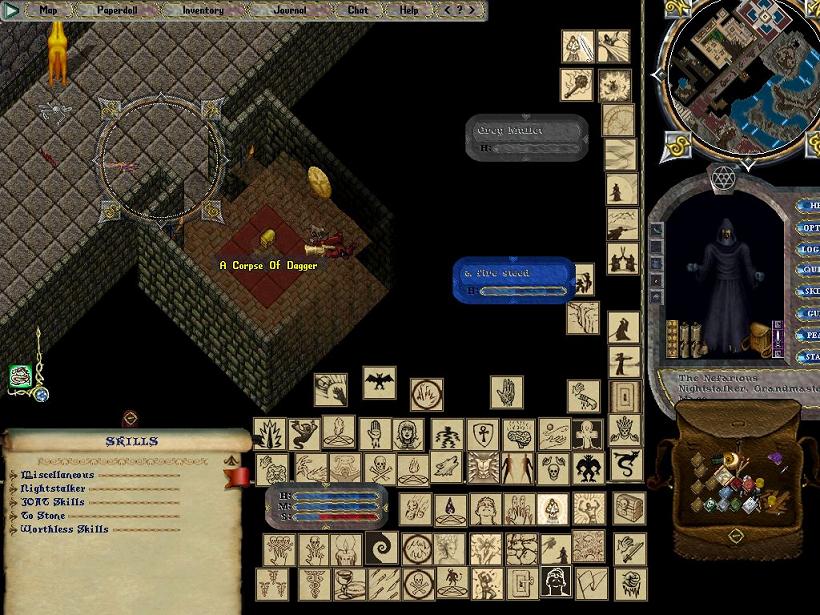 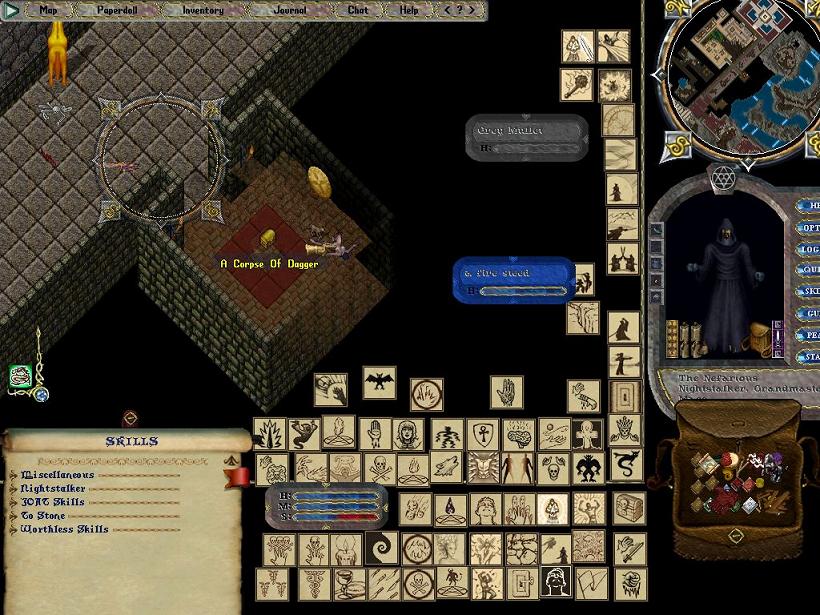 I made my way back through the dangerous floor trap maze, then realized a few things were missing from my pack! 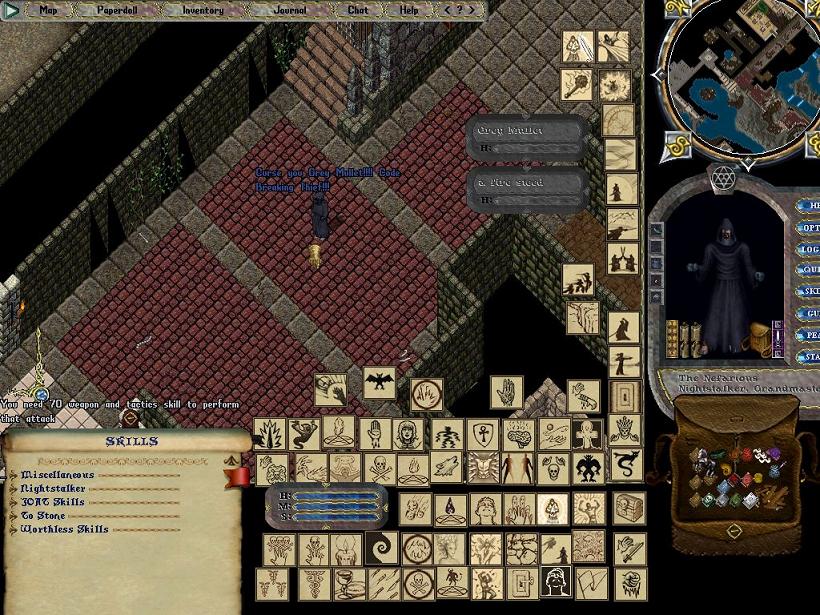 My Dusty Pillow was gone, as was a bag of reagents! The Grey Mullet looted the Nightstalker, and broke the CODE! "Maybe he didn't know I was a thief, maybe he had never heard the name, maybe I'm just not infamous enough", I tell myself, but then I remind myself that he did all of these deeds after I not only allowed him to live, but cured and healed him too!
A snake in the grass is what he is! He's the type who would loot his own mother! Thief or no thief, under Chads watch or not... this Grey Mullet WILL be dealt with! 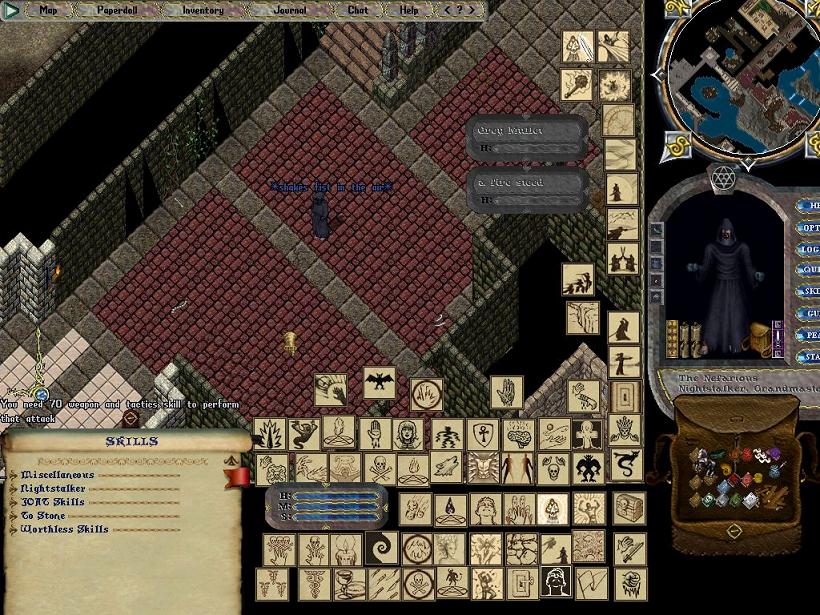 May the dust mites gnaw his ear off as he rests his head on my pillow!