Episode 0338: The Viscount and the Visitor


Just outside the lovely and aromatic town of Zento, Viscount Goop has some fantastic wares for sale, and more importantly I've just heard that he's holding onto a Stealth Alacrity scroll for a friend! What else can I do but head over there for a closer look? I've watched this particular slime before, and I have never actually seen him venture from the safety of his swampy front porch, so I decide that instead of a stealthy snatch and grab, a brazen, daylight, face-to-face robbery is in order! But how to gain this reclusive alchemist's trust?

The good Viscount's steward is known to give out rewards if you whisper a certain naughty-sounding nonsense word into his ear and that seemed the perfect cover story for my presence.

"meatring" I say to the steward and he hands me a check for 60k!

My cover now assured and my pockets a little fatter, I head onto the Viscount's actual property. I strike up a friendly conversation with the slimey one, who seems pre-occupied but friends me to his house! (didn't he see my guild tag? ^__^) We stand and chat and he oozes around and past me, giving me the opening to reach into the top layer of slime and pop open his pack.

And there it is! As advertised (thank you gen chat) a Scroll of Stealth! It's not actually an Alacrity Scroll, it appears instead to be a 0.5 SOT, but good enough for my purposes. I get the scroll on last target and now it's just a matter of time before he oozes past me again, giving me the opening to reach in once more and lift the Scroll out of the gooey mess of his pack. 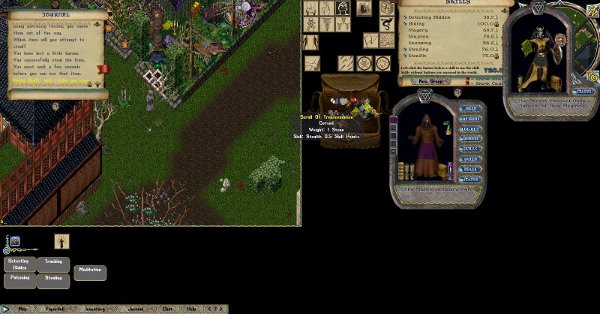 And I am now the proud owner of a 0.5 Stealth SoT! Now, having just finished training my stealth as high as I intend to, and knowing that Goop was holding that scroll for a friend (Kransmith, it turns out, who furnished my villa with the finest of free furniture...) I have no intention of keeping this scroll. Goop does, however, have another scroll on one of his vendors that I would very much like to get my hands on. A Stealing SoA. 15 minutes of increased gains? Yes please.

So I approach the good Viscount (who had noticed the theft only when he went to trade the now-vanished scroll to Kransmith, and was impressed enough with the smoothness of my theft to say so on GC. He had no idea it was me, and admitted that whoever got it had done a very good job ^^ {someday I'll get used to taking screen shots and capture all of that kind of thing}) I offer to make a trade: His Stealing SoA for my newly acquired Stealth SoT! 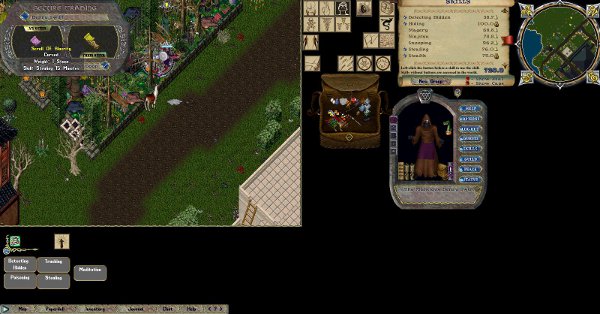 We make the trade and Goop immediately unfriends me from his house and revokes my access. Fair enough, I say ^^
I got what I wanted! 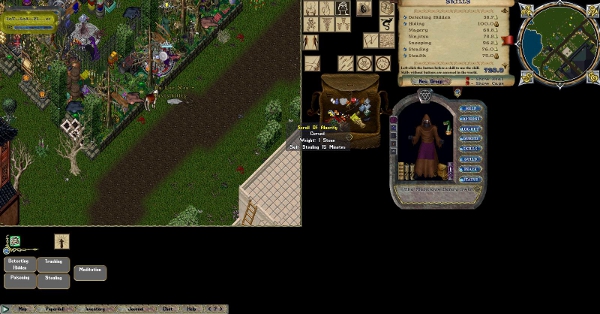 Today I learned that it's sometimes better just to pay someone a straightforward visit than to lurk in the shadows. And I also learned that you only get the chance to brazenly steal from someone that way ONCE!