Episode 0339: Whatever You Do, Don’t Drop Anything


There is a lesson that everyone can learn every day. People don’t always learn those lessons. Many go mad rather than learn. Others shout their lessons from the tops of the tallest buildings, or the top floor of banks in some cases…

I am a King. As King, I am often teaching my citizens these valuable lessons. What they choose to do, when confronted with a lesson to learn, is their own prerogative. Let’s face it, they paid for the lesson whether they learned something or not, and whether they chose to pay or not.

I was recently in the bank of Luna, home to some of the world’s craftiest tax evaders. It was a rather quiet evening on Chesapeake and I wasn’t engaged in any particular revenue raising activities when my duty as the King of Thieves and Minister of Teaching was suddenly relevant.

You see, I was observing some suspicious characters. They appeared to be transferring large containers of un-taxed goods between them. The greedy mongrels were discussing how to transfer a container that weighed too much for one of them to carry.

An obvious solution appeared in the mind of one.

Tax Evading Mongrel – “Eureka! I’ll put it on the ground and you just grab it”

As I thought to myself that this couldn’t possibly be happening, I noted that I too, was ready. 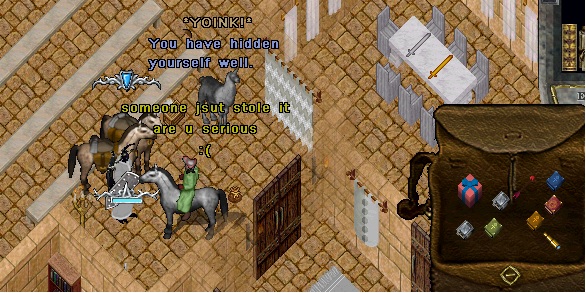 Yes, someone DID “jsut stole it,” seriously.

Then, I waited to see if my unwitting students would learn anything. A good teacher wants their student to learn.

Suddenly, a synapse fired and a tax evading fool became a little bit less of a fool. 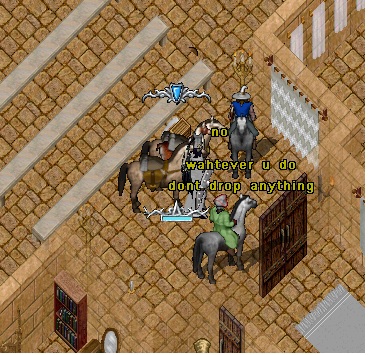 And I was hopeful that there was one less fool in the world. Unfortunately, he decided to voice his continued ignorance for all the world to hear.

Seriously? You don’t know who the King is? What kind of ignorant citizen are you?

The wise Belle Starr chimed in and dispelled his ignorance with her knowledge of my excellent reputation as the benevolent and mighty King of these lands.

And then the other ignorant mongrel tax evader chimed in.

Delusional and a piece of shit? Me?

I disagree. I’m clearly an awesome King with a very firm grasp on reality.

As for my reputation, Belle Starr has clearly informed you I’m the King of Thieves. Let’s face it, there isn’t a better reputation than that. I mean, it’s not like I was publicly engaging in any foolish behavior that resulted in me losing my stuff, right?

And it wouldn’t be Sosaria without dramatic threats of quitting this realm for another one, now would it? 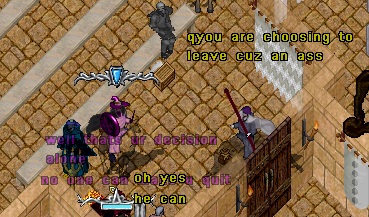 According to my latest student tax-payer, not only can I rob you, and teach you lessons, I CAN ALSO FORCE YOU TO QUIT.

I guess even the student can teach the master. I didn’t know I was so awesome that I could even force you to quit.

And remember,
Whatever you do, Don’t Drop Anything!