Many of the greatest thieves of our day expressed an intent to participate, indeed I myself was intrigued by this contest.

Glorious prizes, undying fame, bragging rights for the ages and free viagra from canadian pharmacies!
WHOOPS! That last one may have just been some spam I received ^^

As King of Thieves, there is a certain expectation that I will enter. A well founded expectation, as my ego will permit nothing less than sweet sweet victory.

There was one tiny little problem with my plan, I have absolutely no idea what theft will ensure said victory.

And then I encountered shizle my nizzle, a mark with such a dumb name that I am compelled to enforce the dumb name tax on him.

Mr Nizzle, I’m going to need your treasure map. You can keep your steak but your precious is mine. ::YOINK!:: 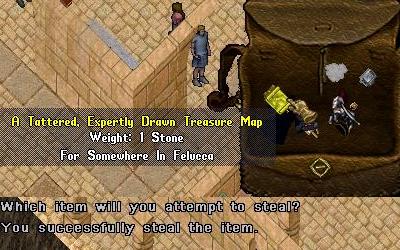 Oh wait, that’s right I’m a thief. A Treasure map is useless to me.

And then I encountered two ripe marks excited that they can fight on Siege Perilous. Knowing how excited they were about that, I knew they’d be ecstatic when they realized they could be robbed too.

Unfortunately, nearly everything this guy is carrying can’t be stolen.

But A King never gives up and I spot an old practice weapon. Such treasured weapons are rare pieces of memorabilia from days long past.

A fine steal but not fine enough to win Chad Sexington’s contest. More is always expected from me than from commoners. I’ll just have to try harder.

I start to wander back down stairs.
I suddenly spot the single ugliest creature I’ve ever seen. 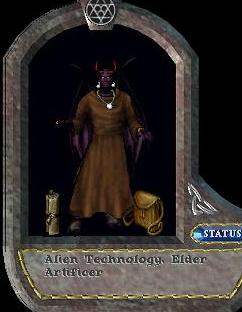 It’s like some deformed mutant ugly bat thing. What kind of drunken creator makes such monstrosities?

I really don’t want to even touch this abomination or dignify it with my close proximity.

But it might be carrying exactly what I need to win this contest.

But the fangs on this creature!

Damn you and your contest Chad Sexington! How could you find my weakness?! how could you have known to appeal to my sense of greed for prizes!?

I peek in the foul creature’s pack… 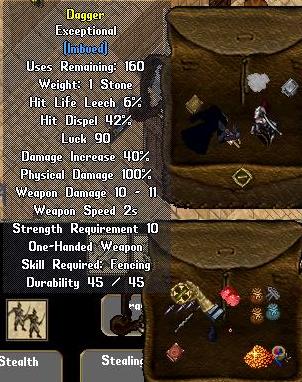 Another loser but it does appear to have SOME value…

oh what the hell, I can always use another magic dagger. 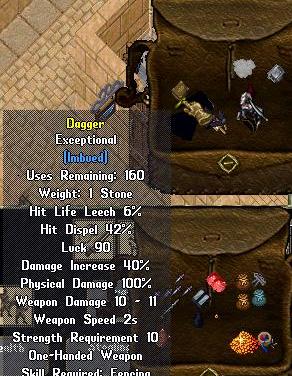 And then a confused stripper waltzed into the bank. 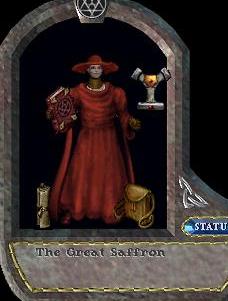 Now, I assume she’s a stripper because only strippers are named after spices in my experience. However she was wearing this big covering robe that leaves me to believe she was off duty or unaware that strippers remove clothing.

I begin searching her pack for evidence to confirm her stripper status.

Not surprisingly, I was able to confirm her stripper status when it appeared she was carrying maps to her “buried treasure”

Oh strippers, you have the weirdest names for things.

I’ll take this for ummm… ehhh… evidence! Yes, this is evidence of my findings. 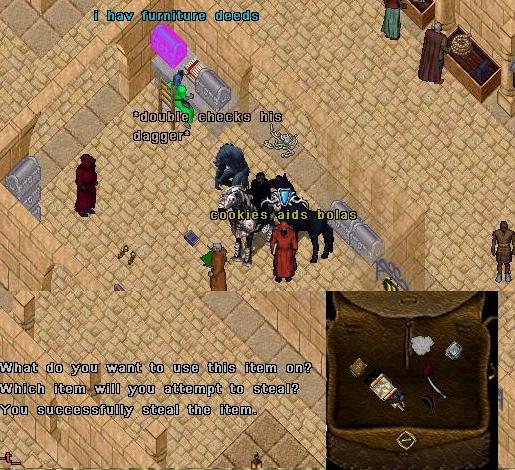 Upon closer inspection, the general conversation taking place in luna provides all the evidence I should have needed that this is a seedy strip club.

Some wolf of a guy is carrying a weapon…

The alleged and now proven stripper is saying something about cookies and aids (I’m not going to speculate what she means)….

I steal another valuable item from another patron of the club before the bouncers decide I should leave. 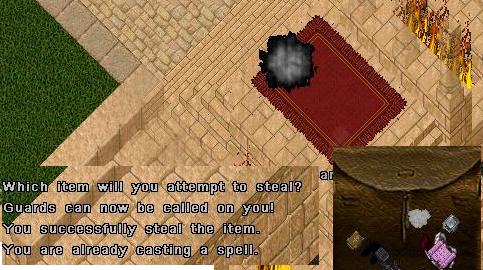 I ran outdoors as fast as I could and found myself thinking it was the best strip club visit ever. 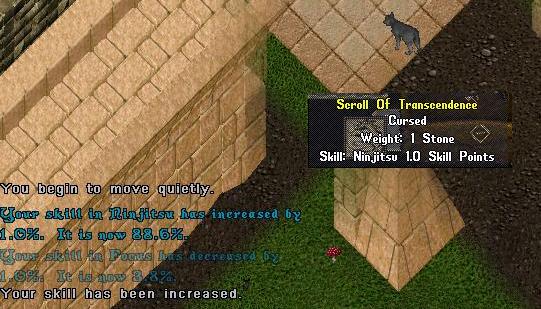 I digress. Nonel The Devious already stole a great Scroll of Transcendence. This might not win it for me.

How can I ensure a win?

Perhaps if I just indiscriminately rob everyone I see, I’ll stumble upon a victory. 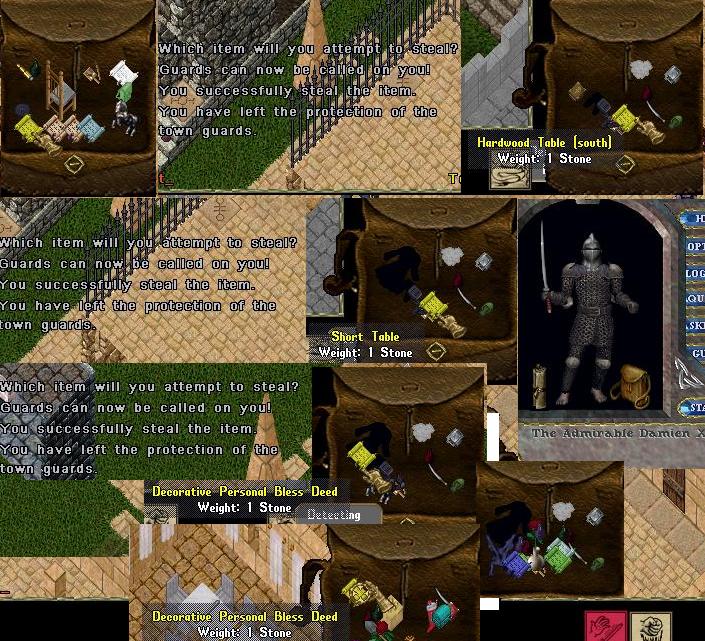 Several personal bless deeds later, i still feel I haven’t won… What can a King do to win?!?! 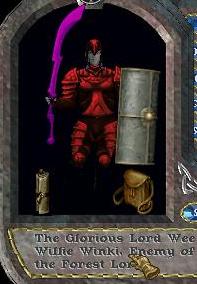 A Mark I enjoy robbing… This guy always carries good weapons and he never catches me. A Mark that never learns… ^^

This is a great steal on Siege Perilous.
I later sold it back to him for 100k

I’ll need to steal something that can’t be matched as well.
With thieves like Shinobi on the prowl, you can’t just rely on having stolen a great weapon.

And then a fairer maid than Saffron appeared… 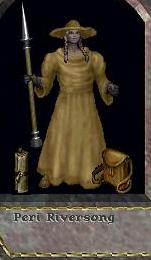 I, Evil Lord SMuRFY, will win her heart! Nobody can compete with a love story! Who but I could get a map to a strippers’ burred treasure AND win a fair maids heart?

It’s a glorious thought but I’ve never been one for winning anything. I’ll just steal her heart. 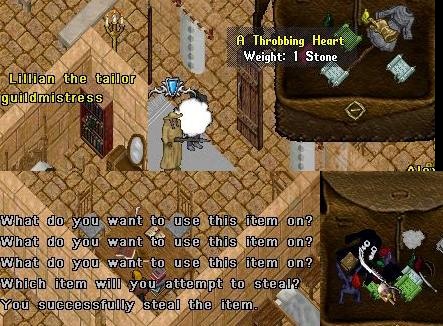 And for good measure I’ll steal someone good jewelry like a good thief should. 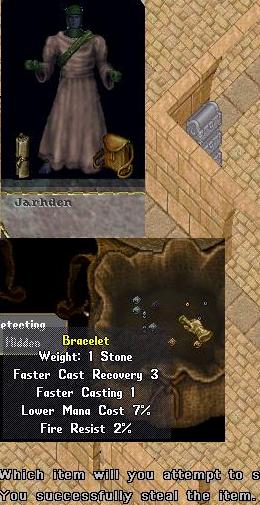 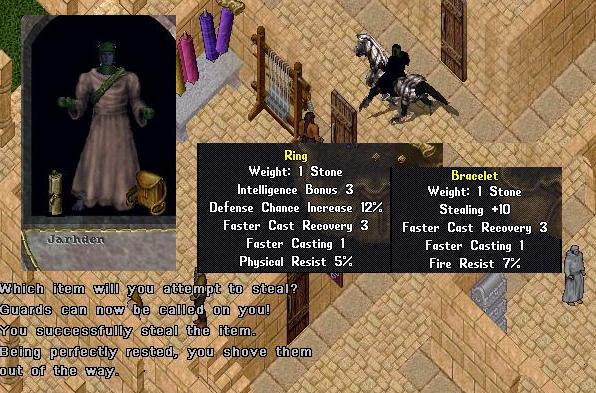 The Former President Of The United States plays UO? Perfect. Thank you Mr. President, your doctrine of preemption has inspired me to be a more effective thief. 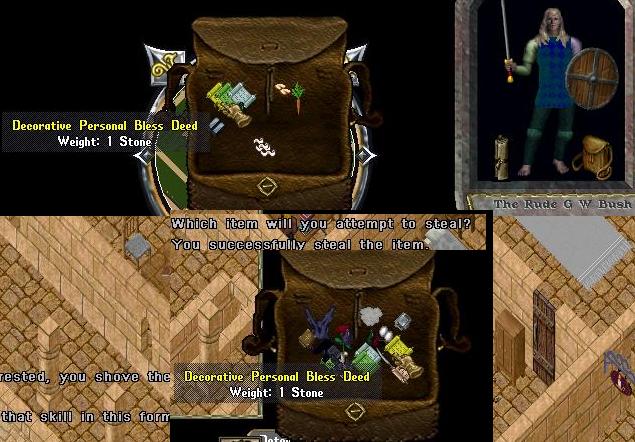 Mmm… I’ve stolen from a famous guy, and stolen a great weapon, and a maiden’s heart and a map to a strippers buried treasure… I’ll bet my detractors will scream that I failed to rob someone that is a total bad ass. Someone utterly intimidating.

But who on Siege is intimidating?

And in walked a bad mama jama.
No, it wasn’t shaft. But could you imagine robbing the former president AND shaft? 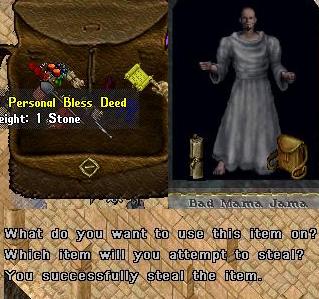 Mmmmm What else could be stolen? I’d need to steal like an event item of sorts to win…

But where can I find an event item? 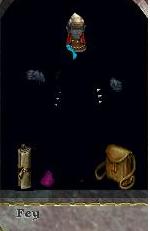 Oh fey, You would just waltz up to me with two July 4th Event Items when I am needing event items.

And because Chad Sexington provided some solid thief advice for thieves moving to siege, I’ll siege bless it so I can steal the other one quickly.

And If 1 event item theft is good, then 2 is MORE good. 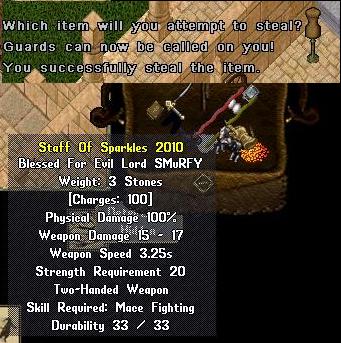 My name is Evil Lord SMuRFY and I am the King of Thieves.


-Evil Lord SMuRFY,
The King of Thieves, and Mayor Of Barter Town

P.S. Oh and Chad, I’m holding your bulletin board hostage.