Now what many don't understand about the life of a thief these days, is that you have to roll with the punches, you'll have days when it seems everyone is carrying around things just to appease you, and other times you'll have a streak where nothing seems to go your way. The past few days for me have been a good example, if you've been following along you know that I've had some small success, and that I was still working skills. Well I finally reached the rank of Grandmaster in hiding and decided it was time to really try and do a few Champ spawns, but I'll get to that in a moment. Now I don't know if you believe in omens or fate, but after the steal I managed a few days ago I thought things were really looking up. 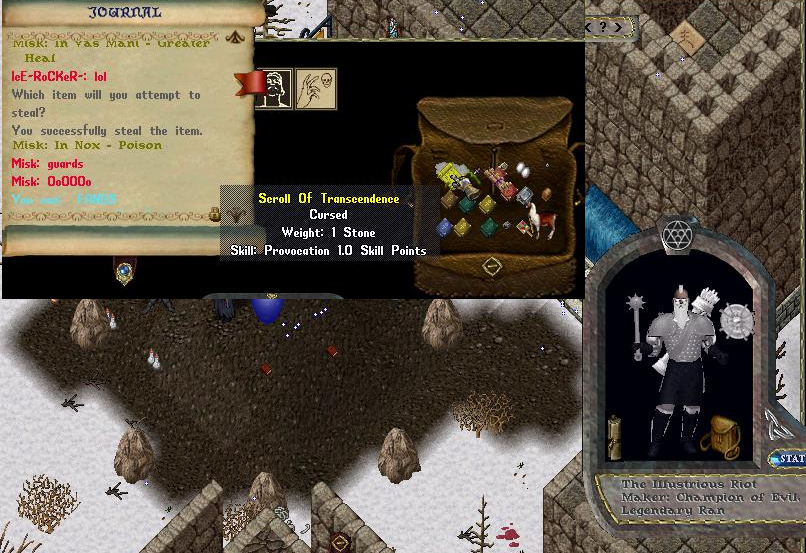 A 1.0 Provocation SoT Scroll, after a little research I found that these are selling for around 3 million each, a great steal if you ask me. Now after that I really did believe that I was going to hit a hot streak. It turns out I was wrong, but on the up side I did learn a few lessons and see a few new tactics that had as of yet never showed themselves to me. You see I'm used to a shard where there are really very few thieves, in the course of a year I've seen besides myself 3 and none of them were at it long. People there were not really used to dealing with thieves and that made my life a bit easier, being on Atlantic has proven to be a bit different, and a bit more difficult in some ways and easier in others. I mean yes with all the people there are more that are foolish, but then again there are more that aren't, and here's a prime example. I finally caught a spawn I'd walked in right before Barracoon was to die, and saw 1 person on the island ( As it finished up I saw another that was staying hidden ) but what really got to me was this. See if you can catch it. 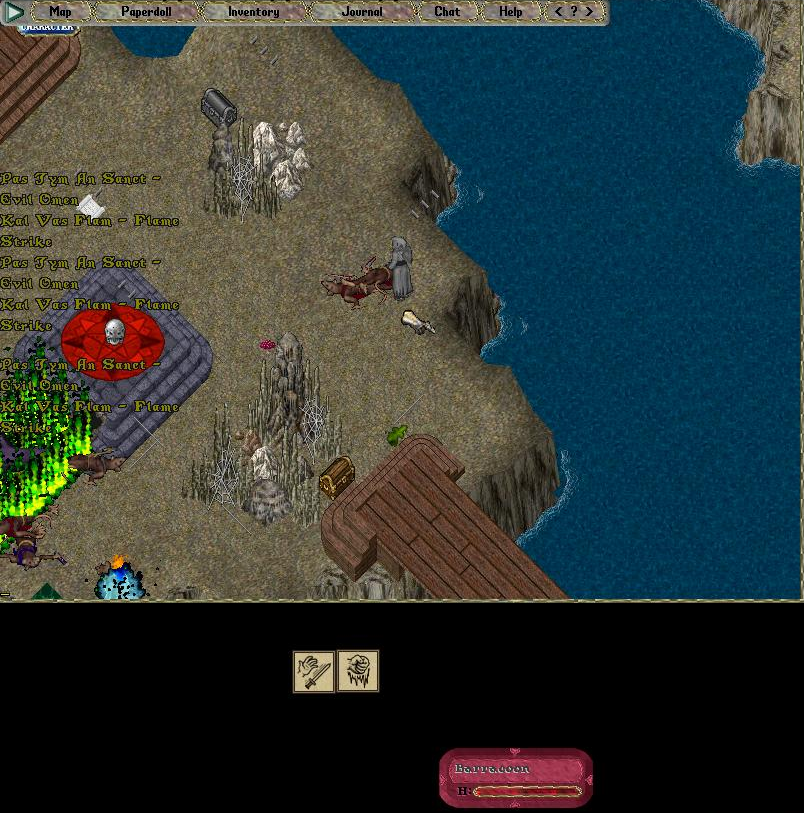 Do you see it? Yep that's right he's fielding himself right before he finishes the spawn, this scatters the spawn Barracoon summons around him. Of course he's immune to his own fields, but I'm not, he's effectively prevented me from being able to get to his side to snoop, I don't know if this was intended for that reason or not but it worked. I see him and his mate take off towards the sparkles to Terra Keep leaving the gold instead of taking the star room gate. I hop it and hide at the moongate there, the blue that was hiding shows up. I snoop and find nothing, the one that completed the spawn, well I didn't get a chance to snoop him at all he was in and out in a flash.

Like I was saying life isn't always easy for a thief...Some days everything just works out, others though..........but lets flash forward a couple of days.

Another fine night at Yew Gate, I really do like it all kinds of traffic flows in and out. Yes I do have nights where I'm tripping over my unseen fellows but on a good night it's not a big issue. Tonight was to be one of those nights. 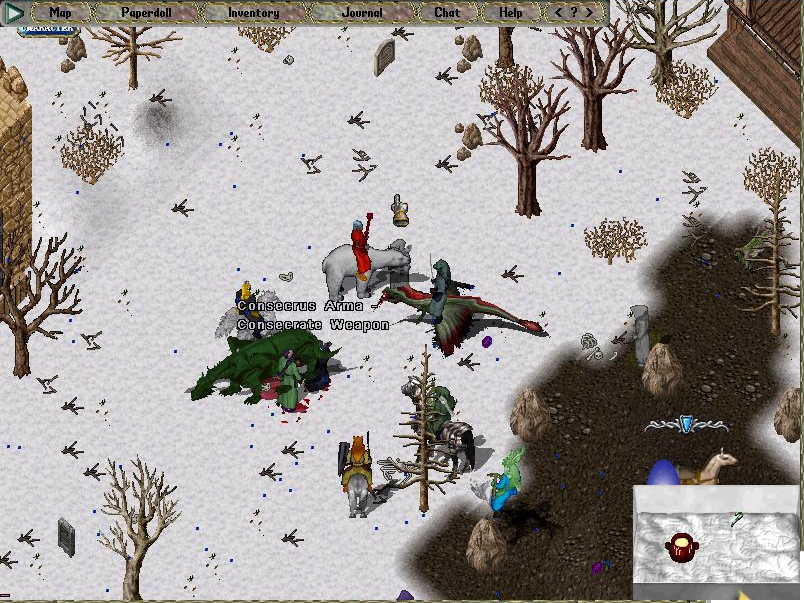 Chapstick is carrying around a nice warming pot of Eggnog, a tasty treat that I myself don't have here on Atlantic, so I decide to remedy that situation. Why anyone is carrying items around from Christmas I have no idea, but I'm not one to complain at least not when I'm on the receiving end of things. 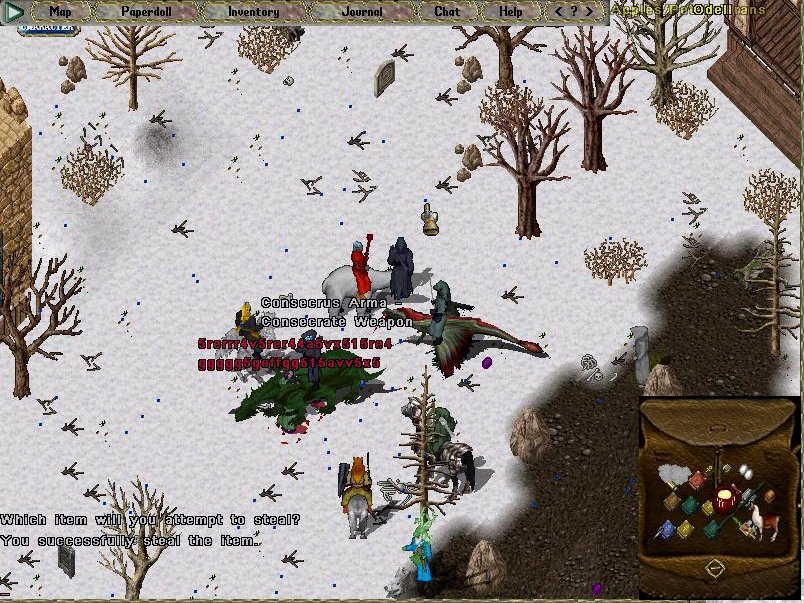 Yes I took it, it's cold out here and if I splash in a bit of liquor it will make a fine warming treat, after all my little wolf paws get cold as I travel the ground, the least I can do is make sure once I resume my elven form I have a nice warm drink to take off the chill. Besides, if they are so careless to carry uninsured, non-blessed treats of this nature around then by all means I'll accept them as a "donation" without complaint.

Now things got slow again for a few days after that, they really did that it seems wasn't the break I was hoping for, though I accepted it and accepted it gladly. So now we come to tonight, tonight started out looking just as bleak and bleary as many others, earlier I'd found someone toiling away in Heartwood oblivious to the world around them. As I waited on them to acquire me a nice jewel or runic kit a strange voice spoke from the ether.

Thowe: Greetings! All shards are coming down for maintenance in one hour. Thank you!

Ye gads, the Lords of Britannia have deemed it necessary to end my wait early but for what purpose? Well that was answered later, it seems that they had gifts to distribute for the Romantic holiday that is upon us, and like all supernatural beings they prefer to slip presents on us whilst we're sleeping. Being all powerful they just made us all go to sleep instead of waiting on us to become weary. I must admit though having a throbbing heart in my hand does make me feel a bit more manly........

Now where was I? Oh yes back to Yew Gate, with the interruption I was sure that it would be hopping with characters, murderer's, thieves, noble guardians of the virtues, and members of the various factions that dominated the lands of Felucca. Now what I didn't expect was Amanda, dressed completely like a newbie, wandering around the gate carrying not only the new presents (which are unstealable btw), but gifts from 2003 and of all things a couple of practice weapons. Now since my options were really limited on this, I decided that since they obviously were not new, I'd relieve them of those ancient weapons to encourage them to find more modern and serviceable ones.

Which to take first? The Crook or the Skinning knife? I decide on the skinning knife, if I don't flag on the steal it's small size will make it less likely to be noticed. After all if I want a chance at both I don't want to scare her off. 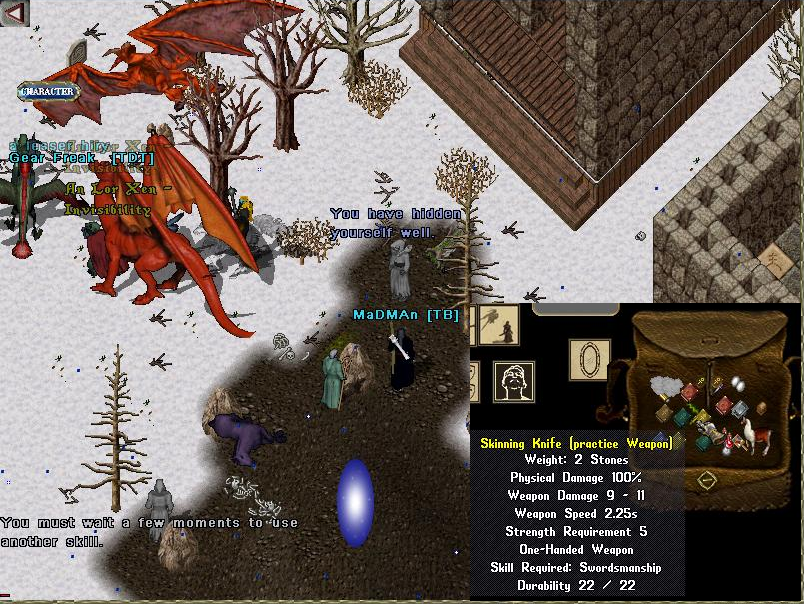 I take the knife and she doesn't even flinch, the fact that there was an elf exited the gate and ran by might have helped explain it away as their passive reveal ability getting the better of me. So I sit back, hide, wait till the time is clear to snoop again and prepare to claim the shepherds crook. I manage to get her pack open again and I quickly set the weapon to last target.

Amanda does a few laps around the gate, while I wait. I know sooner or later she would make a move that would open me up to claim that fine antique weapon of hers. After a bit she pauses, and shuffles the gift box around in her pack. I do believe she's noticed the missing knife as she makes her way to the moon gate to exit stage left as it where. I hear the mystic vibrations of the gate give off their foreboding notes and make a break for it. Just before she vanishes I reach out and grab the weapon and it remains in my grasp as she's whisked away to some other location.

She appears shortly later and searches for the person that abducted her valuables, but my vanishing act proved too much for her. The foot traffic dies down slowly and I decide to call it a night, so for now cherish your valuables for tomorrow there may be a new thief in town.