Episode 0138: My father is a GM so you better give it back….and he made the game


**DISCLAIMER** -- you may breakdown in an uncontrollable laughter when reading this.

Don't say I didn't warn you.


So here is the story:

I find Relendor at Luna bank attempting to sell this replica drop web for roughly 75mil; my interest was intrigued immediately. Little behold, I saw that it was uninsured *smiles*. So, me being the clever person that I am, said that I am interesting in buying. The problem is that I have most of the checks at my house in Felluca....He states that I should just grab the checks, but acting quickly, I told him that my bank/backpack/house is pretty full, it would be a hassle, my girlfriend is getting pissed at me because I play to much UO, etc.

So, after a bit of persuasion I convinced him to come to my house in Felluca. As I was about to open the gate, I see PRINCEGEORGEIV walking up to the gate....

Yes, I did start to laugh.


So, I agree to do so and open the gate to my house. As soon as we get to Felluca, verbatim:


The aggressive nice guy...this should be fun...


So, as we are walking into my house, I had his pack opened and notice that he insured the Web. For this occasion, I keep my house stock with vendor rental contracts. I told him that i'll setup the vendor just to make things easier since there is so much gold involved and it is much more secure (or so he thinks). He agrees immediately. I agree on a price of 65 million after negotiation with him for a bit, and Relendor puts it on the vendor. PRINCEGEORGEIV starts casting energy field randomly around my house....I still don't understand why....so I decided to boot him from the house and change the security access of my house so he can't get in. One less thing to worry about once things go down.

So, I wait about 90 seconds, and tell him that I attempted to purchase the web but don't have enough money....I asked if he minds putting it to 60 million and I'll grab the rest from my other characters. He agrees, and of course, it goes to his backpack:

Following this, I boot him from the house, and it was done and over with.... 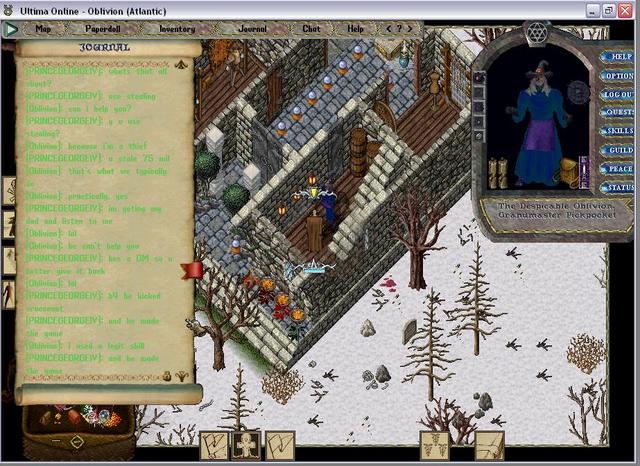 PRINCEGEOGRGEIV is still waiting outside of my house...5 minutes passed and he was still there waiting for me to come out. So I said, what the hell and partied him to see what he wanted. I've enlarged the conversation so you can read it....and seriously, after 10+ years of playing this game....one of the funniest responses I've ever seen to date:

So, I clearly shouldn't be messing with PRINCEGEORGEIV anymore....


I wish I had the pictures to back this part up, but I don't think you will have a hard time believing me due to the actions that have already taken place:


To really put some salt on the wounds, I immediately recall to Luna and spam 'Selling very are 'Web' replica drop! Party me if interested.' Roughly two minutes later, PRINCEGEORGEIV sends me a party invite. I accept and see the following text:


After laughing at this response and the situation that just happened I thought to myself quickly: "If this guy is as stupid as he has been acting, I bet you one of those items are uninsured"

I asked him to put the items into secure trade; the boots were blessed, and of course, the oak leaf replica was uninsured. I quickly 'target' the item, and said the magic words:

Oblivion: Ok, i'll take you to my house

But for some reason, we never ended up at my house...For some reason, I ended up gating to Occlo (my favorite town in UO as a side note). I walk through real quick, activate steal macro, waited from him to go through the gate, activated last target macro:

You successfully steal the item.

You disband the party.


I think he is still trying to figure out where he is and how to get off of Occlo island. Maybe he should ask his father; I mean he is the GM who created this game.

Thank you ladies and gentlemen, I'll be here all week.