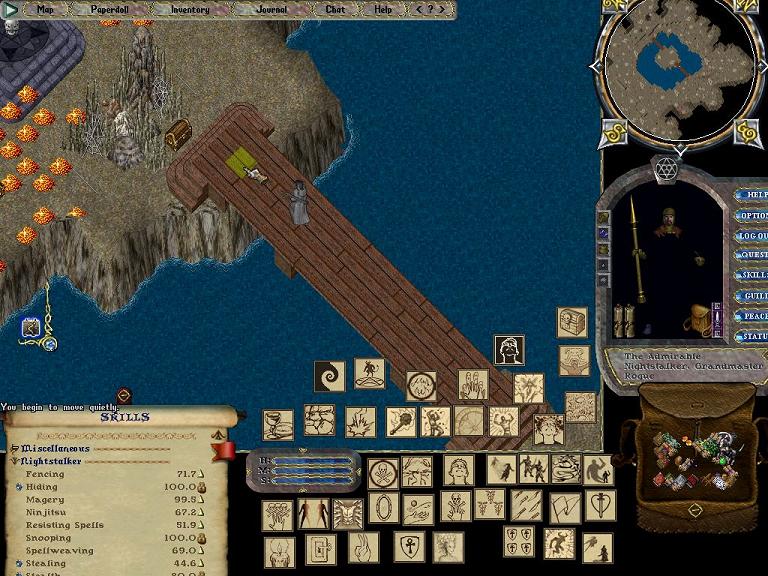 Ever since various towns have come under attack by Crimson Dragons and their armies, Dungeon Despise has become rather empty. All of the forces who previously fought the evil in this place have been summoned by Lord British to band together to ward off the attacks on our own turf, that are threatening our way of life and our very existance. It appears there are two who are Absent WithOut Leave, seeking their own fortunes, rather than serving the King whos land they live on. 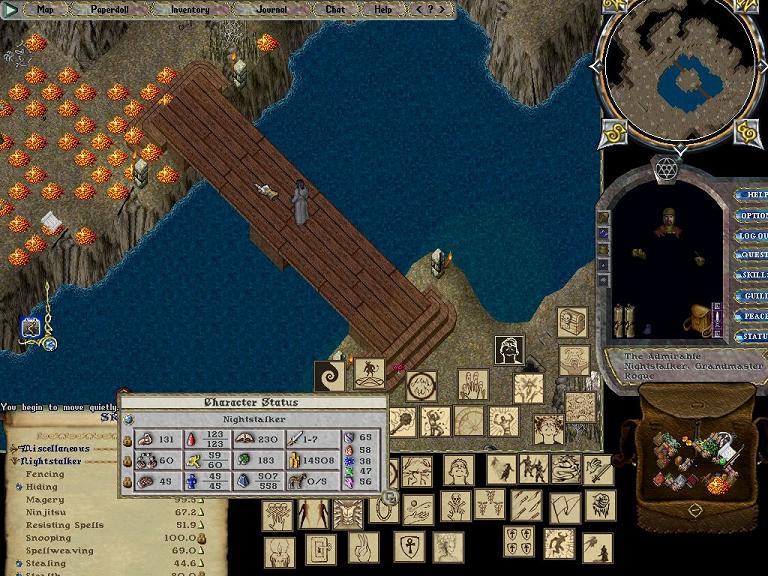 And it looks like they've been here quite some time! I quickly fill my own pockets and gather together all the gold for myself, and stash it away in my secret place, as this is much too much gold to be carried by an army... this will require several trips. The necromancer Tek was the first to arrive, and upon noticing all the gold missing, he combed the area looking for the thief who claimed his gold. Satisfied that he was alone, he summoned the followers of Barracoon once again, and began to make them wither away. Shortly thereafter, his friend arrived with her pet dragon. *SNOOP* 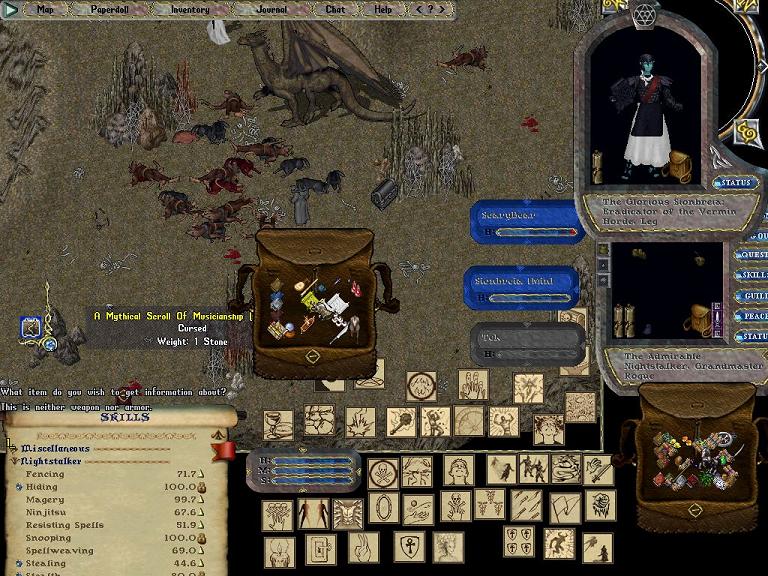 A Mythical Scroll and two lesser ones. I had prepared a speech, rehearsed it several times in the calm lakes reflection, even had the bow down perfect... but, dragons aren't impressed with such niceties, so I was sure to skip past them... er, run past them. 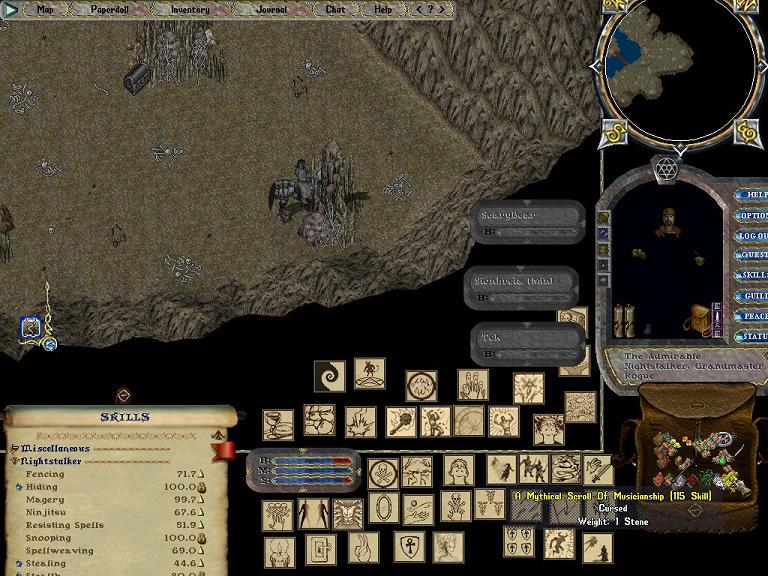 Unscathed, I returned to see what else I could call my own. This ring seems more valuable than the two scrolls. 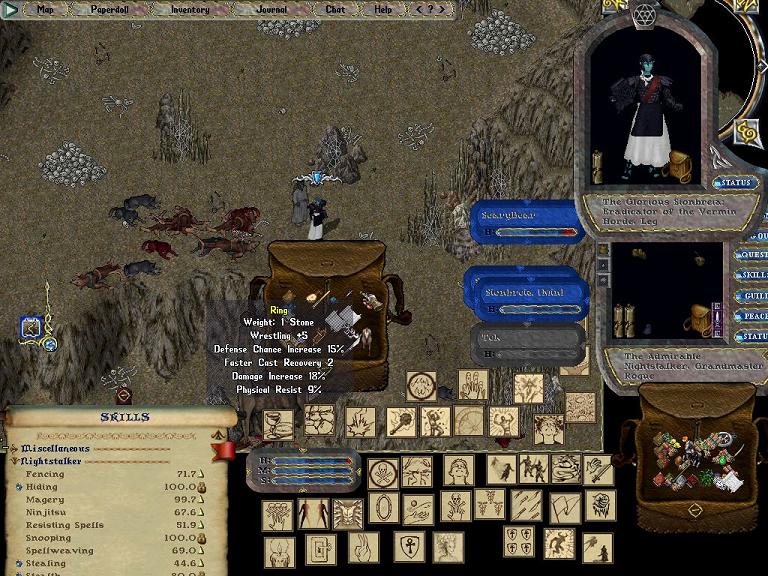 I thank thee ^^ for thy donations. It appears I've exhausted all of the valuables from your backpack... let's see what your friend carries. 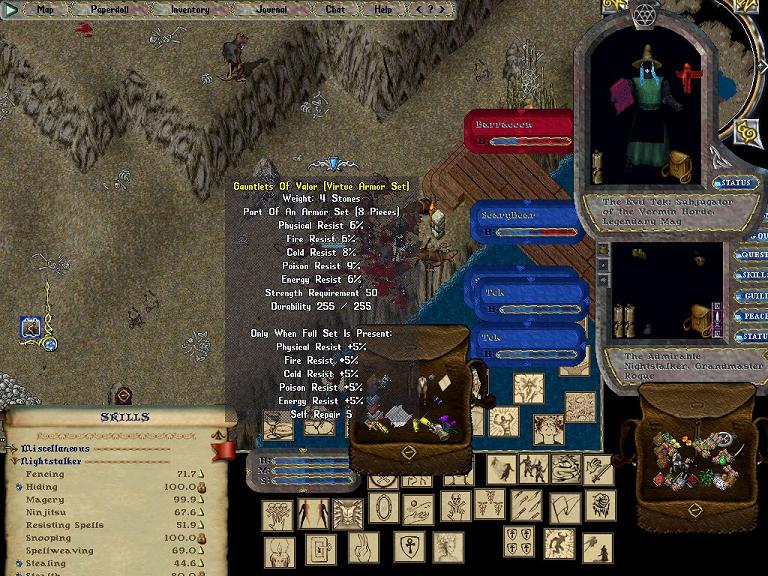 "Tek! You shouldn't have!", I whisper to myself, a little too loudly I suppose. As I was reaching for the gauntlets, he whipped around at my voice, causing me to drop them back into his pack. "Shit", I yelled, as Tek was causing my own flesh to wither away. In his moment of distraction, Tek found himself yelping for help from beyond the grave. I'm not quite sure what happened, as I was around the corridor, but when I returned, there was a bunch of great items just laying there on the ground for me to take. I managed to grab two of them, before Scary Bear was sicked on me... I still didn't get those damned gauntlets!

I returned to Sionbreia's pack, and found that she had accquired a nice staff in the short time I was dealing with my other victim. 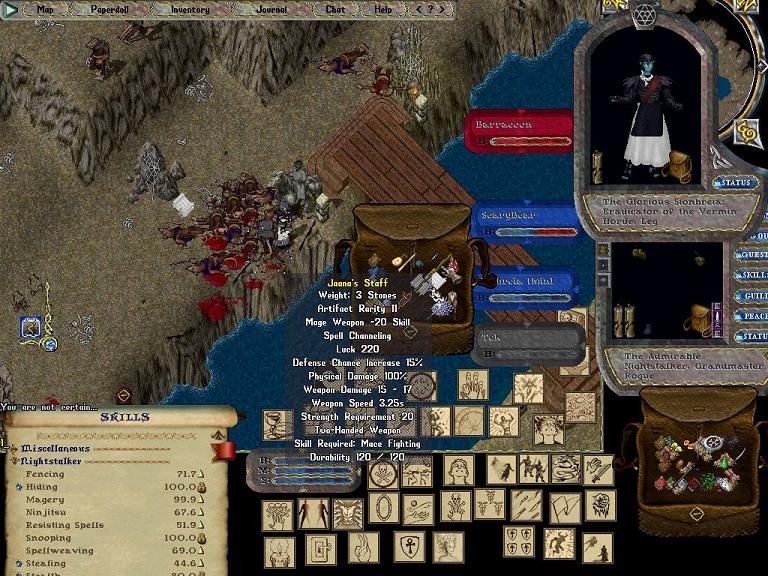 As I was returning to the scene of the crime, Barracoon fell, they cast invisibility on themselves and made their exit, as I expected they would. Everyone seems to get defensive when Barracoon falls, but are sloppy all the time beforehand. If I hadn't acted when I had, had I waited in silence for the chance to grab a 120 scroll, I wouldn't have anything. My experience has been to do as shown above, which reaps the most reward.

I've managed to collect three hundred and fifty thousand gold pieces, and loot from a dead necromancer named Tek, along with all the other items listed above. A very profitable day indeed, which is why I am loathed and despised by many! 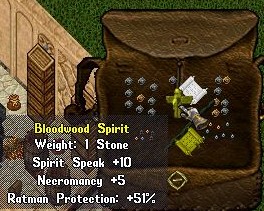 Walk in the light ye nobles, for to abandon your King may cause you suffering and grief.