Ice Island, where it is Winter year round. The cold could kill you in a matter of minutes if you're not bundled up properly. I've heard stories from amputees who said they only had a small hole in their glove, and the frostbite practically shattered their fingers. No, this is not a place for the fur-less, but I find myself here anyway, combing the island for signs of life, other than the polar bears and walruses.

I come across two dead polar bears, and I don't see any frost trolls nearby, that are also known to inhabit the island. This will require further investigation. 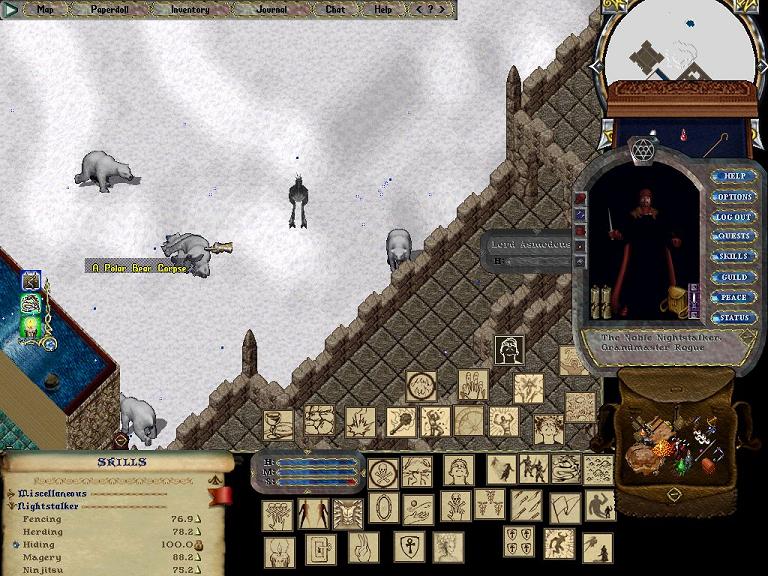 Just over the hill, I find an ill prepared woman, taming bears and commanding them to slay one another. Maybe she was intending to go back and gather their furs, so their deaths would not be in vain, but as I watched a moment longer, it was clear she had no intention of salvaging any of the remains. She was killing for the sake of killing! 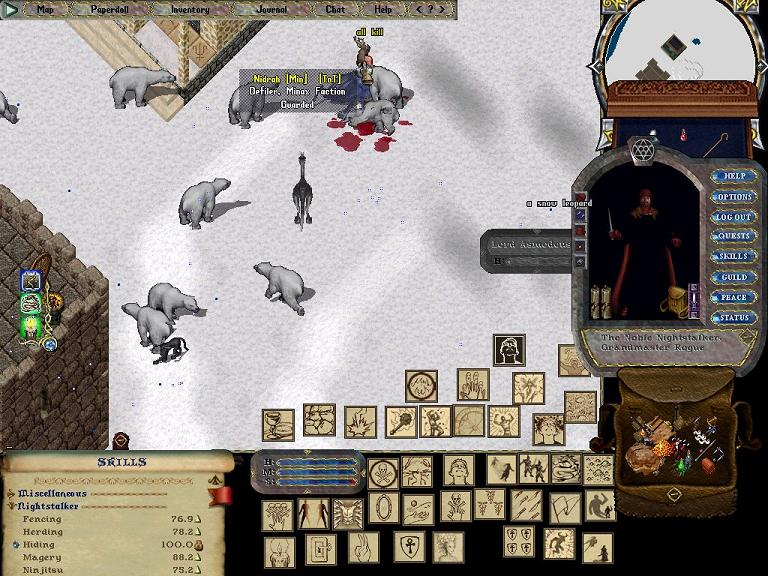 This had to stop immediately! As she dismounted her beetle, it had a Deadly poisoned star tossed at it, and she seeing this started to run. All the years of pitching on the little leauge team in Skara Brae has finally paid off... she received her very own star in the back of her neck, bypassing any armor she might have been wearing, and the poison was working quickly! 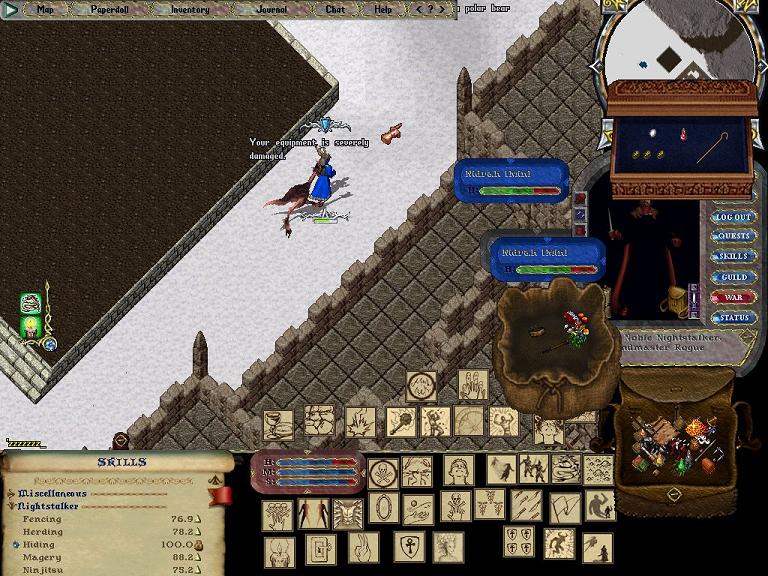 A few slices with the dagger speed up her demise, and I quickly take all of her possessions. 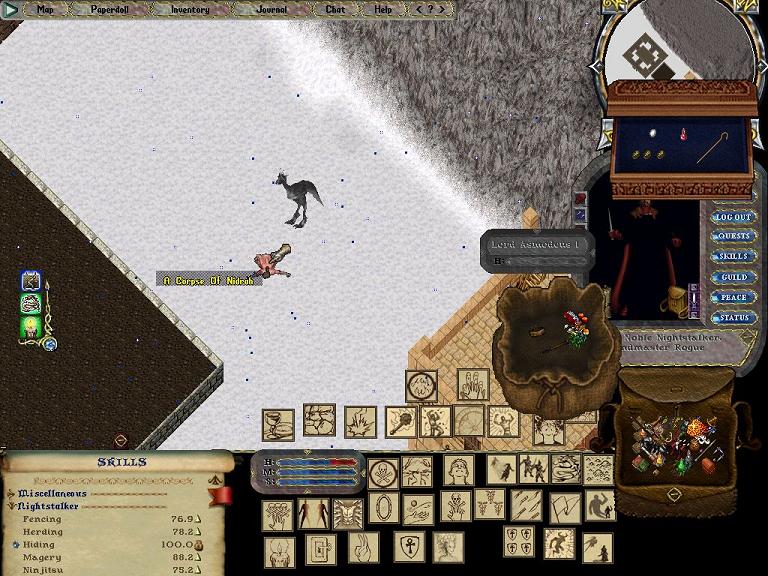 It wouldn't be long before Funkadoodle comes to her aide, and provides her a gate to resurrect. 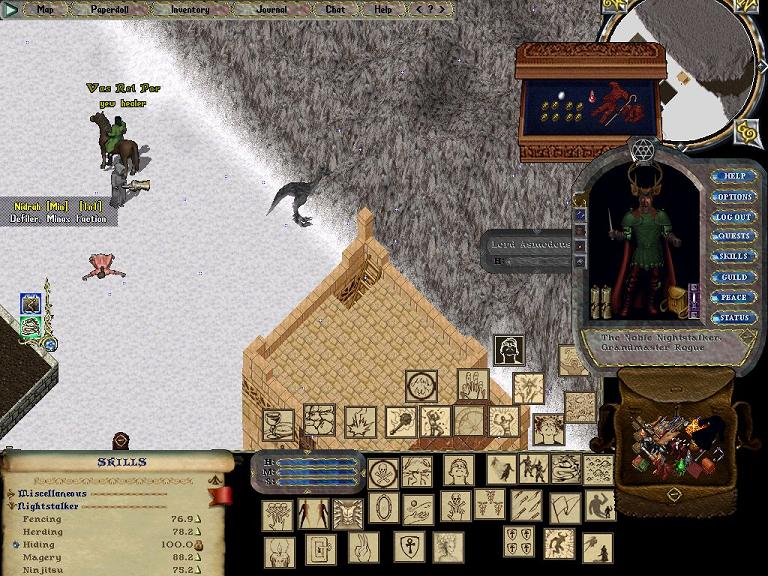 I thank thee Nidrah for the 101% LRC suit... your days of killing without cause are over!

Another senseless murderer walks this cold land. Upon snooping her pack, I see that she is carrying at least THIRTY blessed items, that alone is punishable by death, but she is also slaying innocent bears. 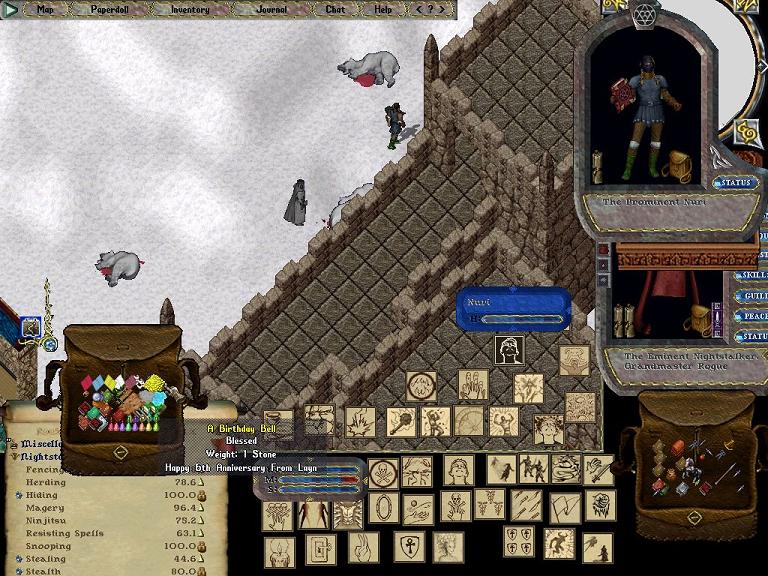 I quickly put an end to this one! 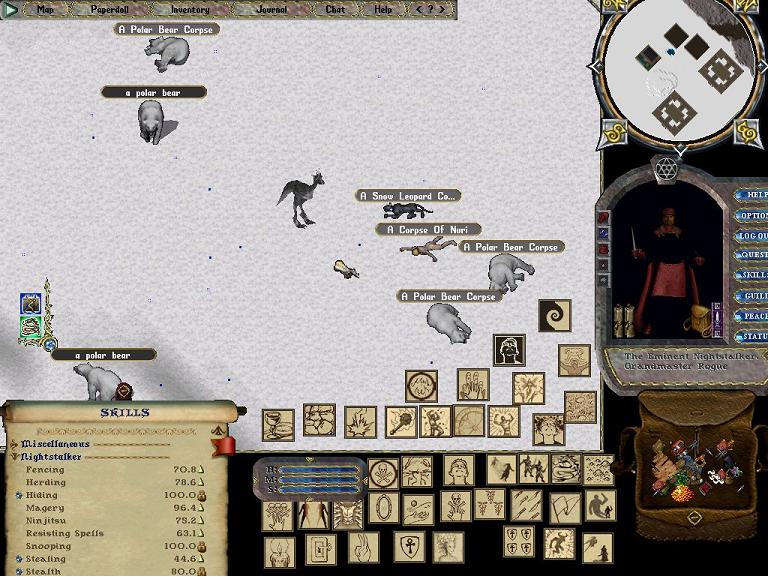 She had her three beasts attack me just before she collapsed, so in self defense, they lost their lives.

Later on that day, I was gathering hides for my good friend who supplies me with the necessary things a thief needs, when a Gilfane member runs past me.

This will require further investigation! 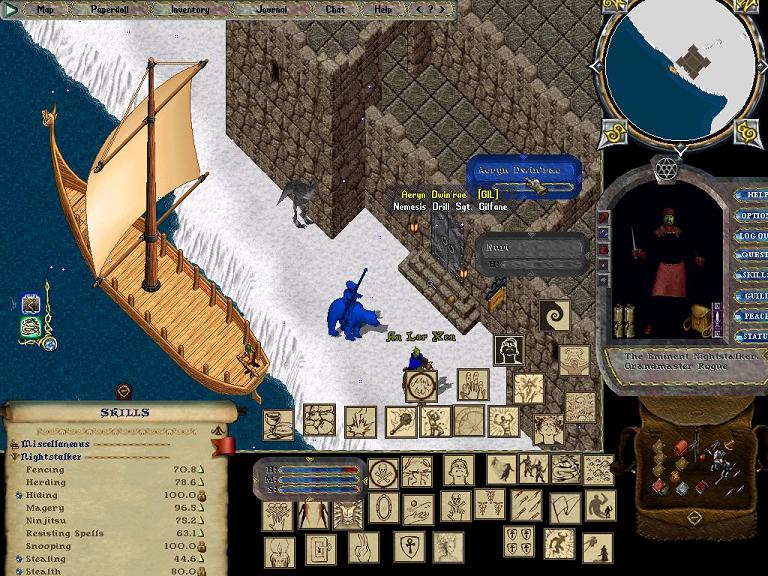 A ship and two Gilfane members casting invisibility on themselves, for no apparent reason. These two are strange indeed. I check the house sign: 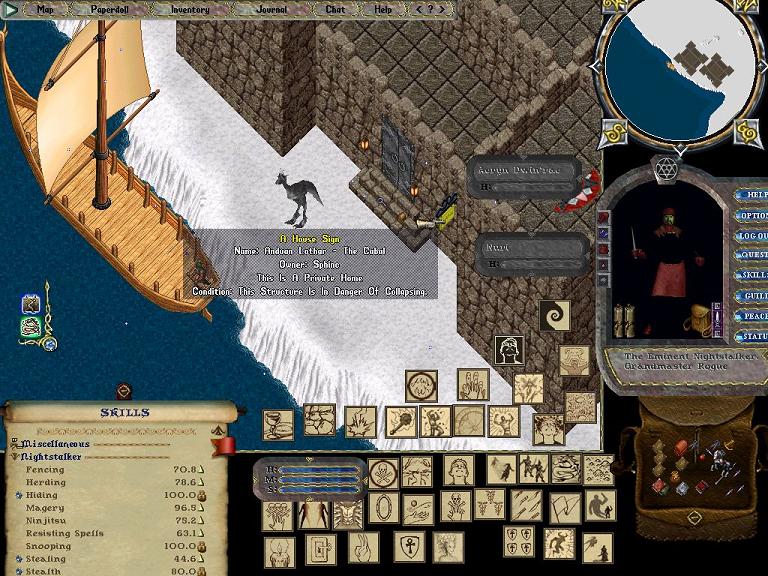 So this is the game! Why wasn't I invited? With my detect hidden skill magically stored away, I had no way to know if there were more than two of them. So I used my other method.

I prepared my blow dart gun that I stole from Death Tax only a day prior, and shot one of them with it... I got my answer! 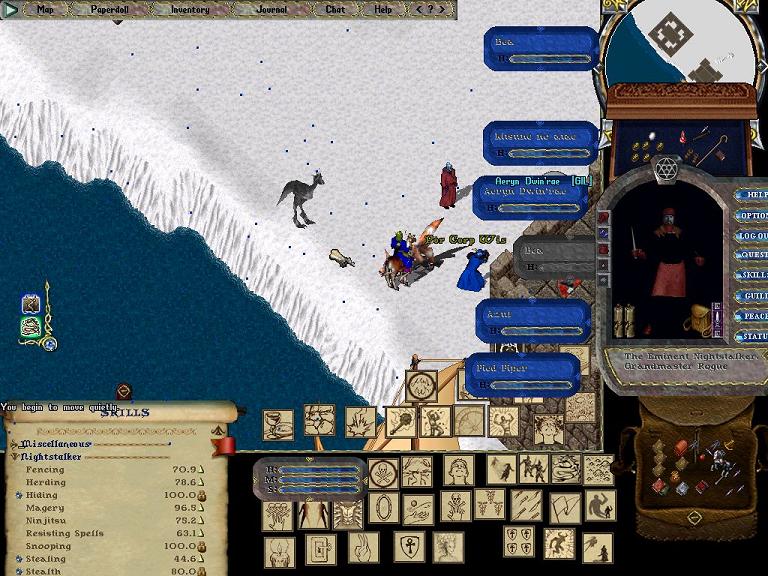 Great! With them out of the woodwork, I can snoop around! And Bea delivers!

She has all kinds of goodies in her inner pack, but with my low skill, it is best to stay with three stones or less for reliable grabs. She wont miss the 120 Provocation. 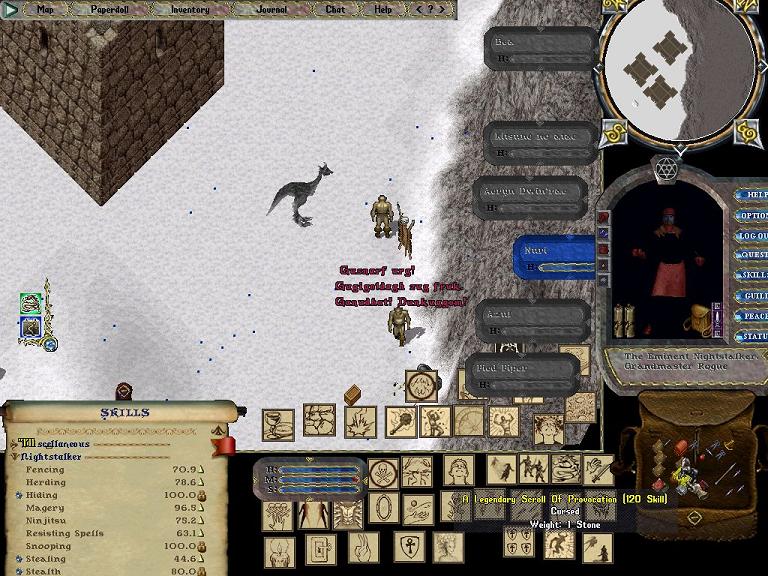 I returned from my trip home, securing the scroll of great value, and was revealed at the front door. I don't think it was necessary for an entire guild to pummel me, but they weren't taking any chances! In death, I thanked bea for the scroll, but my words were garbled, fortunately there was a healer standing two paces from me, and I was brought back from beyond, just as the walls came tumbling down!

Shivering and out-numbered, naked and without regeants, I began pouring through the boxes, trying to avoid detection. I found an entire box of Arcane clothing, and quickly put on a robe. I gathered more goodies, old school/pre patch items, many undead slayer weapons, many weapons with various charges of all types, and stealthed away to make a deposit at my house.

My arcane robe was working wonders, as I managed a few more trips. One box I noticed had over 20k of each regeant in it, I made it away with 5,000 Spider Silk.

Gilfane was relentless, they had someone detecting me every few minutes, and they pounced on me on sight, removing the blue from my health bar, and all of the items I rightfully looted from my pack.

They wouldn't even let me have so much as a box of empty pouches!

I declared war against a guild this day! 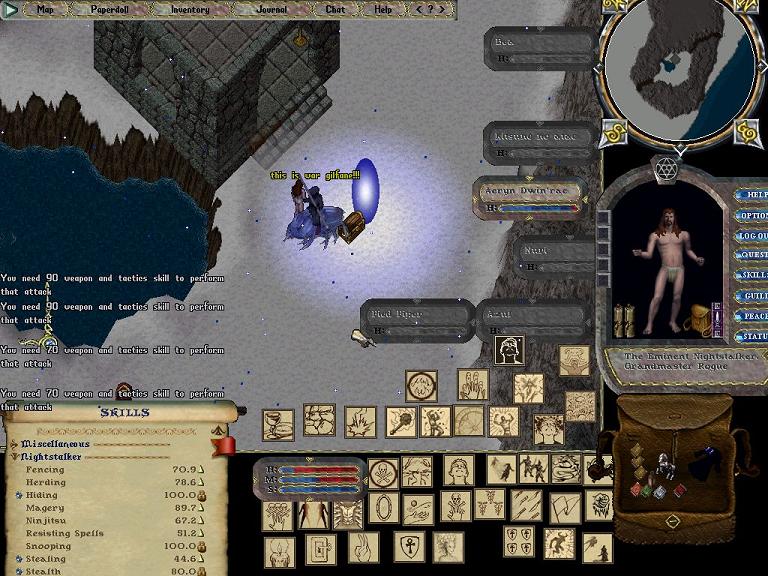 I returned to check the remains, but only found my own.

I will settle the score! * evil grin *