Episode 0104: I am The Nightstalker

Greetings, I am The Nightstalker. This is the only place you will see me
where your possessions and your life are safe, rest assured.
I am new to your World (Siege Perilous), but I have existed in another for quite some time.

Fear the unseen, let your eyes adjust to the dark, for to ignore what lurks in the shadows
may very well be the last mistake you make. Case in point:


Here we have Lady Queen K. Very "safe" under the wings of her greater dragon "BigT": 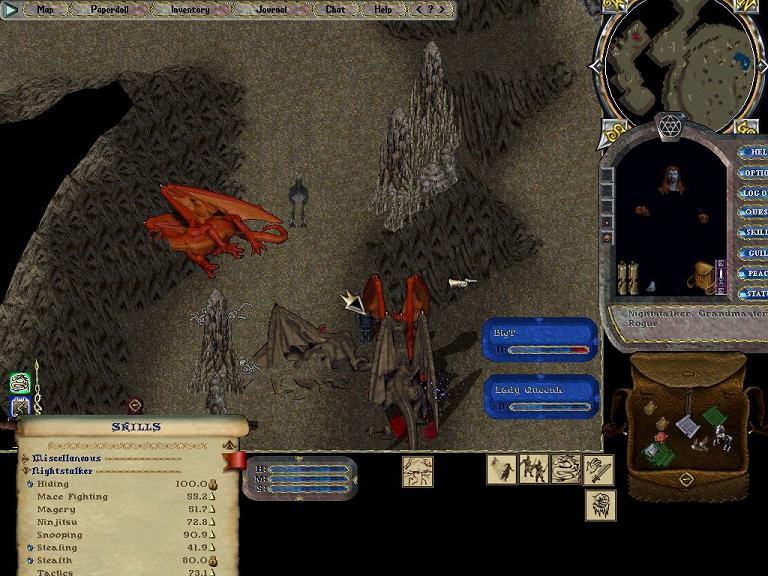 Easily slaying dragon after dragon, FORCING her dragon to kill his own brothers and sisters, while ripping the
treasures out of their still warm clutches, BigT pleads with her,
"please master, please don't make me kill any more of my kin to appease your greed".
"Shut UP and kill me another one, lest I turn ye into dragon soup", she shouts at the magnificent beast!
A single tear wells in my eye... oh no, not for the dragon... for the strong yet simple display of cruelty that was
infested in "Lady" Queen K. I knew now what type of woman she was, so I also knew that she'd understand
what was about to happen, and not condemn me for it. 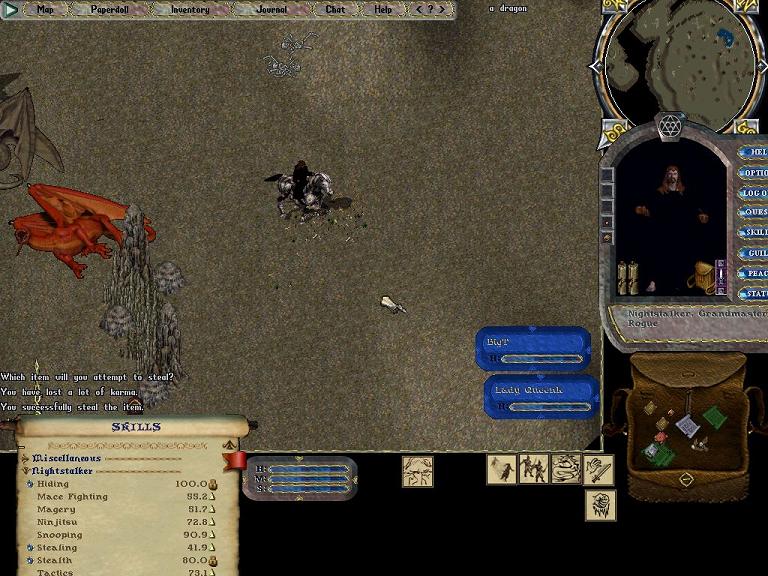 I relieve her of the treasure that she so wrongfuly obtained, and went back for a second helping.
Unfortunately, I stumbled on her, revealing my clumsy self to her and her depressed beast.
It was enough to spook her into fleeing the three dragons she had just had slain,
and she moved down to the Shadow Wyrms Lair, supposing I would leave her alone,
assuming I didn't track her every move. I arrived just in time to watch the Ethreal Beast fall,
and I stumbled on her yet again ( doh ). Quickly I vanished back into the shadows before she could
sick BigT on me, and just as quickly she panicked and went down yet another floor, into the ANCIENT WYRMS lair.
She ran south past the Ancient Wyrm, hoping I'd think she jumped the sparkles, but again,
she didn't count on my magnificent tracking abilities ( which I trained today from 0 to 50 ),
and I saw through her trickery. I arrived just in time to hear the blood curdling sound
of an evil "Lady", as the last breath of air was violently pulled from her ripped lungs. *greedily rubs hands together*

I could hear the conversation between the Ancient Wyrm and BigT in the distance,
"Please Father, I have sinned against you and all of my kind, please destroy me
before that wicked woman causes me to kill again, I will not resist you.
Please tell Mother I love her, and that I am sorry"

Oh shit, I'm not going to have much time to loot if he doesn't put up a fight! 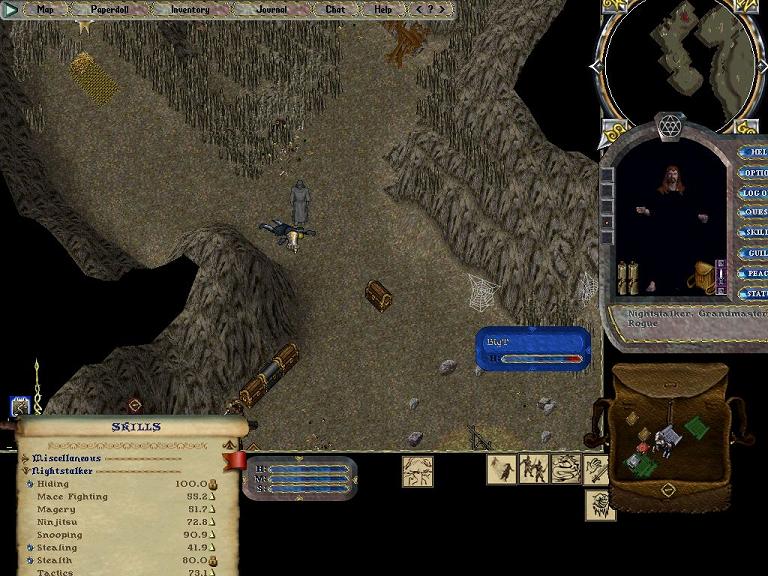 But loot I did!!! Until the Ancient Wyrm came to check on the corpse of Queen K. I quickly vanish before his eyes,

and he turns away, satisfied at the sight of her smoking corpse. 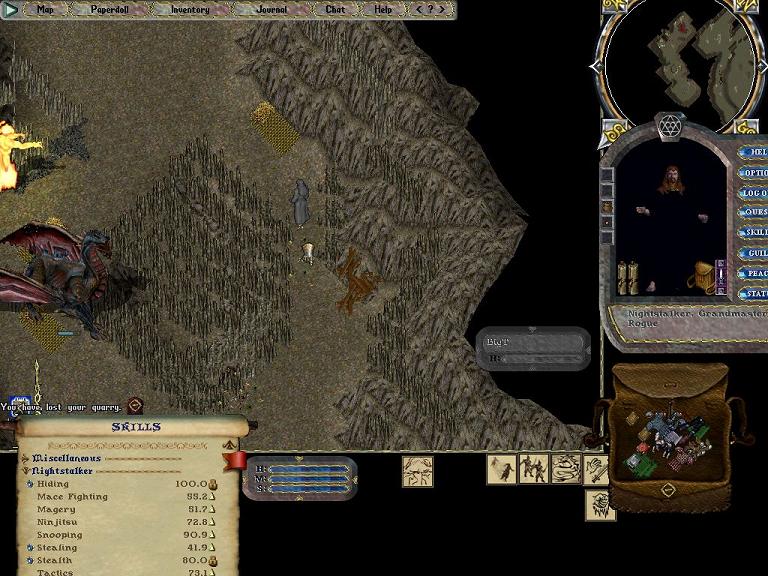 I go back to finish the job:

Now the tricky part... how does a clumsy THIEF such as myself weave his way through this fire breathing maze? 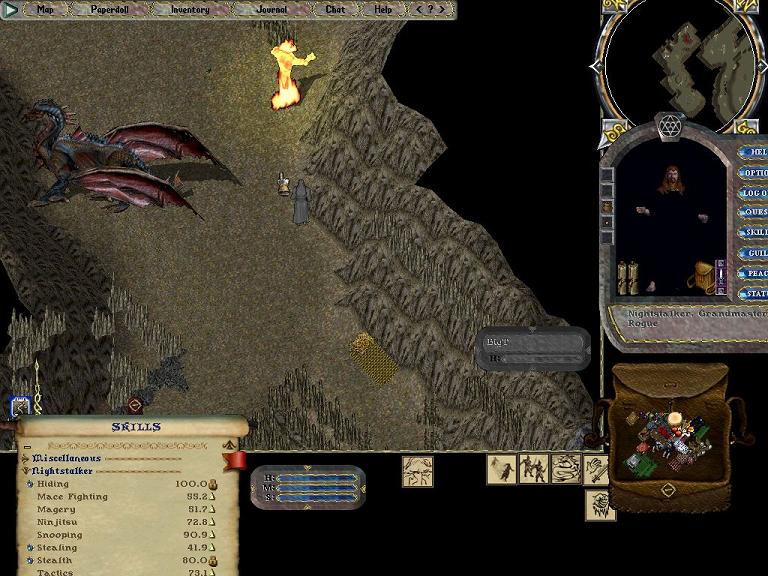 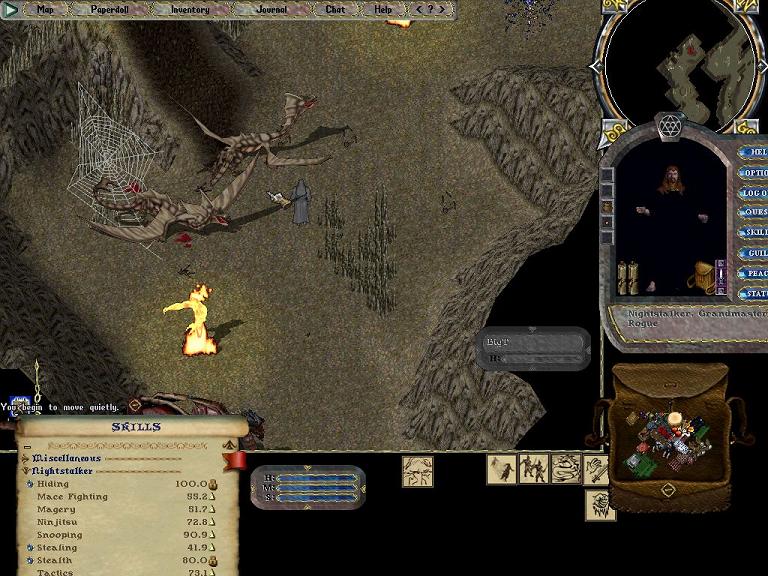 And I am relieved to find the corpse of the Shadow Wyrm still laying there: 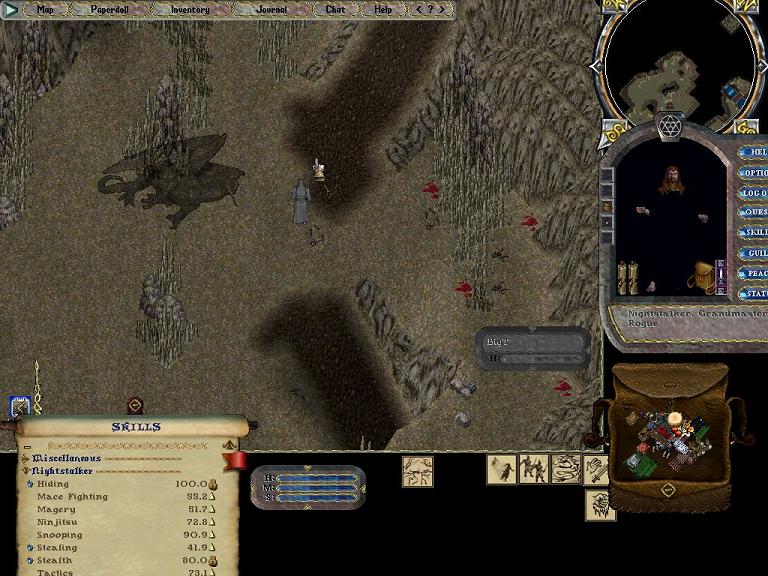 Now, if I remember correctly, Queen K got in quite a hurry, and didn't loot the three dragons she had BigT kill for her

For shame! I guess I will have to see what she left behind!

And here she is, making her way back to her dead dragon. 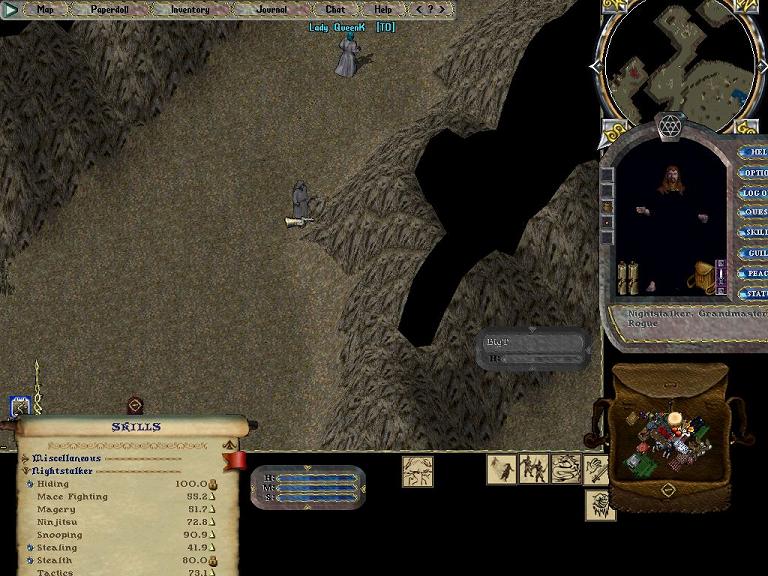 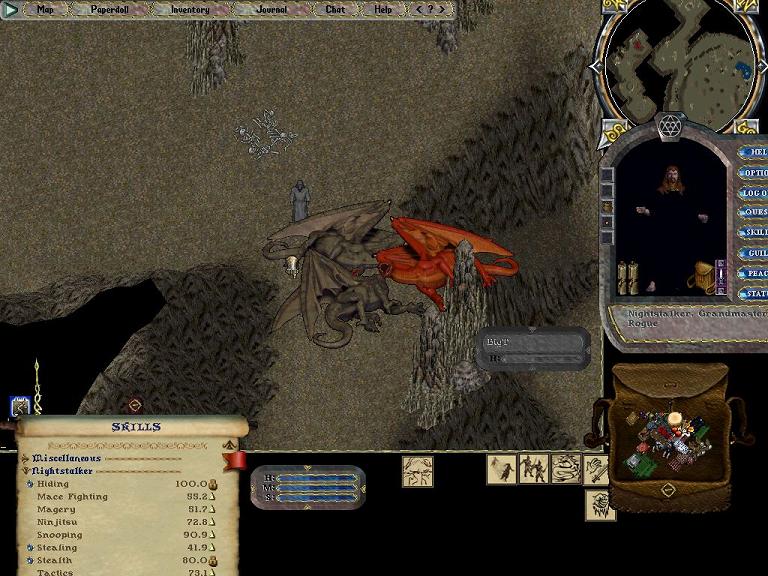 She called for reinforcements, but it was too late. He opened a gate for her
( As I had Taken about 200 of each regeant off of her hands )

and he dashed into the cave to find me. 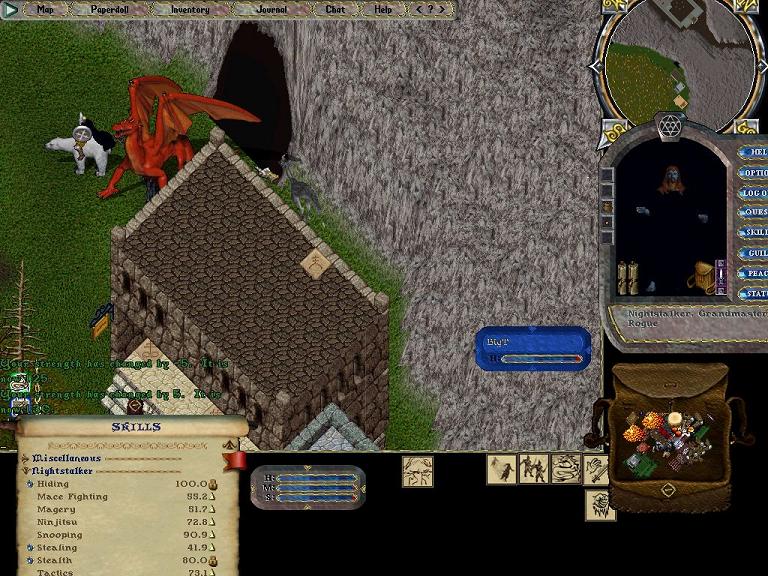 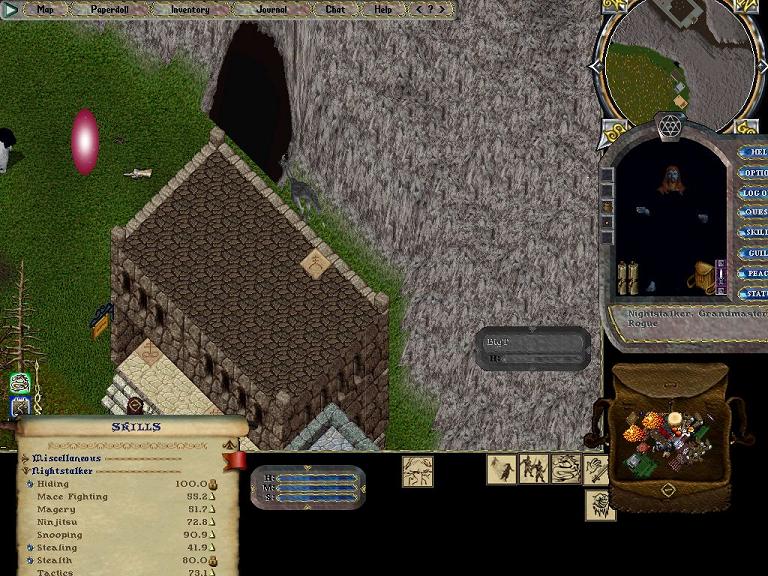 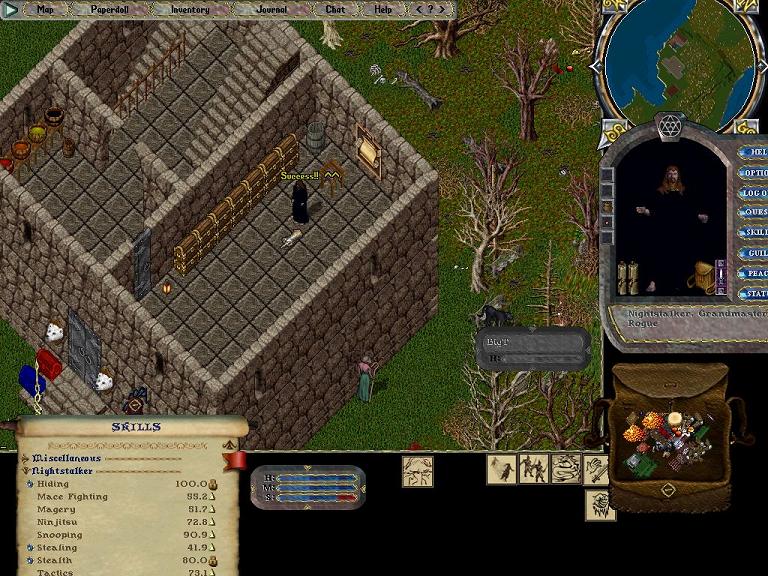 I took the long way home... I found a nice Ring of the Elements "just laying there", and a nice Tamers/Mage Bracelet too! 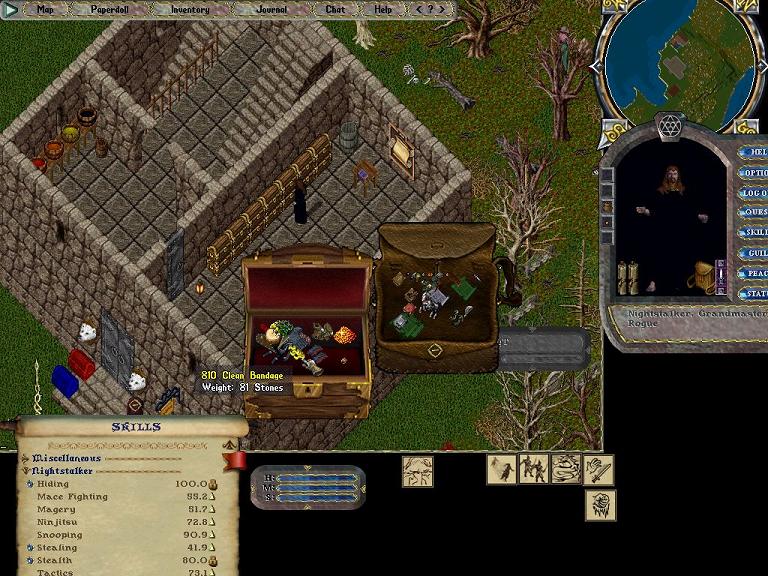 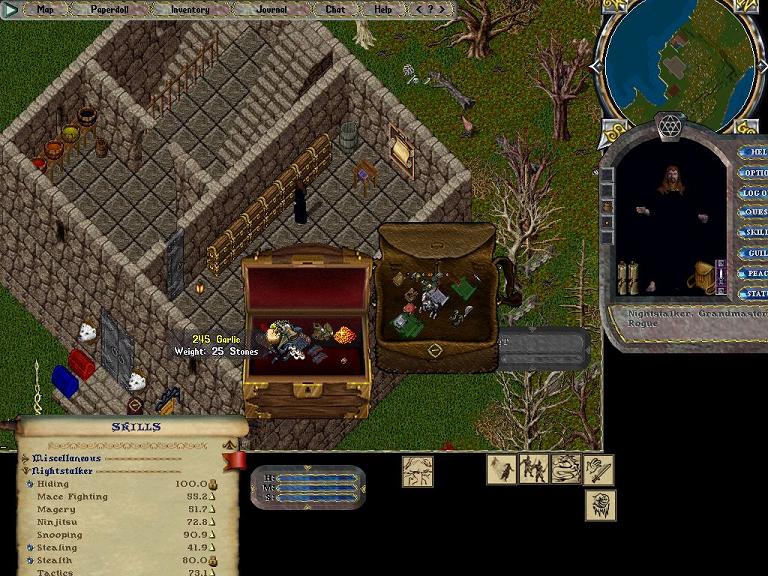 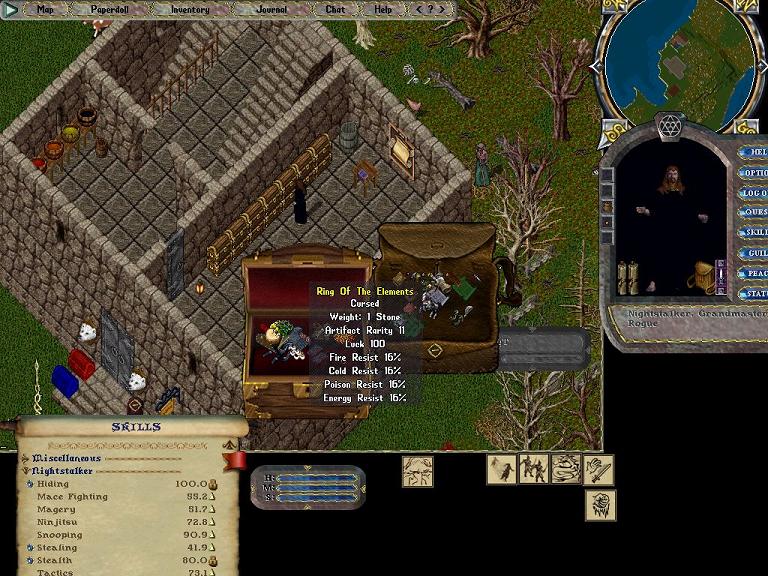 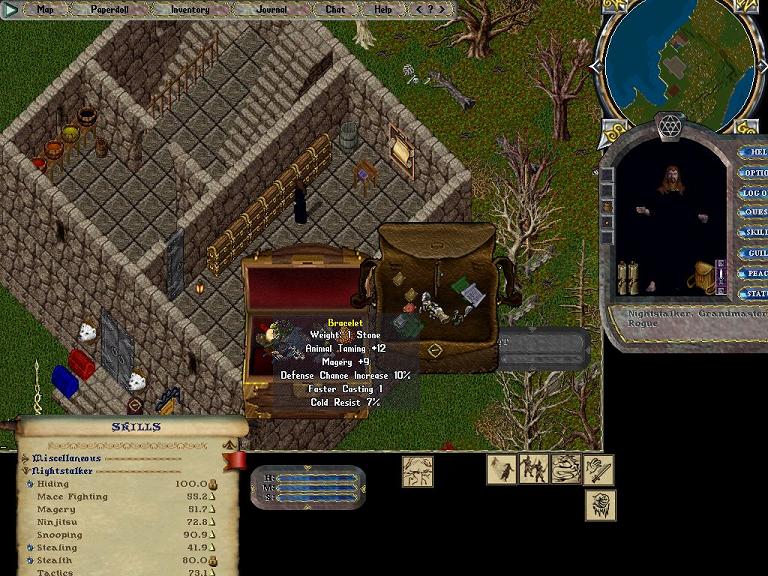 As I said, fear the shadows, for you may be next!