This story concludes with little fanfare.

It has been 3 days since my public lynching on Stratics. The verbal outrage pointed in my direction may be a bit muted at this point, but my sources tell me that boycotts of both the Barter Town Casino and The Black Market (and Barter Town in general) are mobilizing as we speak. The torches and pitchforks are out in full force and I could swear there is a bounty hanging over my head. It's going to be rough being a thief on Siege Perilous for the foreseeable future.

We jump back into the story now where Part 1 left off: 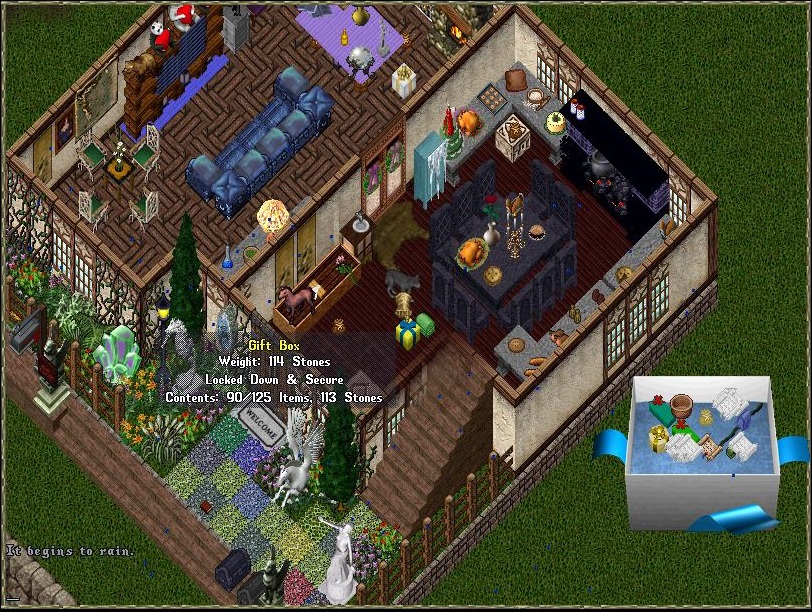 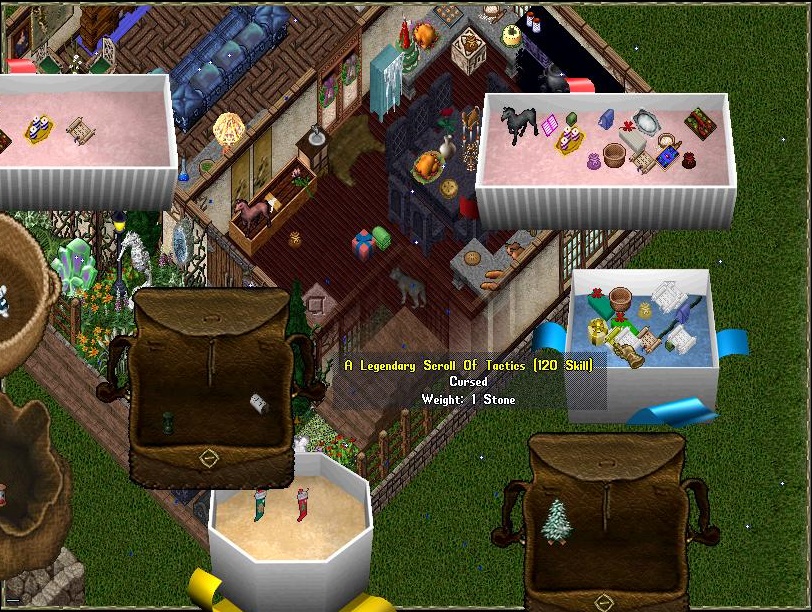 The box was initially secured 18 days prior to the theft with exactly 88 items inside. Over subsequent visits, I watched the count drop 1 item at a time until it bottomed out a 81. To my surprise, the item count then began to climb, eventually settling on 90 items when I would finally be able to get my greedy paws on the contents. And on the 18th day, after snooping the backpacks of many unsuspecting visitors, the security settings on the gift box had suddenly been changed and everything inside was mine for the taking. The Good News: There was a brand new stack of various power scrolls and a Codex of Virtue now in the box. The Bad News: The 12th Annivesary Ticket, Heritage Token, and snow & grass tiles were all missing.

(You win some. You lose some.)

The initial outrage had been vocalized on Stratics for all the world to see and at the same time, some people in General Chat™ were cautioning Kattastrophe, advising her to hold off on taking the Blackjack deal until she was sure I was the thief. Presumably, the idea was that I may have spotted the initial thread she started, decided to pretend to be the culprit in order to lure her to the casino under false pretenses, and leech some gold out of her in the process. I decide to put this rumor to rest and post a complete list of everything that was taken:

Ysabella: After reading this thread I am almost speechless and thoroughly disgusted. Katt, I find that the only fault on your part is you being too trusting, and truly there is nothing wrong with that either. Chad, you knew you were taking great/too much/over the top advantage here and yet you still went through with it. Then you spread your blackened peacock feathers out and proudly display what you took. Even amongst thieves I have known, there is an honor system. Then, there is YOU. YOU, who wants to gamble the things away to her? YOU really are one sick puppy. The more I write, the angrier I am becoming, so I think I will stop now, but for this last thing..... Katt, I beseech you to rethink this, and play no part in this gambling farce! I know you want your things back, but this is just playing more deeply into Chad's hands, it's what he wants, he gets his kicks off it, and I really don't want to see you done wrong again. I am taking this list of his, and hope I can give back at least some of what he stole, back to you.

In the end, Kattastrophe makes an executive decision and while a few cooler heads prevail, they still seem to be in the minority:

Kattastrophe: Honestly, the only reason I was going to do the Black jack deal was because I didnt want you guys to give me items for my mistakes. I won't do the black jack deal for several reasons, I am a person that tries to do the right things, I thought that I was doing the right thing by doing the black jack deal, I guess not. so I am sorry. Along with this I do not want anyone giving me anything. This is my fault. I thank you all for standing up for me, as it really means a lot. Now I understand that doing the deal would be a mistake and to the people that gave me gold, I will return it asap, I just want all of you to know that I was just trying to do what was right. Have a wonderful day.
Freja: Katt, there is no shame in accepting stuff/money to help you get your stuff back or stuff to replace it. You do alot for the shard, now let us help you. I understand the ones who say, you should not do the Black jack deal but Chad may make more money from selling your items, so I see nothing wrong with this. We all make mistakes, you learned to be careful who to trust. I learned in the past, to double check, that I remember to Siege Bless my bow after I let Tina repair it. I know all are shotting at Chad now. I don't know him well enough to know if he really are that heartless or he only play with your feelings, like thieves love to do. I still believe it can get a good ending, even when Chad may make some gold from it. We are there for you and many of us do have more gold than we need. Go for it, don't let people tell you what to do, it is Siege and evil RP is allowed and if you can get it back for a mill or two, I gladly help with the gold. Lets stop making Siege to Trammel and play the game. A little Evil RP do not hurt, special not when she are offered a way to get her stuff back.
Incognito: He's admitted to the theft. He's given a way to get the items back, consistent with his character. I feel satisfied that Chad has lived up to his personal code of honor even if it does not match up with my own.
Podolak: Katt has made her feelings known. It seems to me a 13 year old girl has more sense than all of us "adults" put together. We are just trying to make others understand our opinions, a fools errand really. I don't agree with Chad's actions and stand by my first post in this thread but he came forward as the culprit, that shows more maturity than some. Maybe it is just to boast about the theft? Perhaps but our opinions on the matter are exactly that, opinions.

So with the Blackjack deal off the table and impending boycotts on the horizon, there was only one thing left to do: 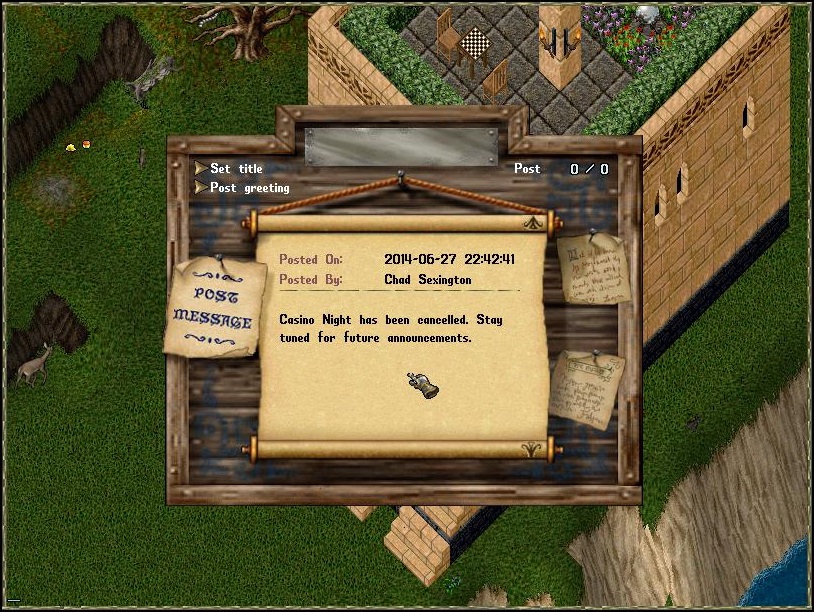