This story picks up 10 days prior to my public lynching on Stratics. For the past 8 days, I had been making routine stops at Kattastrophe's house (among many other stops which make up my daily rounds) with little success. While I've spotted a few people in the house, snuck inside, and snooped their packs on multiple occasions, to their credit, NBT folk are usually pretty good at thief proofing their packs.

And while I could go through a few failed steals involving visitors to her house, let's just cut to the chase. This story picks up on the 2nd floor of Luna Bank where I spot Kattastrophe making small talk with someone I've never seen before on Siege Perilous. 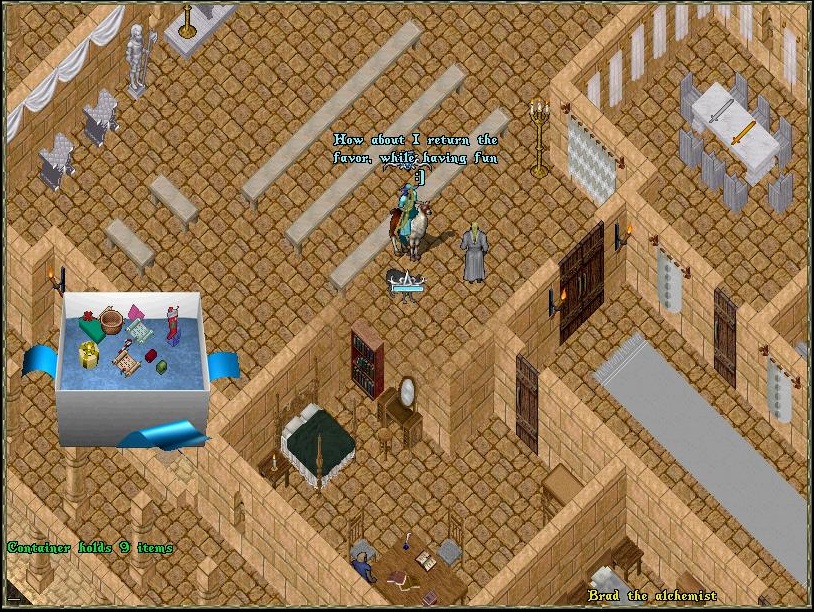 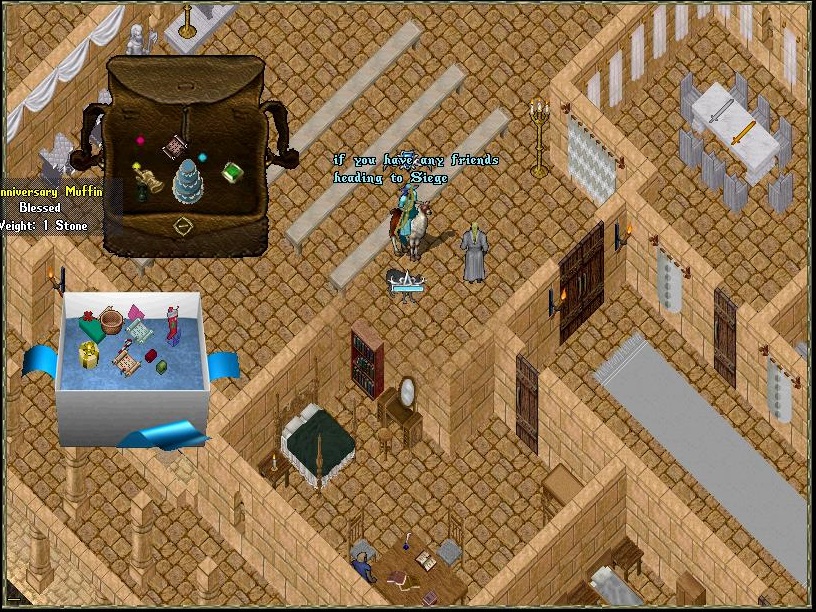 A bag, a box, a holiday stalking, another box, inside another bag, with another box next to it! It was abundantly clear that I had stumbled upon a cross-shard holiday/anniversary gift exchange! It was a gold mine of treasure -- including a 12th Anniversary Ticket and a Heritage Token -- and 95% of the items were blessed.

On the other hand, this also meant that 5% of the items were mine for the taking. I just had to dig a little deeper. 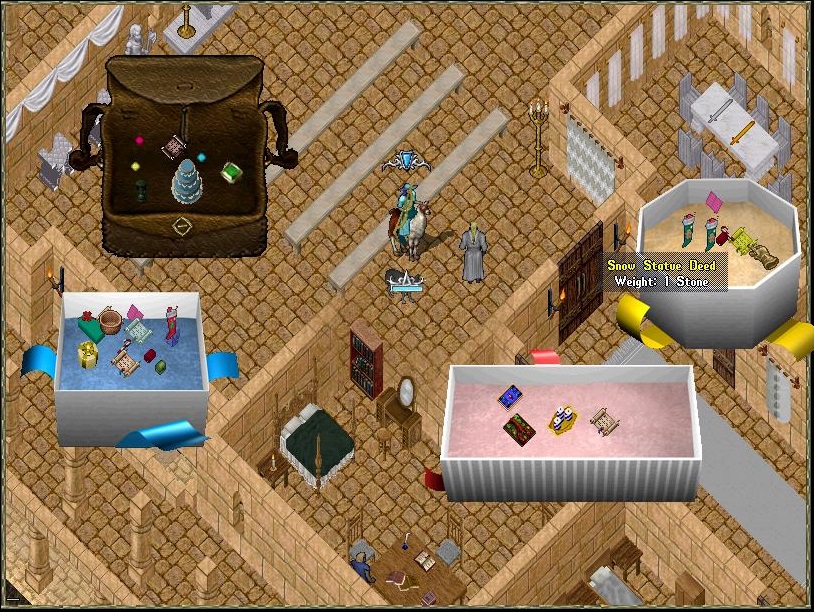 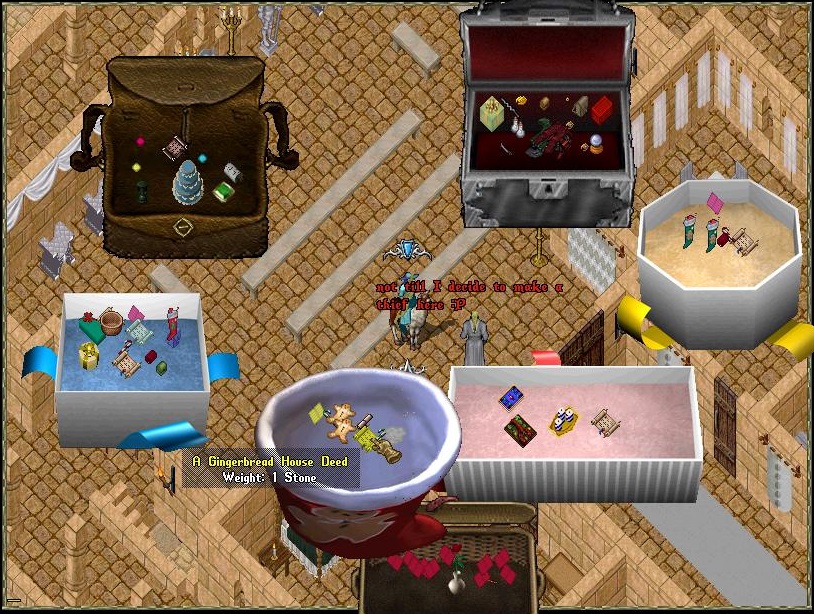 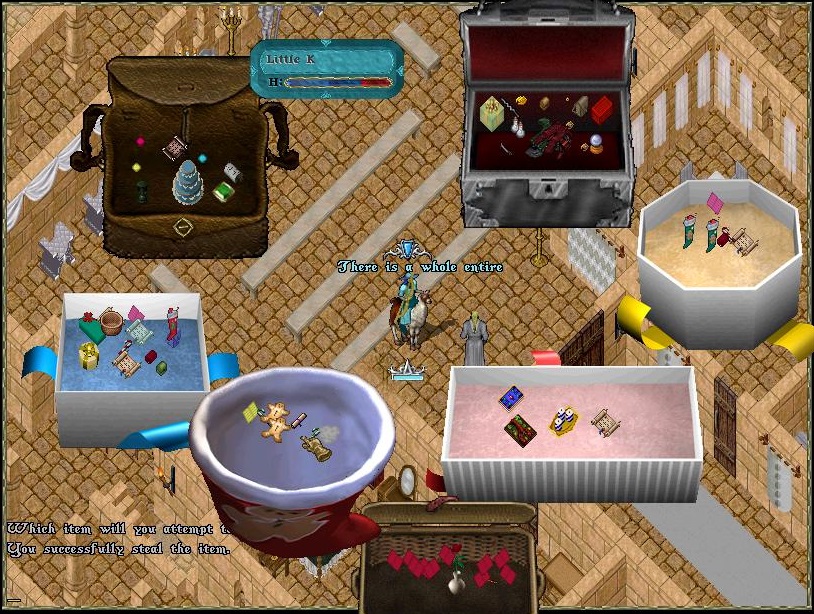 It's times like this where there really isn't a Plan B or Plan C.

There is only one course of action: keep stealing 1 stone items as fast as you can until your luck runs out and the guards introduce their stupid halberds to your stupid face. 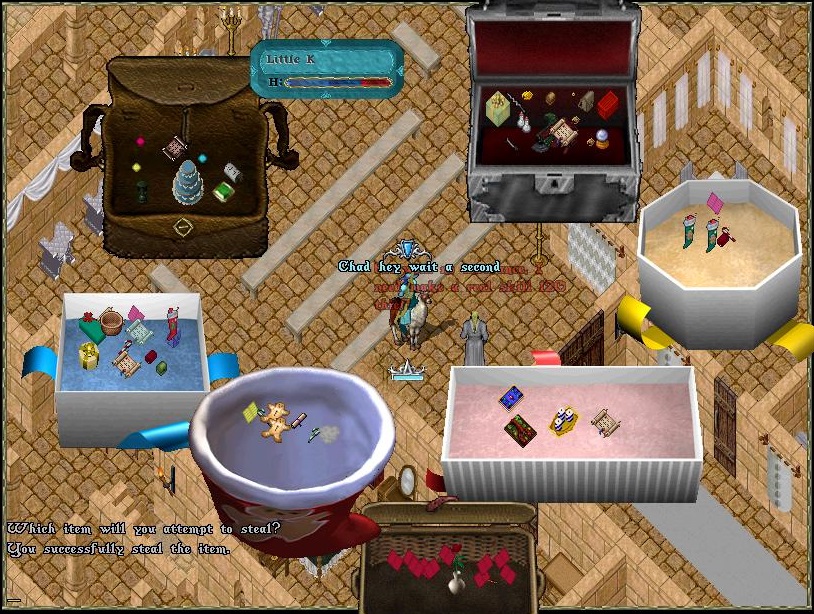 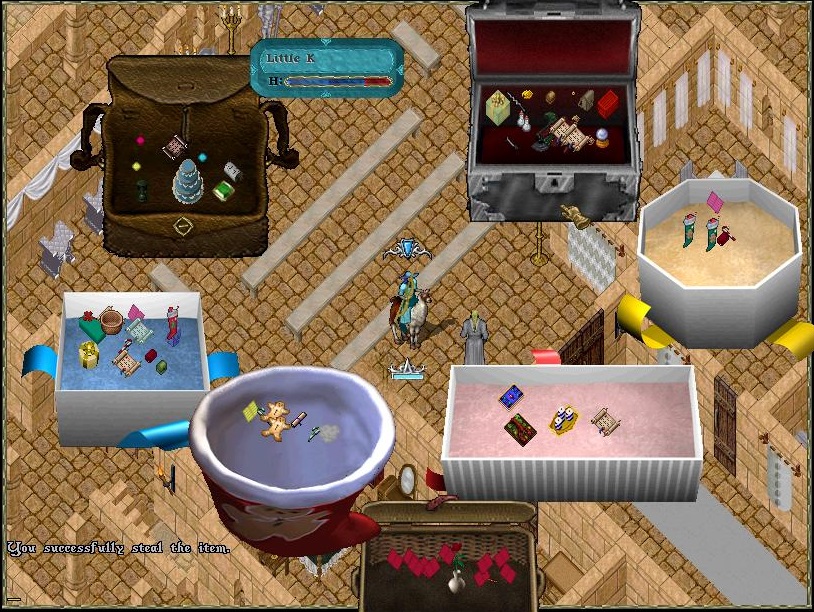 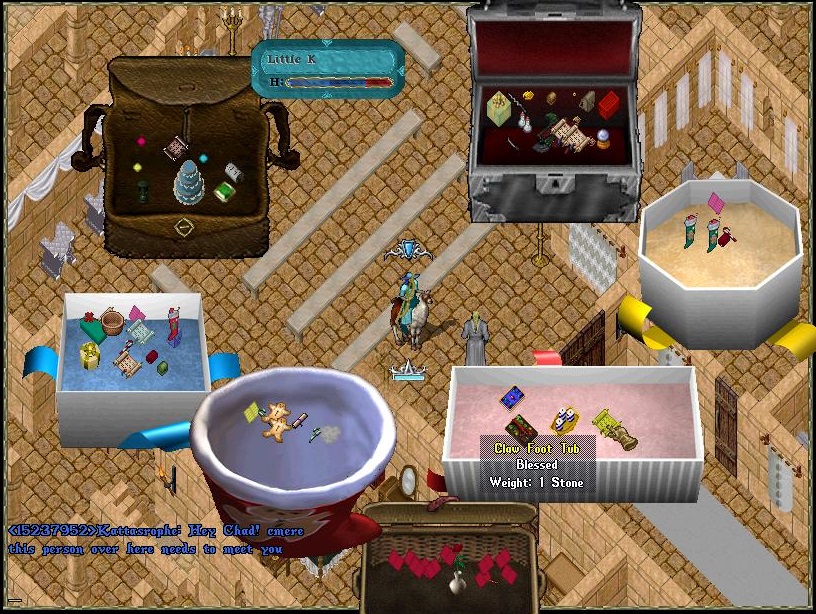 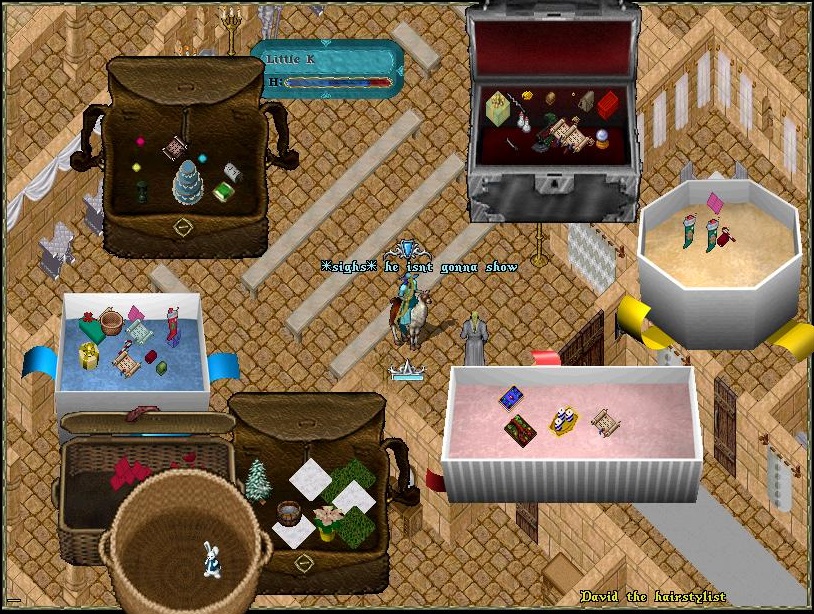 Not going to show? 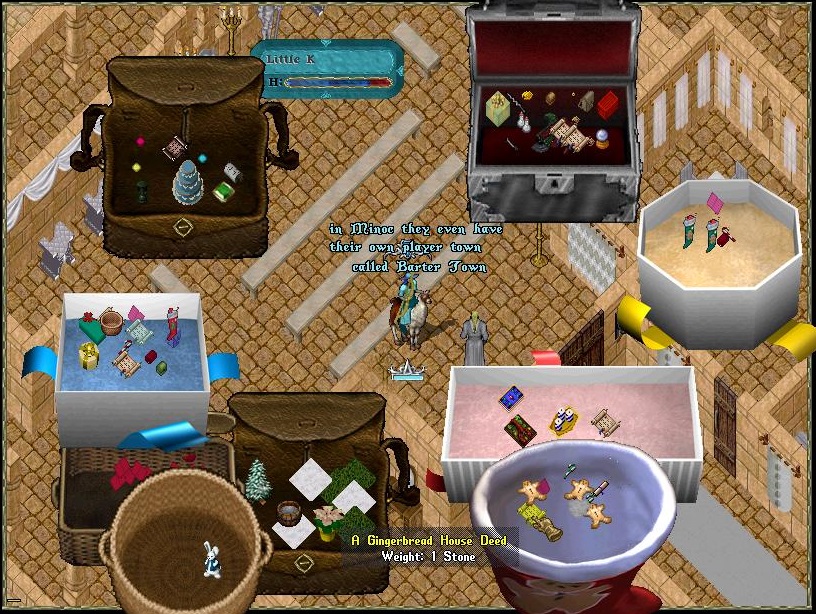 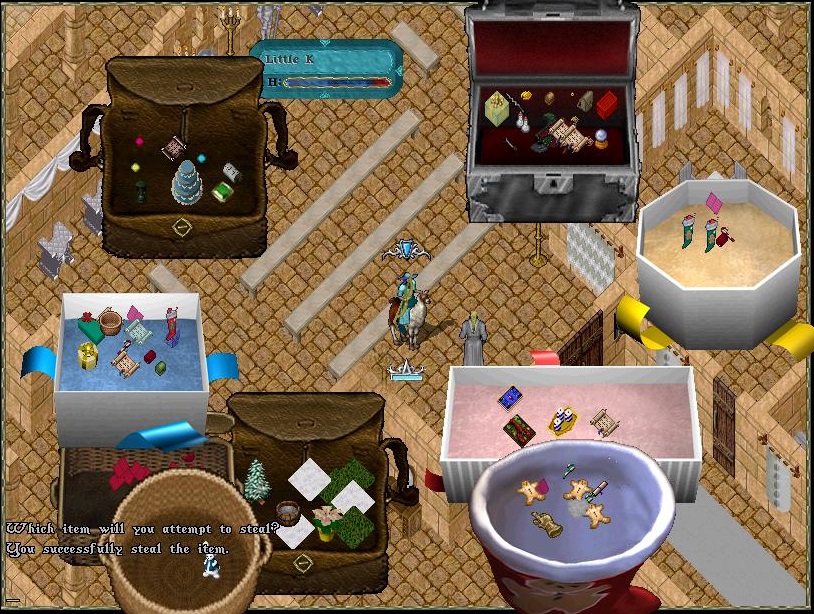 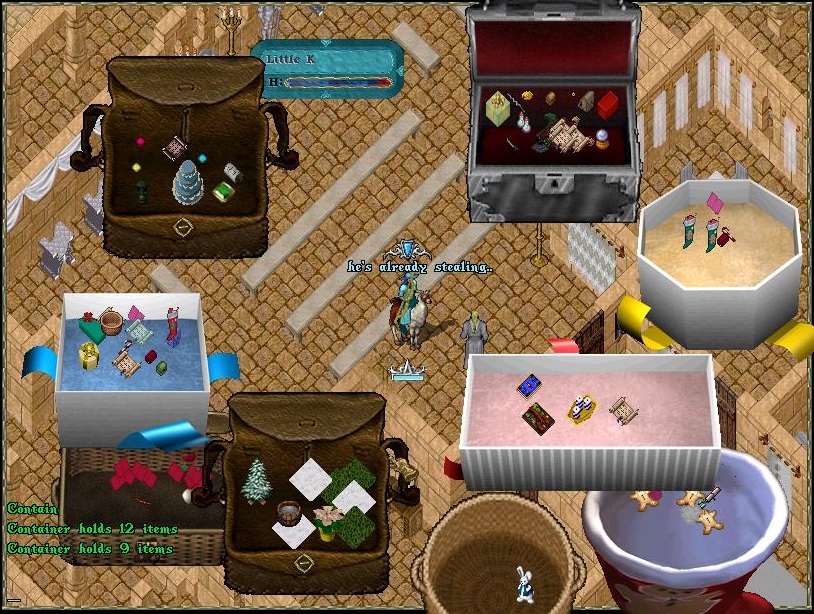 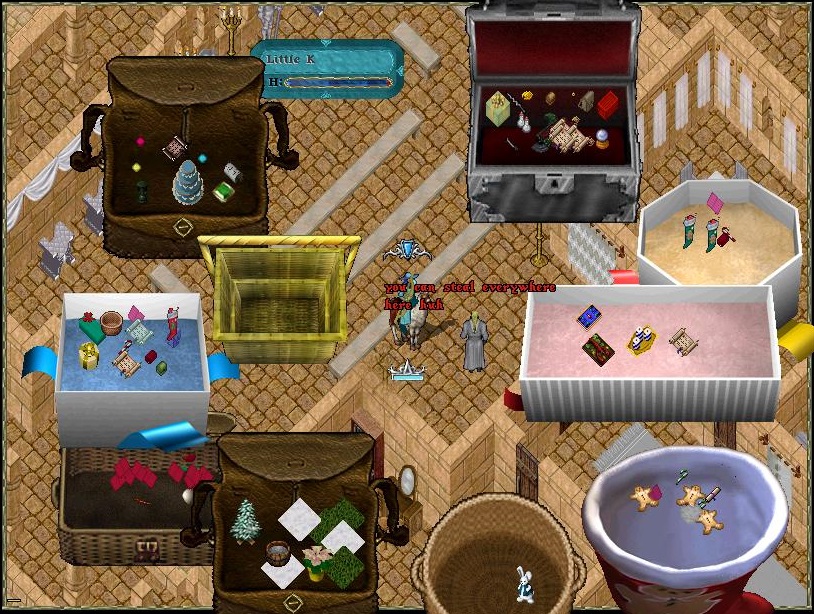 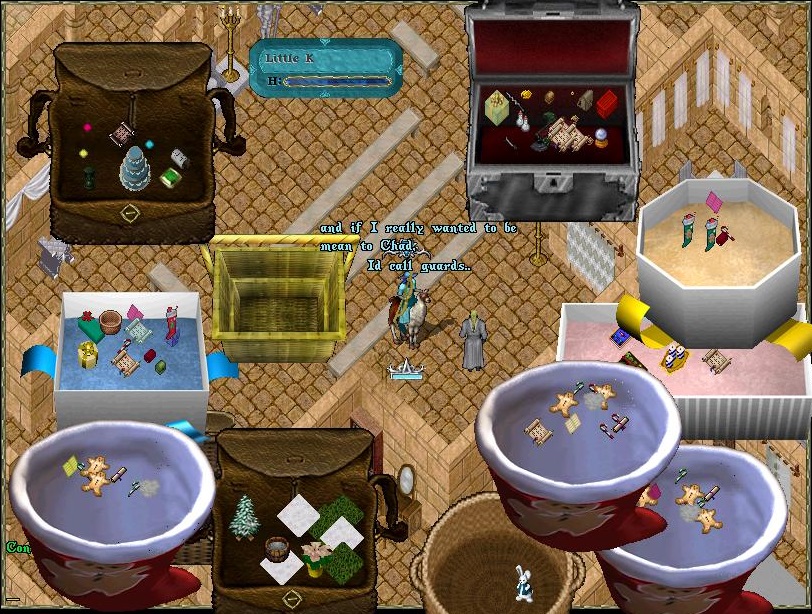 You know, if you say something like, "...and if I really wanted to be mean to Chad, I'd call guards." Then you did actually call for the guards, right there, just the same. If I had failed any of my steals thus far, I would be face-down on the ground and punished for my crimes. And maybe that was the point? 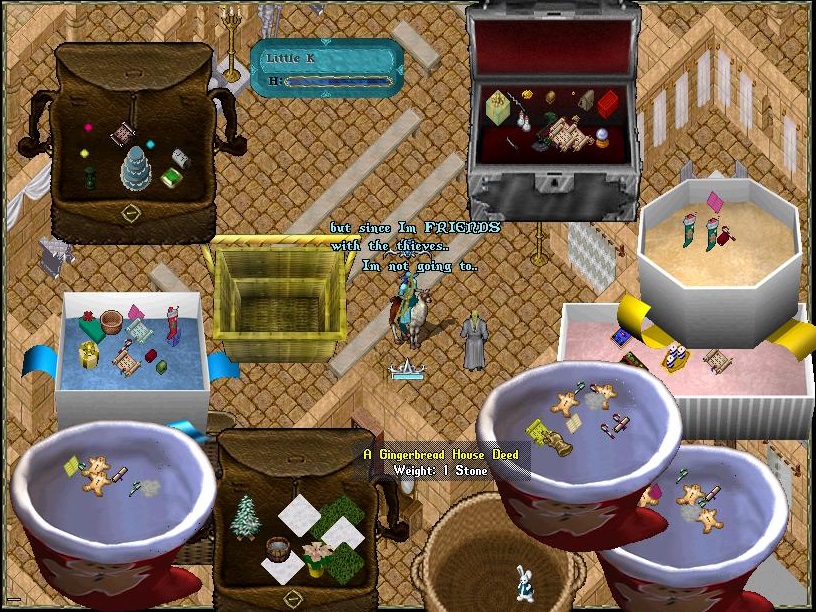 But you did call guards.

(It's so hard to keep these things straight some times.)

Anyway, where was I? 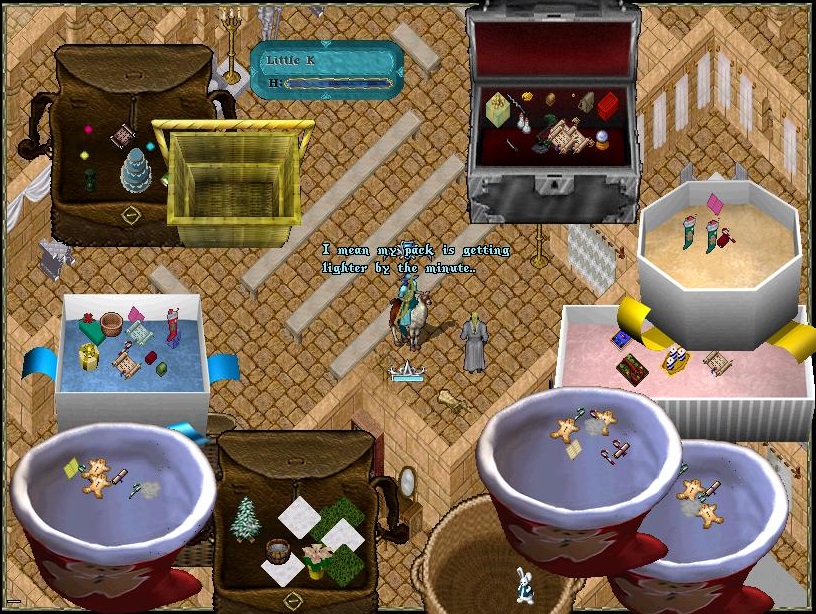 At this point, she's side-stepping here or there while shuffling a few items in her pack (trying to spot the unblessed ones to bank them), but she's unable to spot them all before I can get to them. All she really knows is that the item count in the top most gift box has been dropping 1 item at a time for the past few minutes. 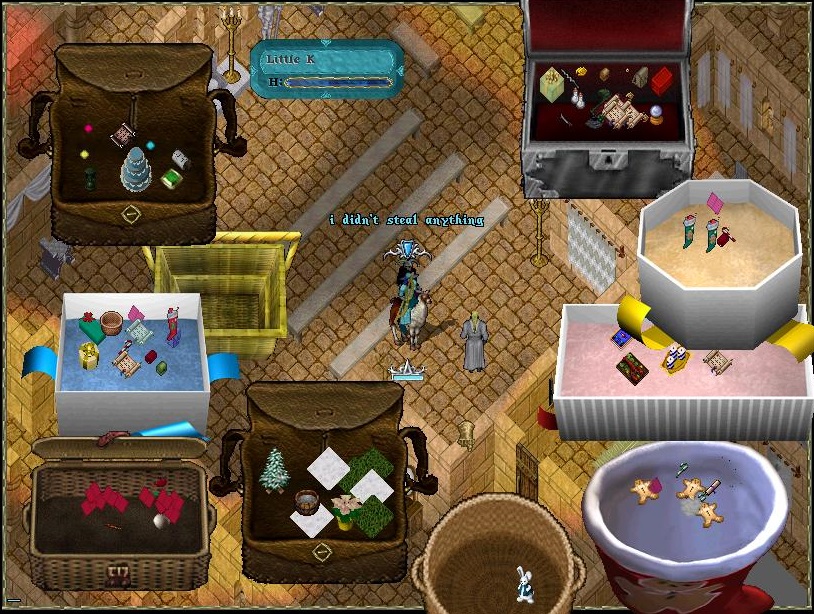 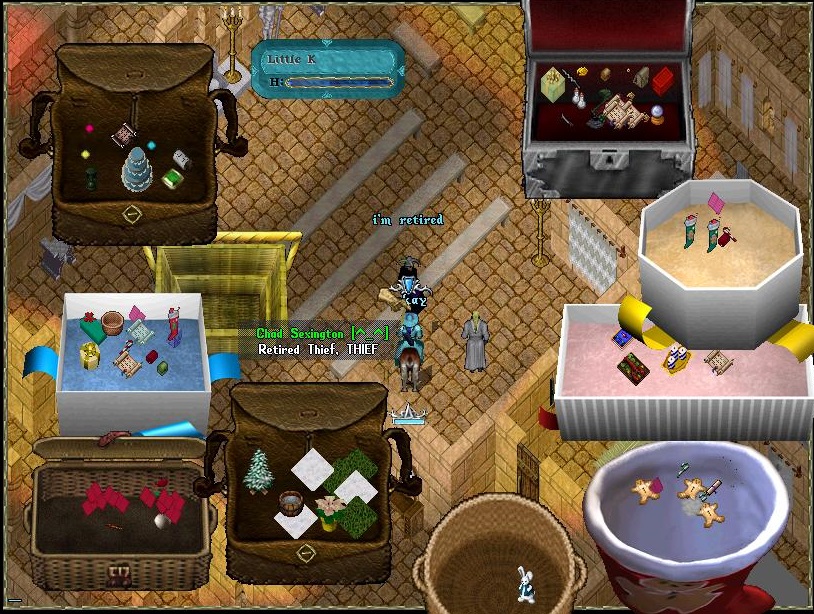 This dance continues for the next couple minutes. She dances around a little, avoiding me, as she answers more of Little K's questions about the shard. While I hide, circle back around, steal, and bank item after item. 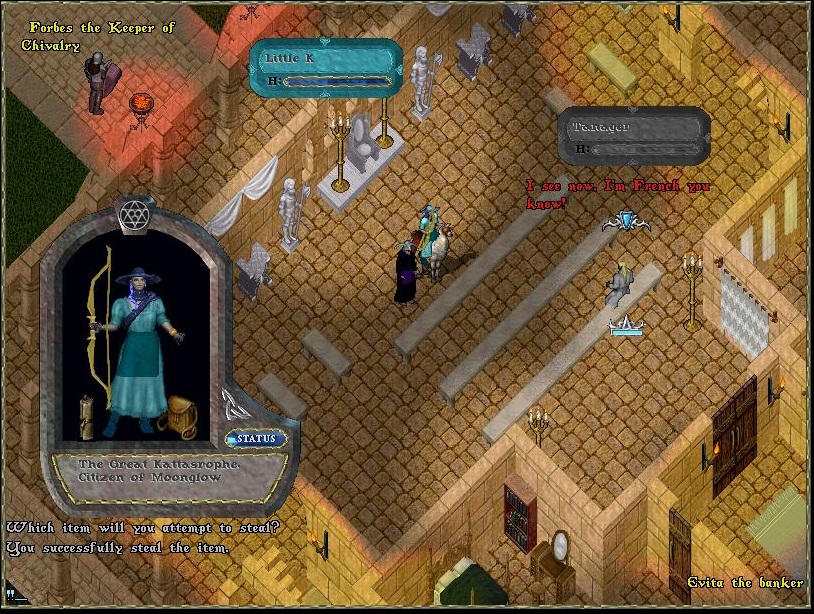 (Candy Canes are actually worth 2500 Spring Cleaning points, which isn't an insignificant amount of points.) 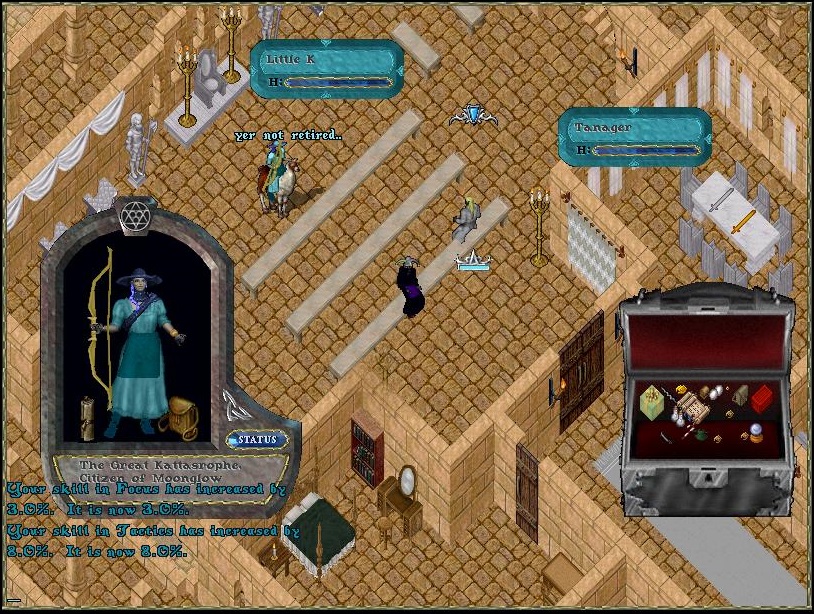 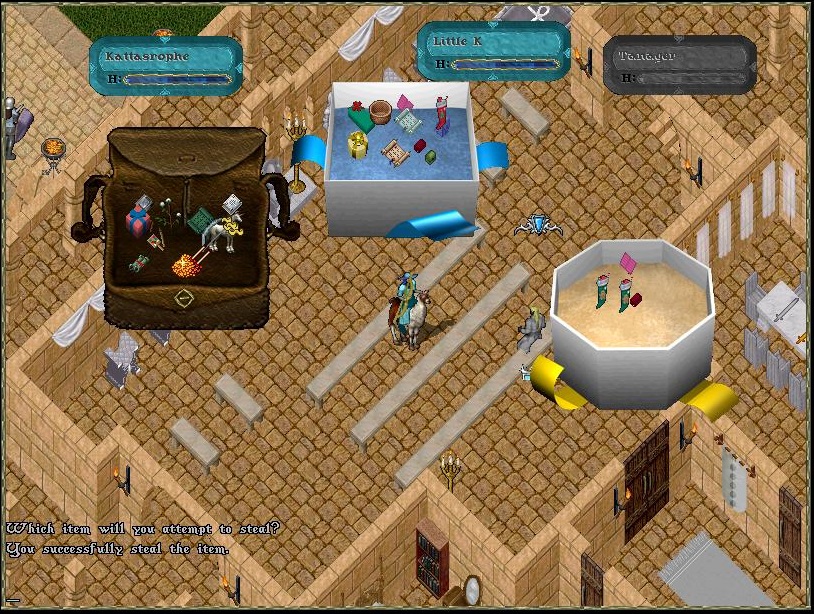 And I think that's it.

(FYI: Candy Canes come in 2 varieties, 'blessed' and 'not blessed' depending on which holiday season they were given out to players.)

Unfortunately, even though I was able to pick up a Snow Statue, 3 Gingerbread Houses, and 5+ Candy Canes, the rest of the items were off limits to my greedy, greedy paws.

But I wasn't done yet. It sounded like the conversation with Little K was winding down so I immediately gate to Kattastrophe's house and prepare for phase 2. The gift box in her main pack was still full of 90+ items. And the great thing about overloaded containers like these is that there's a good chance that the container will be dropped on the floor and locked down instead of being stuffed into an already secure container. If my instincts about this are right (and they usually are), I would have a split second to make off with a gift box full of blessed items.

And now the waiting game begins... 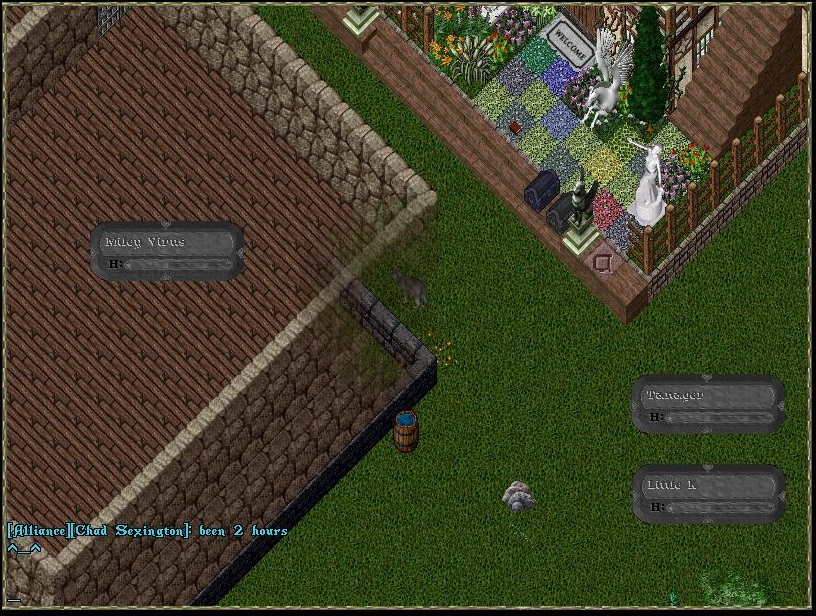 I go to sleep and when I wake, my worst fears come true: 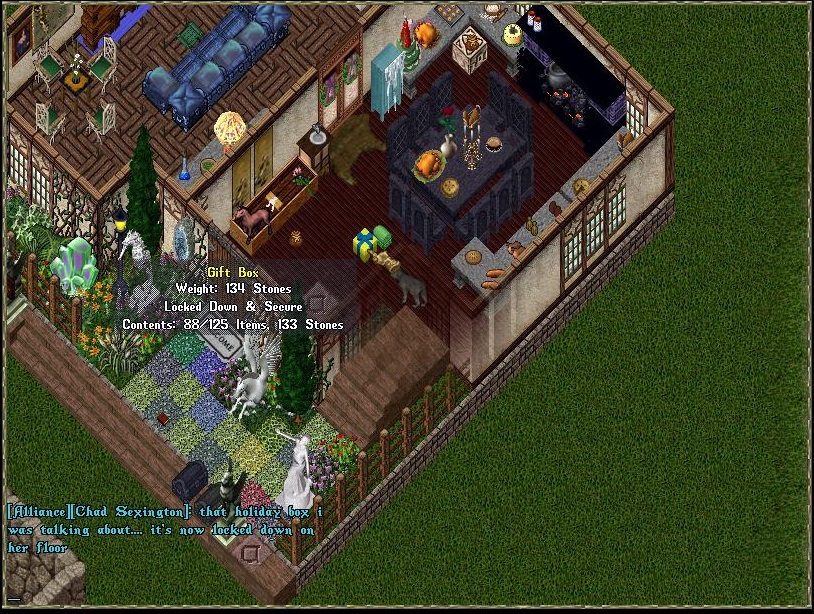 I had my chance.

And I blew it.

It was on the floor, right there, and it was completely secure.

Oh, well. It was my own fault.

(And if not this day, then maybe the next.)