When last we left our intrepid treasure hunter, Henry Swift (that's me!) had been unceremoniously dispatched in the bowels of Dungeon Despise by Calaman Baare. 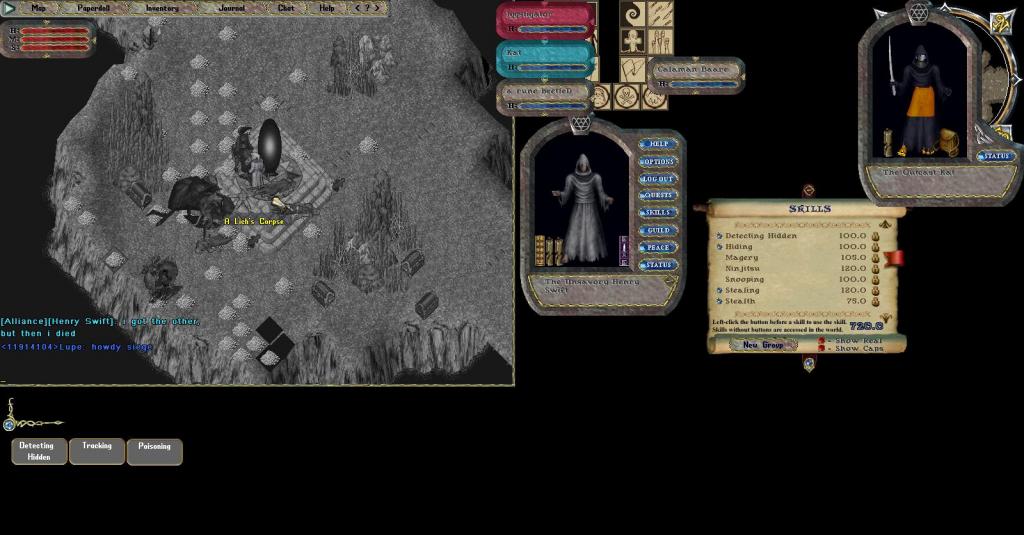 While the murderous do-gooders were busy earthquaking Chad Sexington in the Star Room, I hopped the gate back to Luna to quickly re-equip before making my way back to scoop up any leftovers.

My intention was to move quickly, but that was before I caught sight of the Bo hovering over the southern side of the bank as if he owned the place. 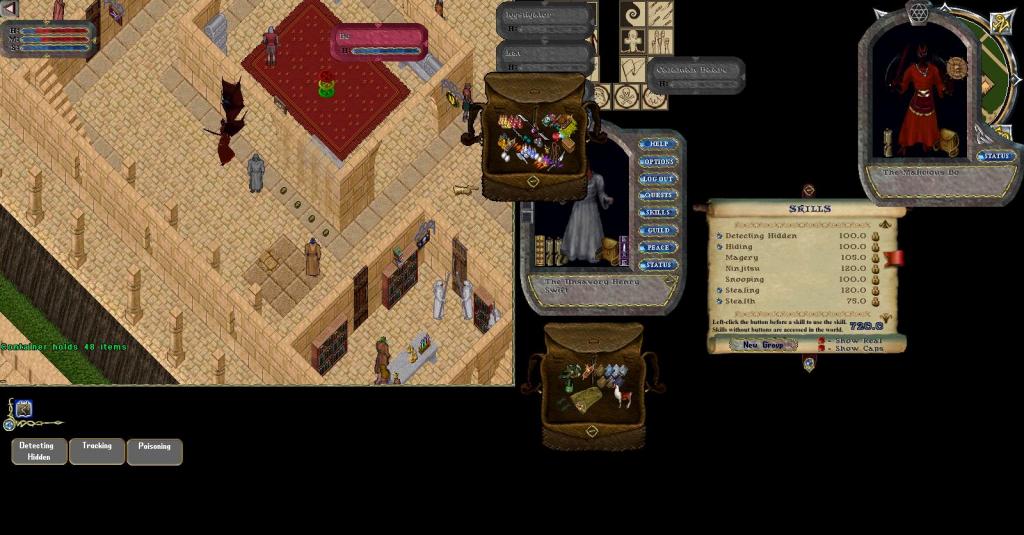 He quickly moved north (was it something I said?), but not before I got a chance to inspect his luggage. 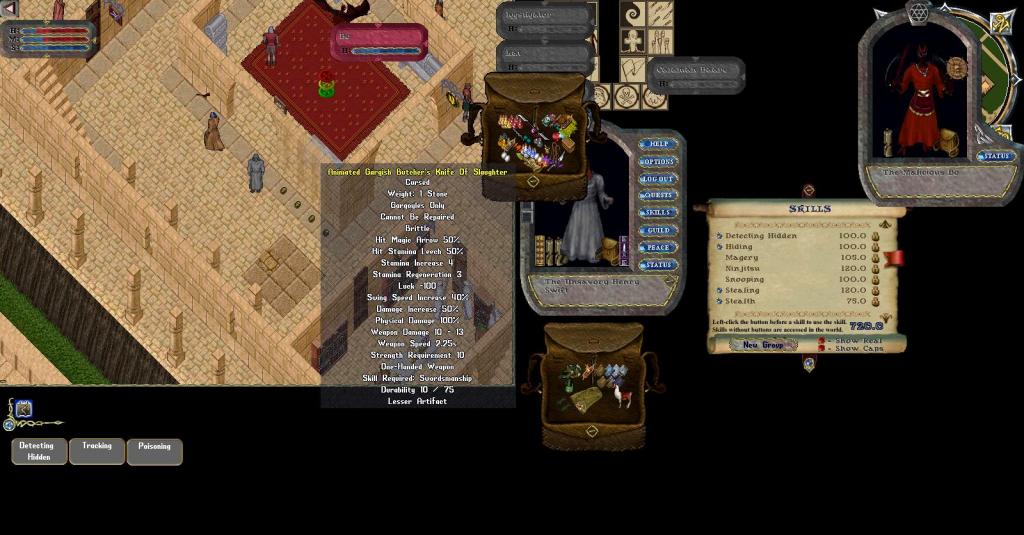 As Bo is a known murderer (and a smelly gargoyle to boot), I cannot leave this sort of weapon in his possession! I must remove it for his own safety, and for the good of the land. 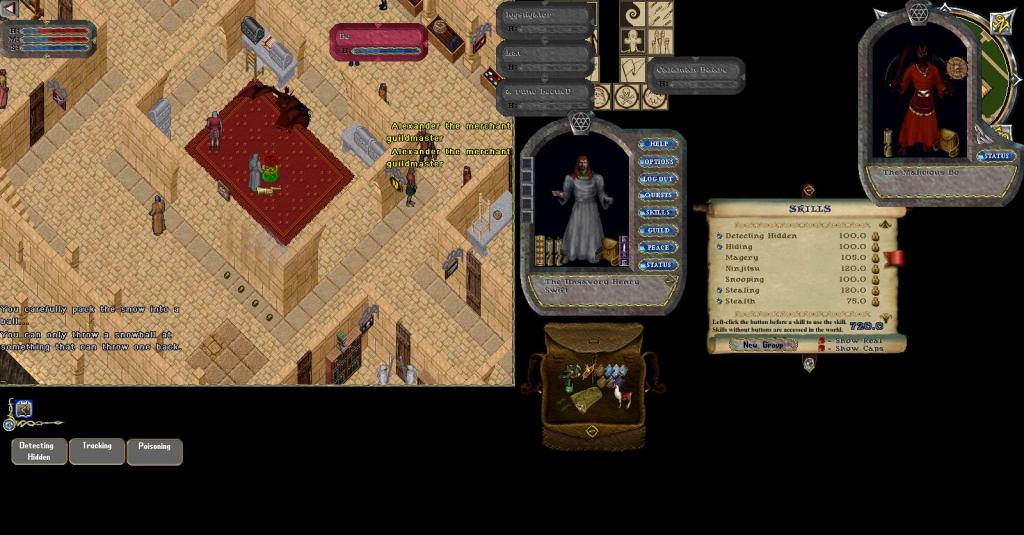 It's a moral imperative!


Still mostly dead, wearing nothing but the death robe I'd just gotten as a consolation prize, I boldly stride forward and snatch the instrument of murder out of the smelly gargoyle's sack! 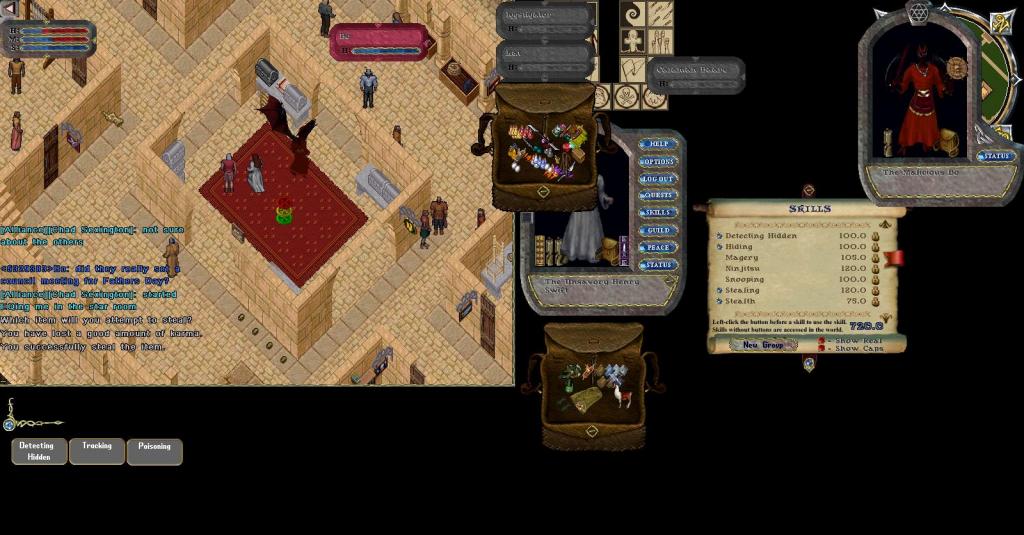 (that sounded better in my head)

With the red gargoyle chastened, and the weapon safely in my possession, the streets are once again safe for all to wander.

Preferably while carrying their most valued possessions! 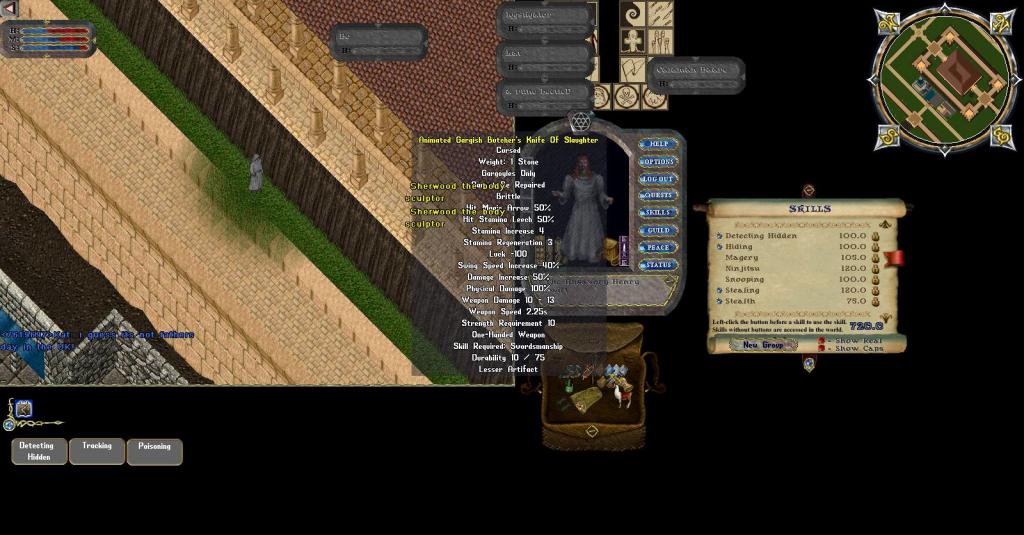 My immediate work here done, I head back to the scene of the previous crime to reclaim my party hat. 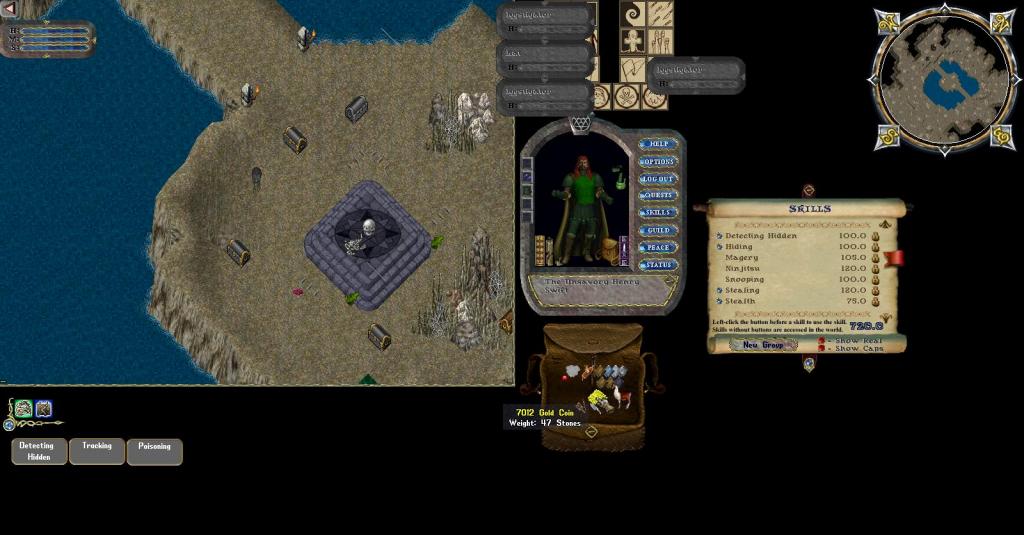 Fortunately, as an intrepid adventurer and seeker of treasure, I long ago discovered the value of a good hat.

I keep several in different hidey-holes across this fine land!

With a new party hat on my head, and a spring in my step (and with the murderous Bo still likely loitering in Luna), I decide to take my investment business elsewhere.

Where I find the Lady Lupe standing uprotected out in the open! 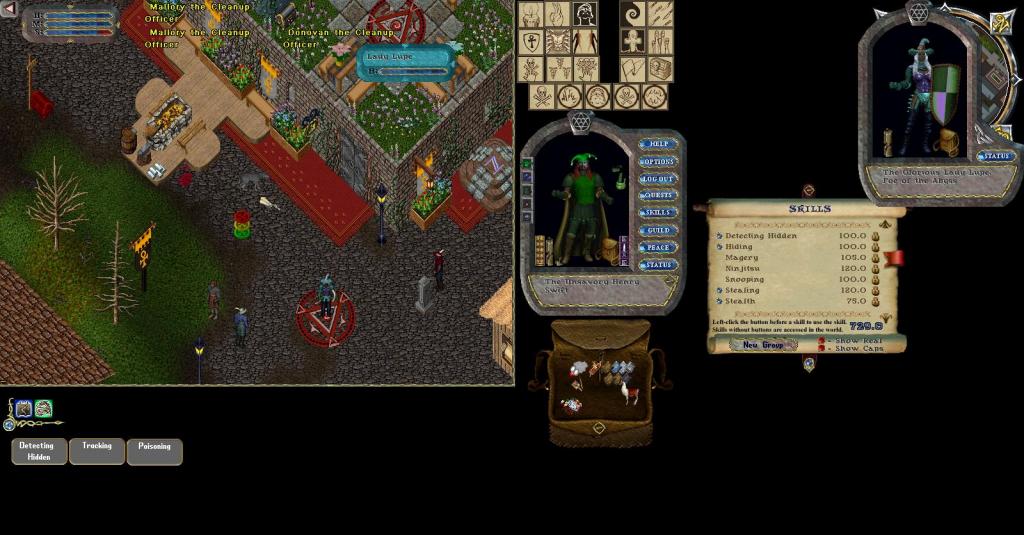 I'd just gotten into my protective stance, the better to guard the lonely Lupe (and her luggage!), when a red gate appeared, 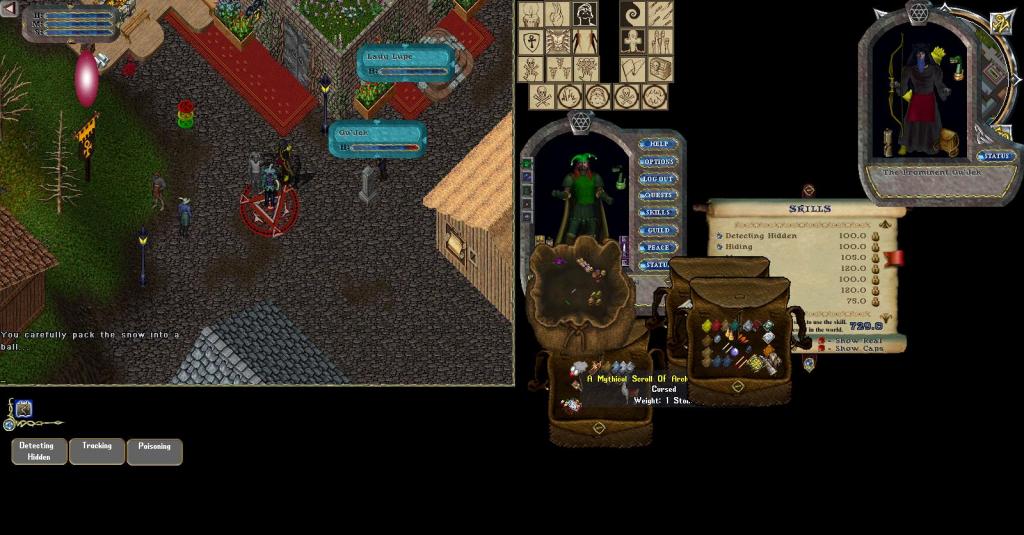 This miscreant had escaped my inspection before, but now here he was.

I mount my trusty llama, reach into his luggage, and remove what I fear may be contraband! 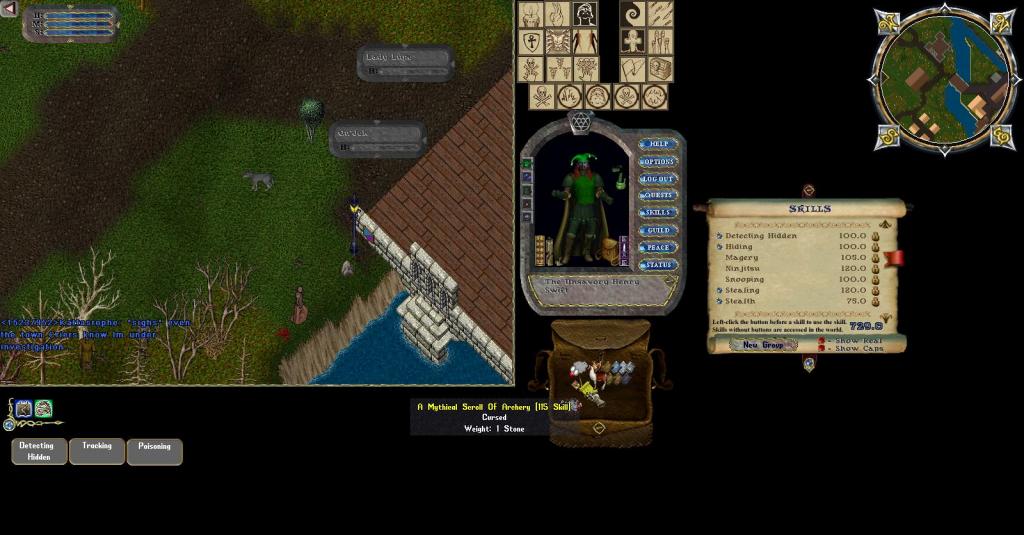 A mythical scroll of archery!

This more than makes up for the paltry Throwing scroll that slipped from my cold dead hands earlier in the night.

Still uncomfortable with the thought of Lupe all alone at the bank, I head back to check on her,

and find her gushing about my presence to the impressionable young Kattastrophe! 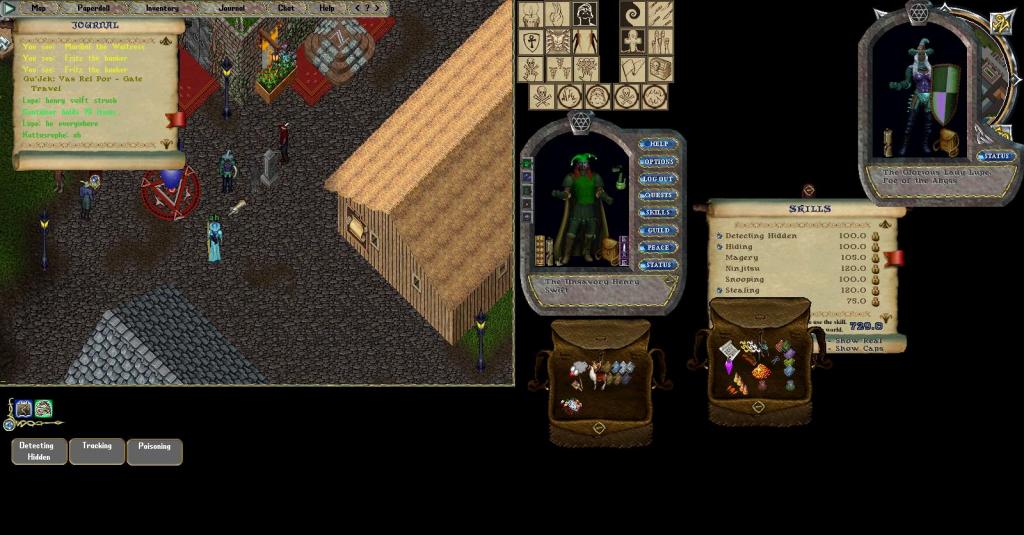 Something I'd barely had time to notice before.

A very nice ring that Lupe has not taken care to secure!

The time for subtlety has returned, so I quickly take the form of a ferret and stand directly northwest of Lupe's gate.

I'll have to be sure.

I'll have to be swift!

And just as Lupe steps toward her gate, I remove the jewel for safekeeping. 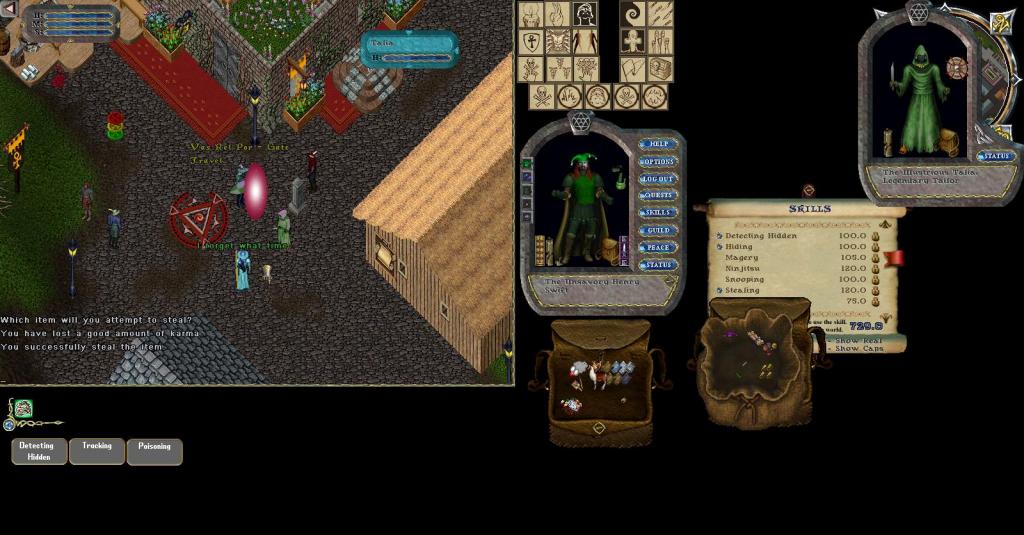 As Kattastrophe chats hopefully, and Talia steps uncertainly toward Lupe's gate, I appraise the gem that I'd saved from Lupe's recklessness. 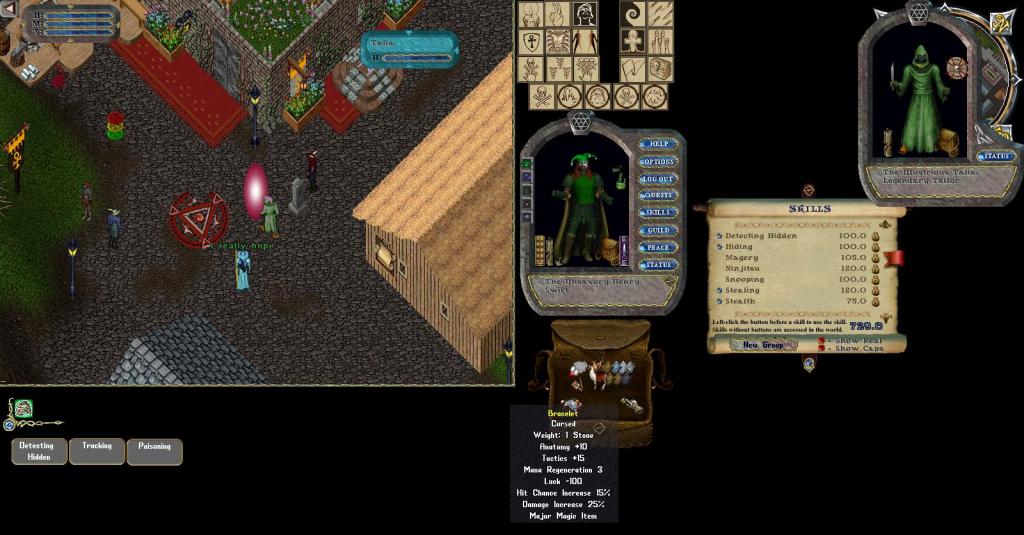 Not bad at all! And certainly too valuable to be left in the care of the careless.

A Lesser Artifact Gargish weapon, a 115 Archery scroll, and a very nice bauble.

All valuable items that would surely be cared for properly at the Barter Town Black Market.

But the most valuable thing I've gained today is the satisfaction of having done so much good for so many in so little time.