This story begins 18 days prior to my public lynching on Stratics. And it begins with me in the middle of nowhere, doing something (and up to no good), when Sara Dale begins whispering sweet nothings in my ear.

With a simple gate home and an even simpler crystal portal after that, I would easily make the randevú. 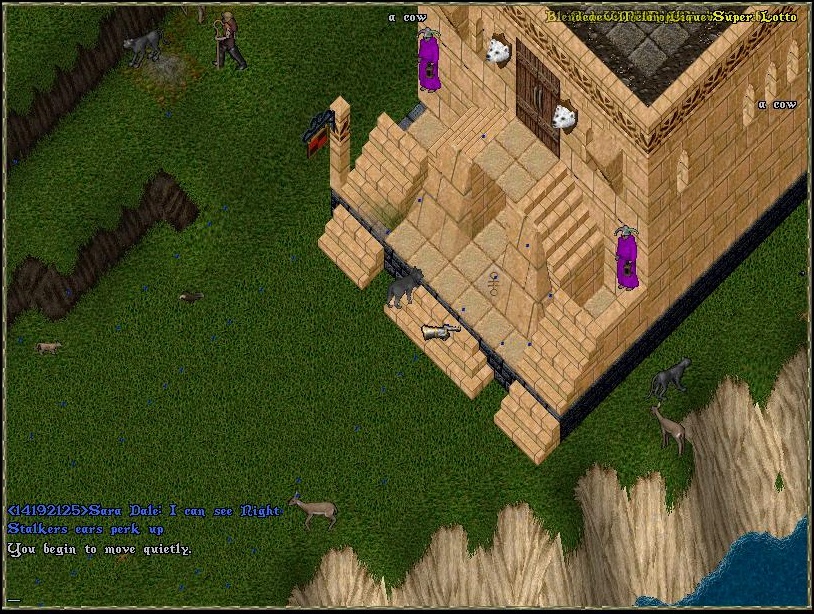 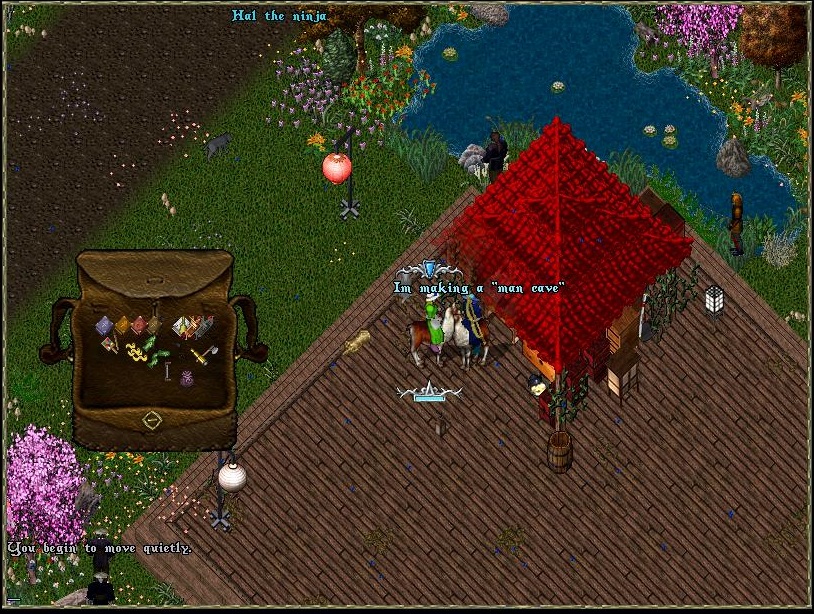 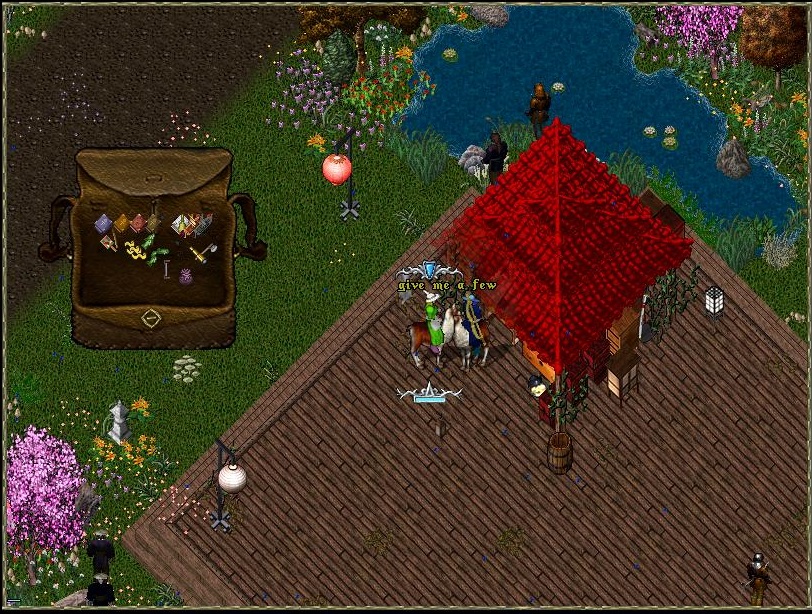 Sara Dale and Kattastrophe were sealing a deal as Nightstalker makes the first move. 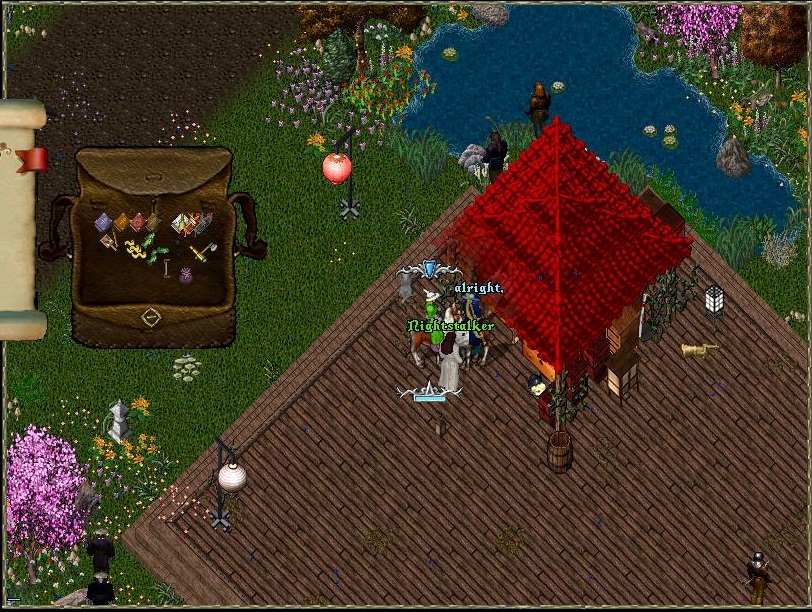 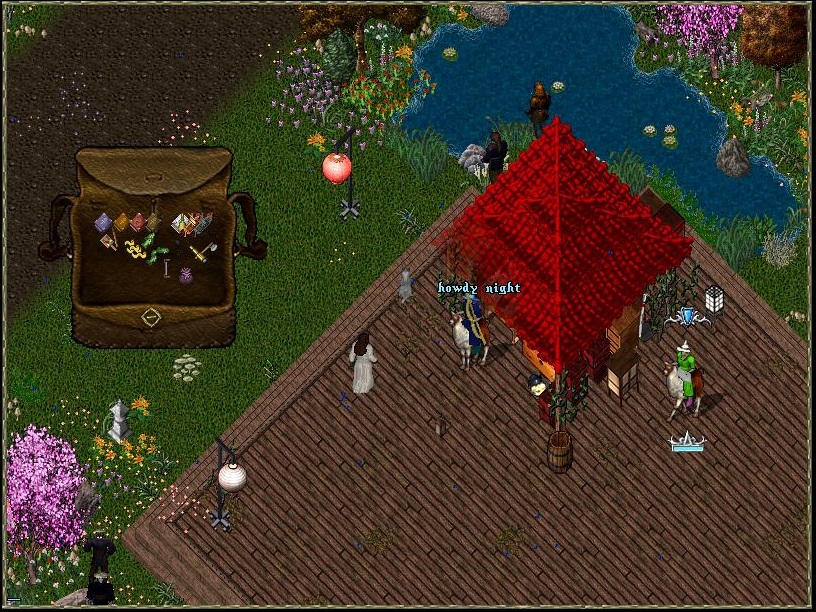 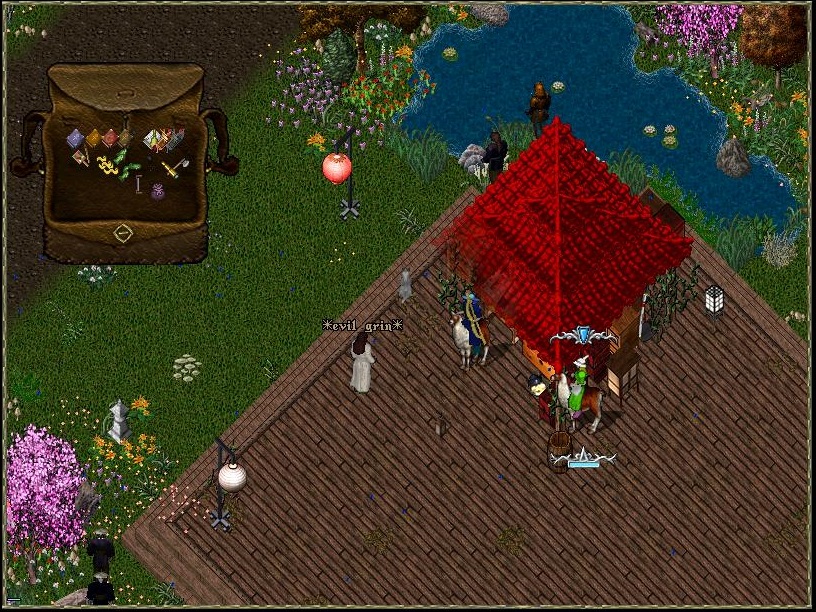 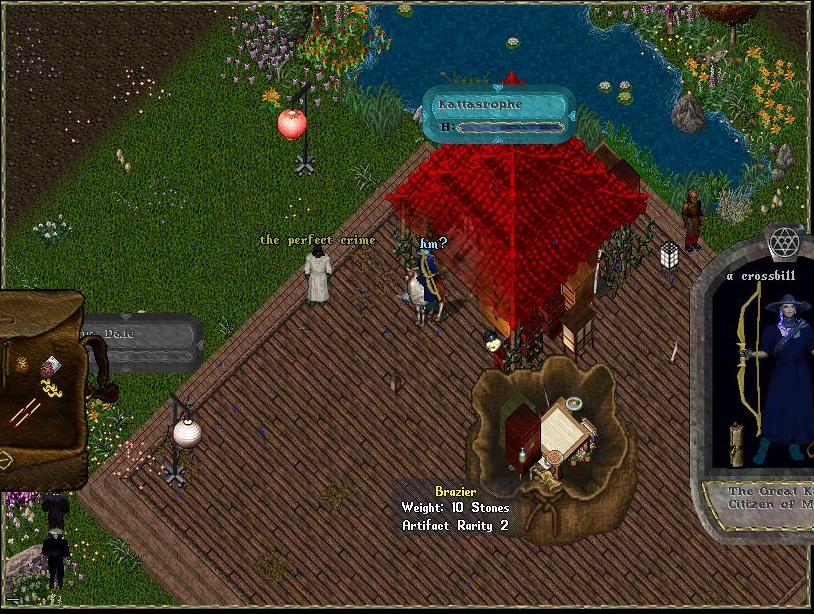 With nothing but deco, I'm content to watch & wait as Nightstalker goes in for seconds and thirds. With the speed of a butterfly and the agility of a bee, he gets away with the perfect crime in broad daylight. There was literally zero chance of him flagging grey on 1 stone items no matter how many times he tempted fate with his incredible luc--

Kattastrophe loots back her deco and I loot the rest as Nighstalker comes up with a Plan B.

(In hindsight, it's a little embarrassing that between the two of us, neither one of us knew how criminal flags & guard whacking worked when it came to beneficial spells. But there was no harm in trying.)

Nightstalker's grey ghost shows, Kattastrophe casts a resurrection spell on him, and Plan B fails almost as hard as Plan A.

Kattastrophe casts the spell, I call guards, and nothing happens.

Nightstalker leaves her some parting words (in regards to a murder of a thief) just as Henry Swift whispers even more sweet nothings in our direction through the ether.

Henry Swift: IDOC if anyone is interested
Nightstalker: oh?
Chad Sexington: what stage is it?
Henry Swift: across the road from Katt's house
Heny Swift: i already made a couple trips, but there is so much

While we were busy farting around with Sara Dale & Kattastrophe, an IDOC had fallen and it was being looted as this very moment! 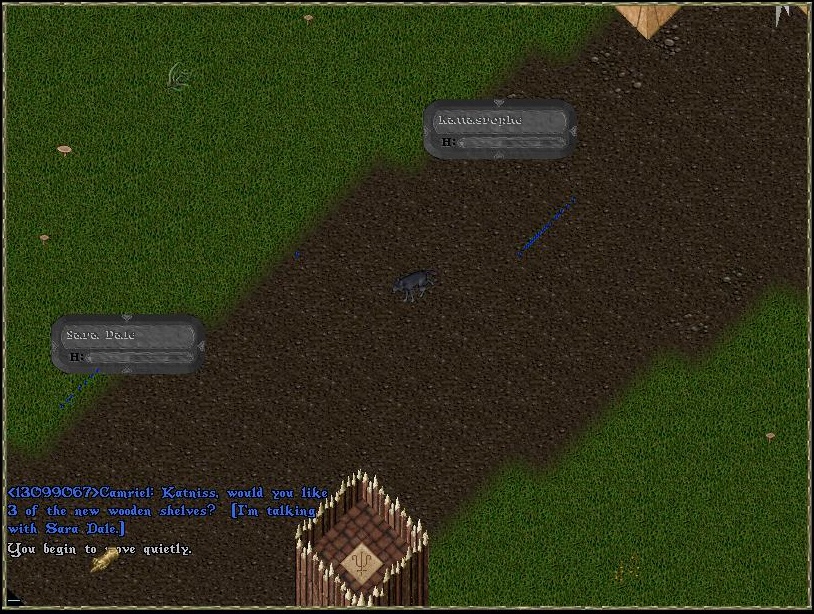 Henry already had the first pick of the best loot, but I was determined to beat Nightstalker for seconds. I knew exactly where the house was (having spotted people inside as I lurked outside in the past), but I didn't have a rune. 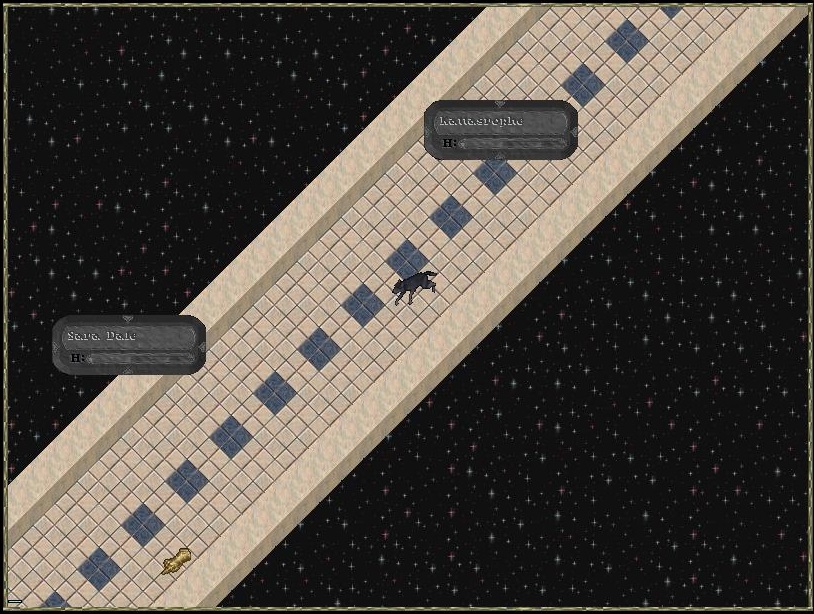 Little reason to be subtle about it (and no time to stealth my way there).

It was a race and I run at full speed, out in the open, hoping no one spots me as I run past dozens of houses on the way.

(And the truth was that not only was I racing Nightstalker, but I was also racing Kattastrophe on her way back home. The IDOC was next door to her house after all. And once she showed up, who knew how many others of NBT would be on the way.)

I arrive at my destination without another soul in sight. 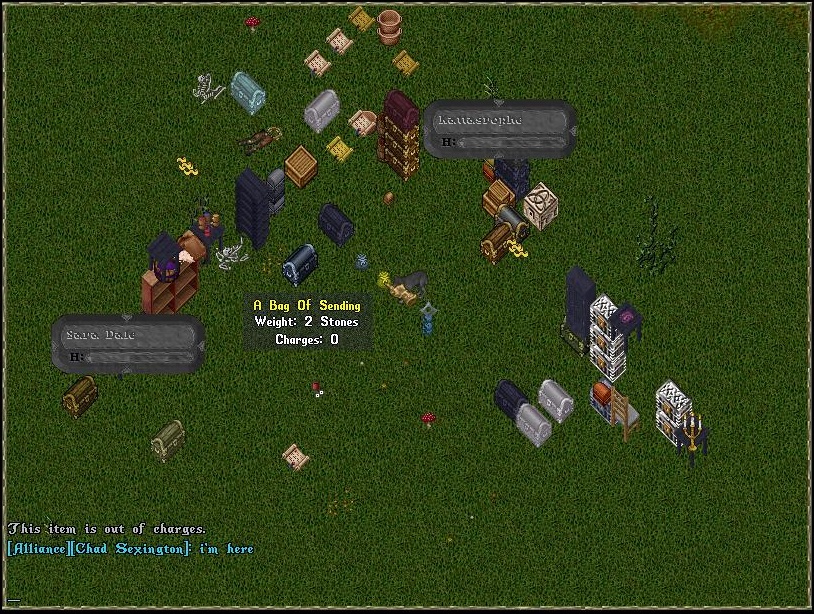 From the looks of things, Henry had already picked out the best of the bunch.

Although, I did manage to find a pair of Holiday Gift Tickets sitting next to a stack of blank Commodity Deeds.

(More on this later.) 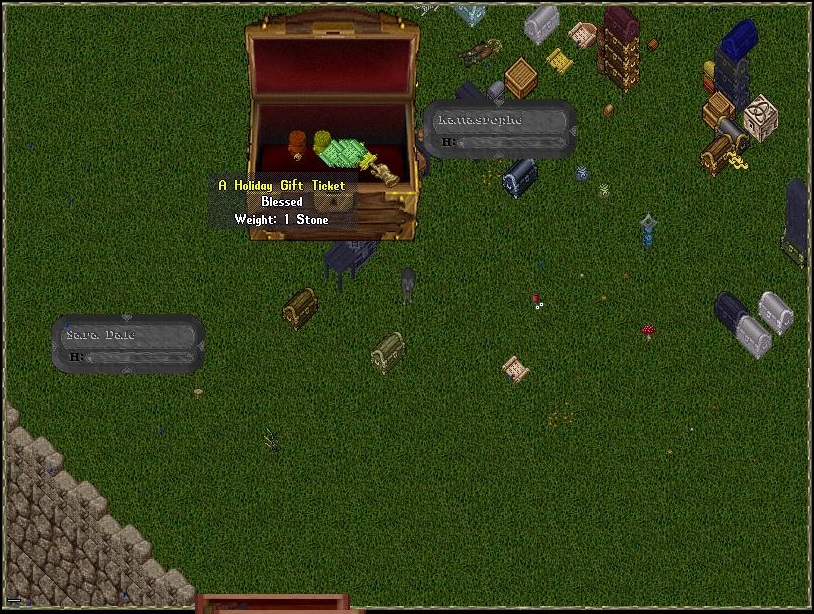 Nightstalker shows up 30 seconds later and we continue to filter through Henry's leavings.

I'm able to make at least 4 of 5 trips home & back, before Katniss notices a trio of thieves in her backyard. 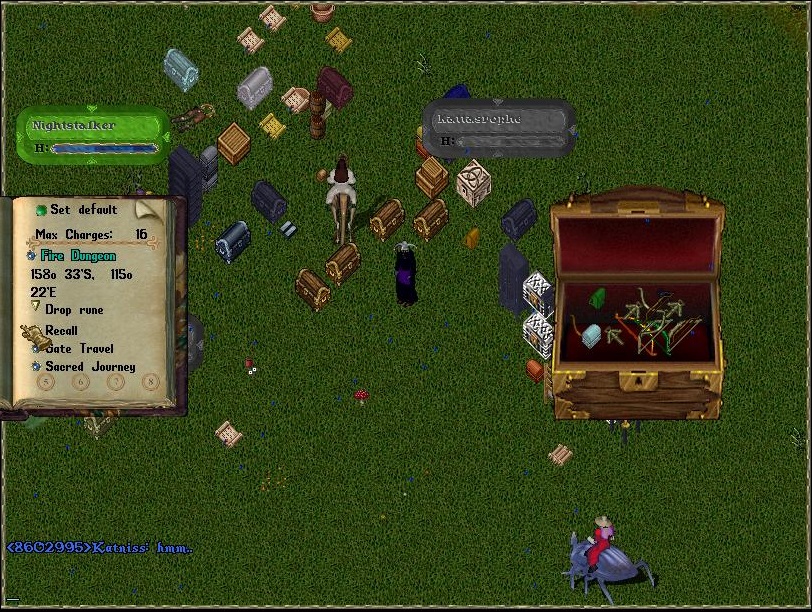 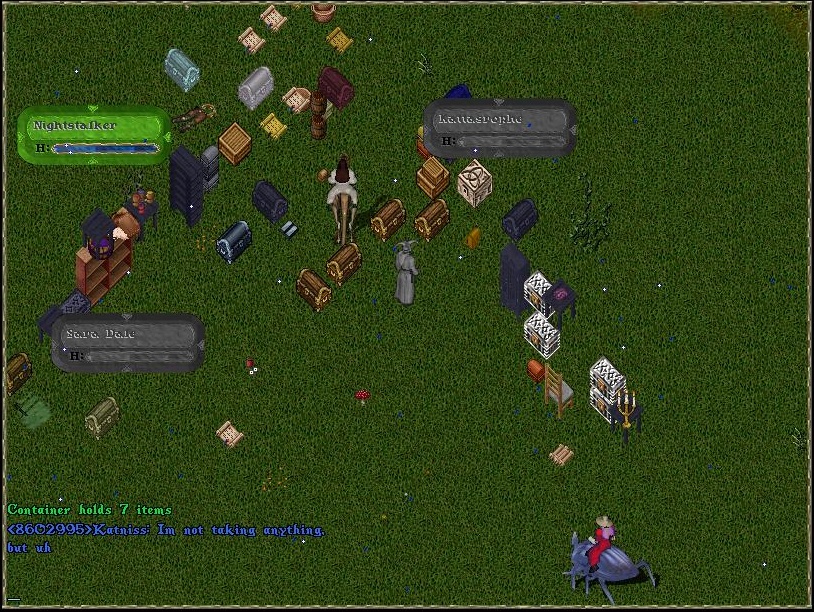 It looked like the secret was out, but things still remained relatively civil as none of us were cold-blooded murderers.

(This included Nightstalker at this point as he shed his final murder count a few days before.) 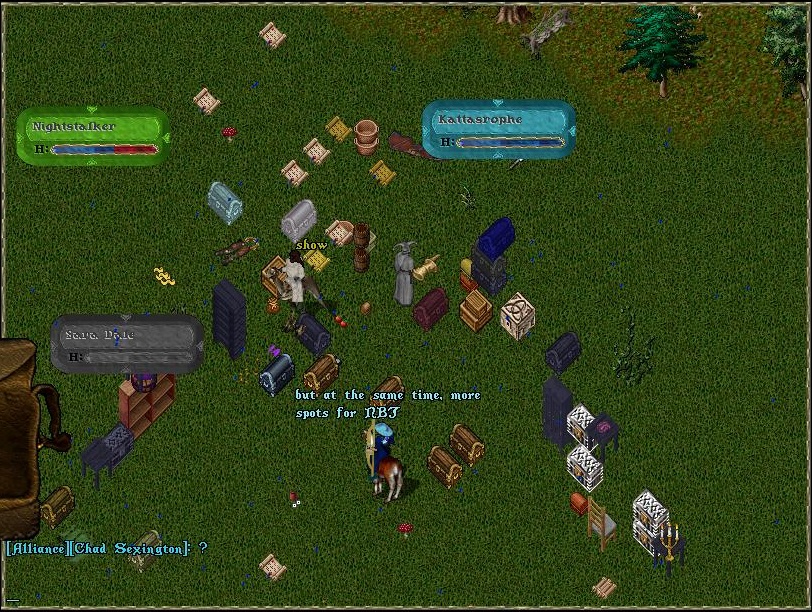 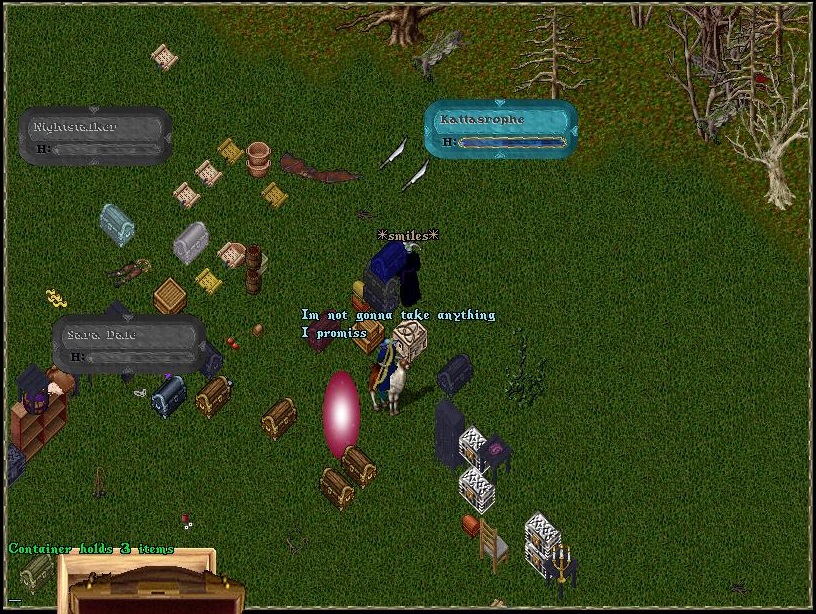 (That's what they all say.) 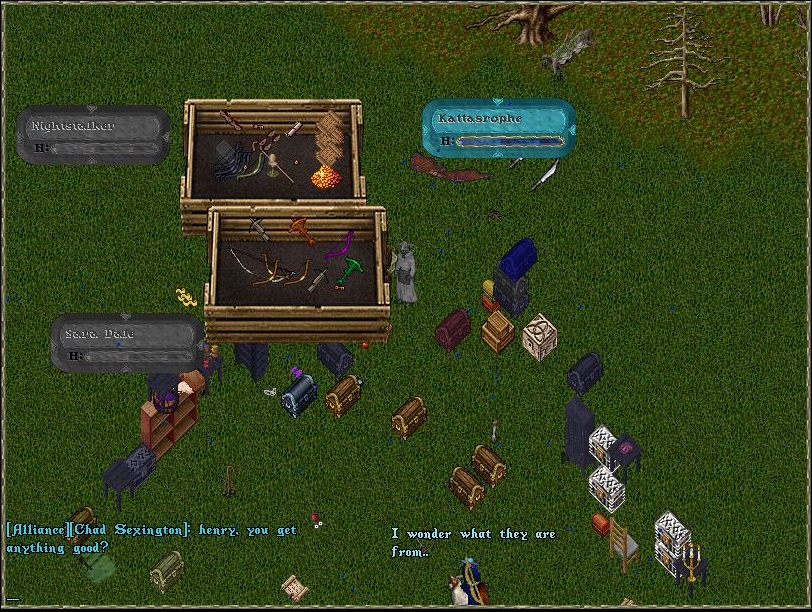 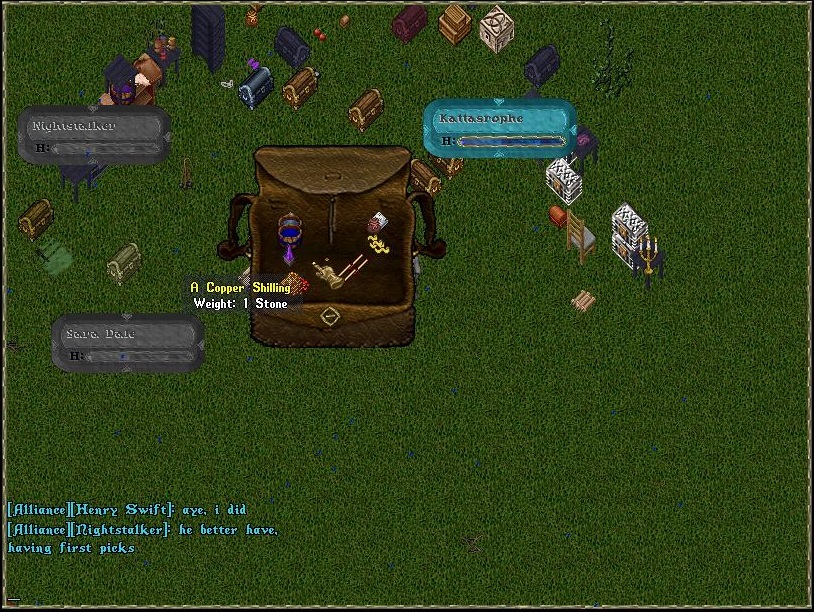 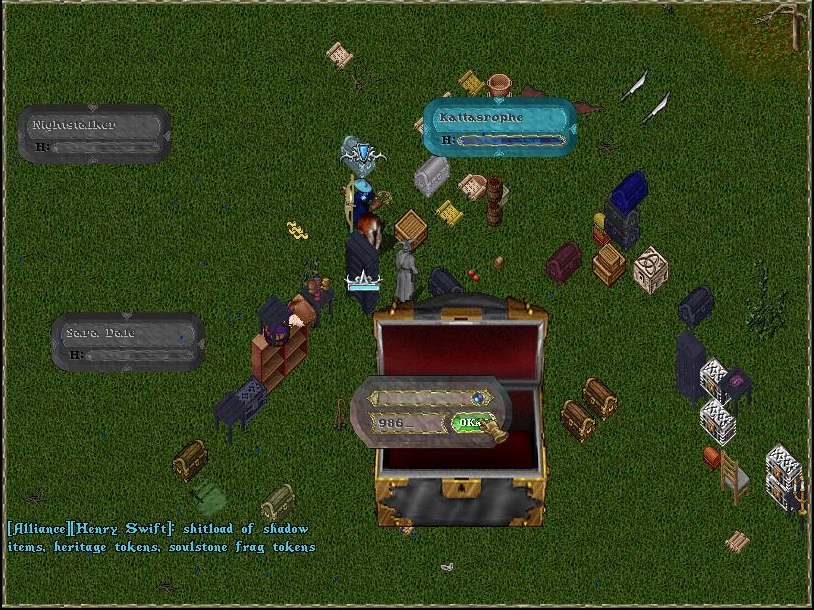 Regardless, Henry made out like a bandit, Nightstalker found a Shroud of the Condemned and dozens of Juka King bows, and I made out with a pair of Holiday Gift Tickets and a chest full of FC1 jewelry (to add to my growing collection of which I continue to horde like a mad man).

The only thing of worth that was left were stacks of thousands of resources which were much too heavy to carry out by hand. 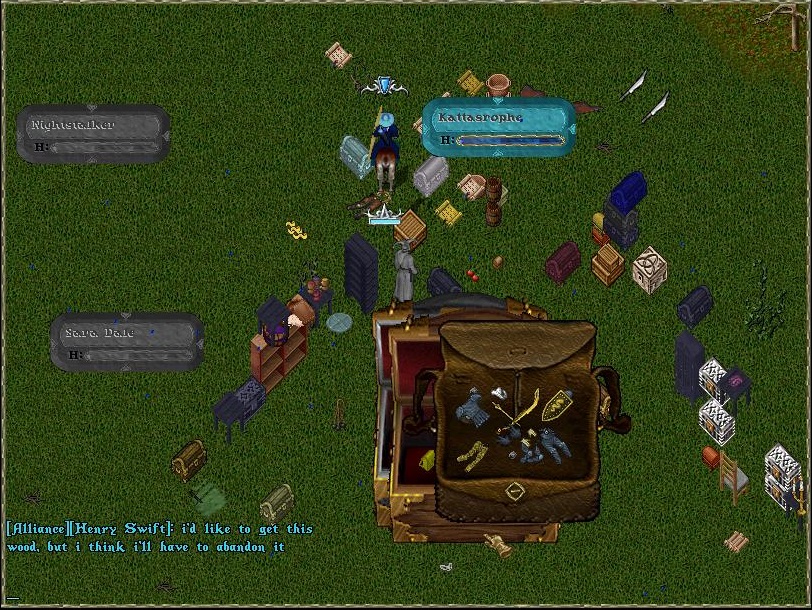 It looked like all hope was lost for the wayward resources. Such a waste.

And then Nightstalker has an idea.

Henry makes contact, she agrees, and they both head off to Katt's house across the road as Nightstalker and I continue to loot. Remembering the chest full of blank Commodity Deeds, I swing by the front of her house, drop off the box, turn my heels, and continue looting the rest of th--

*You have been made a friend of this house.*

Oh, Katt... I've stolen from you repeatedly in the past and I just attempted to guard whack and loot you less than an hour ago. I hope you don't think I needed access to the Commodity Deed Box, because only Henry was after the resources. I hope you know that the only reason I swung by the front of your house was to drop off the blank Commodity Deeds I found. And for the love of all that is evil & cruel, I hope you remove me from the friends list of your house after this IDOC business is over. Because if you don't, there isn't a power in the verse that will stop me from doing what must be done.

(This isn't going to end well.)

The only other person to show is Amelia, but she's much too late. 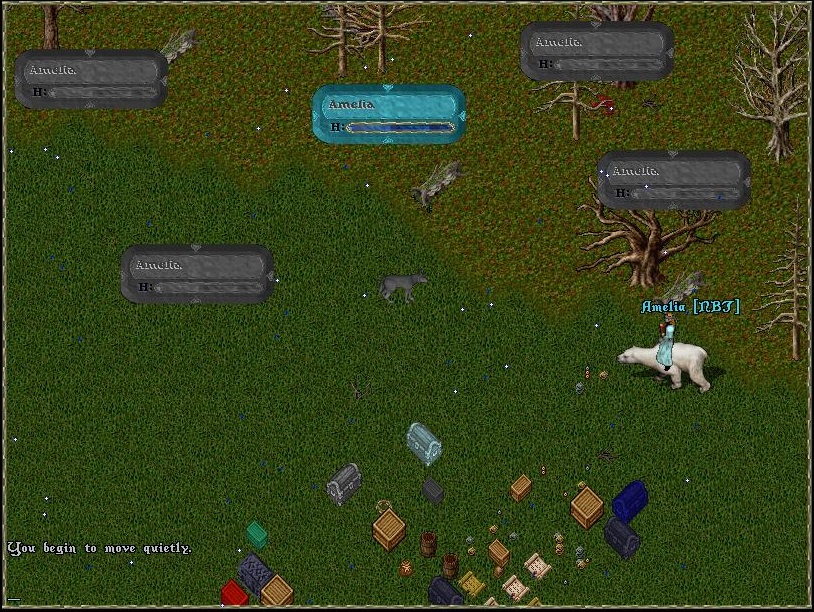 (She'll only receive sloppy 5ths at this point.)

People begin leaving one-by-one as it becomes clear that nothing of value is left and eventually it's just me and nothing but silence. And I'm so curious. I head across the road to the front steps of Kattastrophe's house. I take a step forward. And then another and another.

I didn't have to go far before-- 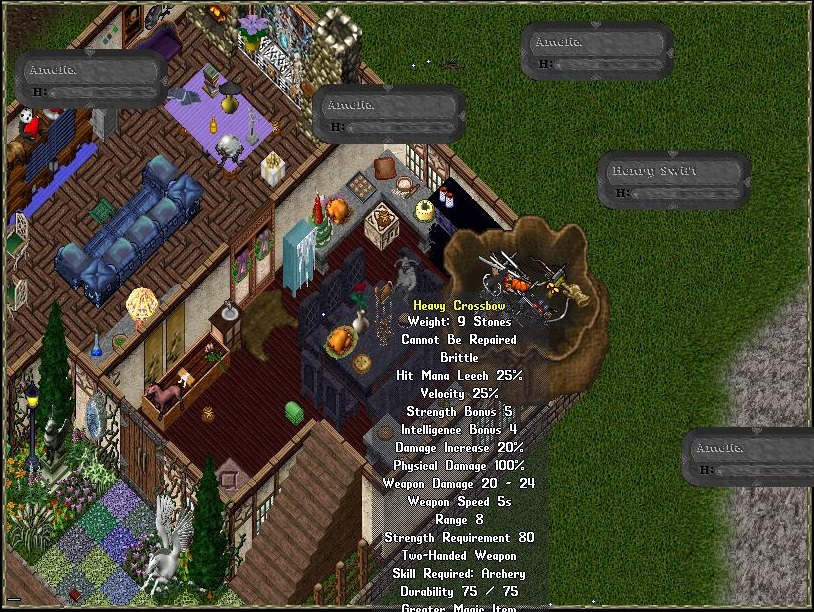 It's filled with 30 Shame artifacts and I take it all. And that may sound like a lot, but after sifting through the contents it becomes abundantly clear that these are bottom-of-the-barrel type artifacts with no other use except for unraveling for scrap. (In fact, I wouldn't be surprised if this pouch was dedicated as a dumping ground for crappy artifacts for exactly that.)

Honestly, the items were so bad that I doubt anyone would even notice.

I methodically go through the rest of the house...

...but I find nothing except a funny looking mirror which looks vaguely familiar. 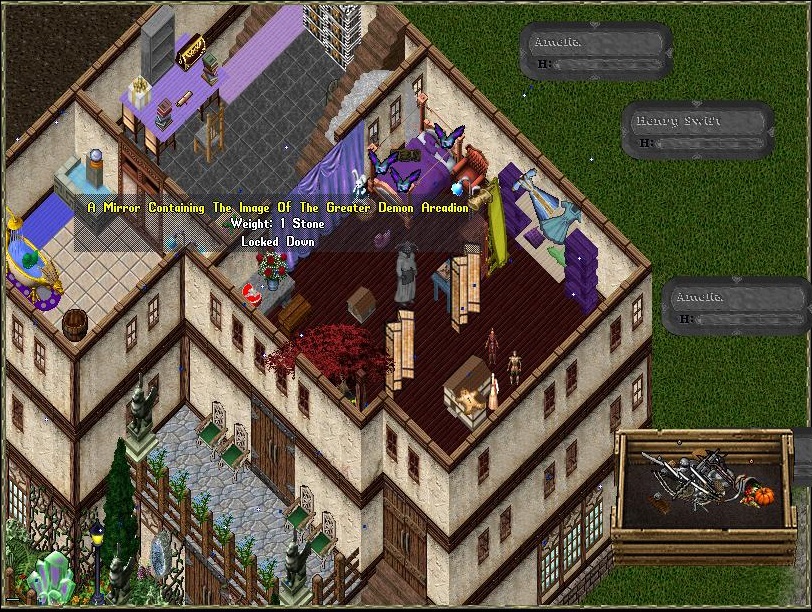 With nothing left for me here, I mark a rune nearby, and add Kattastrophe's house to my long list of destinations to hit during my daily rounds.

I head home just in time for Henry to show off a dozen Soulstone Fragments, a dozen more Shadow Tokens, a Heritage Token, and a pair of Personal Attendant Tokens! 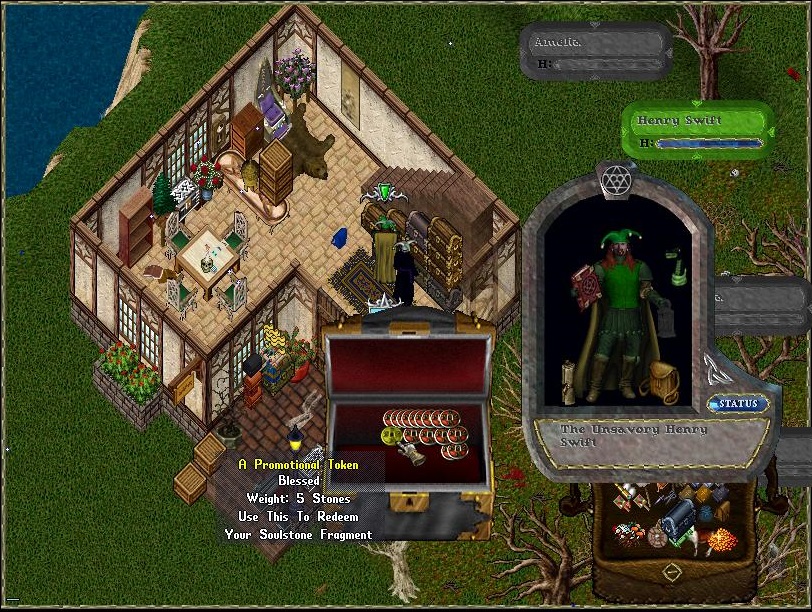 I figure that now is as good a time as any to learn the consequences of my latest dispicable act (in a long line of dispicable acts!).

So I pop one of the Personal Attendant Tokens and ask Pila the Fortune Teller the only question worth asking: 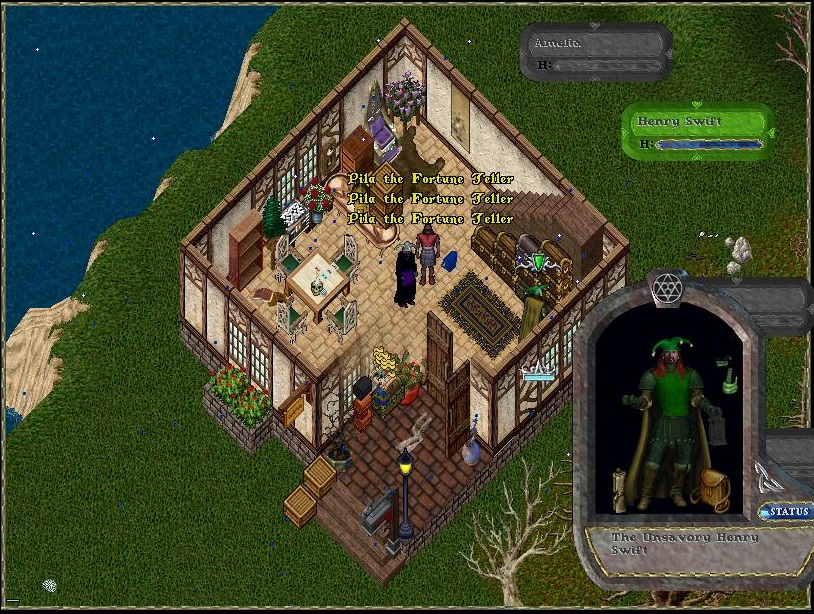 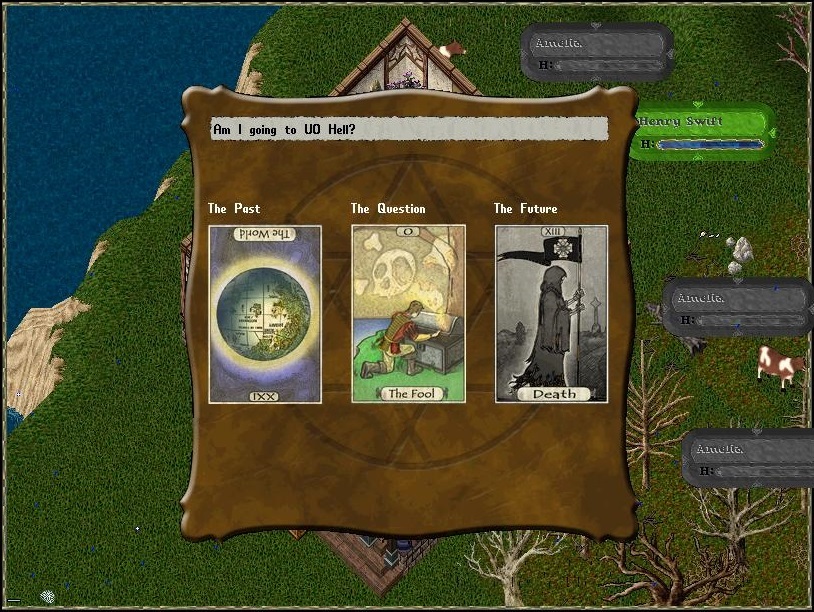