I don't always go thieving. But when I do, I prefer Baracoon.

These days, it is hard to beat the Despise spawn for some quick pickpocketing. SoTs drop at a decent rate, and you can make a quick million gold with 10 seconds out of your time. You never know what sort of characters you'll run into down there, and that is always a plus. These past couple nights have been no exception.

I made my first incursion since a previous harrower spawn, just to see what was up. I had just missed the champ, it seemed, and the gate to the star room was still open. Ah hah, a red AND an oOJ (enemy factioner). This would have been fun, if they had been more focused on killing me instead of each other. Ah well. What does the OJ have in his pack? 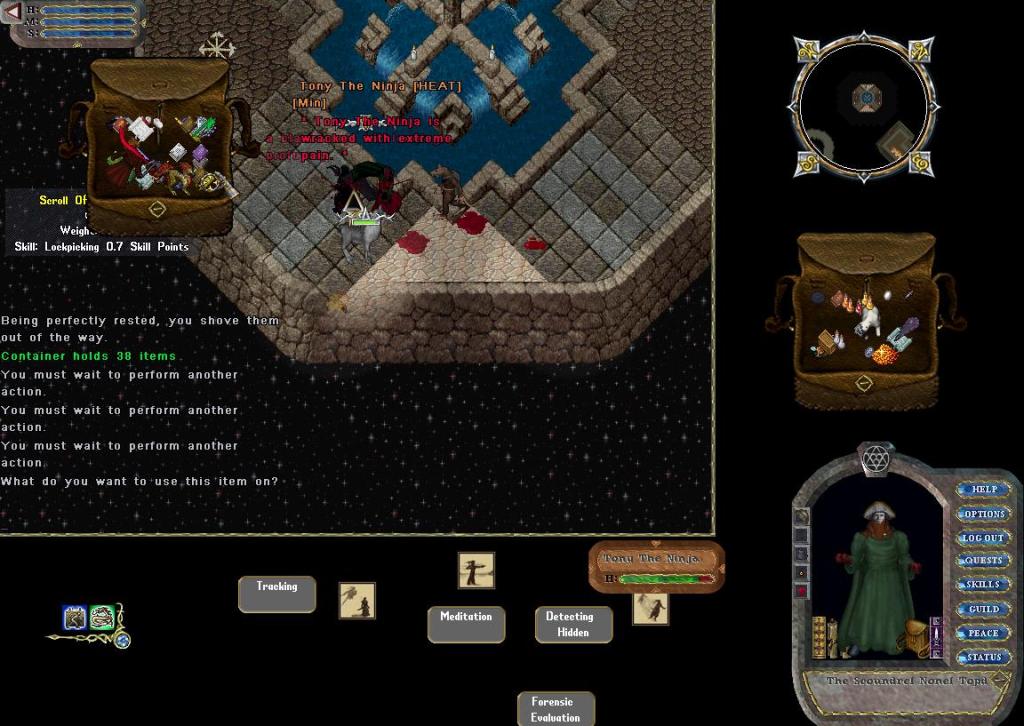 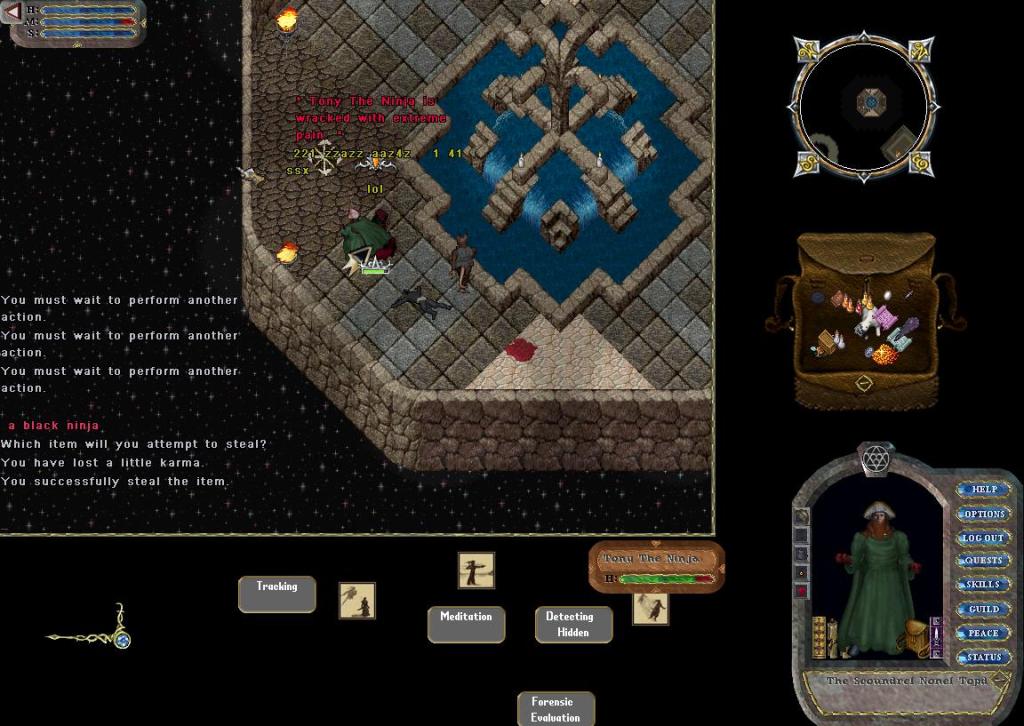 Well, at least the red is dead and the OJ has turned on me. Eh, dexxers. Might as well snoop his pack while he rolls his RNG. Silver!? How did I miss that before!? Silver is like my own personal ferret crack. And a hefty pile, too! 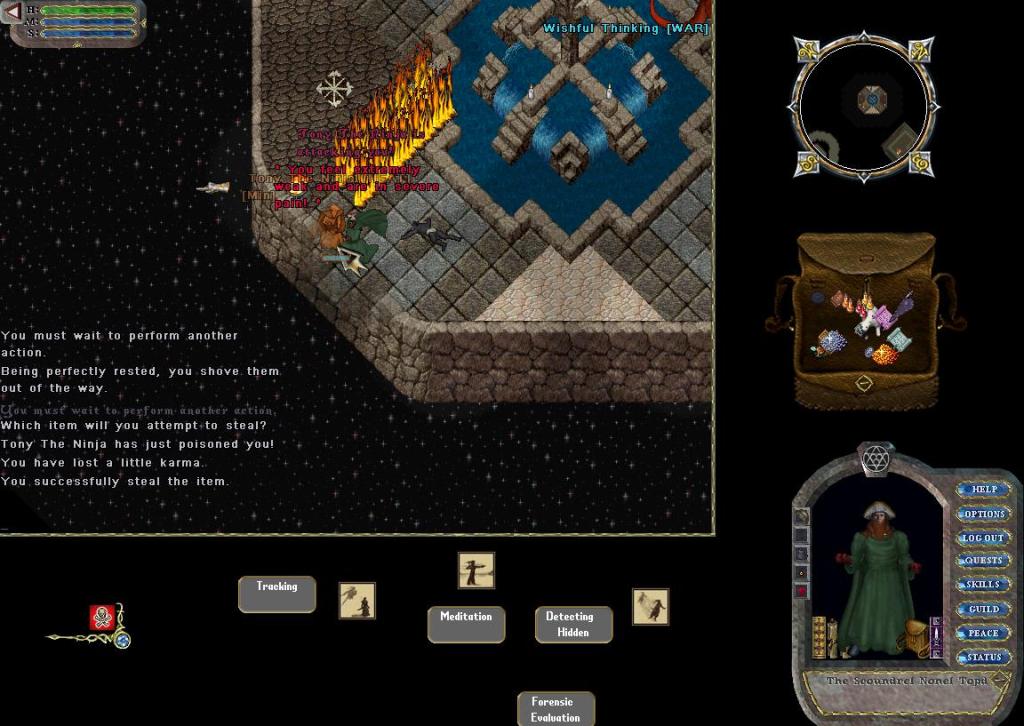 I quickly grow bored with this ninja dexxer, and head off to bank. Now to see if anyone has rebooted the Coon spawn. Yep! 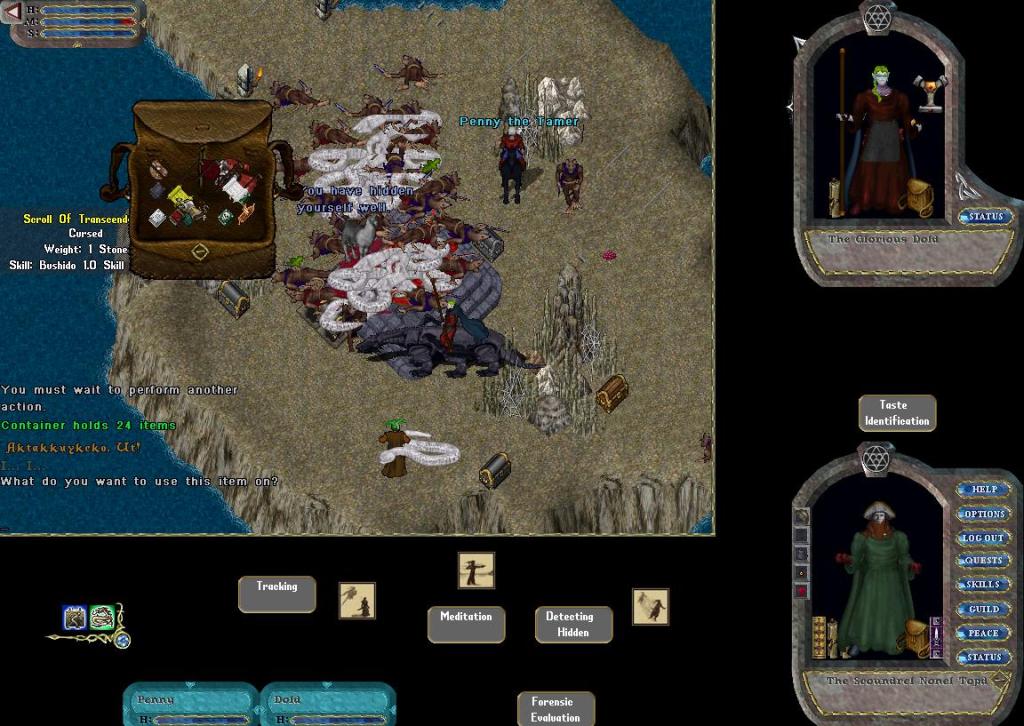 A 1.0 bushido? I don't intend on training no bushwhacker, but hell, I make it mine. Some horse tamer with the guy tries to attack me! The nerve! Time to snoop them and...

...ah hah, a 1.0 mace fighting. The symmetry of making that steal with the bush scroll now in my pack is too much to pass up. 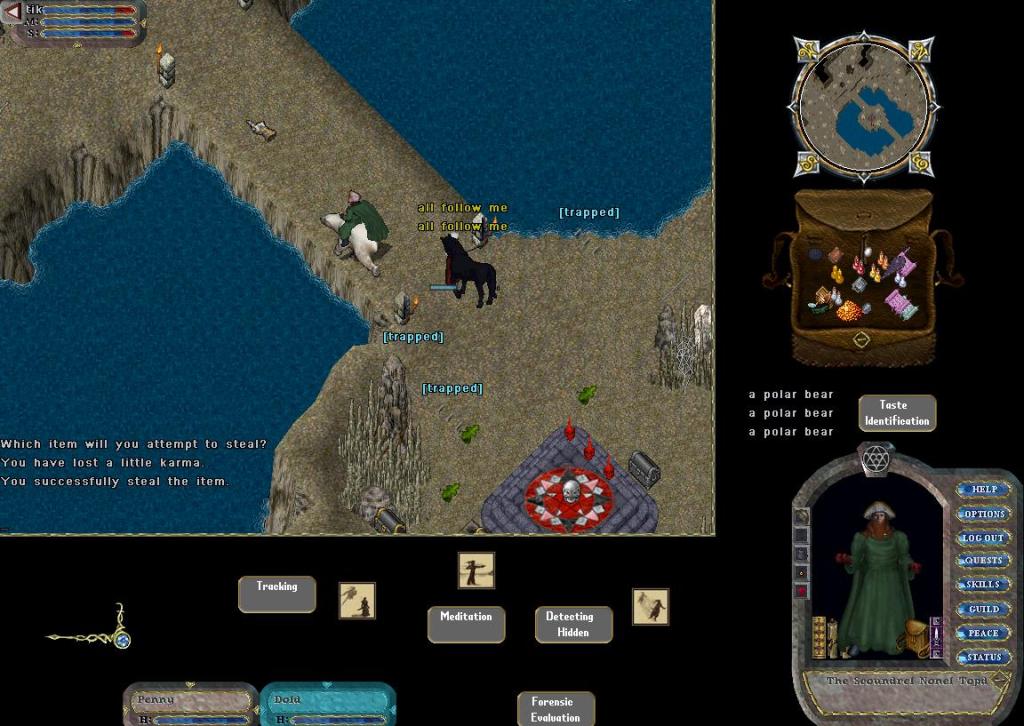 My I hate those new horses. What is it with the gods of this game, always adding more and more powerful nonsense? Oh well. All their overpowered nonsense cant stop a pickpocket (you know, a real thief)! I toy with them a bit more, than sit back and watch them fight the champ. They are aware of me, and Dold is familiar with my name apparently. Knowing they aren't about to stand around after the scrolls drop, I sneak up and open their packs. There I sit, ready to get on last target the first random white scroll I see. Success! He runs to the star room and right to the moongate...I chase... its a close one, a photo finish! 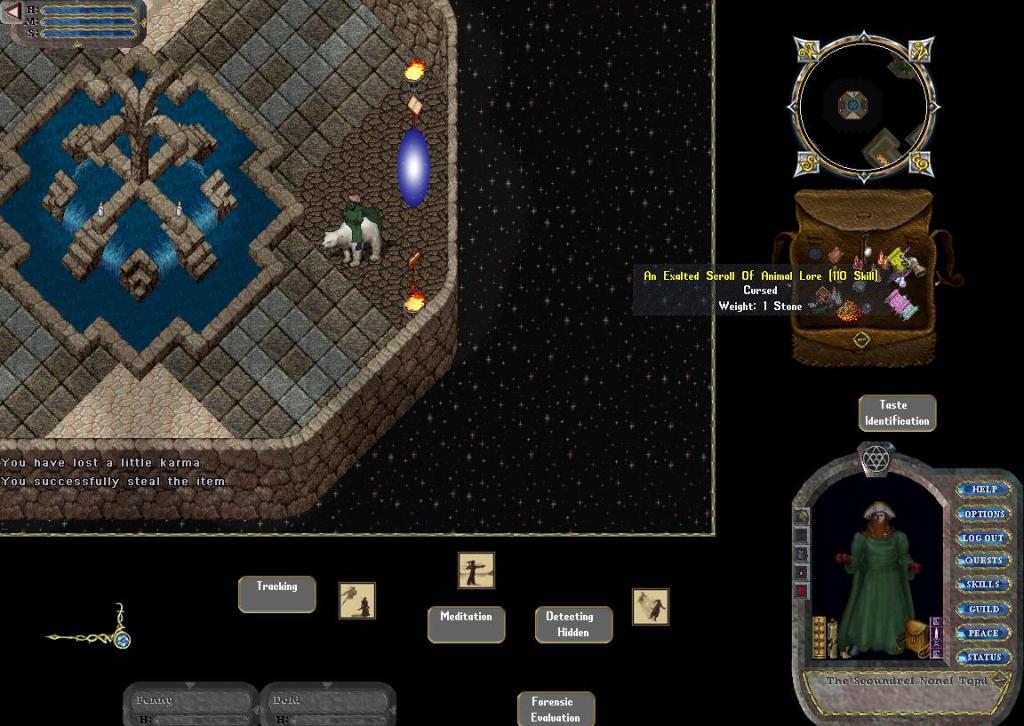 Got it! Its...its...a 110. Damn! Oh, here comes that horse tamer Penny. Random scroll theft right before they disappear in the gate, like the previous. Surely the odds are in my favor, now!

Haha! ...wait, d'oh! Another 110. But at least it is a stealing, I will probably eat this one. Well that was a bummer. Time to go bank, take a quick break, and then head back. This time of day, people have a tendency to chain spawns, after all.

When you're right, you're right. I two start up another spawn. I stalk them about a bit, looking for SoTs as usual. Dold identifies himself to me in general chat as one of the guys that helps Shinobi with his scams. I'd love for the thief code to cover him, but it doesn't. Nevertheless, we are now on cordial terms. 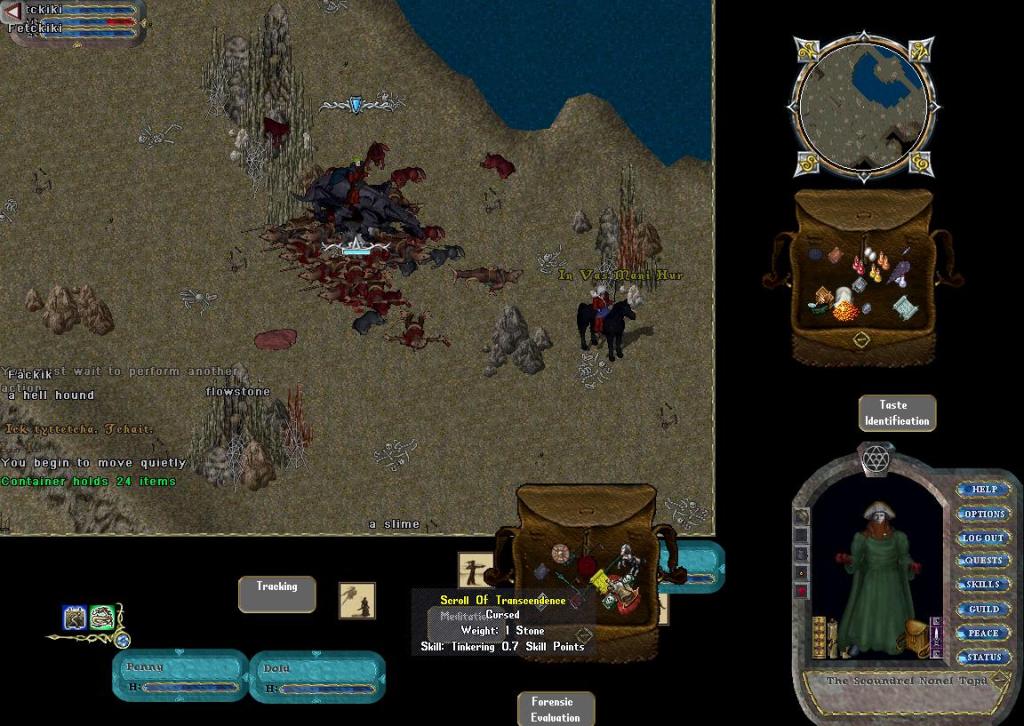 Oh! I am training a tinkerer. I'm relatively new to Atlantic, and I need to get some mules started up after all.

Of course, Dold has been friendly. I can't be so rude as to just take it and run! With a smile, he feels no worse off without the scroll. I have to admit, it isn't as fun stealing when they don't get mad or try to kill you. Time to snoop his partner. A .9 focus? Now, I may steal bandies. Apples. Pots. All matter of useless junk. But even I have standards! I let the focus scroll go.

Red TB from MM soon come and raid. They quickly push the two blues out. I watch for a bit, and in comes CoM! CoM beats everyone out, and works the spawn along with a blue in some sort of ugly stone goliath form. The Star Room is a dangerous place to be, as a faction thief amongst enemy mages, but where would be the fun anywhere else? Might as well make a steal while I'm at it. 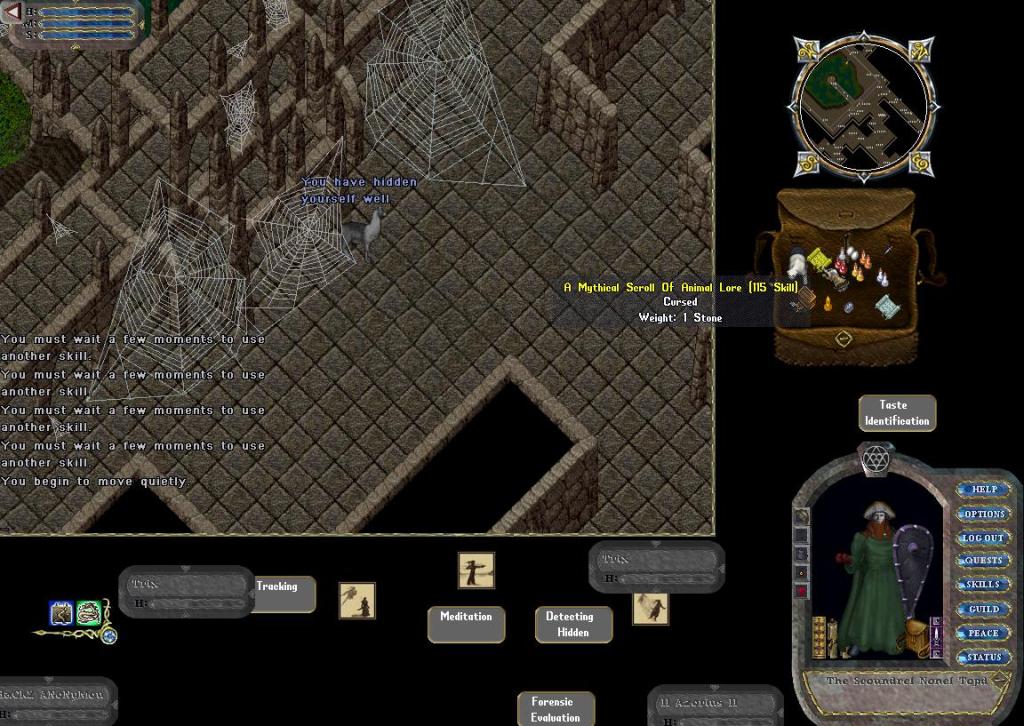 Bah. I haven't been getting a darned bit of luck getting 120's in recent days. A lone SL runs by, with CoM chasing. I decide I'll see what I can steal of the running group. The SL is gone now, and I've revealed. Now I am the hunted! But, alas, a bit of running and a smoke bomb takes care of that. 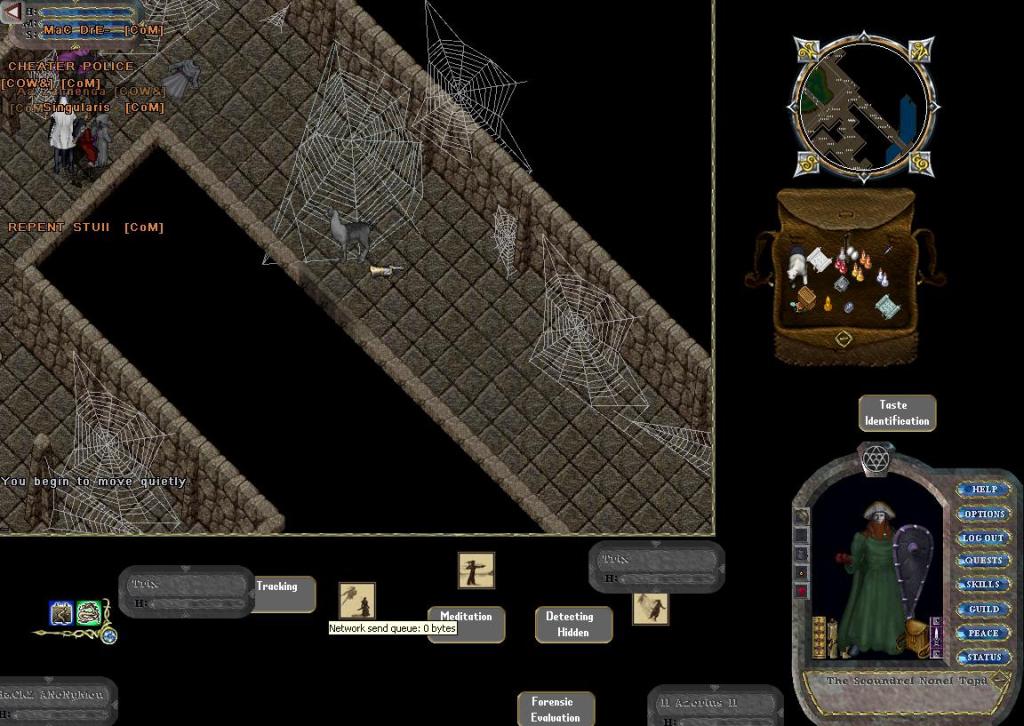 Back to the star room.

Eh, nothing more worth stealing. I'm bored of this, I think I'll go log off for a bit...

Ah hah. Two blues working the spawn. Well it was two blues. One kills the other and goes red. Odd. Hah. So I watch them pull the Coon up. I'm not aiming to be particularly sneaky. After all, I know worse comes to worst, I can still make off with a random scroll like before. Might as well shadow jump in. The blue-turned-red notices. Wait, what was that nonsense he just spouted? It resembled English, but I couldn't decode it in time. Best check my journal. 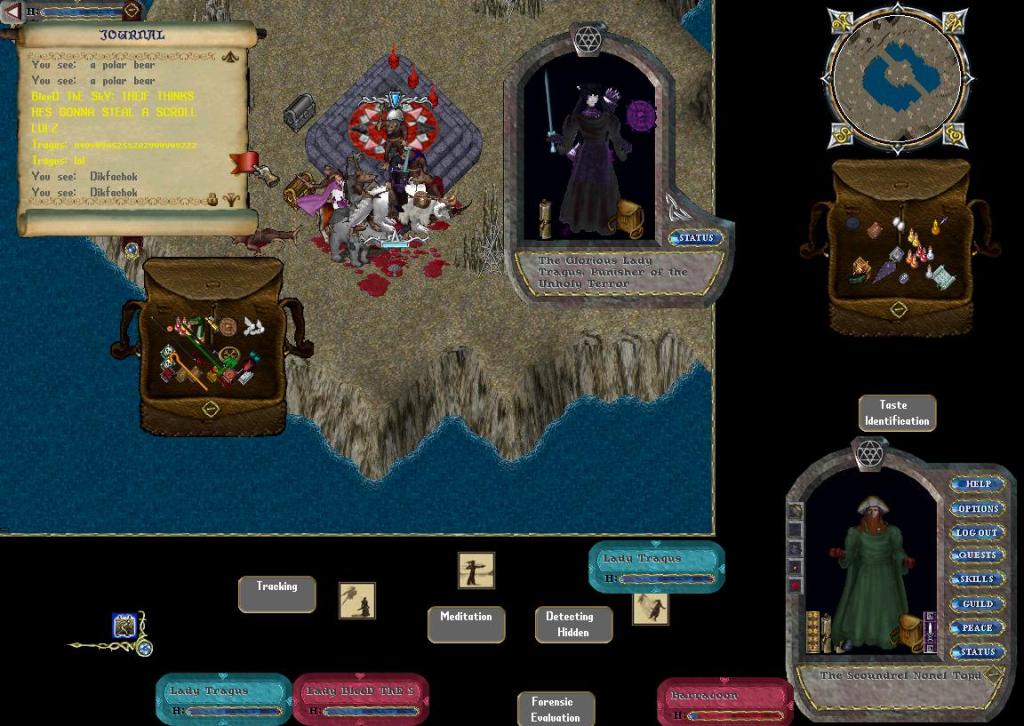 I don't know what a "theif" or a "lulz" is. Suddenly Ifeel bad. What if there is something wrong with this poor elf lady? I mean, in some regions of the world women still aren't getting the education they deserve! Bah, I shake that off quickly. 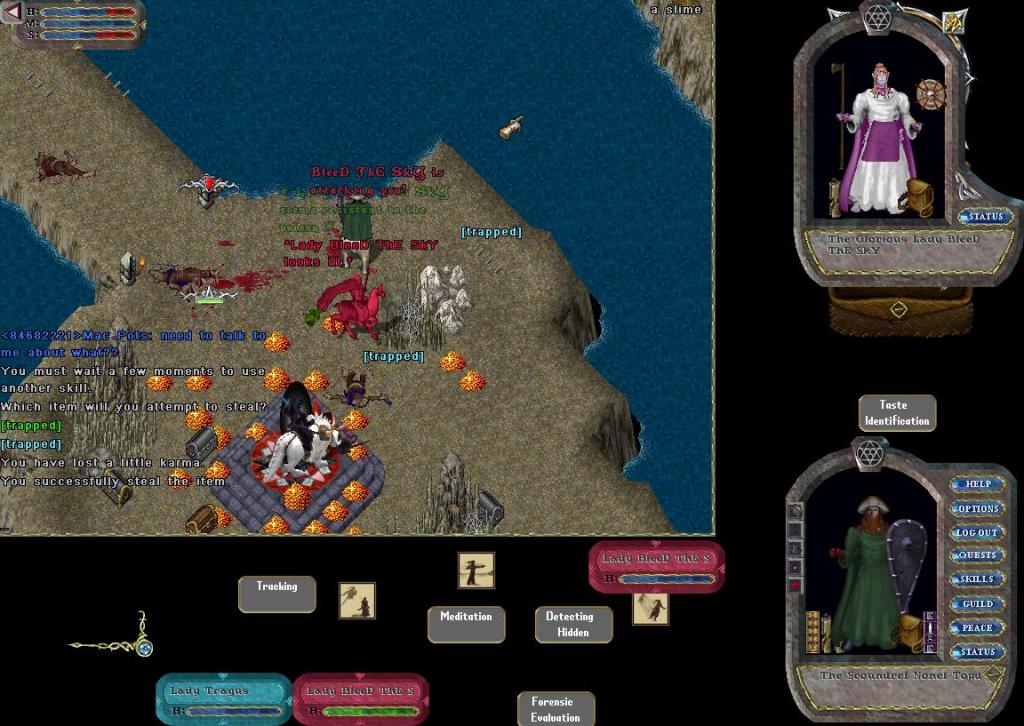 She chases me about Despise for a bit, while I continue picking scrolls out of her pack. All junk, mostly, though a 115 eval scroll I get from her might sell well. I run back to the altar, to see if that blue has anything in his pack. All 110's... ah well, I'll keep stealing from this little unintelligent elf girl instead. It is more fun. She actually tries to kill me, after all. She runs for the Star Room! Bah! Remembering she had an eye of the travesty in her pack from earlier, I decide to make a go for it: 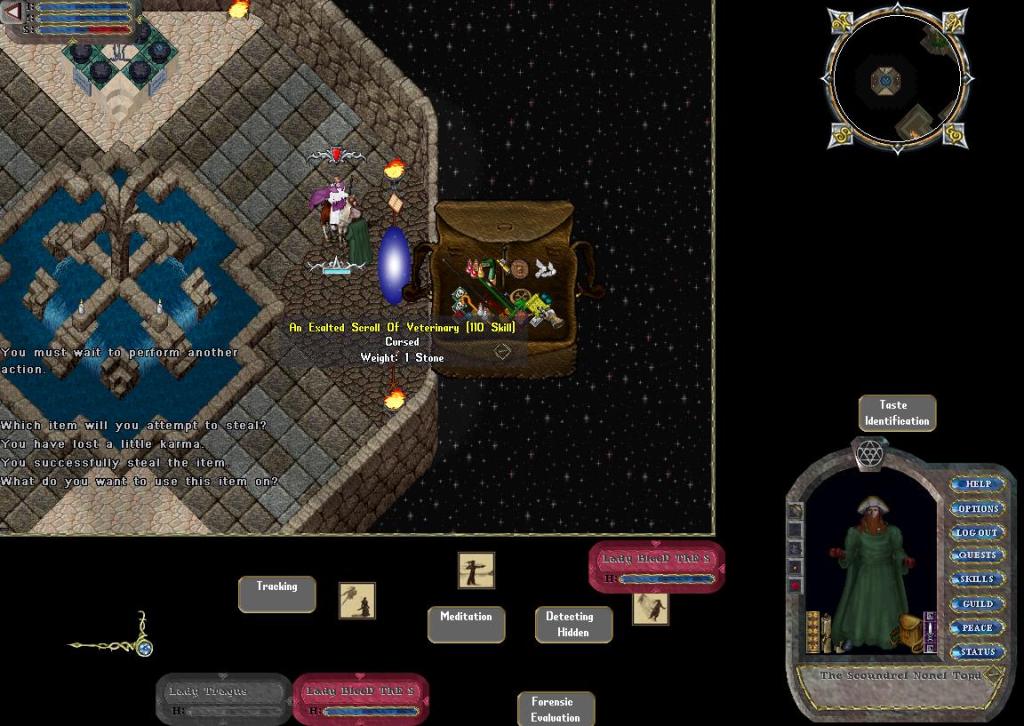 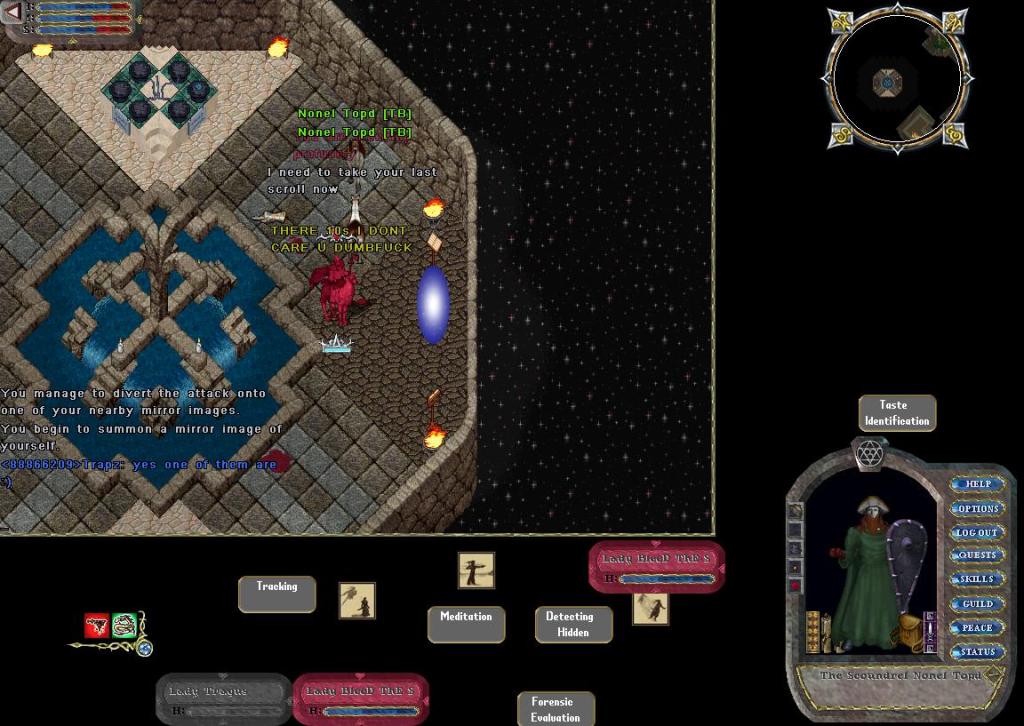 Uh oh. She is getting mad now. Hahaha, now this makes it fun! So, as promised, I nab the last 110. Then, as I like to do with all these melee types, I run circles around her as they keep rolling the RNG trying to get a hit off. See, funny thing about dexxers. All you have to do is move 1 tile over, and they can't hit you! Hah. This one does get a few swings off on me, though: 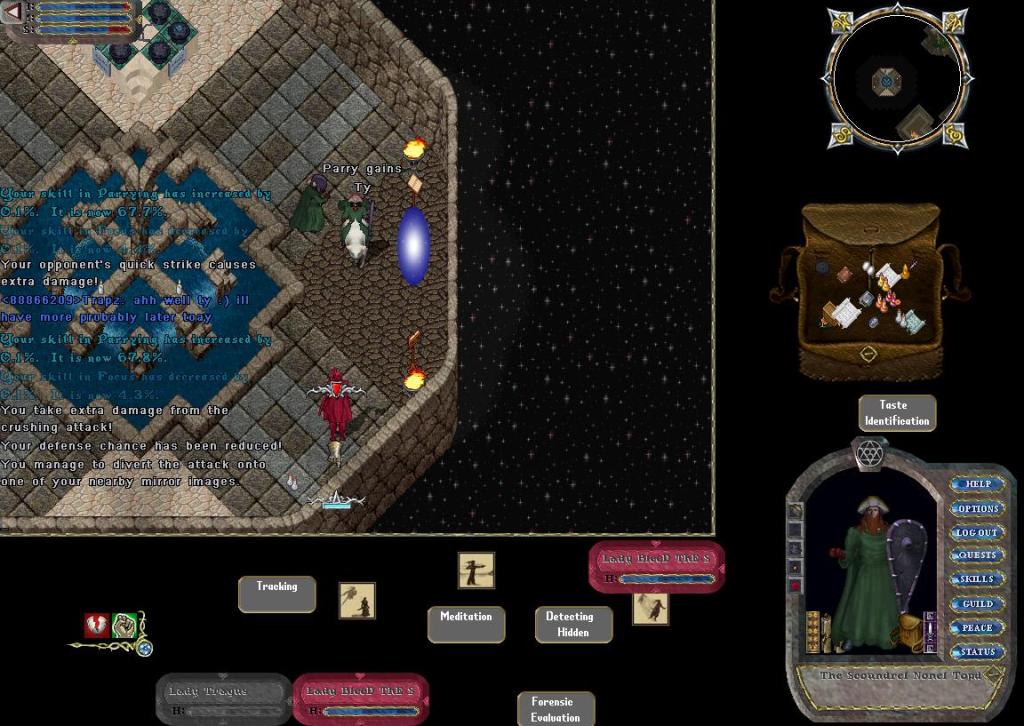 Like every stealing spree, I like to finish it off by taking the Skull of Greed. Makes sense, right? 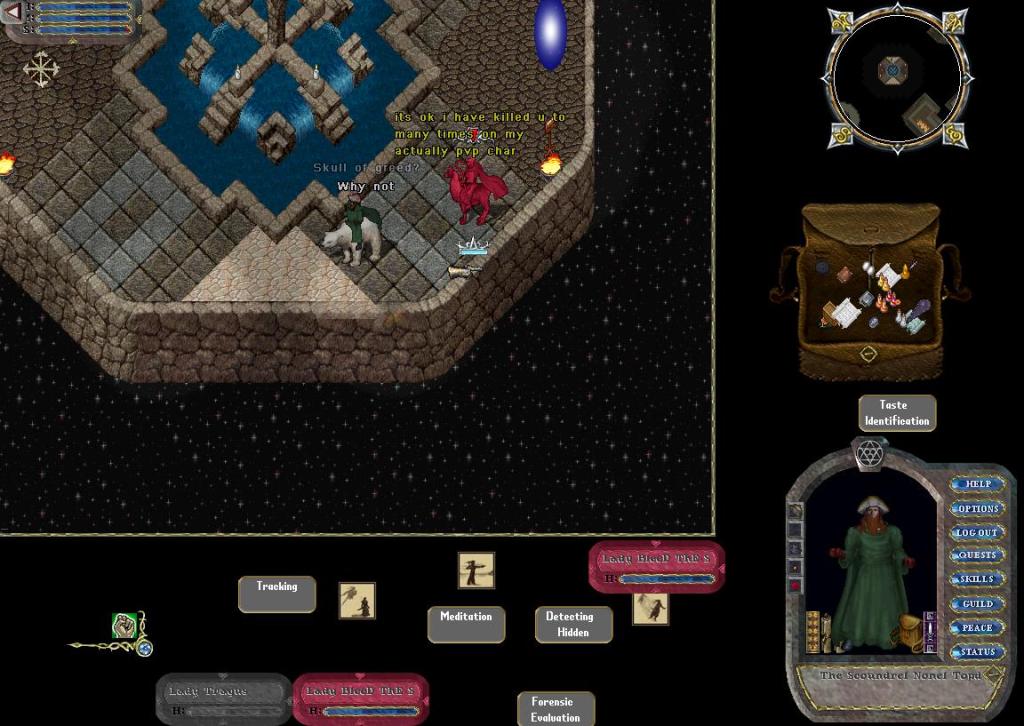 She has? Odd. I mean, I know my character is brutally under-trained. The suit is bad. But I am fairly sure I haven't died too many times, yet. Ah well, who am I to say. This could be a great PvP'er, after all! 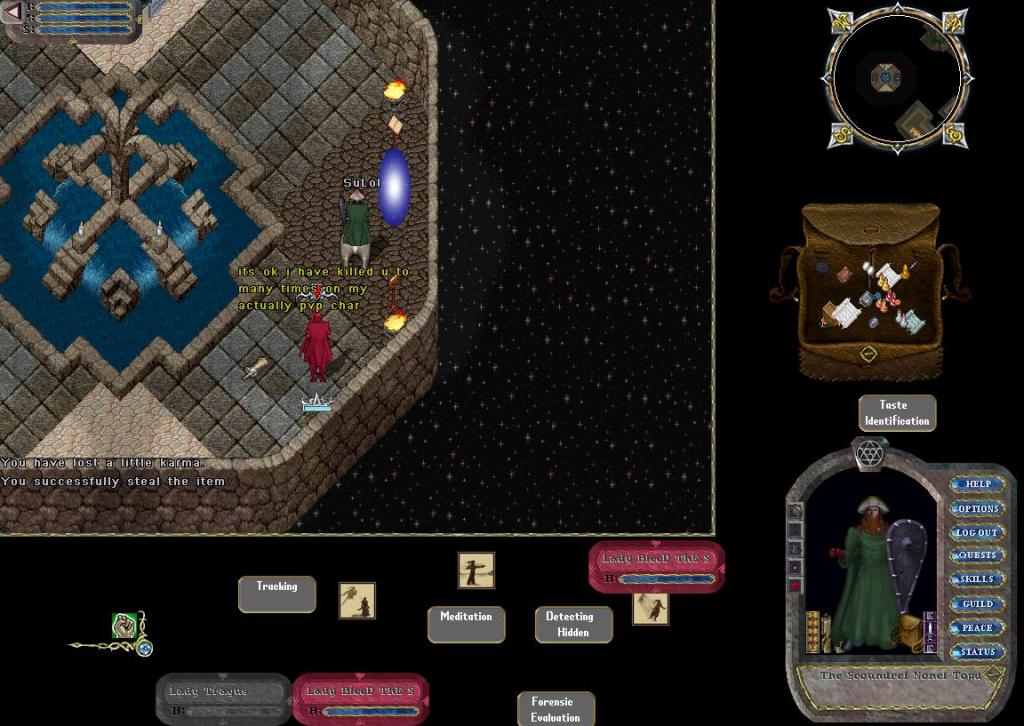 Still, I had a skull to steal. "SuLol"? Hey, give me a break, my index finger is still bandaged up. Stupid shark. He was cute, though. Stupid shark. 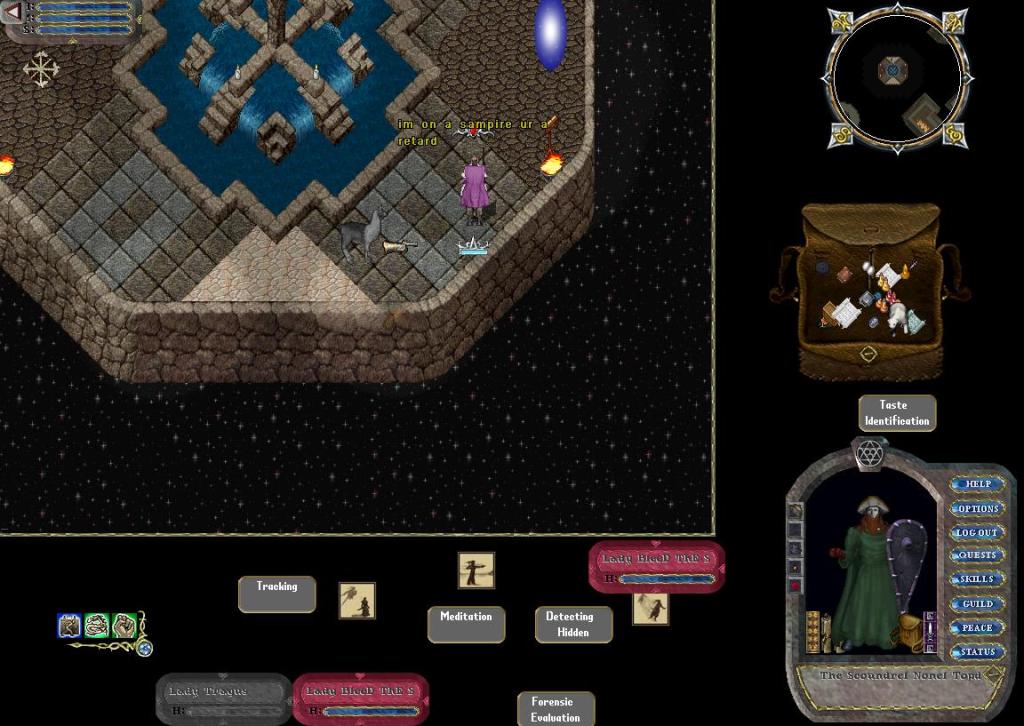 This little girl is a mad person. Daddy doesn't discipline her enough. Or does too much. I'm not sure how it works these days. She seems like a young one, so I have no desire to continue harassing her. I think I'll leave.

Just for posterity... 3 scrolls, a skull, and the Eye in my pack. She was right about her earlier comment. I wasn't going to steal a scroll. I was going to steal 3. 115s and 110s, perhaps, but it is the principle of the thing.

I'm about to log off. But, ah hell, one more check of Despise. Oo, more blues! There's that one that was working with the red. Lady Tragus. I quickly become aware that there are a lot of women in the game these days. Yay!

You know what? I haven't GM'ed snooping yet. I'm going to take that. 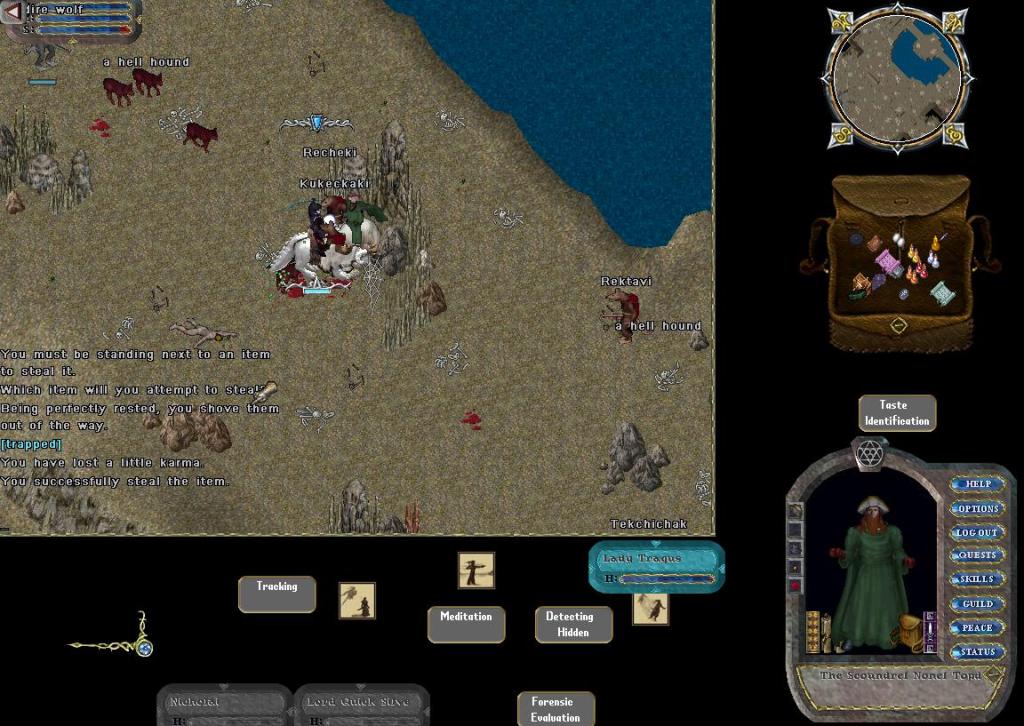 Woot. Okay, time to sit back and watch them work the champ. Shoot! It drops, and I'm not able to get to a scroll in time. Wait, wait, one blue left! 1 scroll in their pack, MINE!

It is another 110. You know, by this point I should have got a decent scroll just out of dumb luck. Oh well. A tamer comes to the Star Room, and decides he wants me dead. Eh. Might as well snoop his pack, then. A crappy butcher knife? Why not? This is like the junk them Siege thieves get to steal, right? It IS a shiny knife, after all. 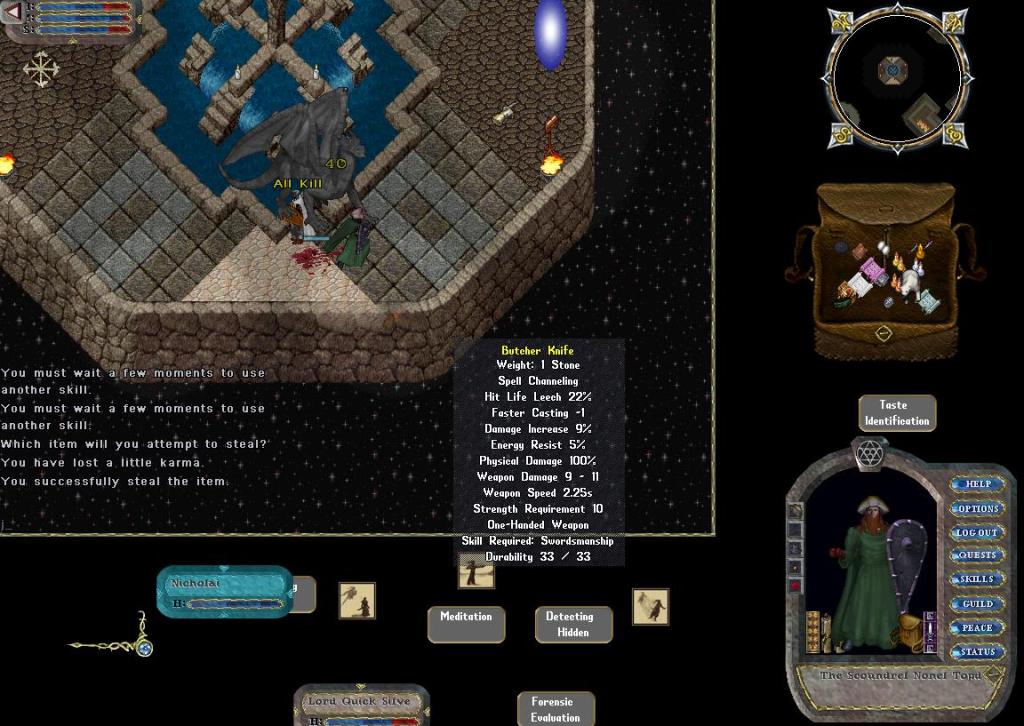 What else is in her pack. An aud-chair? What the hell is that? Might as well take it so I can do some research. 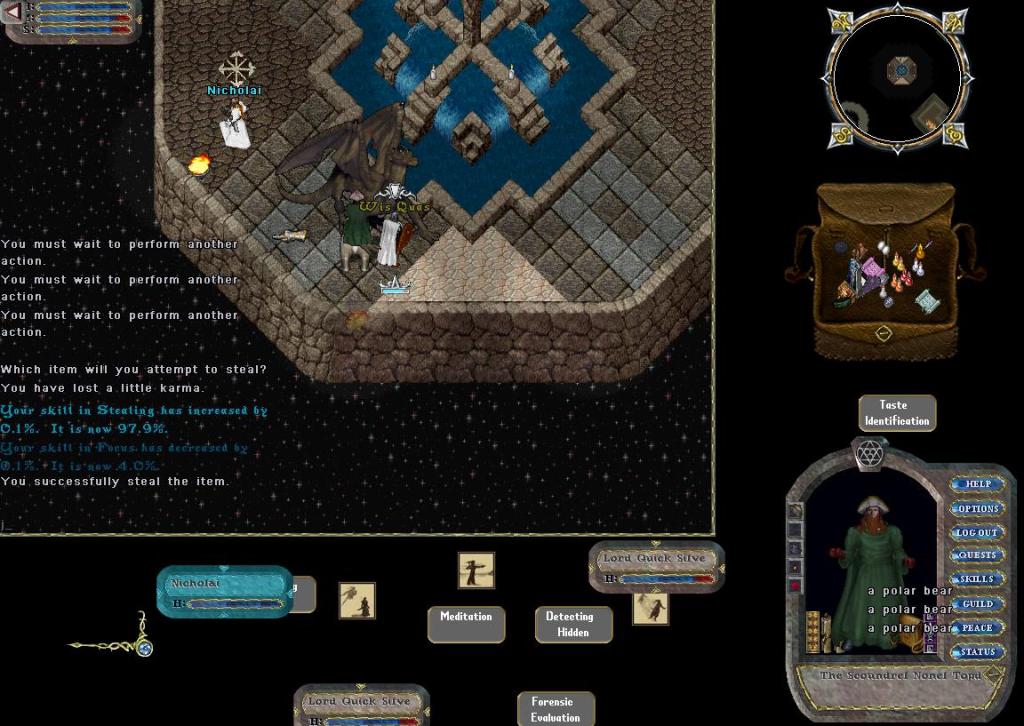 Woot! A stealing gain! It is after this point I feel I must inform them that the reveal spell doesn't work on proper hiders. This one knows how to adapt, and switches to fire fields. What else...into their sub-pack... 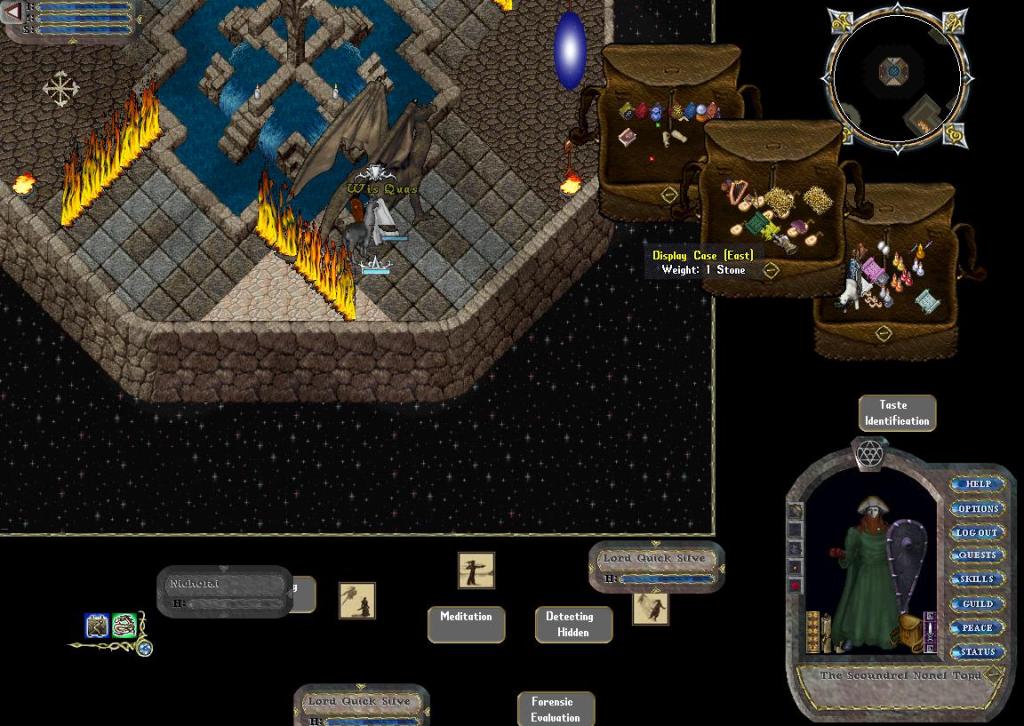 A display case? Eh? Man, I've been out of the game too long. Yoink. 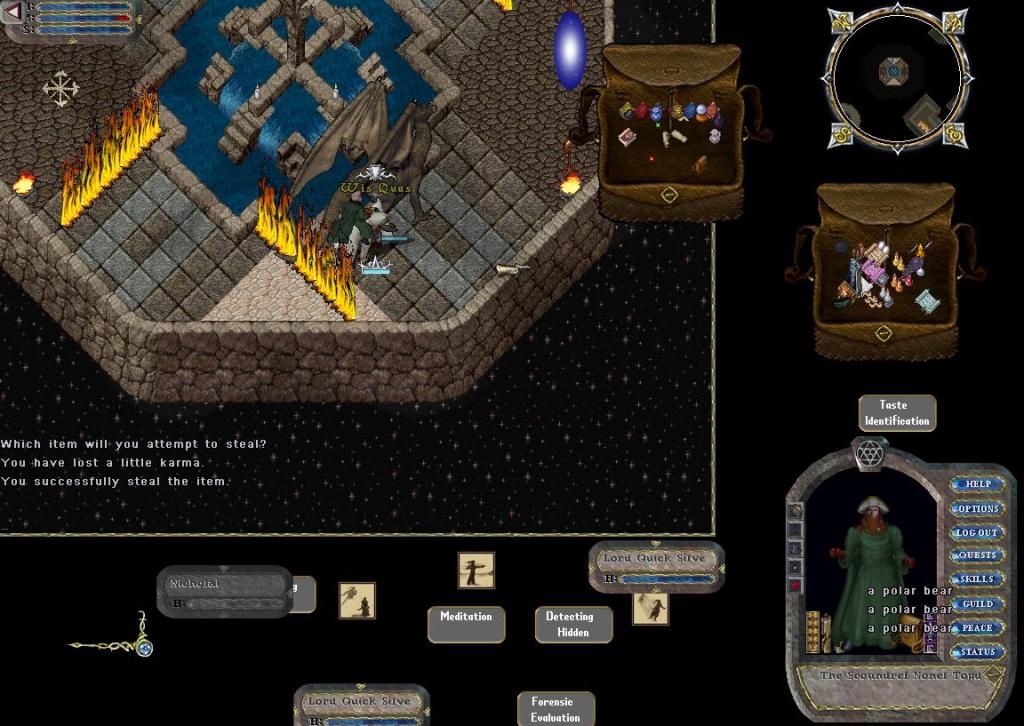 At that point you may notice the bandies in my pack. Yeah...some other blue ran through with bandies. Why not take them? Go on, tell me! You cant, can you!? Har har har har.

A lap harp? Sure.

That's it. I call it quits! All in all, a couple mil in junk and a bunch of skill gains. It was the skill gains I was most happy about. Parry, stealing, I think I even saw a wrestling gain in there somewhere. Woot! Well, no really good ganks from reds or enemy factioners, but it was still...sorta fun. Oh well, another day perhaps.