Episode 0322: Theft of the Necromancer's Wand.


Ben Ocea, Tyrone Jones, and The Tamer are all played by me, Shqiptar.

I, Ben Ocea, had decided that it was that time again. It had been a while since I infiltrated a guild for some goodies. Attempting to join as myself was proving fruitless. Guilds have recently taken extra measures to discover if a potential guild member is thief or not.

I decided to dig in my pockets and get enough gold for some SoulStones. With them I could transfer my stealing skills to my friend who is already in a guild. 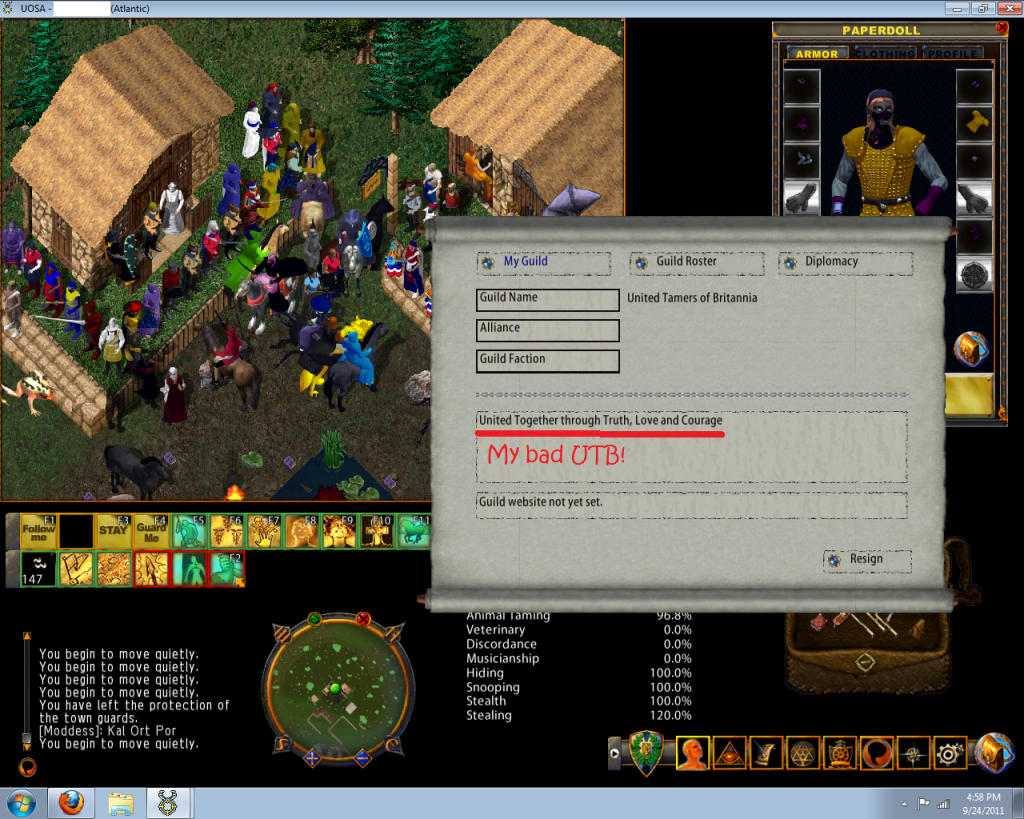 Ah the United Tamers of Britannia. Let's say I enjoyed this choice. Why you may ask? Well they don't allow people under 18 in their guild. I do not approve of any discrimination and that includes ageism. It was time for punishment... and a little fun!

After using the power of the SoulStones I successfully transferred my skills to my good friend in UTB. My friend shall simply be known as "The Tamer" to protect his identity. The Tamer immediately began snooping around for some rare items. 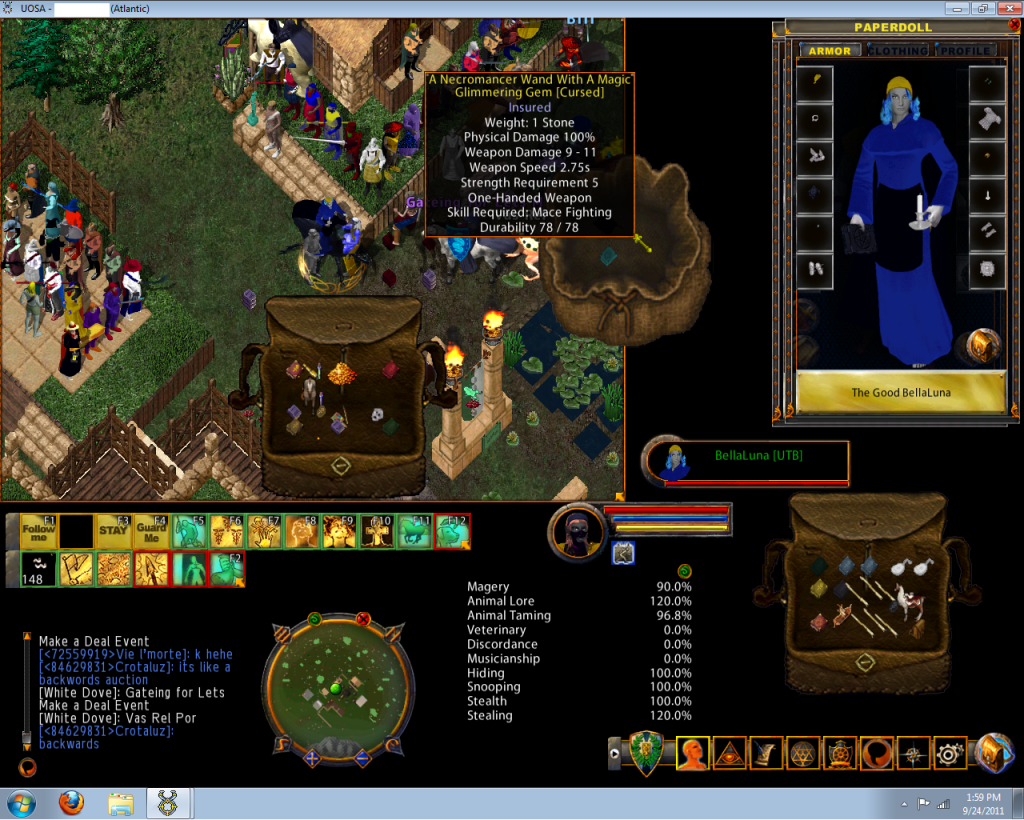 It didn't take long for him to find a very rare and unique item. Sadly it was insured. The Tamer decided to check other guild mates backpacks. 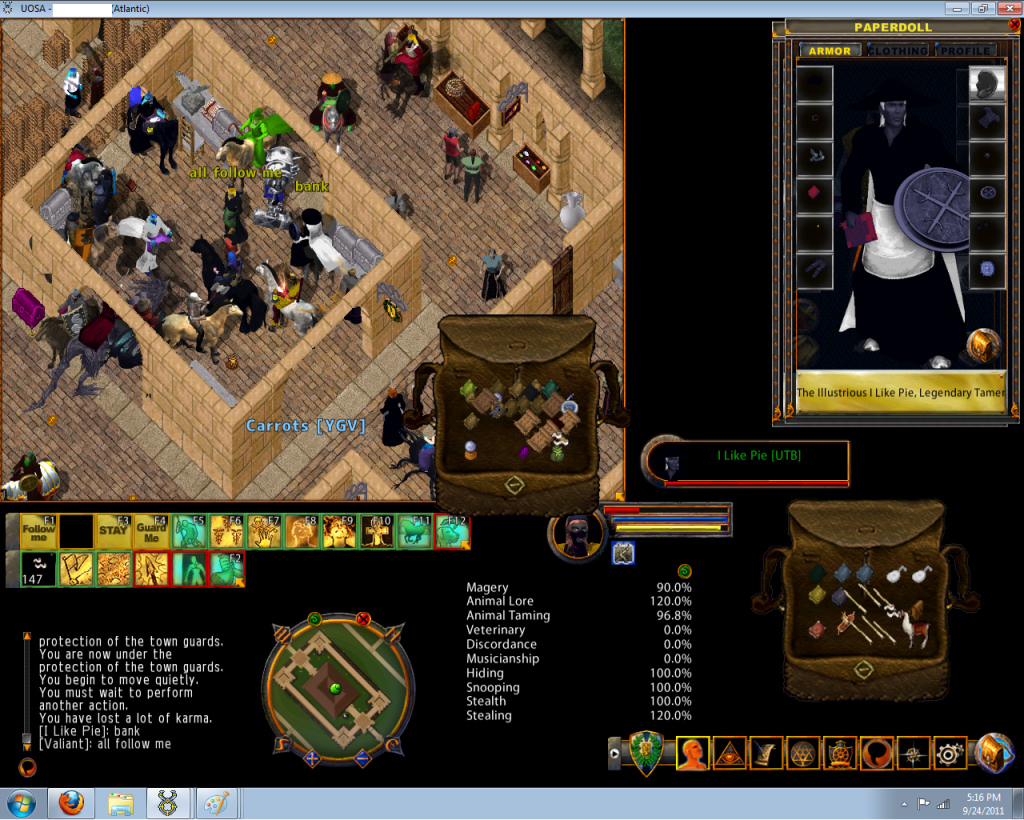 It proved to be a failure. It was then that me and The Tamer hatched a plot to get Bella Luna to uninsure her rare wand. We had to bring in another person for this. Enter Tyrone Jones. 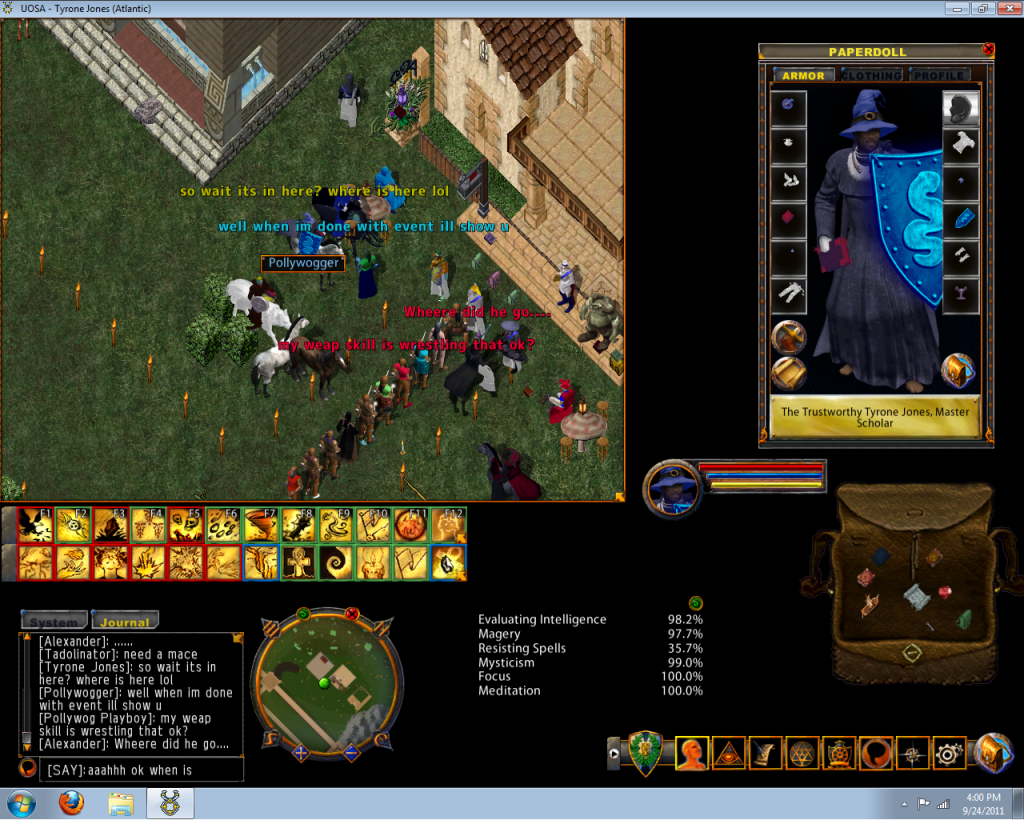 Tyrone went right to work. We decided the easiest way to get her to uninsure the wand was to put it on her vendor. First Tyrone asked her where her vendor was located...

Too easy. Suspecting nothing amiss, she easily gave the location of her vendor. This would be where The Tamer would wait for his victim. Yet, The Tamer decided to test his luck in Felucca while Tyrone was working. 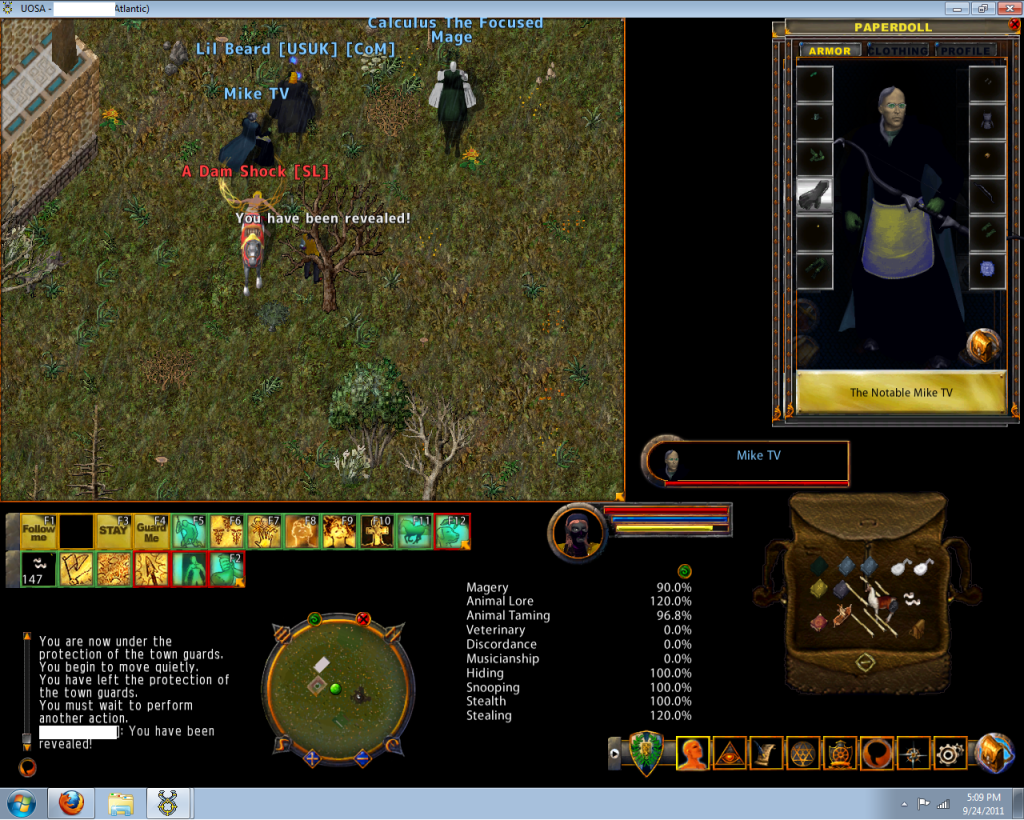 *sigh* Sadly he wasn't exactly cut out for this kind of thievery. He was quickly revealed... 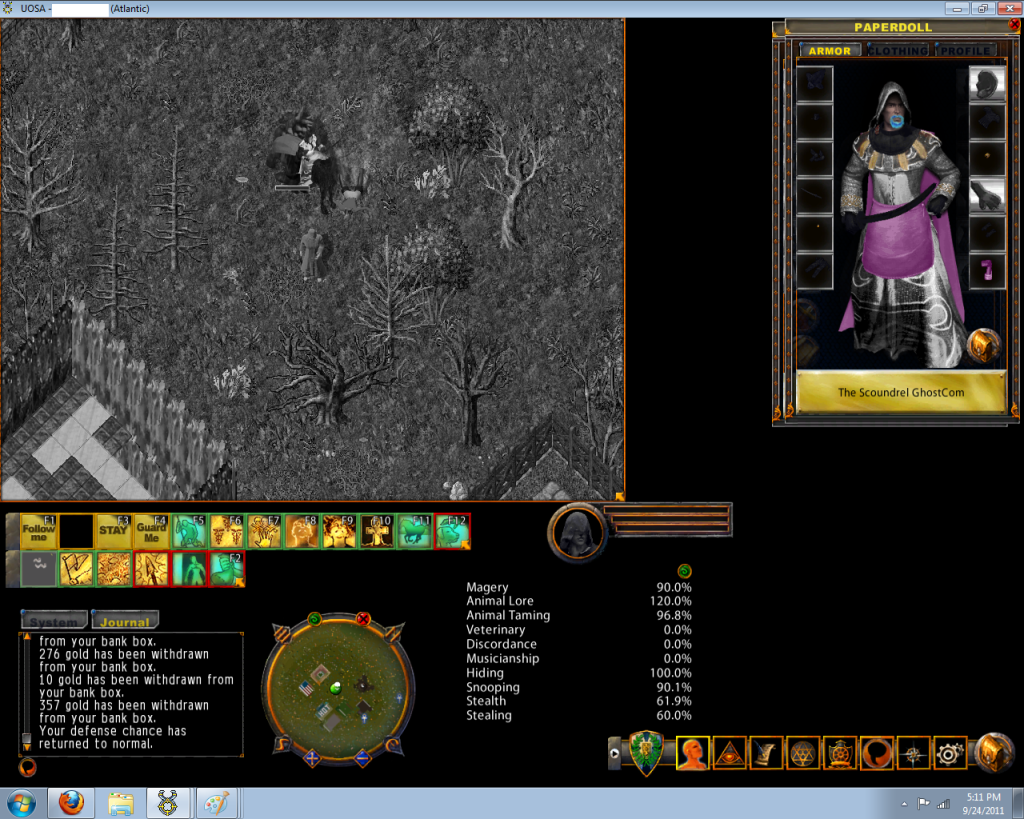 ... and then slaughtered. Maybe this was karma at work? Nah, I never believed in karma... he just sucked hahaha.

Enough of fooling around. It was time to go in for the kill... er theft.

Tyrone and The Tamer got into position. 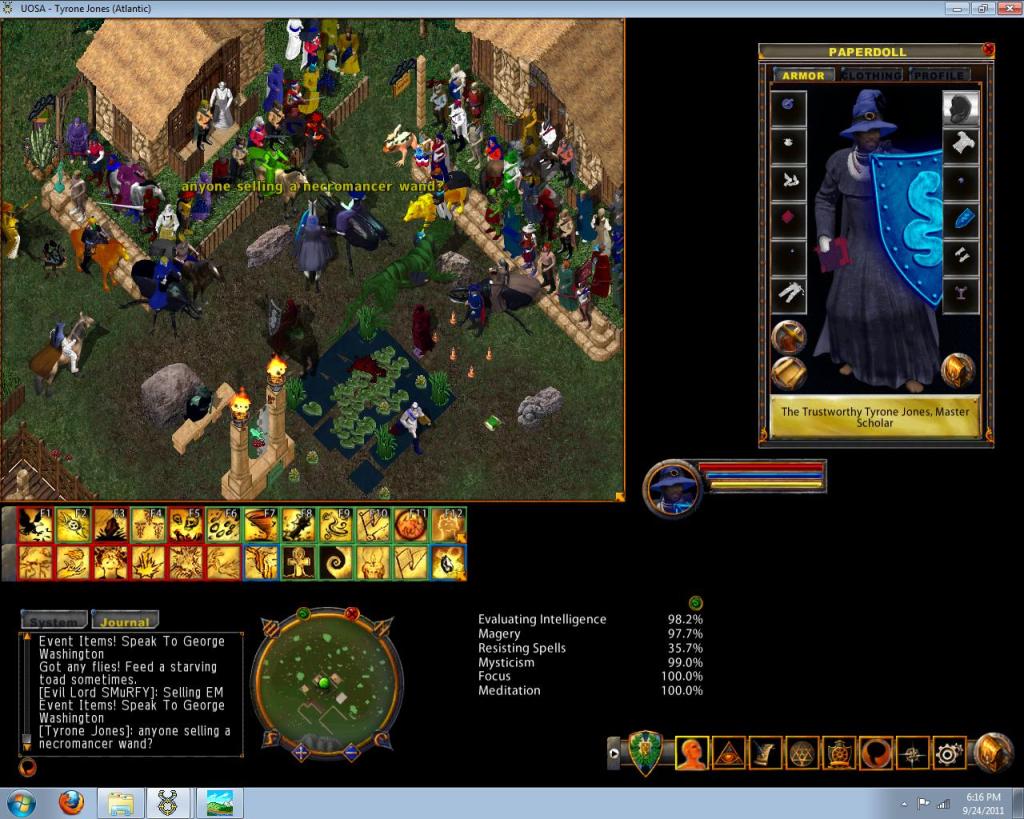 Tyrone starts pretending to be a potential buyer. We all knew that Bella Luna had the wand. We wanted her to feel comfortable and not at all suspicious. She went for the bait. 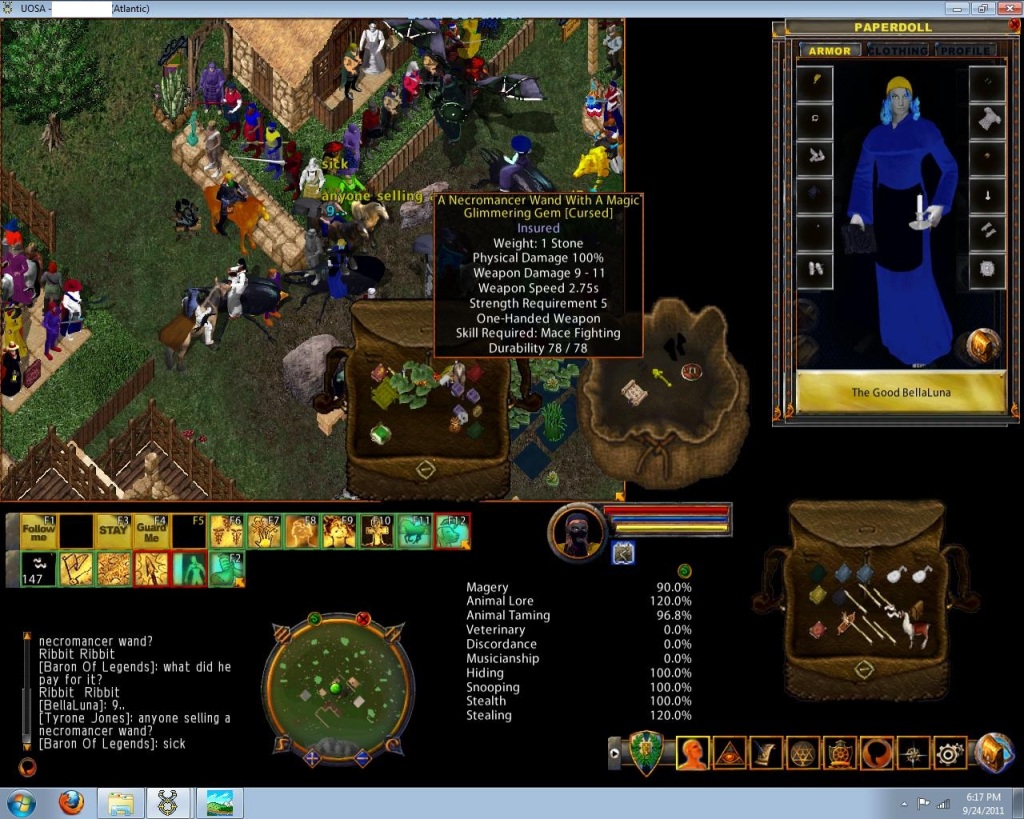 She got her wand and was ready to place it on her vendor.

Bad news. The Tamer isn't exactly steady handed. Having never stolen before he was nervous and failed to take pictures from this point until after the theft when he hid by a house. Regardless the remaining pictures do provide ample evidence that the theft did take place but let me fill you in on what happened before the theft.

Bella Luna was offered 80mil by Tyrone Jones. She uninsured the wand and The Tamer went for the steal but missed! Tyrone quickly covered for The Tamer's initial blunder. He told Bella Luna that he had forgotten he only had 70mil. He asked if that was okay. Luckily Bella Luna went for it. She took the wand off the vendor to change the price. This time The Tamer grabbed the wand from her bag. He had done it.

The wand was ours! 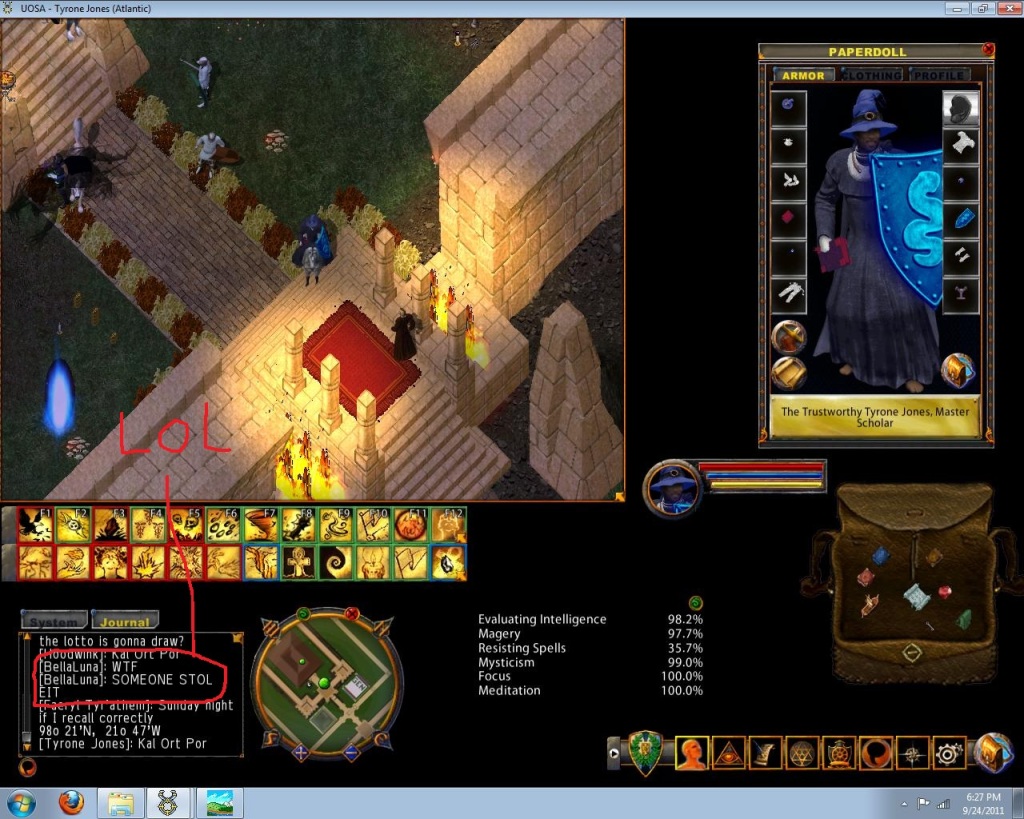 Tyrone caught this funny little realization that Bella Luna had after her wand was stolen. 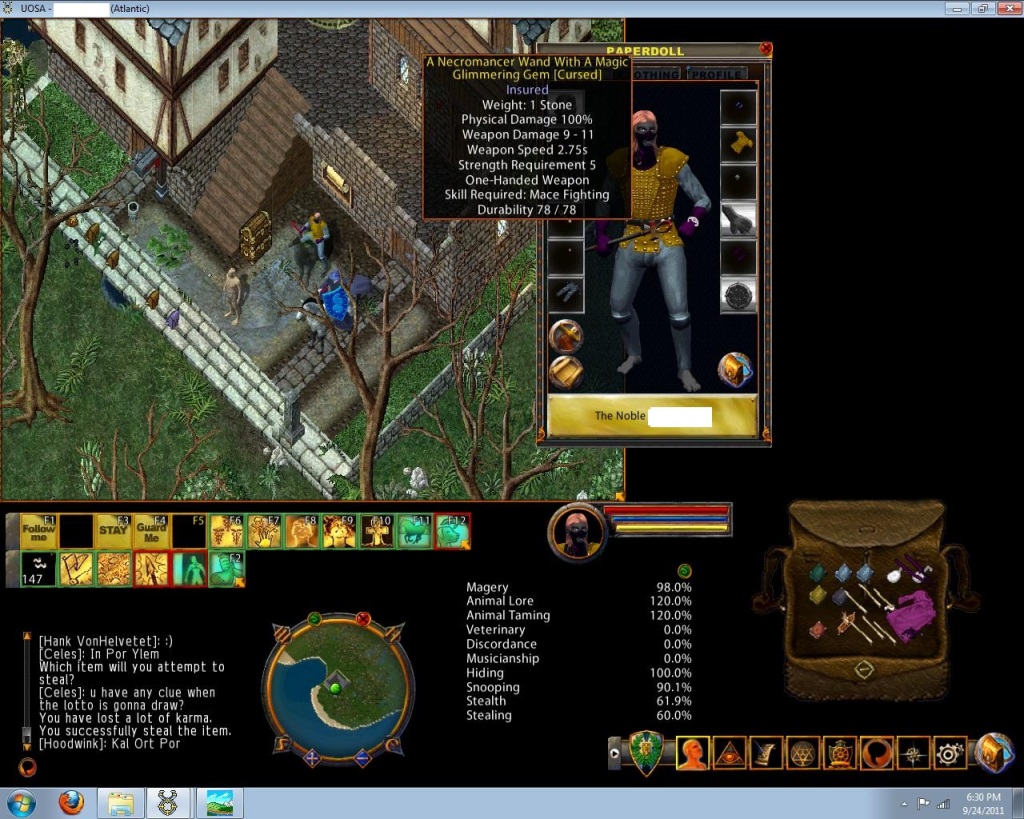 The Tamer poses with the wand before he gives it to me and gives me back my stealing talents with the SoulStones. 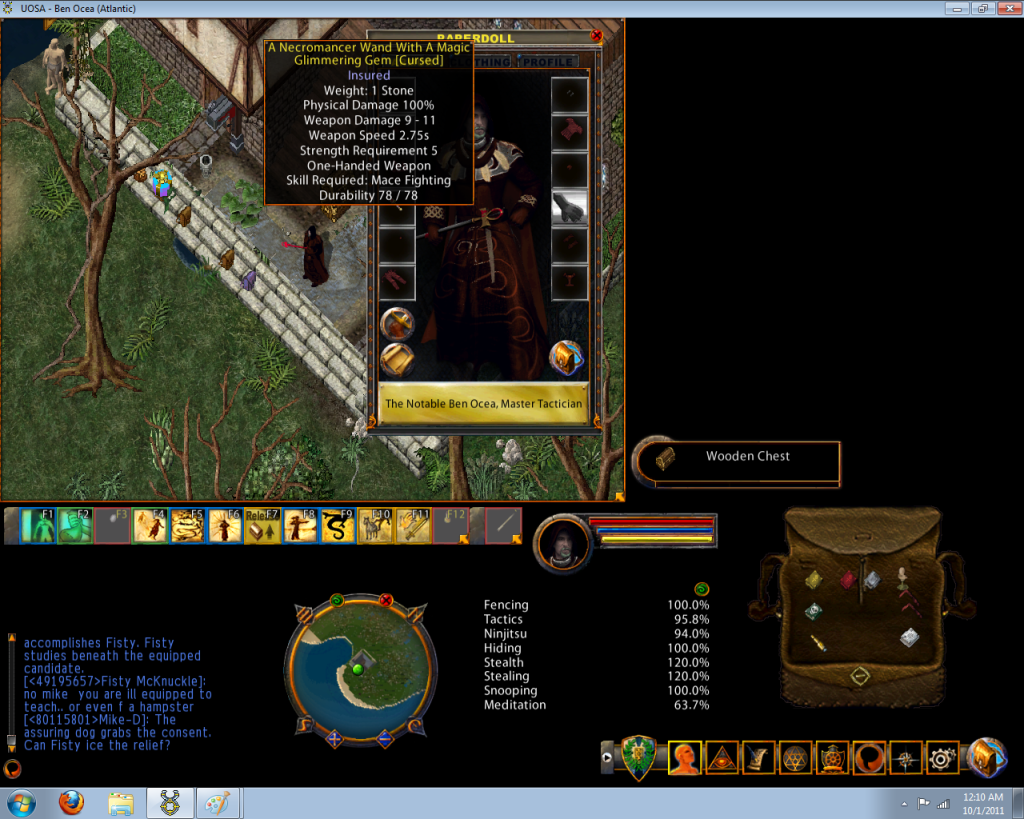 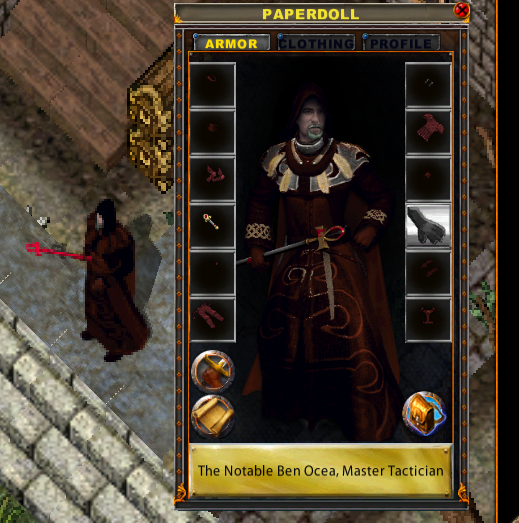 Ah in the rightful hands of a true thief. Though I am definitely going to sell this little wand... I need to get myself the Assassin suit. I'll look fly as hell in that!