My clickin' finger was injured in an incident involving a shark and a really big hook... but that wasn't about to stop me from trying to get some thefts in. After all, I have 4 other fingers on that hand!

As any good faction thief should, I start my day off with a quick easy theft. The Minoc town sigil from CoM base. Heading back home, through Brit, I am surprised to see a naked-type lady standing at the bank. Hrm...I had best check her pack for her! There's a lot of low-life types around at this hour! 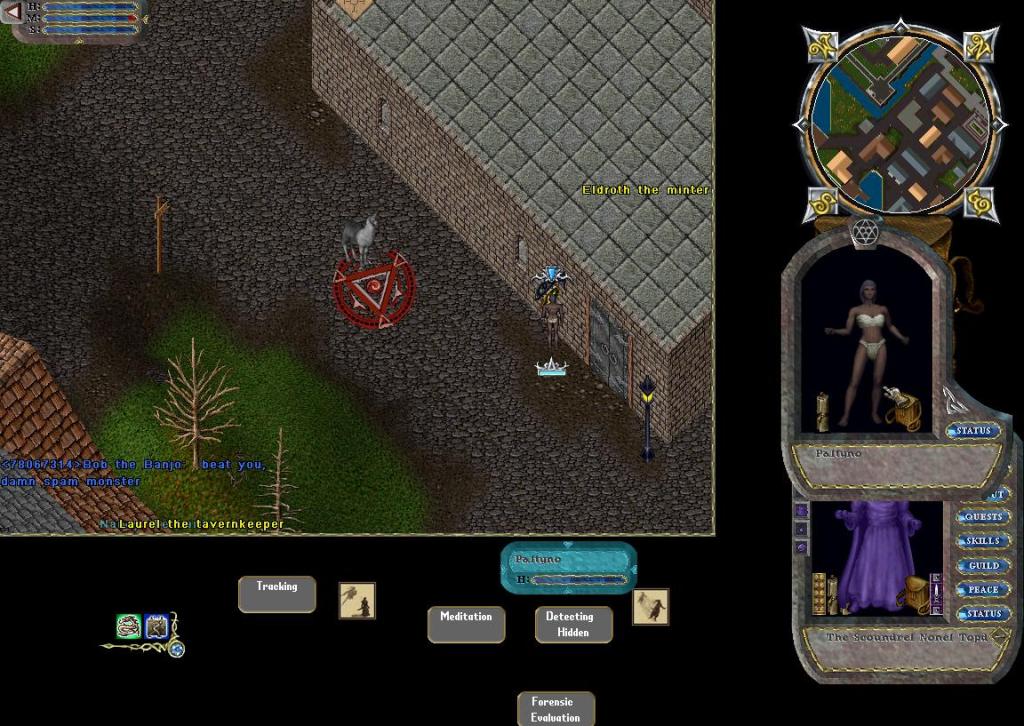 Hrm...nothing but a practice weapon and some junk armor. Well, I didn't walk 10 tiles out of my way for nothing! 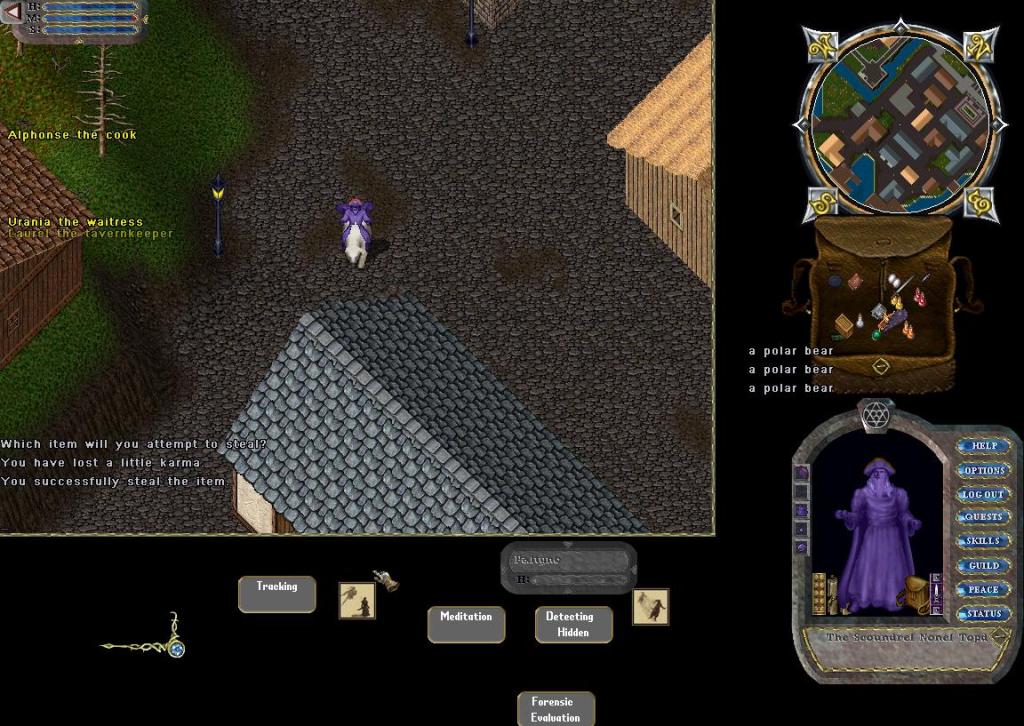 So I take it. I go and place my sigil, and take a moment to see what these practice weapon longswords go for these days. 20k!? Bah! Fine. I best go find some marks with something worth taking. Like usual, my first place to check for marks is the Despise Baracoon spawn. Seems I had just missed the champ... But, hey, this red TB fella has a 110 magery PS. Not worth spit, but the urge to steal is always overwhelming. 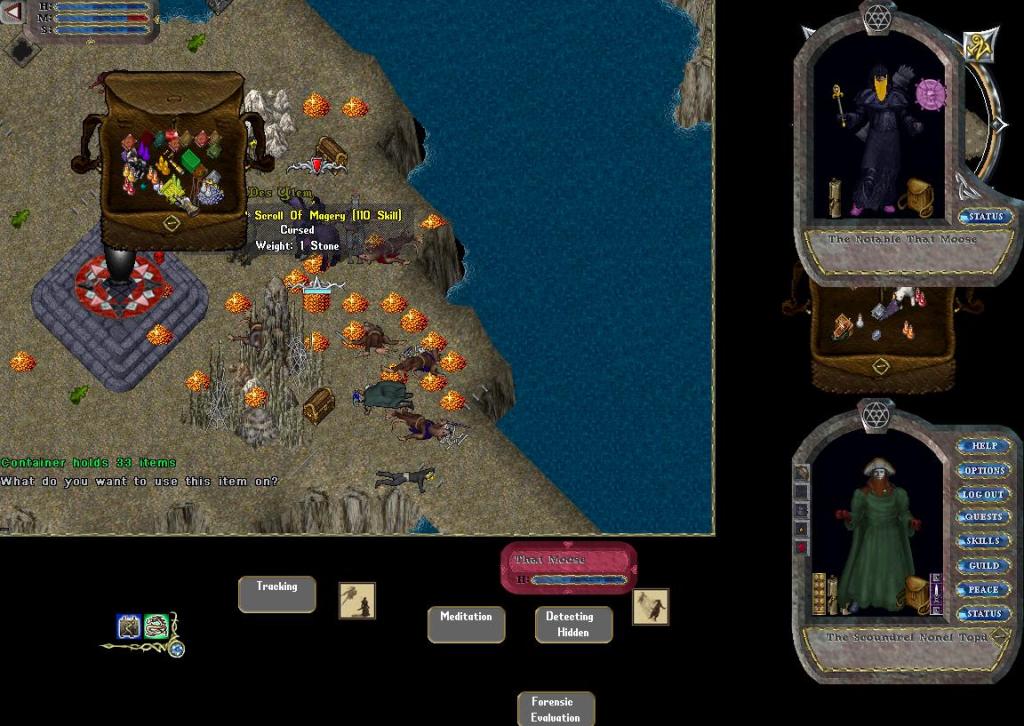 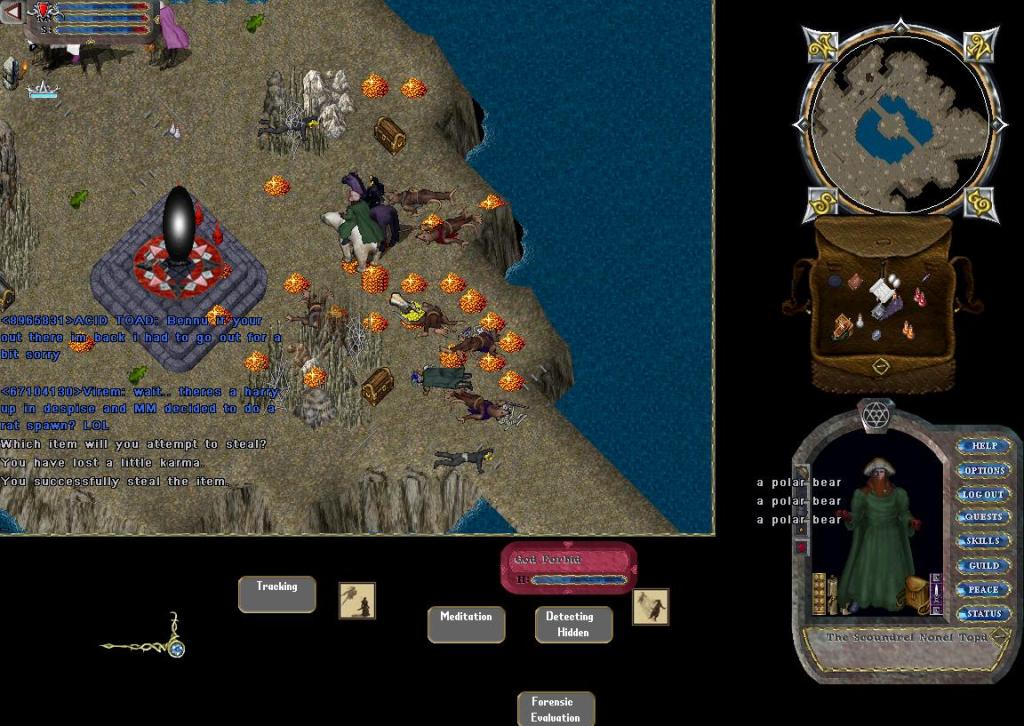 Off I stealth, to have a look around. I am surprised to suddenly see a group of the same TB, from the MM guild, and a group of SL folk fighting. Ah well, maybe I can steal someone's bandies and ruin their dexxerness. No bandies, but...oo, shiney! Ima yoink me some silverage. 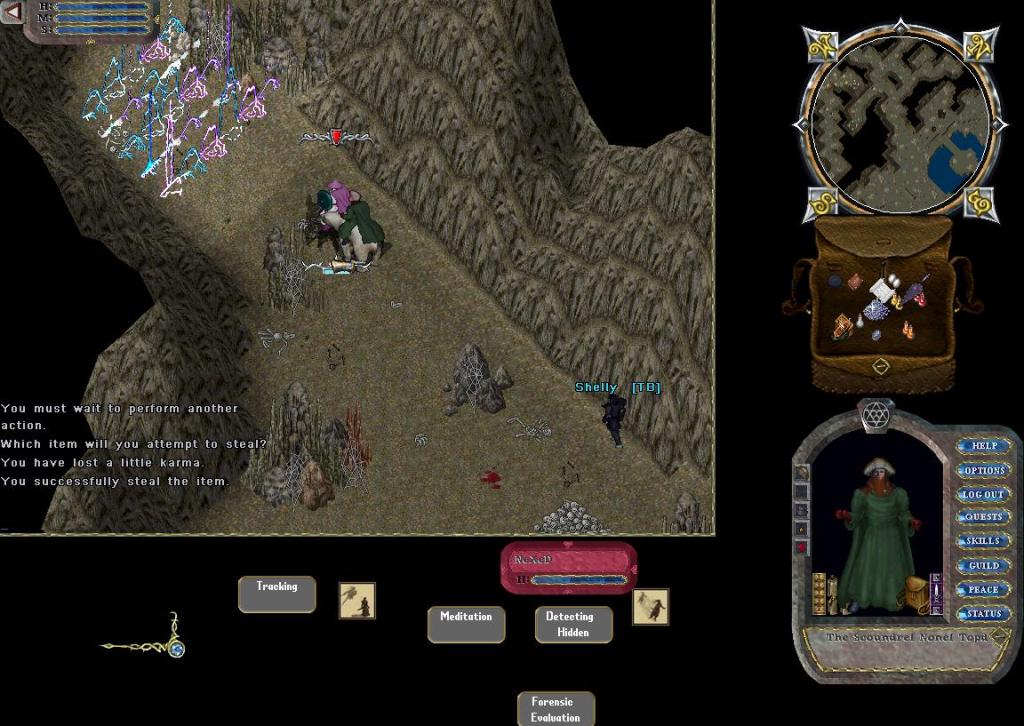 Uh oh. Steal their scrolls, but don't touch the silver! Now they're after me. 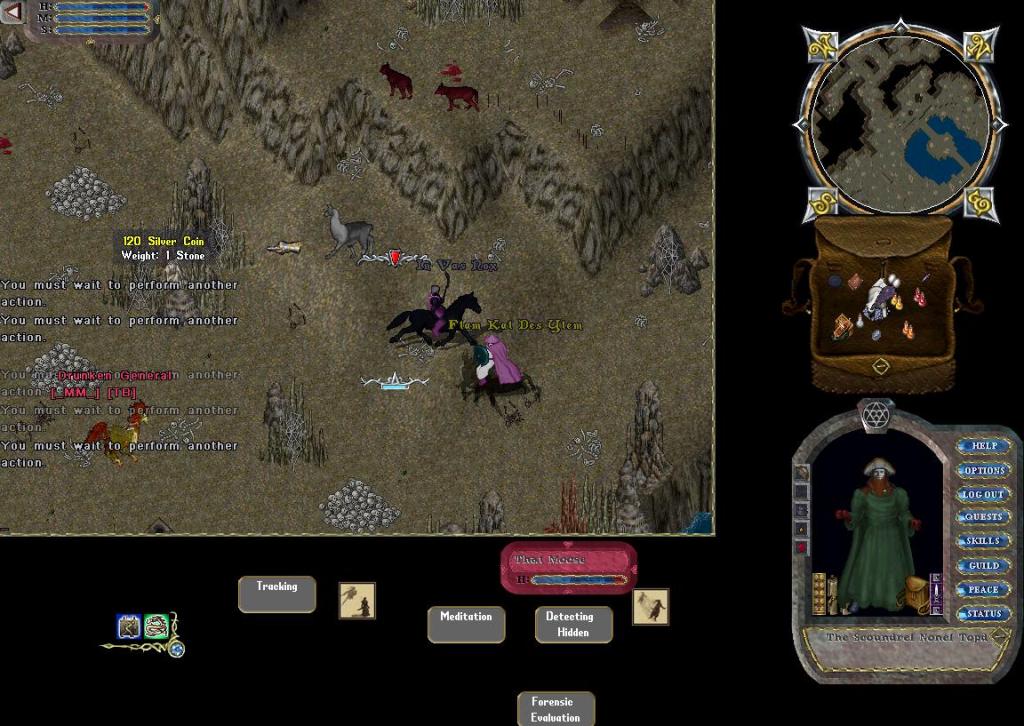 Well, now they've just egged me on. I follow them around for a bit, and...oo, more silver! I don't care what anyone says, it has a shine only a raccoon could appreciate! 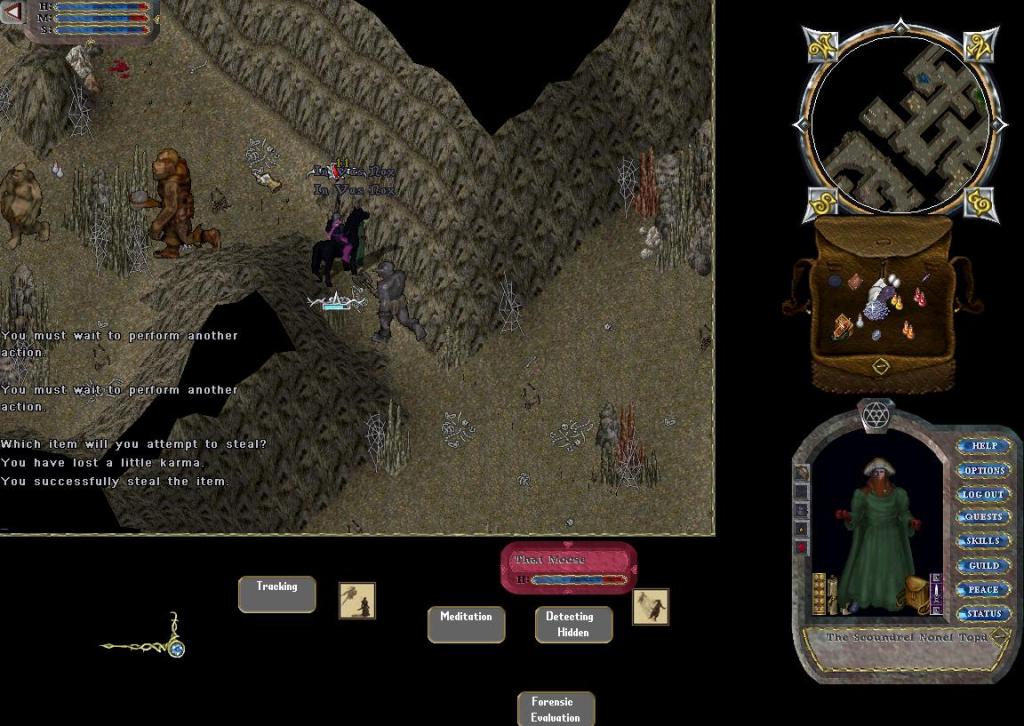 And my silver fetish goes on... 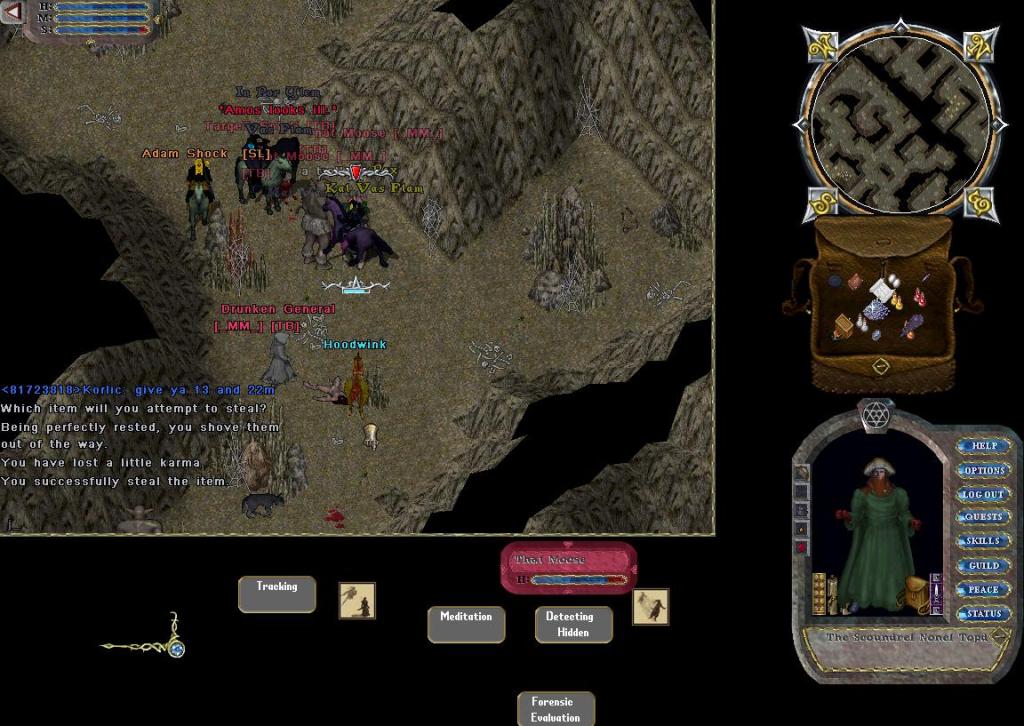 SL and TB reengaged in their earlier fight. Too much running around and seemingly nothing more to take. Might as well go add to my little collection of stolen Atl shinies. 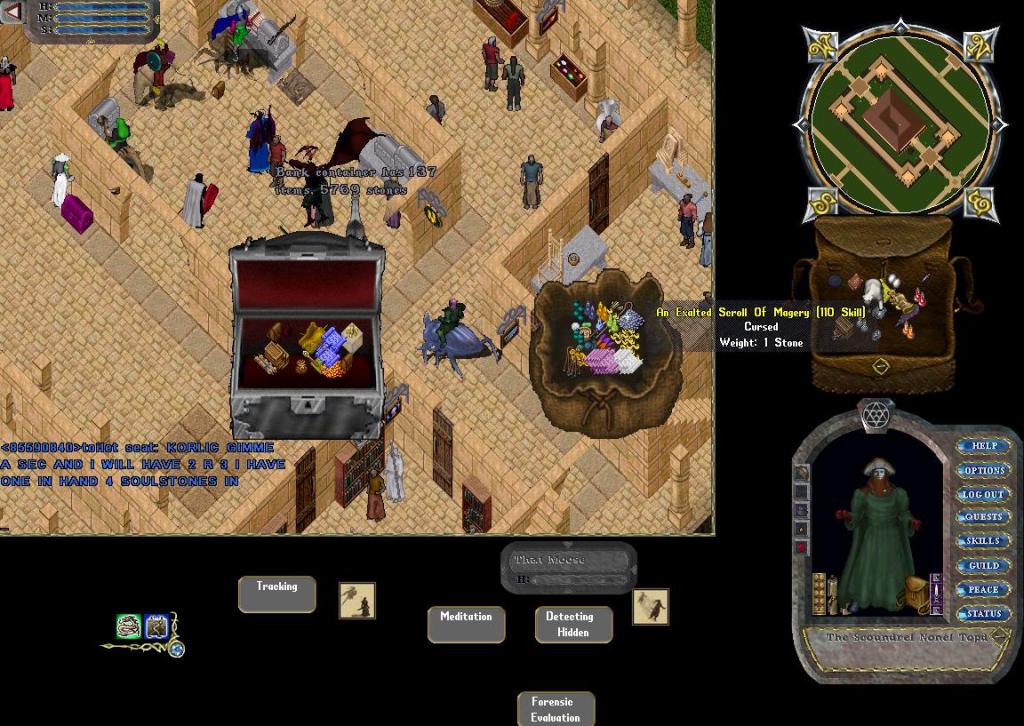 Upon returning to the Baracoon spawn, by way of Fire, I find the place abandoned. Heading to the the Star Room, I am surprised to see the gate for the Harrower up! I've always had good luck stealing stat scrolls, in the past, might as well go check it out.

Ah hah! And it is in Despise, too. Upper level. Here I find my red TB buddies from before! And this one finally has something worth taking! 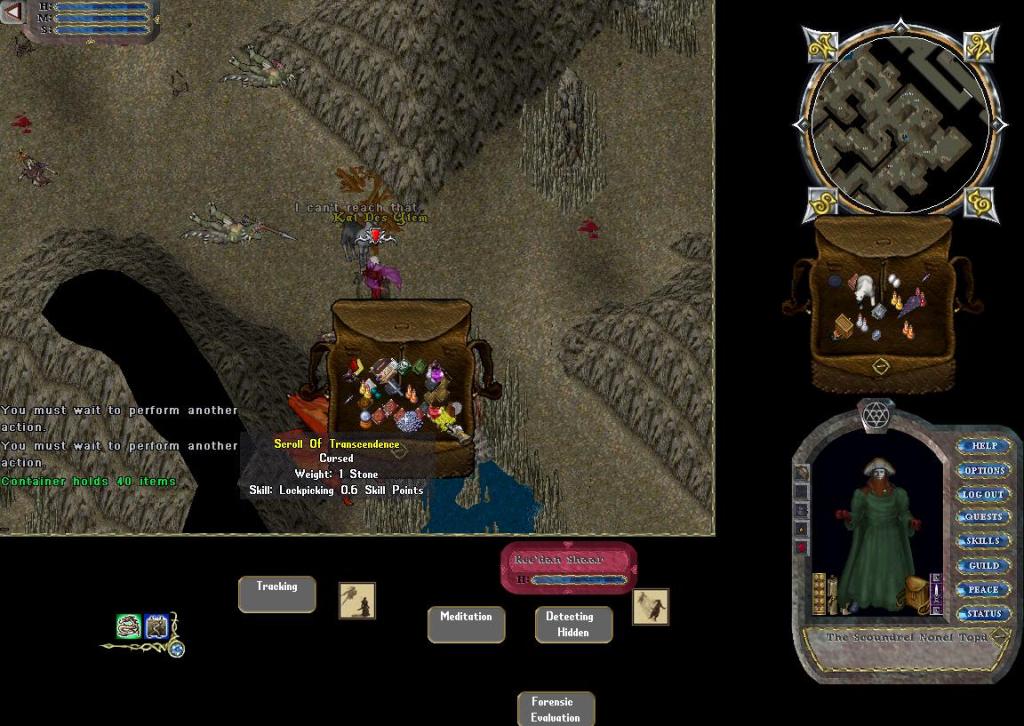 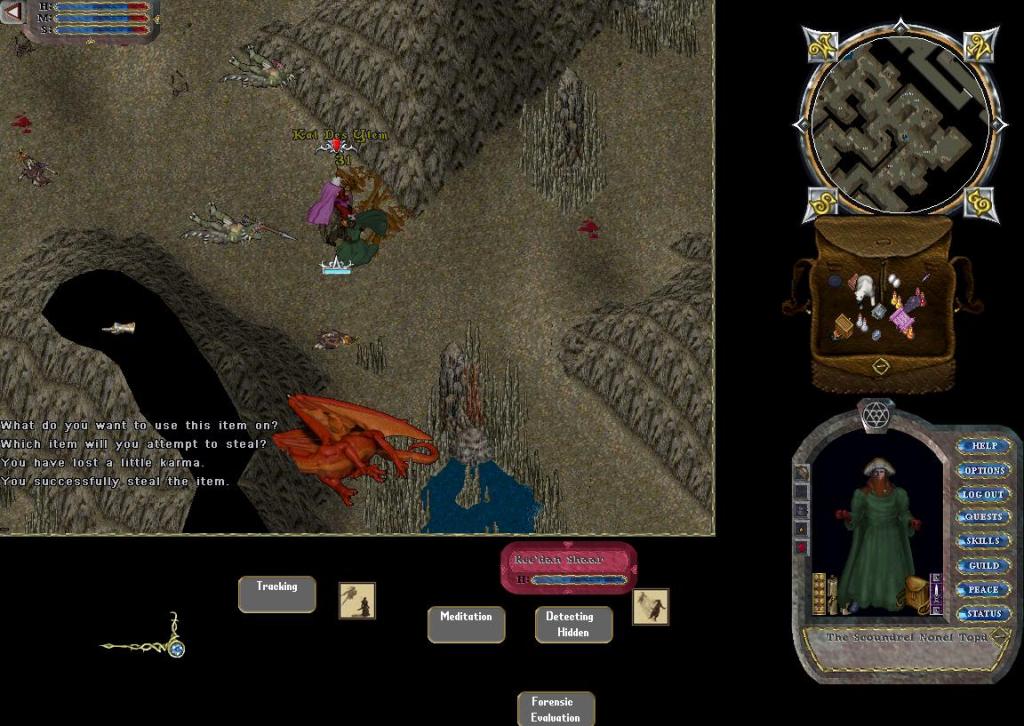 Thief in distress! Cheese it!

Well, he was alone. No problem getting away. A blue and their dragon comes up, next, looking for the Harrower no doubt. Checking their pack, I find my favorite of all steals! Bandies! They don't call me the Bandie Bandito for nothing. Yoink. 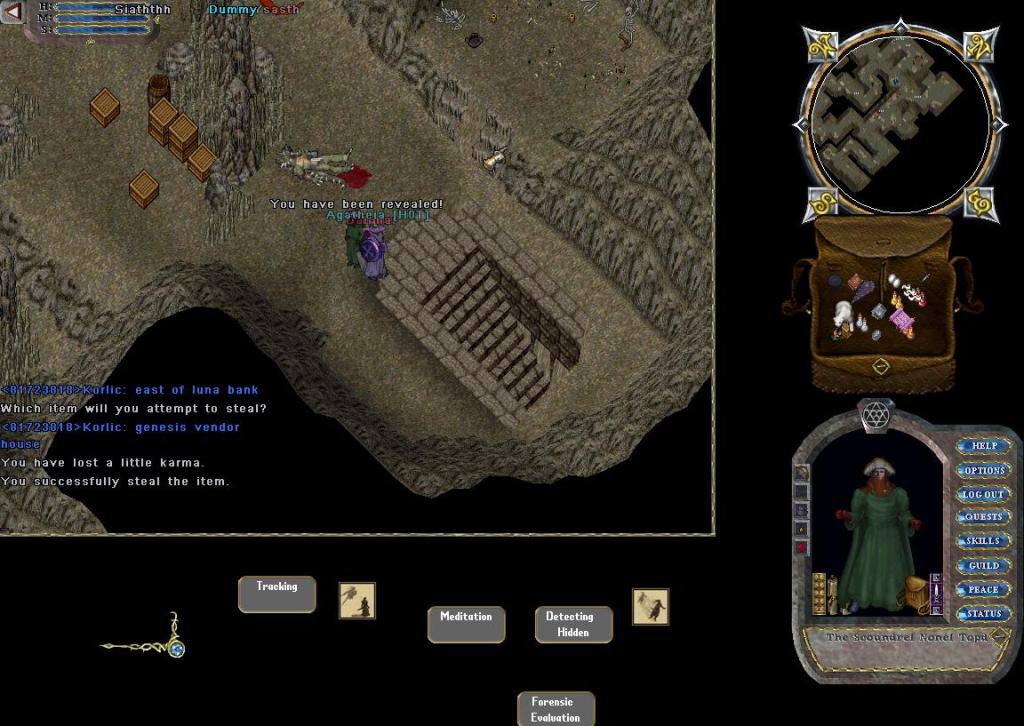 Heading outside I find more of these red TB types! Sheesh. They are like termites, eh? Might as well snoop him... 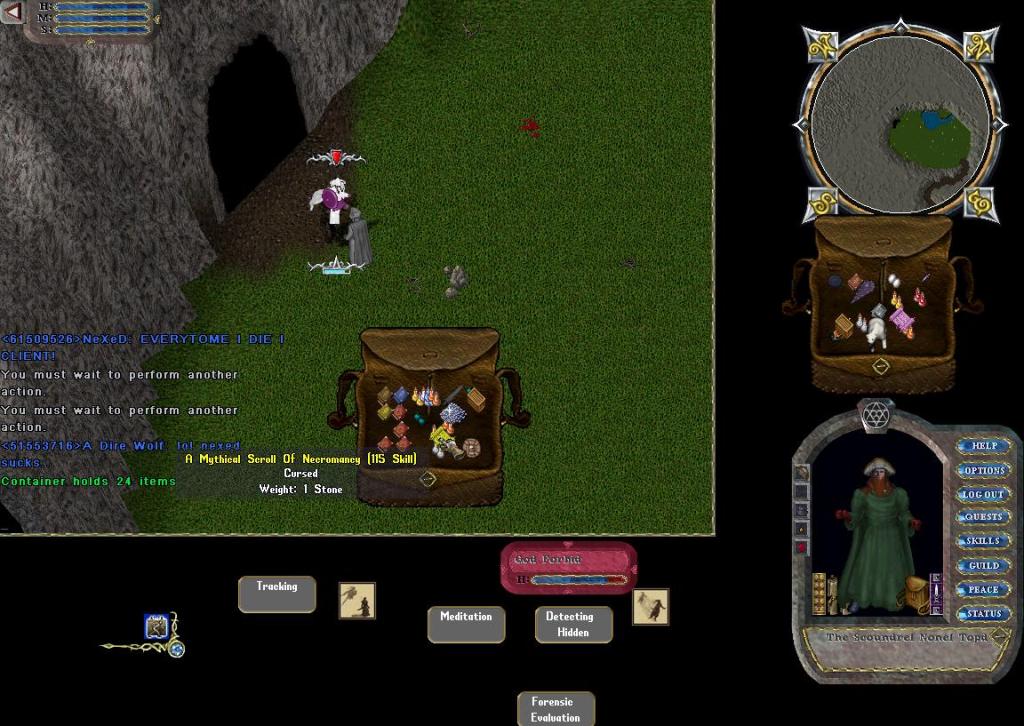 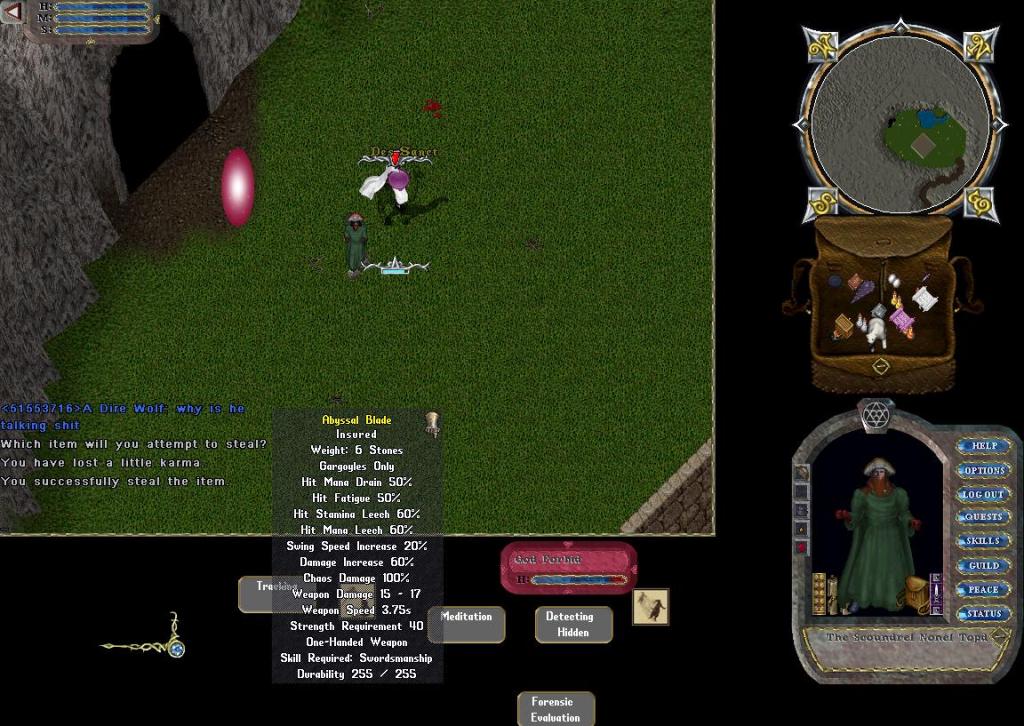 Ruuun! But, never forget to tease. 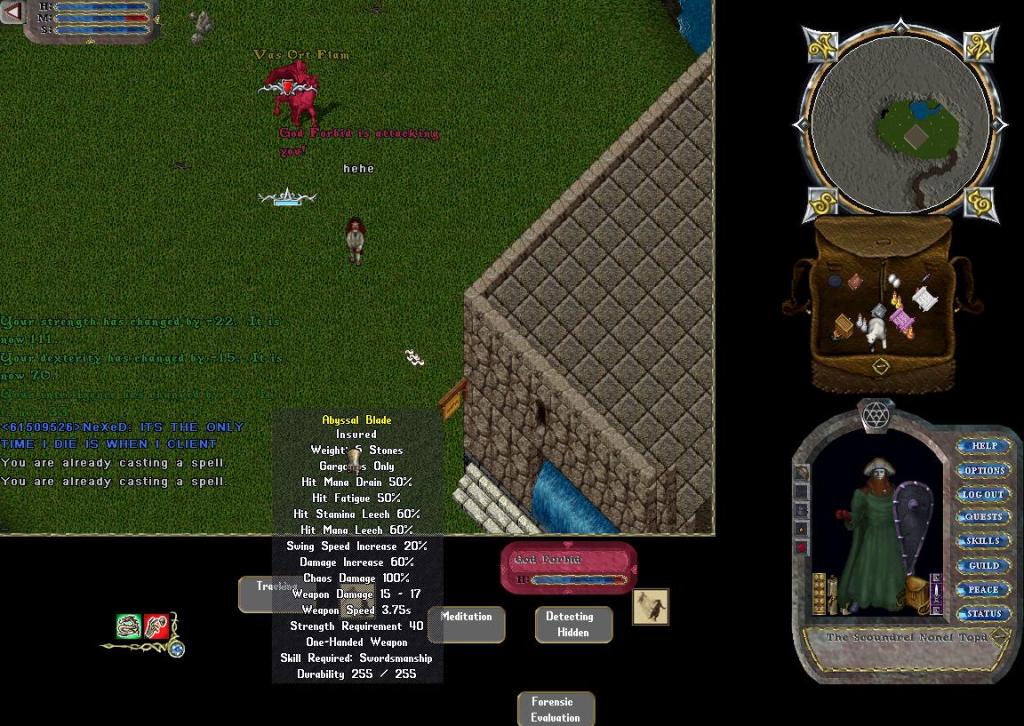 Time to bank my goodies, and head back! Back to where I last saw the Harrower, that is. No red TB in sight, aww. But even better! Oranges! I like oranges (enemy factioners), because when I stealz their shinies they actually try to kill me. 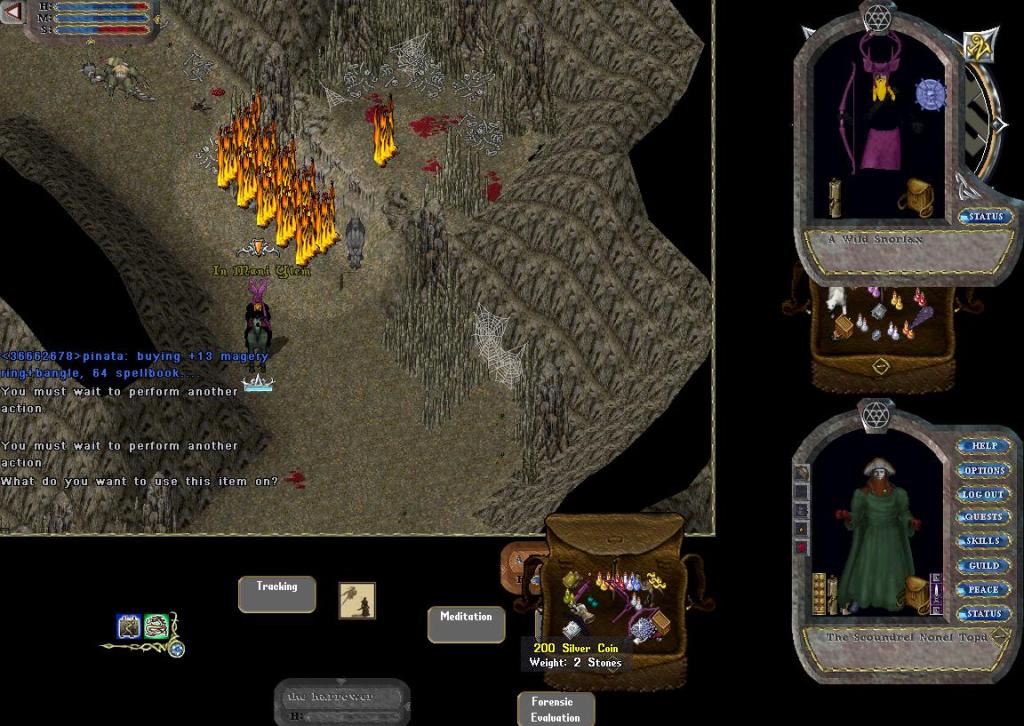 Crap, he saw me... I dodge the conflag and get a snoop off. 200 silver...hmm. This one must have killed most of those MM all by himself! 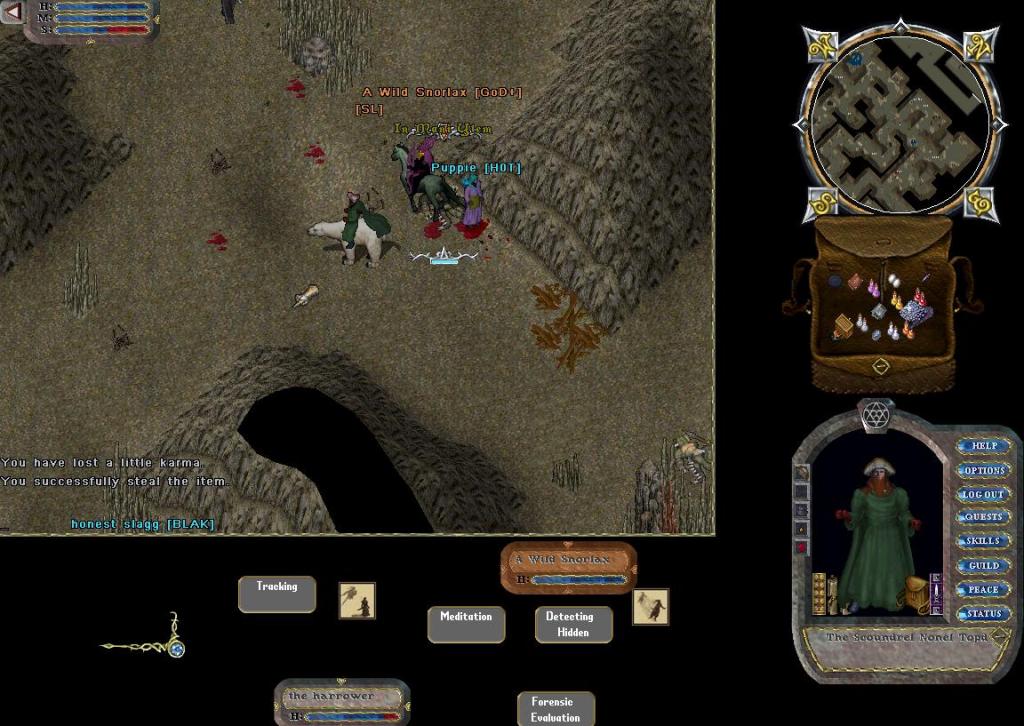 I couldn't just let him run around PvP'ing with all that there fancy coinage! I decided to hold it for him. Time to move up, and see who else is about.

Ahh, there's a bunch of these SL now. Fun. I steal some silver from one, round a corner, and there's a damn gargoyle ready for the dismount. 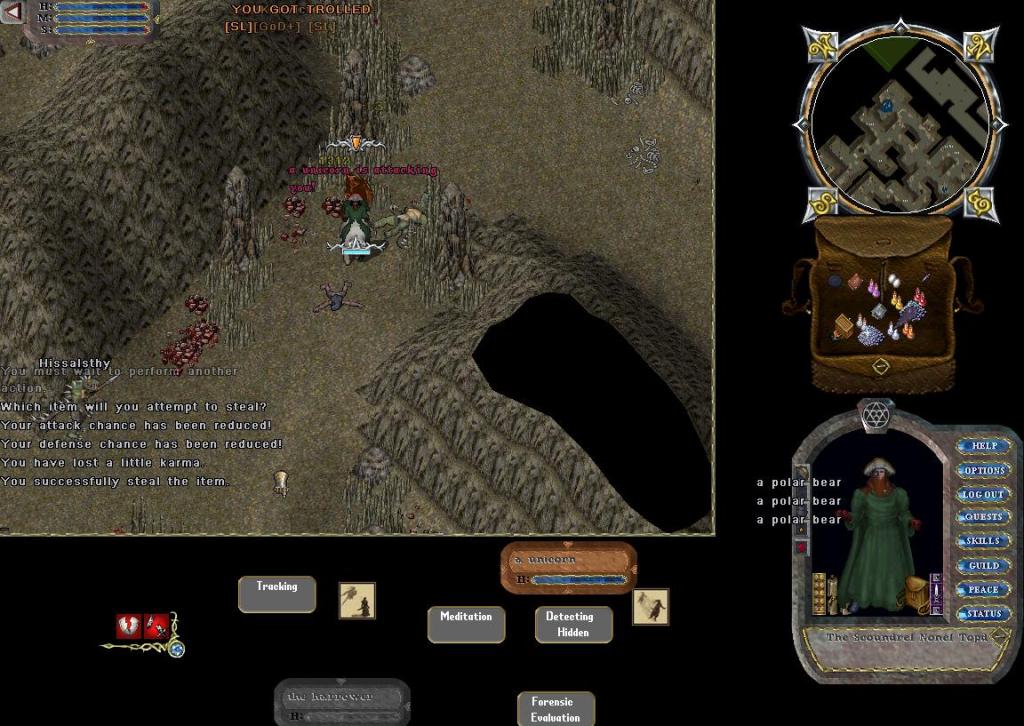 Yipe! I'm being ganked, I'm on foot, I better pull out some tricks. Lots of archers, drop them mirror images Nonel! AoE's, ack, dodge that conflag! In retrospect, I should have reequipped my shield. The 40 parry skill I have wasn't about to help much, but it would have put me above the 50's in a resist or two... ah well. I'm safe. 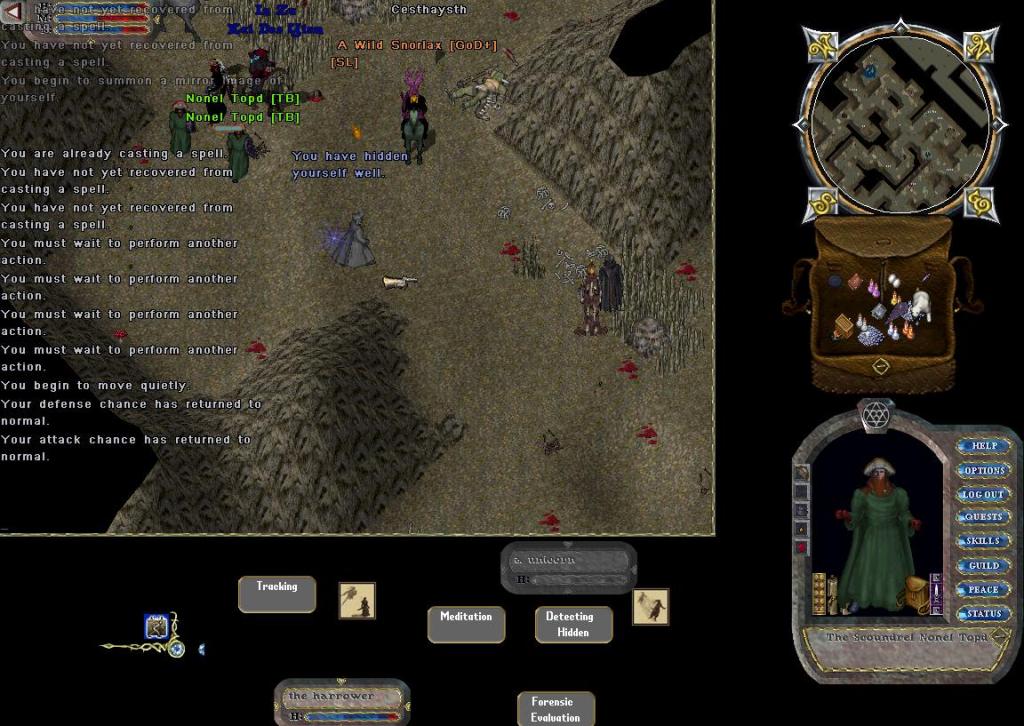 I retreat for a bit. Get my mana back. Heading back in, I am surprised this time to see a Minax. Sheesh, how many factions are coming out? Like everyone else, might as well pop that pack of his... 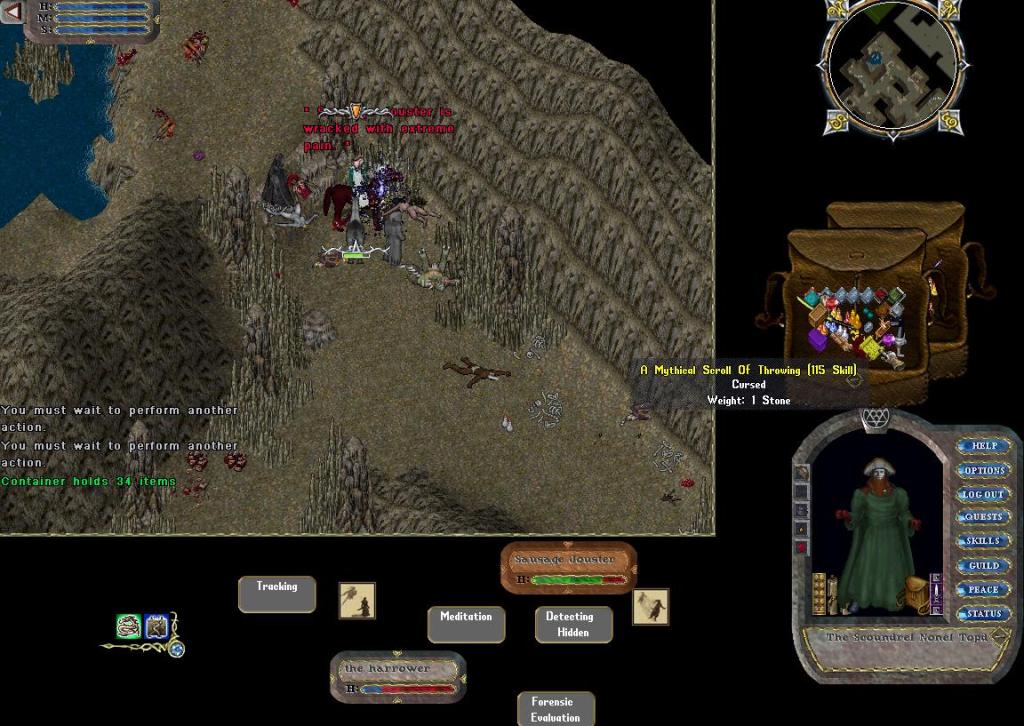 Throwing? Probably not worth much, but I never did care about gold much. Might as well... 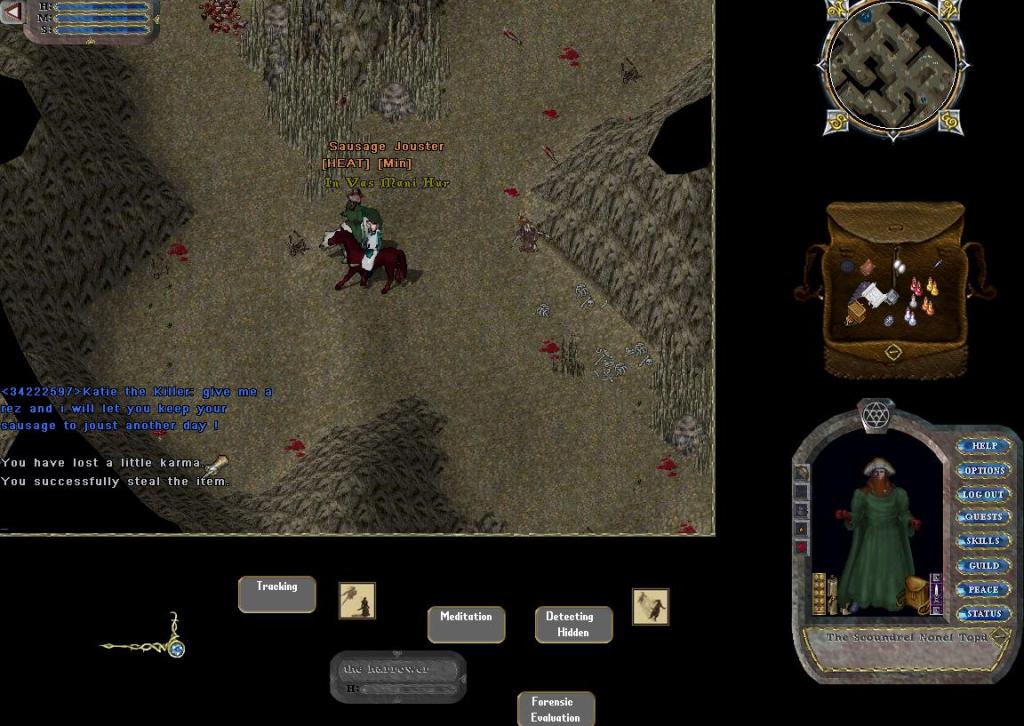 ...take it. This is getting boring. I wonder where all those reds went, they were fun. Ah hah! Found 'em! Or maybe they found me... yikes! 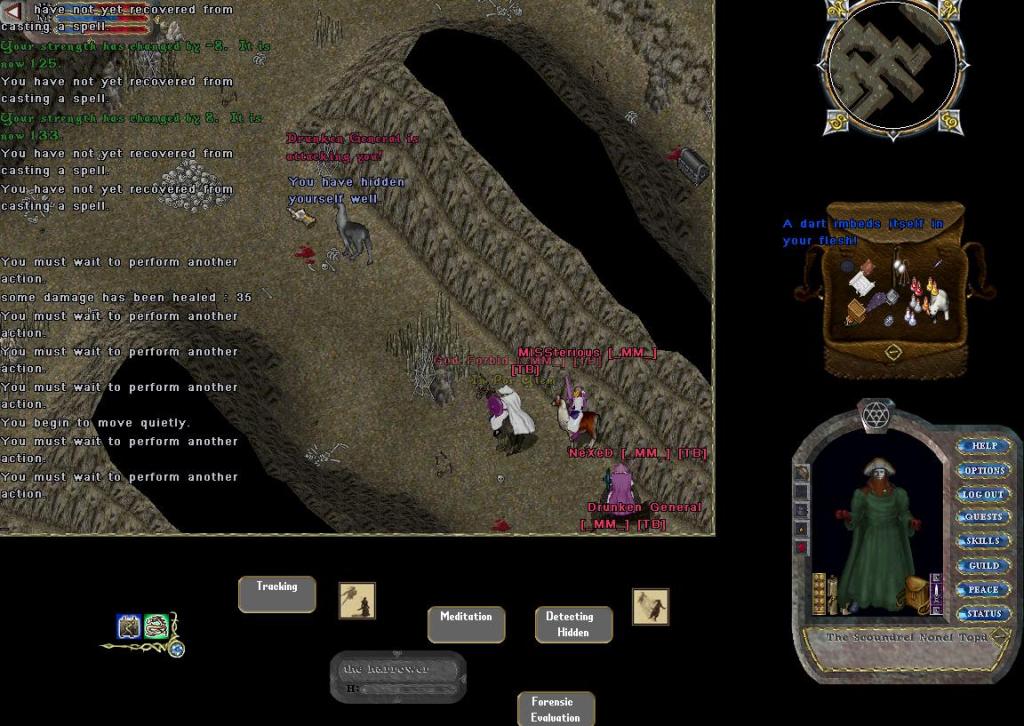 Ouch. They hurt the llama.

But he lives to steal another day!

I'm going to follow them outside and screw with them some more... 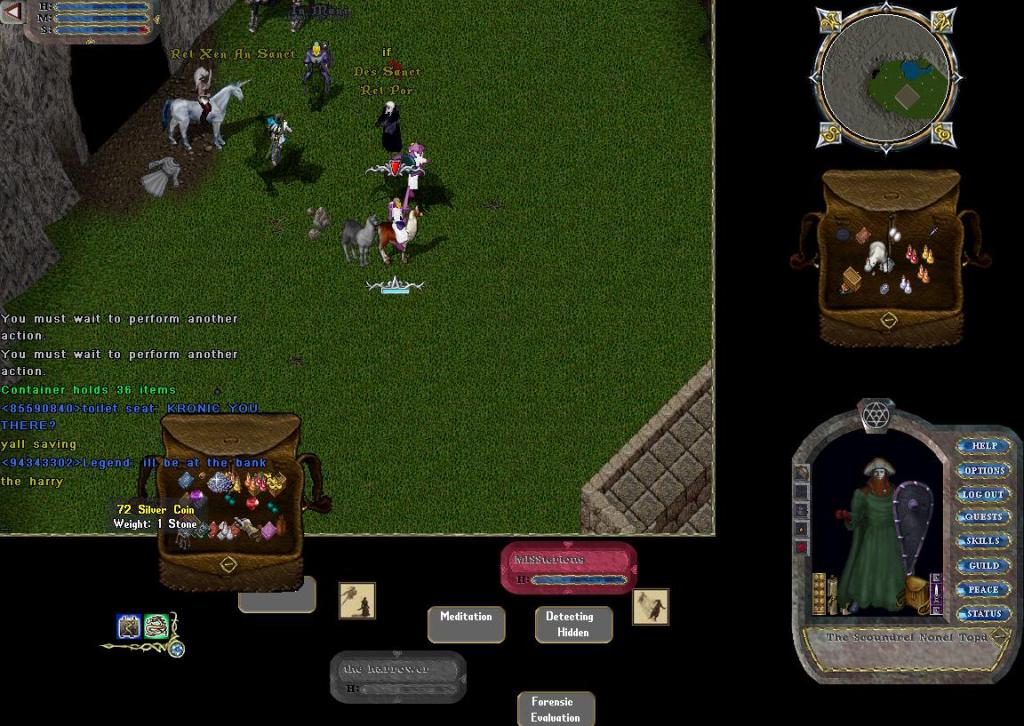 Oh yeah, that silver is mine now.

Ah, shoot. What have I got myself into!? I never even trained this character...hope I get out of this one. 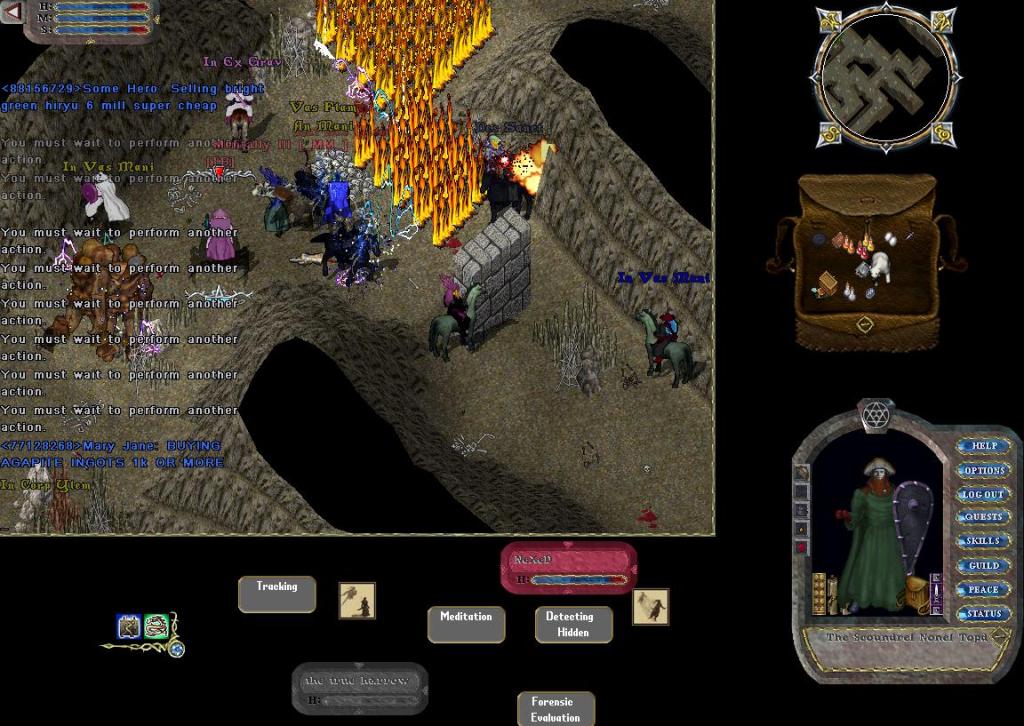 I do. But not everyone does.

The TB are eventually pushed out. Or killed. Or whatever. Either way, the SL have worked the Harrower to its true form. At this point I've stopped caring about stat scrolls, and am in it for the fun. What's more fun than stealing shiney silver from a group of SL mages ready to gank? 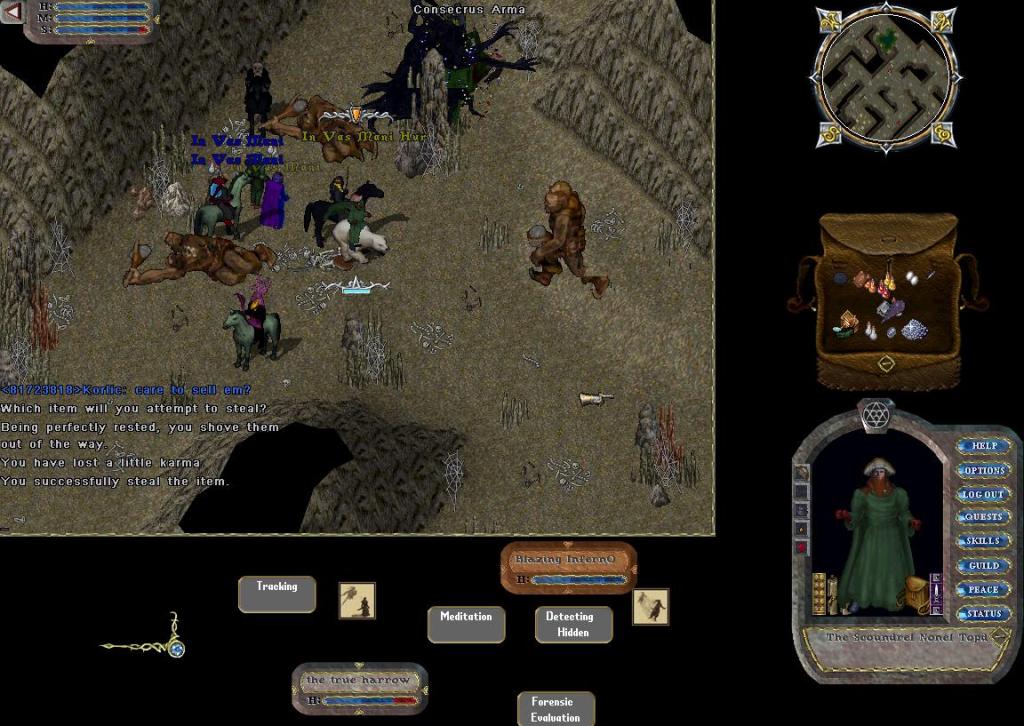 Two give chase, they even manage to get me on track. I have to give it to these SL, they are much more skilled than the MM guys I was stealing from. One stays on me, dropping an e-field behind him while his partner runs around to head me off with a 2nd e-field. Tracked and trapped.... Oh, no wait, I have shadow jump. Har har har.

Back to the bank. Maybe this time I'll head through Fire, again, to get back. Ah hah! A CoM working the spawn! All 4 factions have made it to Despise. I follow this one, Shaylee, for a few minutes, waiting for that item count in their pack to go up 1. And it does. Time to snoop.

Guess what I did? 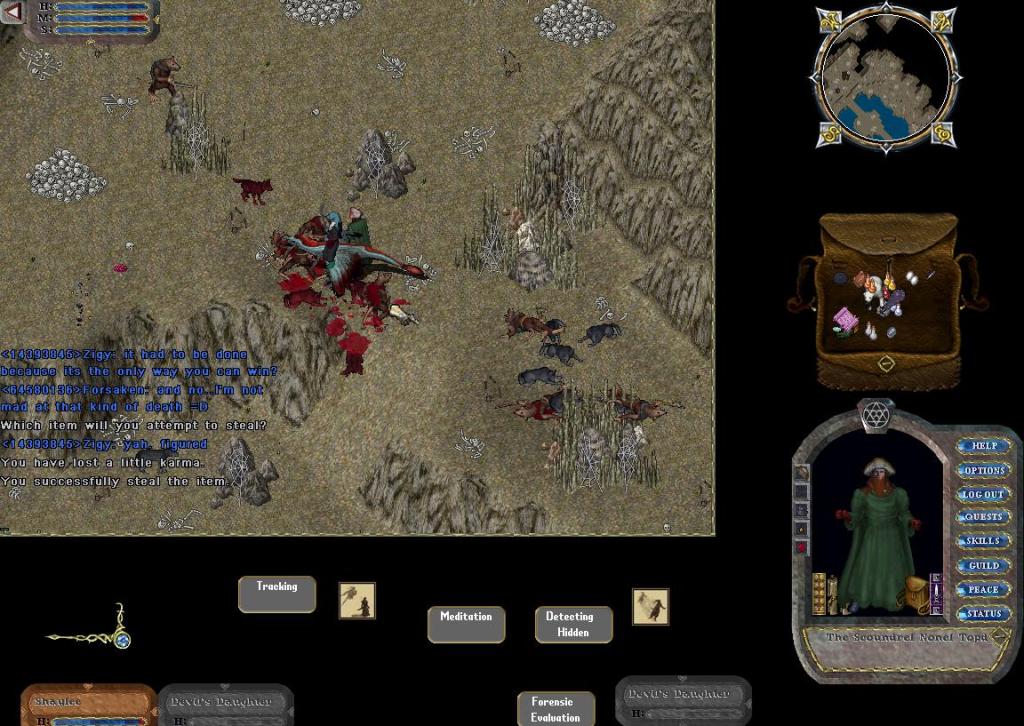 Soon after taking it, I hear it yelled in global chat that the Harry was killed. The SL go running by, I manage to open one's pack and get a stat scroll on last target... but alas, I simply wasn't prepared and able to give chase. They get away, and my original desire for a stat scroll (as this character hasn't had one to eat, yet) goes unfulfilled.

There was one steal of considerable worth, off one of the TB reds, which I failed to snap a pic of. So it shall go unmentioned.

But I gots lots of shinies nonetheless!