I was at fel skara bank years ago. I convinced a guy named Clef to unbless his arcane shield, and then stole it. That is when Bandit, a friend/guildmember of mine walks up. Seeing the shield uninsured and equipped on me, he says, "When'd you get that arcane?" I laughed and said, "About 5 seconds ago." Clef was pissed, needless to say (keep in mind this was years ago when arcanes were worth 10mil or more). I told him I'd make a deal with him. I told him to remove his voice of the fallen king, place it in his backpack uninsured, then run from me around the bank twice...if he still had it afterwards, I'd return the arcane to him. At first, he tries to trick me by placing it in his pack insured (I had him snooped from a good distance without him knowing). I had the voice targetted. He finally mans-up, and places it in his pack uninsured. I steal it just as it hits his pack. He says, "Ok, ready," just as I say, "Done." Me and Bandit laugh, then I notice the voice vanish from my pack. I quickly steal it back from Bandit and toss it in the bank. He was jokingly stealing it, so it was np (at least to my knowledge he was joking, lol). So we laughed, and Clef was out 2 arti's.

Do I think you're Bandit? Ehhhh, maybe. But I won't push the subject in case you're trying to keep it a secret. I mean, it is possible that the voice double-steal could've happened twice. Very likely, actually. 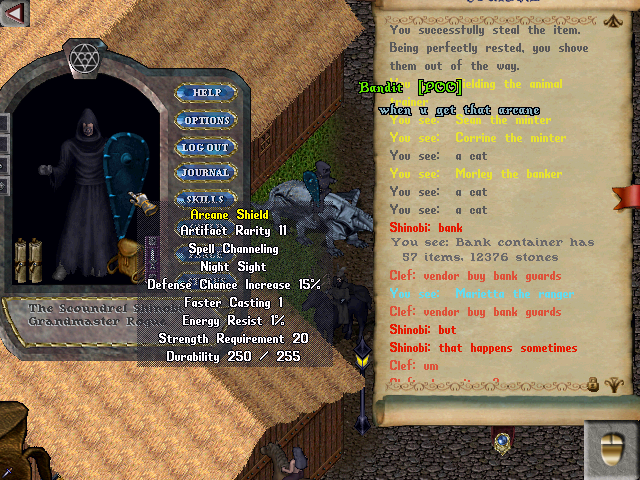 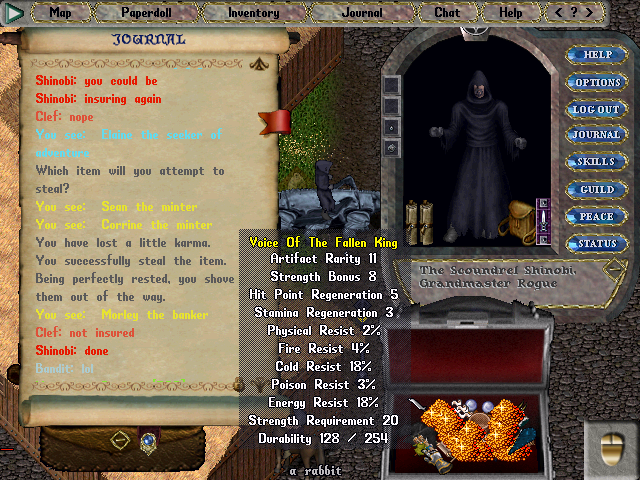 Notice in the second pic, the journal tab is far up. This was taken right after i banked it after having to steal it back from your sneaky ass lol. The pics aren't too entertaining. For some reason, back then i took pics with my paperdoll open, not sure why...all it did was clutter the screen and block the view. Oh well. Memories...eh?