First, let me start off by saying that we do not have pics of this steal due to the fact that our brains were having to run at 100 miles/second. I think that with me and Oblivion's stealing history, you can just take our word for it, lol.

I was chilling at Luna bank, looking for the next victim of a Guild and Steal. I see Deedlit spamming that she was selling Arch Demon Statue. I had heard that this was an extremely rare, and expensive, SA item. It is a huge statue of a demon that can be locked down in your house. I had been hoping to get the chance to steal one of these.

I tell her that our guild is a tamers' guild, because she was a tamer. She agrees to join...well that was easy. I ask to see the statue. She shows it to me in the trade window, and it is uninsured. This item is so large, that inside of the trade window it gets cut off, preventing you from seeing the full statue. I ask if she'll lock it down in her house for me to see it in its full glory. Unfortunately, she had to log off immediately to go to work, and said she would be back online in 3 hours. I said, "That's cool," and she logged off. I then went and treated myself to a Snickers Ice Cream Bar and a Big Gulp.

After enjoying my delicious snack, and watching the end of Pirates of the Caribbean, i get back on UO about 2 hours later. I see that she is already online, and i ask her to show me the statue. She goes to the top of Luna bank, and asks me to meet her. I said, "I'll be right there, i'm looking for something at my house, one sec." Little did she know, i was already snooping her. She said she had it in a pouch, which allowed the full statue to be seen. I see a pouch, but "0 items, 0 stones". WTF? She suddenly recalls out of Luna, and then i hear in guild chat, "OMG, it was stolen." I tell her exactly what i was thinking..."That's impossible." I hadn't stolen it, she didn't go to Felucca...what happened? I hadn't seen any thieves from the guild around the area, so they couldn't have stolen it...could they?

Let's rewind to a few moments before i got back on the computer. I'm taking my first bite into my delicious Snickers Ice Cream Bar. Little did i know, Oblivion was about. While i was being a fat ass, Oblivion was hard at work tying up my loose ends. Deedlit was on her computer in her office in Hong Kong (she lives in Hong Kong, btw). She had logged on to show me the statue.

After logging back on in Luna, she gated to the Tram Vesper bank to make a deal with someone. Oblivion, seeing her as "green" because he is in my alliance (and knowing my plan because i had told him of it before getting off the computer), tailed her to Vesper, and was at her side when she placed the statue into her pouch. The moment it hit her pouch, the bastard stole it from her. She had no clue it was gone, and heads back to Luna to show me the item.

Fast forward to me being dumbfounded. Deedlit and myself head to Vesper to figure things out. I assume it's still in her bank somewhere, and she is just a moron. When i get there i receive a party invite from, of course, Oblivion. Instantly, i want to strangle him. I had set up this perfect steal, and he took it. So, after i calmed down, we decided to split the profits 50/50. That being settled, we set our focus back on Deedlit.

Oblivion decides that i should tell her that the guild will reimburse her for the statue, regardless of how it magically vanished, because guildmates watch out for each other. I let her know that each guildmember will gladly put up 2.5mil, allowing us to easily purchase a new statue for her. She starts to calm down, and gets a little more comfortable with me.

I tell her that the statue must have disappeared in her bank, due to it being too full and the statue too physically large. I convince her to empty her bank entirely, and log off, promising that the statue should appear in her bank as she logs back on. She takes out some advance tokens, and some bandages/other resources. Nothing really worthwhile. Needless to say, when she logged back on, the statue was not there. I ask her what else she has to sell, and she mentions that she has 2 valorite runic hammers and 1 verite runic hammer.

She goes and retrieves them from her house, then banks them at a separate bank from Vesper. After having them banked, she meets us at Vesper. Oblivion is still stealthing nearby, while i am talking with her. We agree that i will buy the 3 hammers for 60mil. I start to show her 25mil+ checks in the trade window, thinking that she will place the hammers in the window before i can finish retrieving the remaining checks. We were hoping that after canceling the trade she wouldn't bank them immediately, allowing us to steal the hammers. Keep in mind, she was 100% convinced that items could not be stolen in Trammel no matter what. I did not have 60mil in checks to show her, so i tell her, "There are some fake valorite runics going around, can you show me the titles on the hammers?" She puts them in the trade window. As i'm about to target one, i disconnect. WTF? This is bull****. I think instantly, "Damnit, i finally crossed the line and was banned."

Fortunately, i log back on. The hammers aren't in her backpack, and Oblivion said that after the trade canceled, she banked them immediately. Well, obviously this plan isn't going to work. We then decide to have her do the sale on a vendor at her house because, "i have too many items in my bank to freely dig around for the checks."

We weren't sure if she was going to gate or have me recall to her house, but we had a plan. When i arrived at her house, i was going to walk off-screen, and have Oblivion bind to me with his brace of binding.

She opens a gate, and i walk in. I say, "OMG, i think i used to live near here!" I run a few screens over, and give Oblivion the go-ahead. He binds to me, and hides. We then walk back to her house, where she already has the vendor set up with the hammers on it.

She has all 3 hammers in a pouch on the vendor, with the pouch set at 60mil. I tell Oblivion that i am going to target the valorite hammer on the right, and for him to target the valorite hammer on the left. Knowing that i don't have 60mil in the bank, i click to purchase the pouch. The vendor says "Shinobi" above his head, and i reply, "Damn, i must not have 60mil. I know for a fact that i can cover 55mil, mind changing the price for me?" She agrees.

We both have her pack open, watching for the pouch to land in it. The second the pouch appears, i rush her and steal mine. At the same time, Oblivion appears out of nowhere and steals the other, then runs off-screen. Almost instantly, the pouch is back on the vendor, but is missing the 2 valorite hammers. When i say that the pouch was in her backpack for literally .1 seconds, i am not exaggerating, lol.

She then says, "Well, you guys did it again, good job." I reply, "Haha, sorry, it's what we do." I hide right there in front of her. However, it isn't over yet. I stealth beside her and open her pack. I target the verite runic hammer, just in case. For some INSANE reason, even though she just saw me hide right in front of her, she removes the verite hammer from the vendor and places it in her backpack. I swipe it. Oblivion arrives back on screen just in time to see me running off screaming, "Weeeeeeeeeeeee." We then recall back to Luna to reflect on the damage we just caused on the other side of the Earth.


At first i was angry with Oblivion for taking my planned steal. But, if i had stolen the Arch Demon Statue, i would have simply booted her from the guild. Because he took it, we ended up with an extra 50mil or so. All in all, i'd say it was a good night, lol. 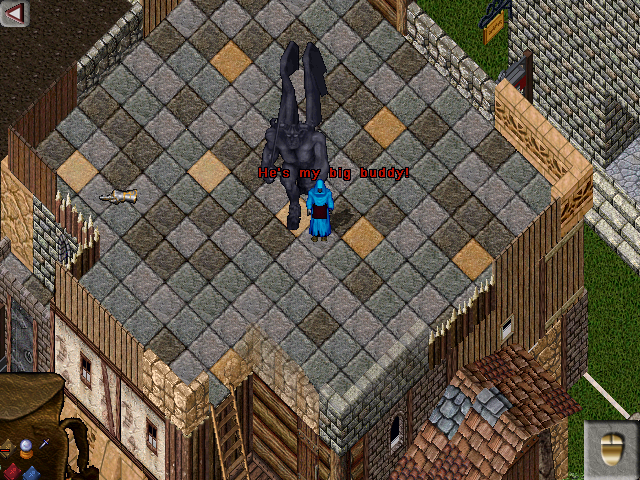