I found a public message posted at several banks throughout the lands.

Very confusing. How could such a feat pass me by? Who is this awesome thief? It's also very disturbing, because it wasn't me... What could he have stolen that warrants a message like that? That has never happened to me... *sulks*

So, decided then and there, I set out on a quest to reinforce my position as the greatest thief. By stealing a whole Christmas of my own AND having the photos to back it up. Take that anonymous competition!

Let's start with Rudolph, no Christmas without a reindeer. And no, he's not dead. Just sleeping. And a bit skinny. He'll recover in no time I'm sure. 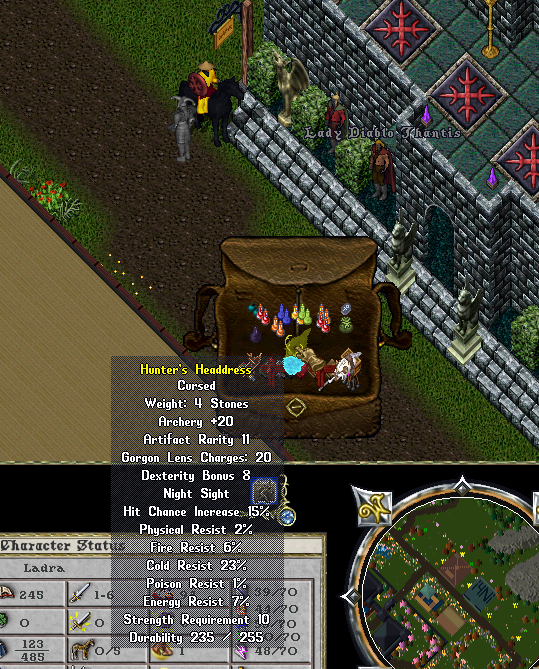 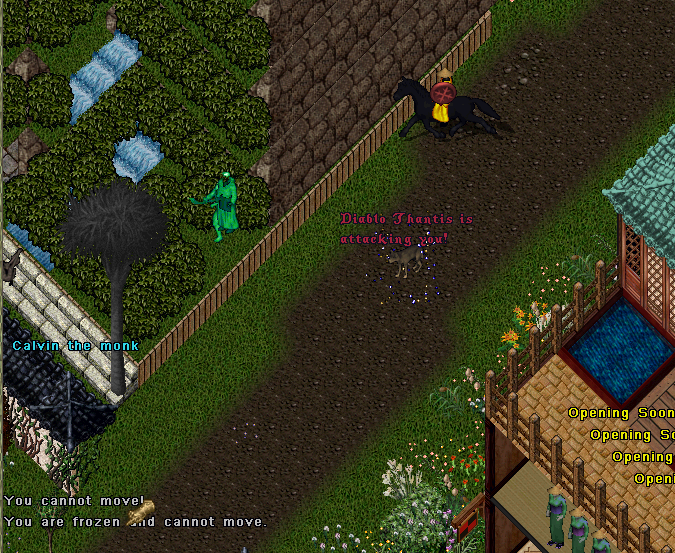 Luckily I make it out ok and the first item is crossed of my list.

Time to look for Santa, and then rob him blind. *grins*

I get distracted... Booze?! Yes please! Is it really Christmas if you're not drunk? Probably not. 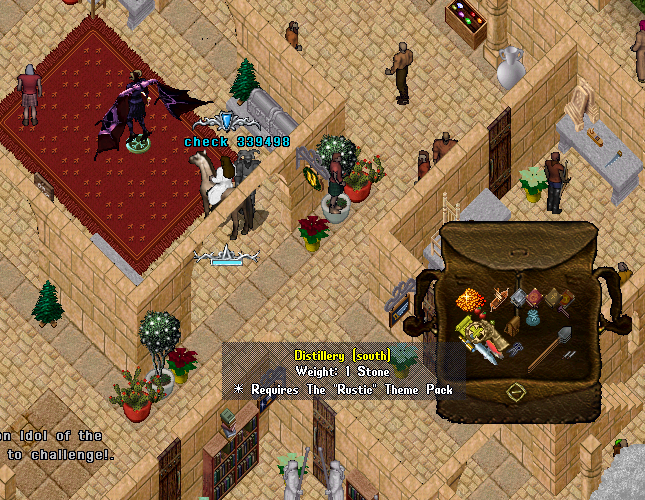 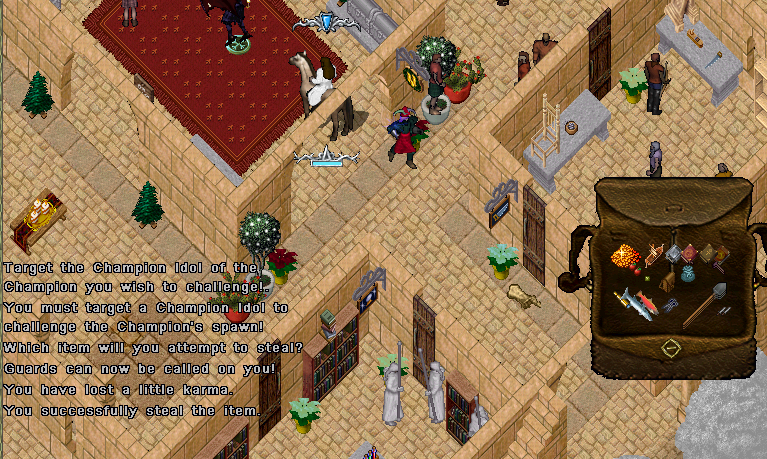 Notice the message about the guards? That is not supposed to happen. If it does it will probably lead to this. 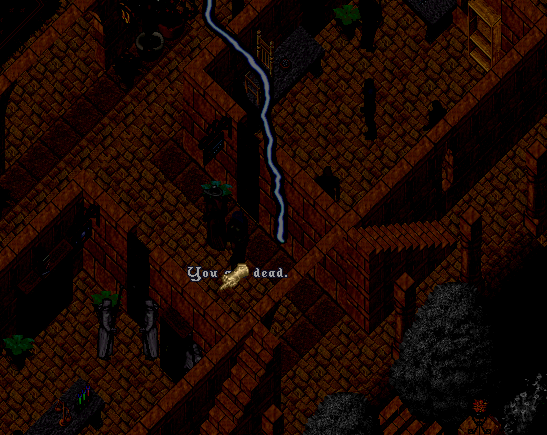 Entering the scene now is the pesky looter Mansbeth. What happened to being able to lay dead on the floor without being bothered?!

Hahahah, he died! How's that for justice? 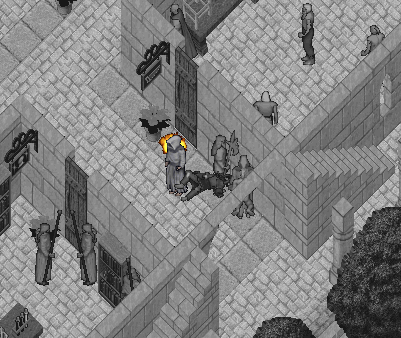 But I lost track of the story. We were looking for Santa, right?

I've heard that one of the few people that knows where that bearded bastard lives is a mage named York. Good thing I know where *he* lives. At first it looks like there's nobody home. But a more thorough search reveals the owner hiding just outside... 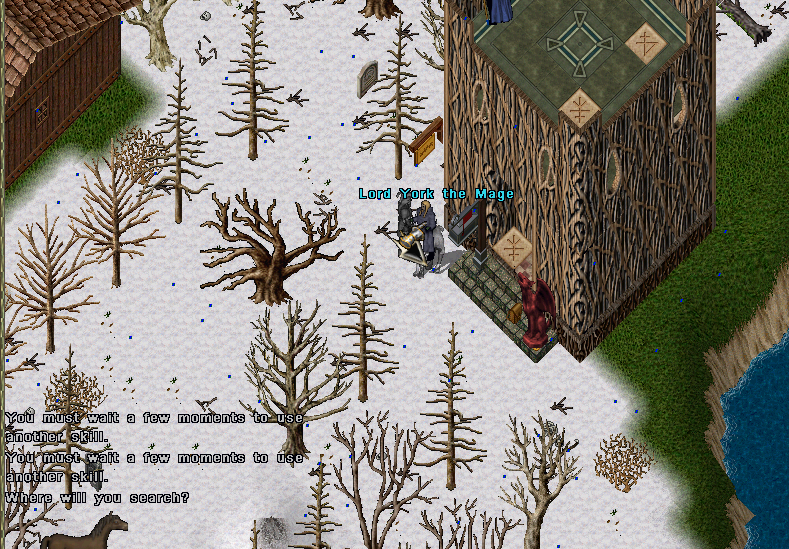 I assume that he will not give up his friends hideout without some serious nagging from me. The plan is to simply jump him, catch him by surprise, tie him up, drag him back to Barter Town, lock him up in the tower and nag, nag, nag until his ears are bleeding. But luck strikes again! Look what's in his backpack.

I'm at least 100% sure this books contain all the information I need in order to locate Santa's hiding place. So I take it. 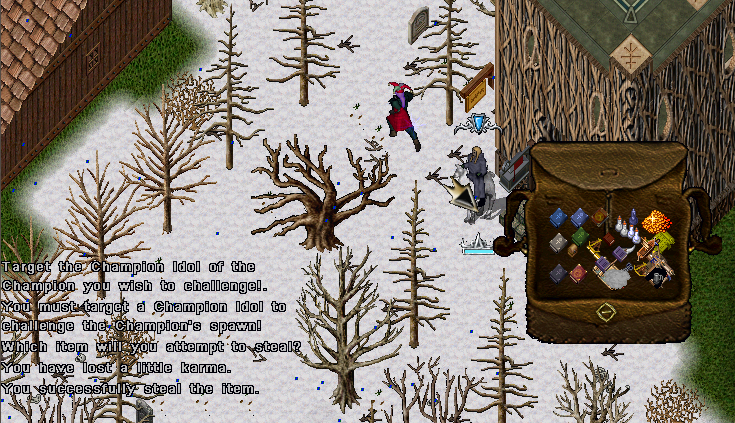 On my way back through Moonglow I notice a party going on. How's this for a combination of a Christmas tree and a cozy fire? 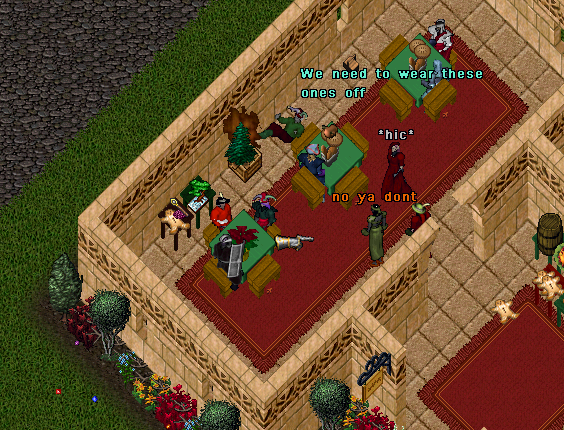 And while we're at it, let's get a nice dead bear to put in front of the fire. It'll be great to pass out on after drinking that whole distillery.

While in Luna, banking my newly found stuff I manage to get all the decorations I need in one single sweep. Just laying on the ground is this motherload. (Ok, ok, "just laying there" might not be true. Dropped on the floor for a split second before I scooped it up in front of a bewildered crowd is closer to the truth.) Anyway, I love finding stuff on the floor. No risk of being bothered by those guards. 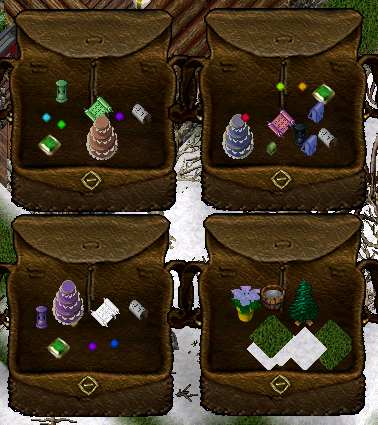 One thing that I think would really stand out as sinister would be if I could steal some poor kids wish list. Sadly (for me) I could not find a kid. So Delores list will have to do. 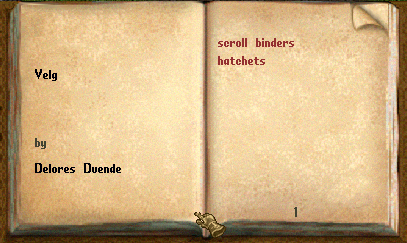 That is the most depressing list I have ever seen!

Me? I wish for toys.

I think my quest is done. I feel like this is a complete Christmas stolen. And there is no need to pay Santa a visit. Got all the toys I want, for now. But you should sleep with one eye open Santa. I still have the book with directions to where you live. And I will, mark my words, pay you a visit some day.