Another long night in some damp cave. Rock for a pillow. Small fire for warmth, but hardly enough as it would attract lurking beasts. Nice chicken roasting and a good book telling of some other misadventures. Sure, there are safer places, an inn, a tavern, but too many others around wanting to get their hands on my valuables. ...Who am I kidding, I wandered around drunk half the night and somehow I ended up here.

How to begin the day. Training to be a super thief has proven to be rather difficult. Not that I am not up for the challenge. I make my way through the pit of the cave and end up in the Star Room. I think about it for a minute but then decide not to spend an hour or more waiting for someone to pop out only to miss a chance... And besides, are champs even done anymore?

I hop into Luna and peek around there. Great a targ...Damn, its Shalimar. And even though I have low standards, she did just hand over some scrolls and skill training information. Ill let her be for now. She may prove more useful in the future. Luckly though there is a gate and I pop in to see whats there.

I come through the other side and the guy is already in his house and he hides. I track a couple times and nothing...Must have logged out. I wait a couple minutes and he doesn't show so I decide to take a walk around the area looking for targets. Perhaps in some cave somewhere, hiding at their house, anyone would be great. I come up to the Chaos shrine and pay my respects and continue on my journey. Skills are just rolling in, I'm fairly adept and my ninja abilities and I can stealth a couple times before it fails. My confidence is growing. Now if only I can find a target! 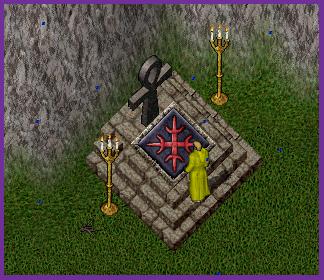 I find myself back in Brittain and make my way to the moongate. Tel Mur it is. I head up to the soul forge, just in case. Noone, damn!

My super bionic hearing never fails. So I click on tracking and I see a mark. Detect Hidden, and what luck, out on the first try. Alien Technology. Nice name...I open his pack to find some ingredients, of course that's what to be expected here. Good enough for me since its been such a long walk.

Yoink! Ill have that. Thank you very much.

He stands there. In awe, I assume. But none the less no interaction. Pity. I decide to bank my item before I try for a second as I would hate to lose it all. I head back and he is gone. I track and nothing. Couple more tries... too bad. I head up to the queens forge to find Lord Dog standing there making some sort of whatchamacall it. I look in to find a couple 105 scrolls. Lets see what else are in these lower packs. He casts a gate before I can properly search him so I make an attempt at one of the scrolls. Missed my chance.

I follow him through the gate to his house and decide for a little interaction. He decides rather then give up his precious loot he will tell me where to find others to steal from. Of course! The Underworld and the Abyss.

He pays his respect to thieves and I let him go, I have bigger fish to catch.