The night was young and I was starting to have minor withdraws from not having a good heist in a few days. I search around for some time looking for the hot spots on the shard and have yet to find them. I found a rune book library at Yew gate which seems to be fairly active so I popped a couple times into random gates opened only to be ditched. (Personal note, need a mount or work up ninja to run faster.)

I explored a couple random dungeons and never found a soul. How discouraging. How am I to make a name for myself as one of the most renowned thieves when there is noone to thieve from? An hour of wondering and my hoped about diminished I decide to go work some skills. World renowned does not happen with skills in the 50-70's. Thats mere petty thug who dies because of constant fail.

I decide to work detect hidden for a bit and a good place to do that is there at Vesper Bank. I stealth into town and what's this sound I hear? Flushed toilet? No. Broken sprinker? Can't be. That is surly the sound of someone making potions. Lets see how well this tracking skill works.

LanCaster? Pennsylvania or California? In any case I may have found what I have been longing for. A Victim. 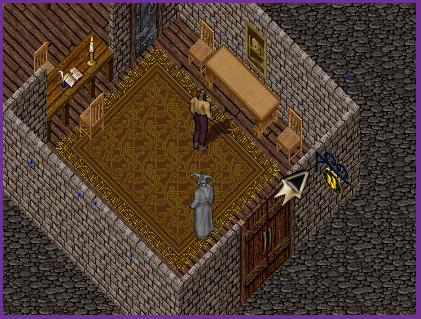 So I start with the detect hidden. After all that is the skill I am here to train. "You can see nothing hidden there." What? I can hear him, in fact Im sitting on top of him, and I can smell him he's that foul!

Oh for the love of...I feel like such a failure at life. There is no way I'm letting this fella get away. 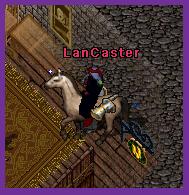 Sucess! I can continue life after all. I am one step closer to being the all feared super ninja thief.

Now, I have found a target and pulled him from the shadows. He moves out of reach and I come to my next problem. Do I attempt and stealth in, (I use the word stealth in the most loosest of all its meaning as I walk about as quiet as a two year old at church...Yeah bad analogy, get over it.) Any how, I decide to take another approach. If I run in and steal he will chase me, Ill be dead and thus ending my story without the happily ever after.

Good evening, I am Kros, Super ninja thief in training. Today is your lucky day. Dont mind me none, Im just here to steal form you! 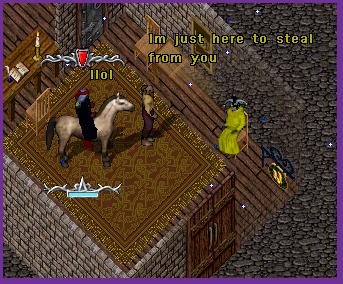 Lol?
LOL?!?
What nerve. Did the Joker ever taunt Batman like that? Lex Luther to Superman? Oh wait, they did. So which side am I the good or bad? (Second personal note, Determine if I am good or evil and ponder the meaning of it all).

So now, I have found my target, pulled him from the shadows and let him know my intent.

He informs me that he has nothing but a fishing pole. I let him know that I have super bionic hearing and know that he is lying, and that I know he has a mix of potions on him. He agrees and apologizes for the mistake. I let him know that his sincerity in his mistake will allow him to keep his potions for now. I should take from him his fishing pole. I naturally wanted a trophy for my first steal and potions would just end up in someone else's pack.

I reach my hands into his pack and....

"You have FAILED to steal the item"
FAILED!!!!

I hang my head in shame. How is a super ninja thief supposed to instill fear in the masses when he cant even steal a flippin fishing pole from an unarmed man willing to let it be taken. I sigh and look at the item again. 8 stones. Now hurt pride is taken over by ignorance and noobishness. With my apprentice skill level there is no way I could possibly take such a fabulous item.

Not to leave empty handed. I mean would Jesse James allow a train conductor keep the loot if they were so willing and understanding? Of course not, and neither would I. So I decided to take a stab at the bottles in his pack.

I tell Mr. LanCaster that I would in fact "let" him keep his fishing pole and would take from him his bottles. Again the dreaded taunt from him "LOL." (Third personal note: Get ninja stars with deadly poison and instill fear through poison to all those that "LOL" me). So I crack my knuckles and wiggle my fingers a couple times then reach in.

Ah, all the failures leading up to this moment made it even sweeter then I could imagine. Granted there is no value on a hand full of bottles. But the first theft always has special place. These bottles shal be stowed away safely in my bank until a suitable place can be found to put them on display. I mean, seriously, there will be a shrine built in my honor one day, and the value of the first five bottles will be set near priceless.

I then congratulated my mark and thanked him for his generosity and we parted ways. 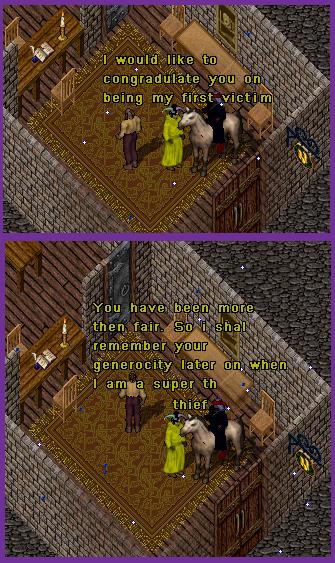 It only gets better from here.