It started as just a regular day on Siege Perilous… I was collecting some taxes from fiendish scoundrels when I came across Chewy.

Chewy is a scoundrel of the highest order, he is known for his anti-social behavior and general lack of respect for the law.

For some reason, Chewy believed he was going to charge me an exorbitant price for some jewelry I did not ask for but…. I decided to play along and see what would come of his tomfoolery. -_^

I notice he is carrying an expensive bow and determined it would have to serve a down payment towards his debt to the Kingdom. After all, the guards I provide the realm are expensive, and someone has to pay for it.

Let’s be honest, if Chewy’s going to hide behind my town guards all the time, he should pay. 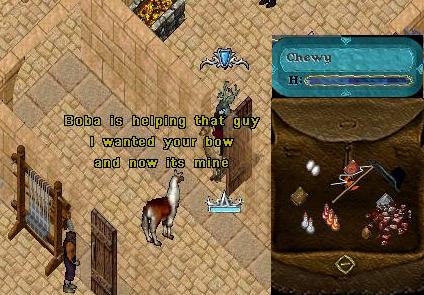 Chewy realized his folly in attempting to rip off the King of Thieves fled in fear of my amazing largesse.

My opinion of myself is affirmed. Victory can only bring more victory right? Nothing can go wrong because I am amazing and my amazingness can never be stopped right?

Of course… And that’s why I wandered around and decided to investigate a suspicious man named “Element” that had a NEW guild tag.

I attempt to inform “Element” of his violation of Siege Tax laws. A Failure to pay me money not to rob him charge. He ignored me….

Another criminal to punish… A King’s work is never done….
::GRIN::
It’s a good thing that when you do what you love, money follows. 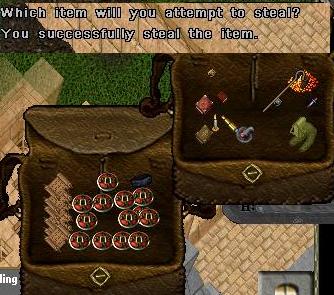 I steal and steal and start taking as much as I can from him. I call upon my utter greatness to steal 8 pieces of high end imbued jewelry, a decorative personal bless deed, and a new player starter kit that is specific to “Element.”

The fiend began to insist I return his property..
I decided not to play coy with my usual “you mean my property” spiel and instead decide that I would TRADE back his extremely valuable items for one of his Legacy Tokens.

He repeatedly changed his mind between wanting all of MY property back or just the deeds that I decide are epic to have stolen. 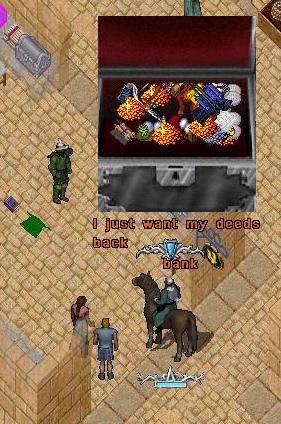 The blue deed is the bless deed and the blaze one is a new player starter kit. The starter kit offers some really extreme benefits but only to him.

He played the pity card but since he was carrying a ransom fit for me in tokens on his person, I was decidedly not receptive.

Boo hoo! You lost some valuables but you have a fortune in things that “magically” can’t be stolen… 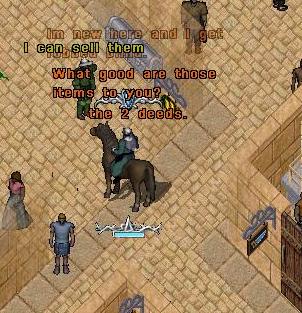 And then “Element” attempted to convince me his items were valueless to me. The same way everyone claims anything I’ve ever stolen attempts to do. It’s amazing how after a decade of theft, people haven’t learned new ways to respond to one so glorious as I.

Can you guess the next thing he claimed? GMs will take back the items and punish me for being awesome. Meanwhile, my adoring citizens attempt to persuade this “NEW” guy he hasn’t lost much at all..

And then the standard attempt to scam me by offering a “code” for his items back. It was quite amusing but I was forced to insist payment come in the form of a Legacy token.

In the end… Everyone pays their taxes. Everyone owes the King. 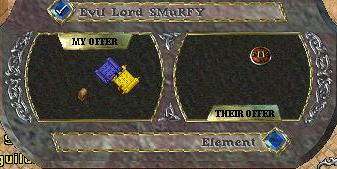 Unfortunately, “Element” decided to follow our happy transaction with some unfriendly comments about his liege.

I was forced to punish him again…

Next Time, Pay Your Taxes and try to restrain your urges to blurt out random insults… You’ll end up with more property by obeying the King.
::GRIN::