Episode 0267: The Most Gratifying Steal

I hate this guy, a lot; and it takes something to make me really despise someone. He's always been a complete idiot and acts like he is "The King of UO" when I see him on Atlantic. I found out that he does not like to use vendors to sell his "l33t" items, but locks down all of his weapons and armor in his Fel house and gates people there to take a look. As I found this out, I decided to take advantage.

He gates me there, and acts all "buddy buddy" with me because I told him that I have 100s of Million in gold to spend. I'm taking a look at his collection locked down in boxes, and saw this one (along with a couple others) uninsured. I asked him how much, and he stated that it was 30-40 million....perfect.

So he had some armor that was locked down; I told him I would look at that real quick.....as soon as he unlocked the box and put it to his backpack: 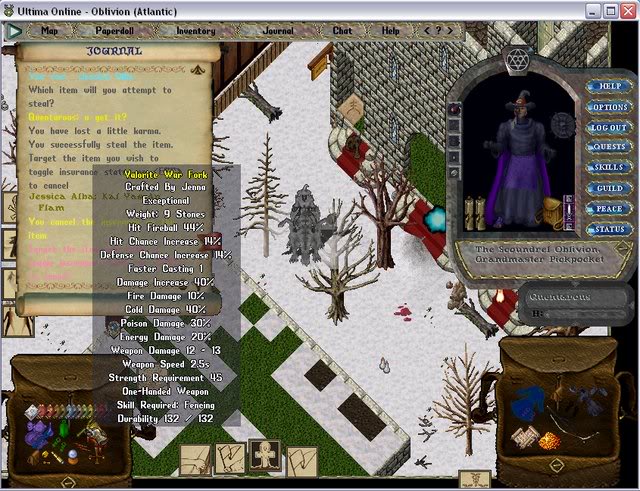 He did not notice, and I ended up stealing another fork -- 46% Fireball, 30% SSI, 50% DI, UBWS....another nice token. I turned grey on that one for whatever reason. One of his 'red' friends were there and was ready to go to town after I was the incantation 'In Sar'....I used the 'Leave House' option and jetted out there before they knew what hit them. (This is where I took the picture)

Following this, I received the comments from him on how I am a "scammer" when I just used a skill in UO and outsmarted him. After listening to him countlessly trying to say that I was a "scammer" it is time to make one thing known: 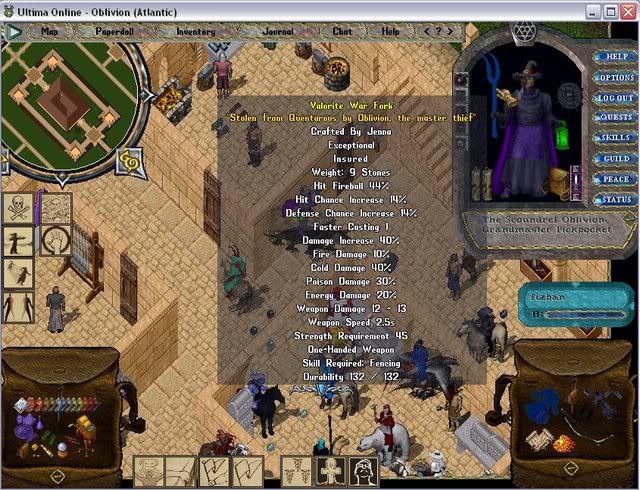 Quentarous --- how does it feel, buddy?