Atlantic: Wild Fire (aka Tweedle Dumb from !LNR)
Item Stolen: Treatise on Alchemy: Owned by No One

I saw this for sale at Luna, and I wanted it since I don't really see them all the time and I actually use this talisman. Wild Fire was willing to put this up on a vendor at her house, but was actually smart and decided to hide when putting the item on. So I said "Hey, I'm going to get my red real quick with the money, brb"

I ended up having a rune nearby his house so I recalled there and quickly stealthed over to her house. I had my buddy bring his red there and said that he couldn't afford it, thought I had more money.

As so as he recalled away, Wild Fire came down, and took it off the vendor: 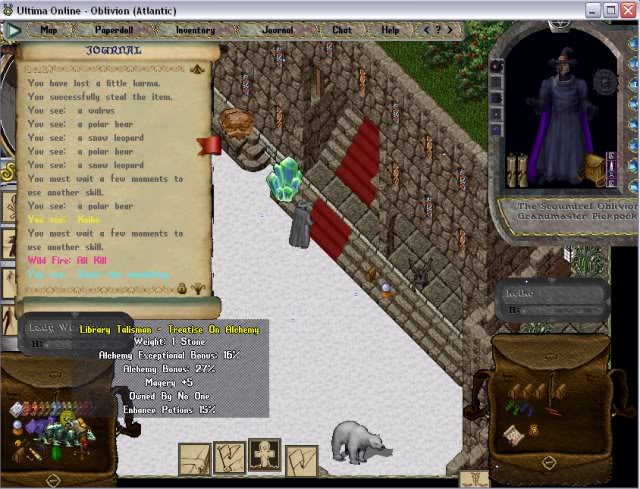 So I was laughing about it, she tried killing me with her Cu Sidhe....but I was quick enough to go into Llama form, run and hide. So I decided to stealth back to take the screen shot and I was posting it on the forum. As I was doing that and put it up on Photobucket. I came back as a ghost.

Tweedle Dumb was laughing at me calling me a "noob" and what not.

Here is my rebuttal:

I think I'll take the 5k loss in insurance for a talisman that is worth over 10 million....and states that it's owned now by 'Oblivion' not anyone else.