During my extended period of procrastination, I decided to roam the streets of Luna in search of some folk that looked like they could use a bit less weight in their bags.

Sure enough the sound of clashing swords were heard as i headed east past the moongate.

After failing numerous times on targets that wouldn't seem to sit still, my patience had finally paid off when the combatants stopped to loot the corpse of their victim.

I peered into one of their packs and quickly made off with the first unblessed item that i came across.

After distancing myself from the group i examined the fruits of my labor.

While inspecting the bags of people stopped in at the bank i hear the sound of a moongate appear from upstairs.

I walk upstairs and sure enough there is a red moongate staring back at me. I step through it wondering what awaits me...

As I came out the other side of the portal I glanced up the stairs of a nearby house to see some sort of transgendered witch doctor glaring angrily at me. I felt my body stiffen in shock as it drew near. Fortunately i was able to stealth before it was too late.

While i pulled my self together I watched as the creature scattered random items along its front yard. Or perhaps is was planning some sort of ritual... I had to act fast.

The creature had a deep pack, but eventually I came across some nice shoulder armor I considered worthy of my final steal. 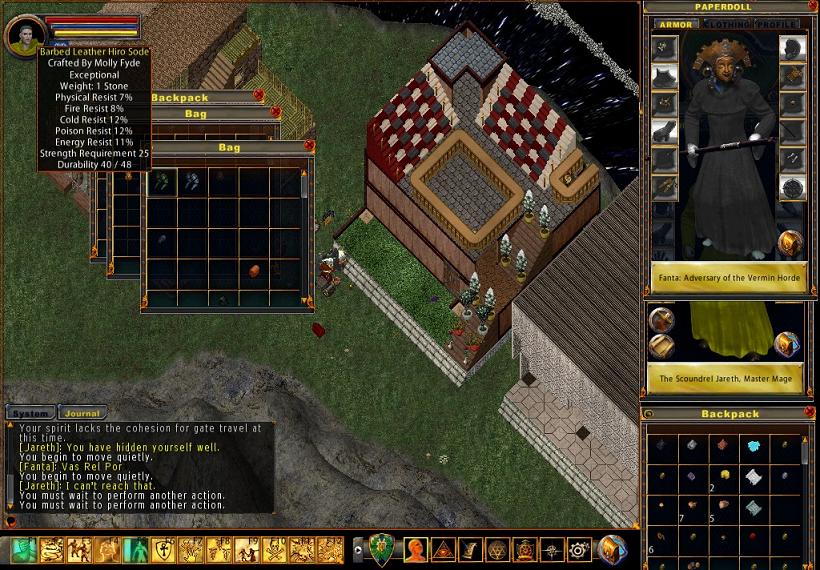 I successfully removed the item from it's pack, however my bright yellow robe must have caught the creature's eye. Luckily I was able to get off an invisibility spell instead of getting incinerated.

A wave of relief washes over me as i realize that i have just survived the wrath of possibly one of the most deadly creatures of Sosaria. After ditching these robes my next encounter with the transgendered witch doctor.

After porting back to Luna I discover someone who is able to make better use my robe.