This is a tale about unnecessary mistakes. And sadly even a girl with a fabulous new hair color can make them. But at least I wasn't the only one. There's always some comfort in that.

It's been a while since I was last out hunting and for reasons long forgotten I wake up in Luna. Yes, yes, I know it's starting to seem like I live there. But I don't, really! Most of the time I'm knee deep in danger, bare fist fighting dragons and stuff like that...

So, anyway, I wake up and notice my first marks are just a few steps away. Must be that I've been gone a while. Either the gods feel I'm due for some treasures or people have forgotten about the dangers of thieves. If it's the first, thank you for thinking of me. If it's the second, I'll get you to notice me again! 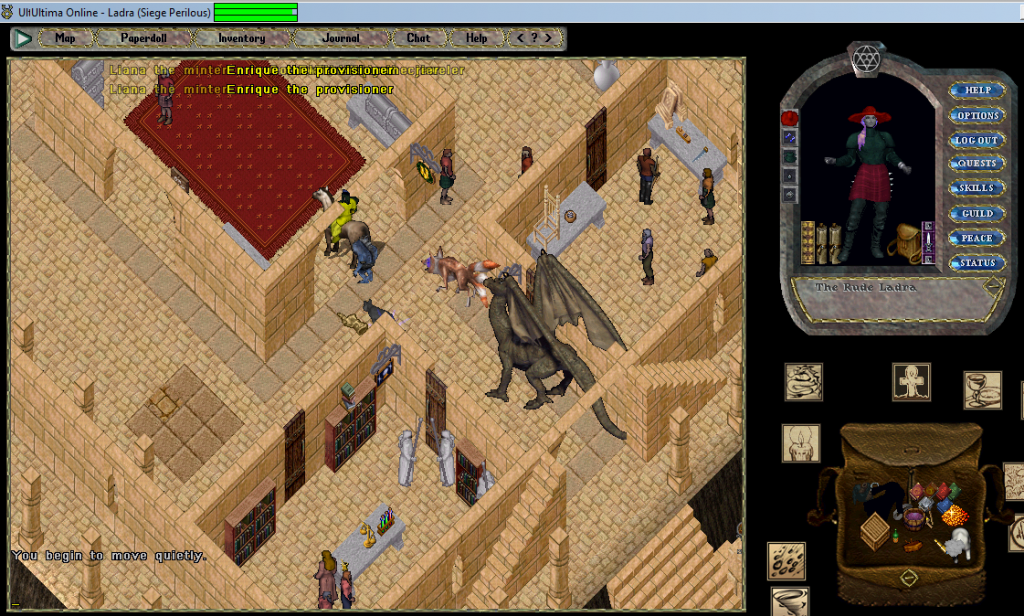 King Edward and Gu'Jek hanging around with a veritable zoo in tow. Naturally a king would have piles of treasures in his bulging pockets, right? Wrong! Of course a king does not carry his stuff by himself. No, a true king has some knave doing the hard work for him. And carry hefty piles of gold, priceless legendary trinkets and things like that sounds like a very fitting job for someone named Gu'Jek. 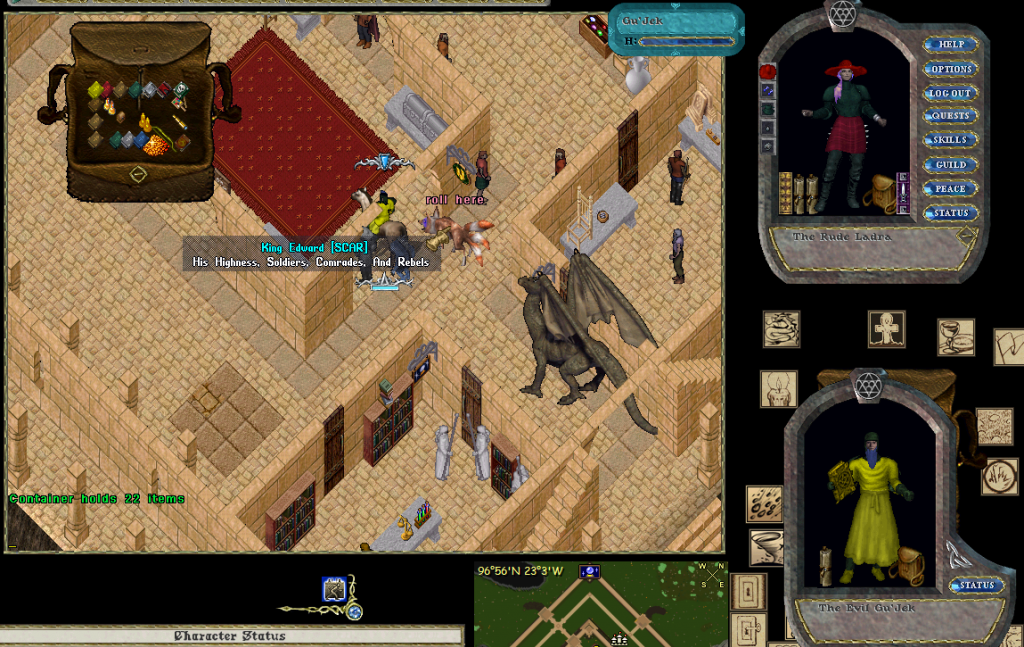 I barly have the time to take a peek in the backpack before the king commands the commoner. "Roll here" Roll? Is it a jester I have found and he is about to amuse his king? Doing a little groveling at the bank floor as a punishment for opening his mouth at the wrong time? Because surely they can't be talking about rolling for something like scrolls?! I've heard tales of a very dashing thief that found people doing that at a bank before. But that wasn't here. No one does that at Luna... Or do they?

They do!
Sure it's not the most rare and valuable of scrolls. (I don't know why a king would need any of these. Or if he did, why he didn't simply claimed them as some form of taxation.) But a Mythical scroll of Swordsmanship could always come in handy.
And for some reason, without knowing it, I target another scroll. Great attention span I got, huh? 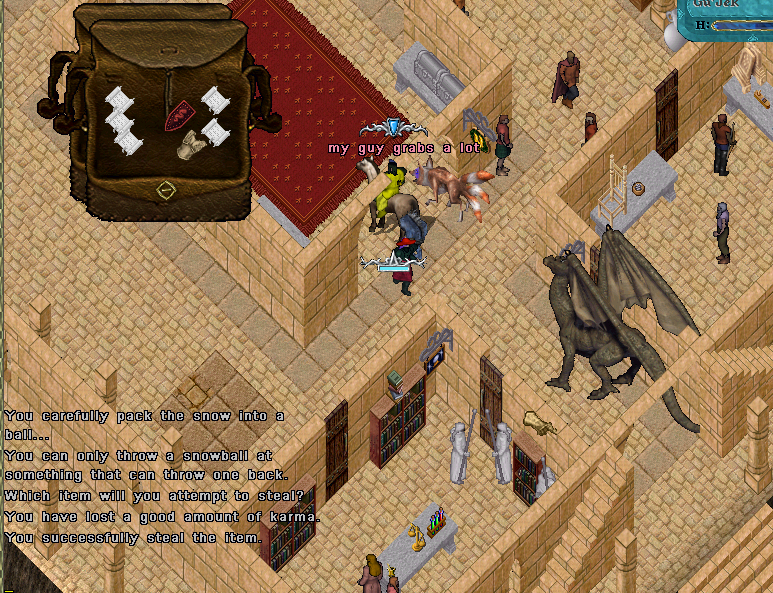 I always expect the worst, even thinking I will go gray stealing a scroll. And since I really don't fancy a halberd to my face, or a flamestrike at my behind, I run like the wind. After turning the corner I inspect my new scroll. Only because I want a photo of my triumph. I mean, I already know what I took, a 115 Swords scroll. 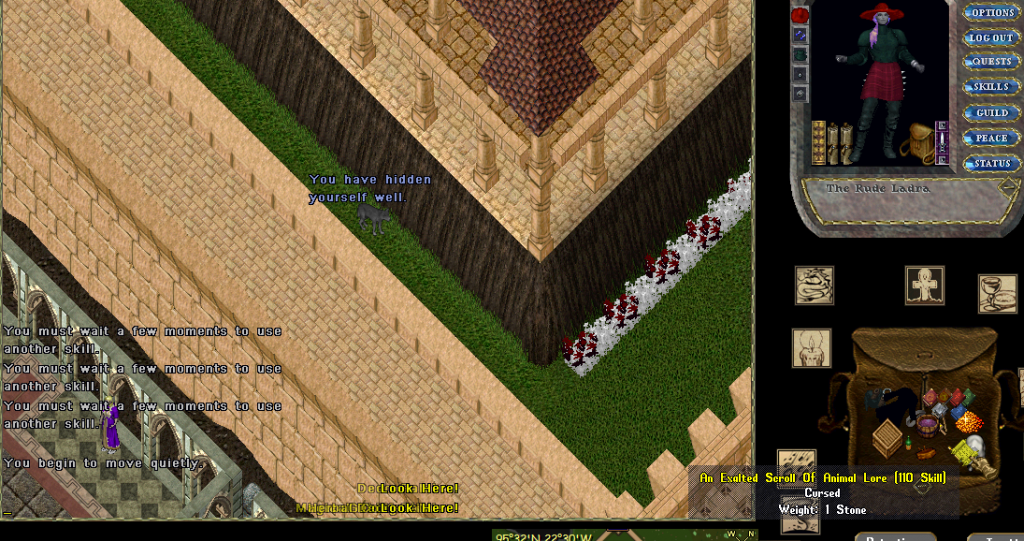 With my head both spinning and hanging low (yes, it's painful) I make my way back to the bank. At least, maybe, I could give the scroll away to some poor guy.

But what's this? The king is still standing there. Didn't he notice me? Or does he simply feel I'm so much below him he doesn't even need to move? Like I wouldn't dare to steal from a king?! 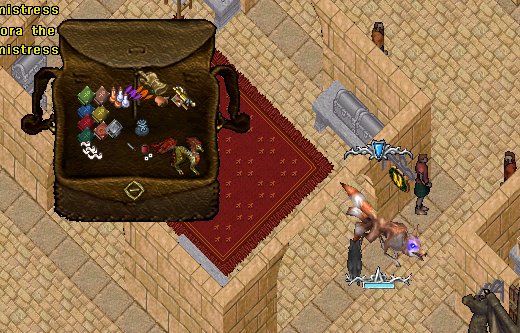 Sadly the reason he's still there is that I was right. He does not carry his own stuff. Just a king-sized chicken, fit for a king. It's a bit tempting to take it just for the fact it's not every day you get to steal something from a real king. Maybe if I just move over here and let my accomplice, who's diguising herself as a banker, hold the scroll... And I trip over something!

Now the chicken munching king will surly not hang around any longer. But I'm thinking that the hidden guy might be Gu'Jek. And there is a slight chance that he's still holding the scrolls. (Yes, I know what you think. But you don't spend as much time researching peoples careless behavior as I do.)
Since I pride myself on having the fastest hands in Sosaria I think I can do this. Wanna see me reveal him, open the backpack, get my hands in the pouch and take the right scroll, all before Gu'Jek can take even one step? I know I do!

But I'm not even close. The king has other plans. 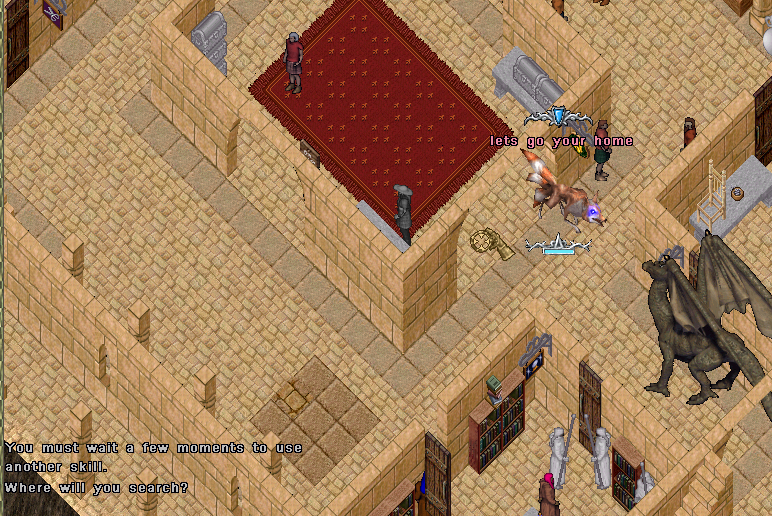 "Let's go your home"
Sure, bring the scrolls. Let's go! 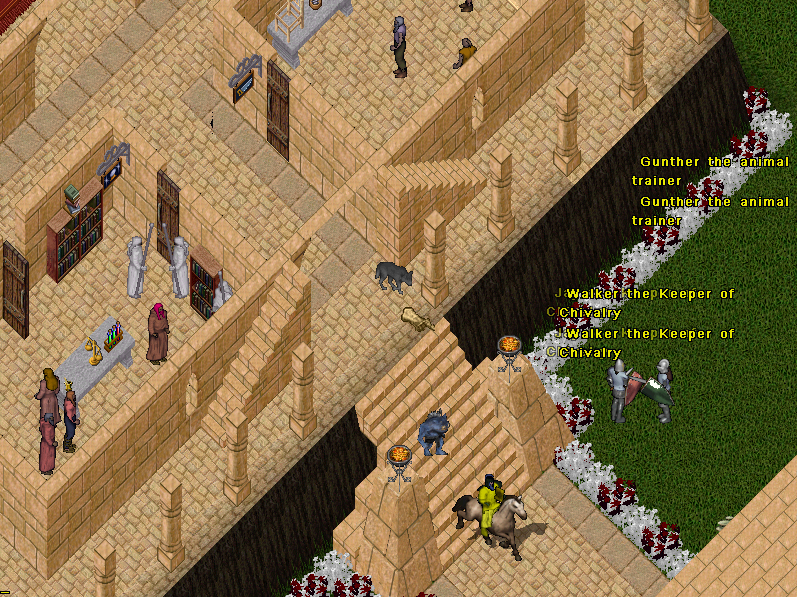 But this is where the tale comes to an abrupt end. I stumble upon my own paws and they get a head start. By the time I catch up with them they are secure inside a private house. Funny thing is, they had a house inside Luna and still decided to stand at the bank rolling.

Not a great day for me. But at least I got a steal just moments after my return. And now I'm back again with new adventures surly waiting around every corner.