Episode 0321: The Story of How Hoodwink Stole Rare's Fest


The Plan was set. It was Rare's Fest. I was told over and over, by many a thief, that it would be impossible to attempt any theft. They had every contingency planned for..... But so did I. Our story begins.......

So there we were, talking amongst ourself. Myself and Shinobi, the pair that had become all but the best of friends since I made my tour over to Atlantic. Unfortunately, despite the hundreds of millions I'd already managed to steal, I was still nameless among the crowd. Shinobi recognized skill however, and took me under his wing. Still, I was a shadow when standing next to him, nothing more. So I threw out my best idea.

"What if?" I began. We started this underground society of thieves. An unspoken guild of sorts. Only the best of thieves get in of course. We meet once a month, and we share with eachother which emissaries from which guilds can be bribed, or fences to sell off our stolen goods, and ideas for bigger and better team steals. Shinobi was intrigued.

This idea however quickly disappated. People would lose interest, we thought. We continued brainstorming, and I threw out the idea, what if we robbed Rare's Fest?

It can't be done. Not after last time. You know all about the PAC rares fest, the event with Tetricyde and Oblivion? They have more security than ever now. But....... I had an idea......

What if, I said, we dressed up EXACTLY like a person in the silent auction? Most of them have transferred, and are on noobs. We could easily replicate one of them. Shinobi was intrigued once more.....however, he has a conscience. After what happened at the last rares fest, he could not bring himself to be my partner. This would be a solo mission. With only him offering advice as we went.......

The most expensive item in the silent auction was the Crimson Dragon suit, with a whopping buyout of 1.2B gold. It was being sold by a man named Europa Trader. I studied everything about him. His mannerisms, (he uses smiley faces nearly every sentence by the way), the way he lags (he pings about 160) his lack of punctuation with sentences, and his tendency to be short, to the point, and above all arrogant. His armor was imbued by a man named Yourstruly, (Which ironically, I already HAD a duplicate suit made by yourstruly) and a spellbook. His robe and shoes were uninsured, and I matched the robe to the EXACT shade while hidden. His beetle was named NoMoreBob. It had 427 stones in it. My beetle was the same. We had the same skin, the same hair, the same tendencies. I learned that he was quitting, he's from europe (ironic) and that he didn't like my thief. He never paid the thief tax. Everyone pays it eventually sir..... and then I became him. I parked my Doppleganger, and the easy part was over.

Talking with some of my fences, I came to find out that items can only be taken out of the auction if they have no bids. *1.2B crimson suit, no bids* (perfect) But I knew there was only a SINGLE way to get past security. I had to wait for the REAL europa trader to strike up a conversation with the owners of the auction house. He would do the security check for me, and he would leave. I'd then enter my doppleganger have a short period of time before someone realized there was two, and I was going to take my chances. Via shinobi's suggestion, I planted communication crystals on every floor of the auction house, and I stealthed about until they struck up a conversation. It was time.

Luck was on my side this day. After they got done talking I learned Europa had an event to attend on a different shard and would not be back for several hours. He exited the house. Everything was falling into place so so well. I ran into the house without as much fuss as I could. Sudina I said? But Sudina was busy with another auction member. Masta Blasta (the other owner) I said, I'd like to have a word.

"Listen" I said. "I'm quitting UO and would like to get a screenshot with my suit one last time. Also I want to use it for advertising purposes." Fair enough, he must have thought. I showed him the location of the suit. It was MINE, after all. 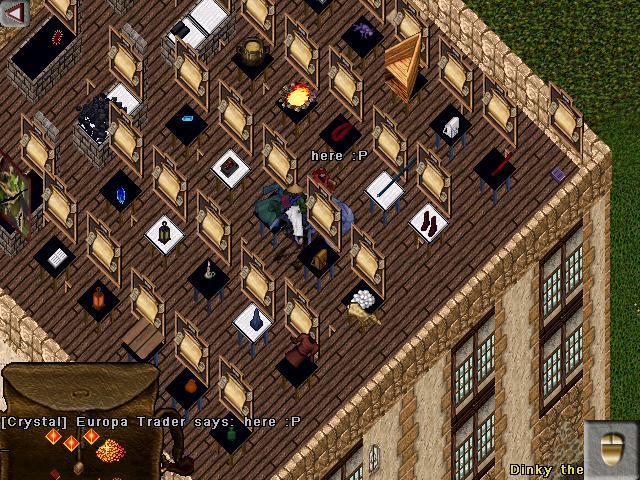 The house was made private. So far so good. Everything was perfect. My heart was beating a million miles a minute at this point. I'd come so far. Then sudina came outside. And handed me a bag in the trade window. I held my breath. 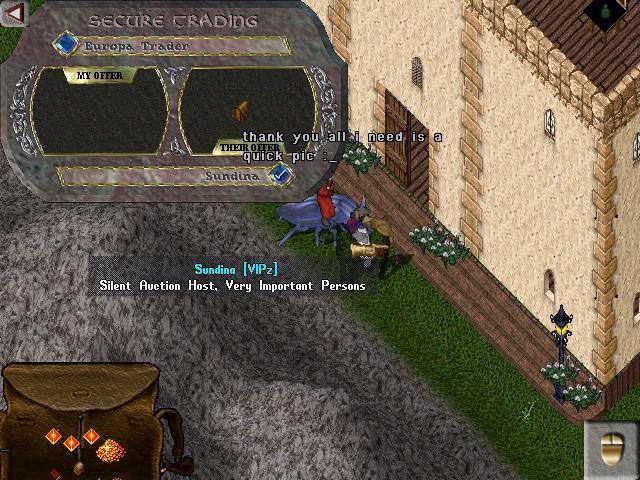 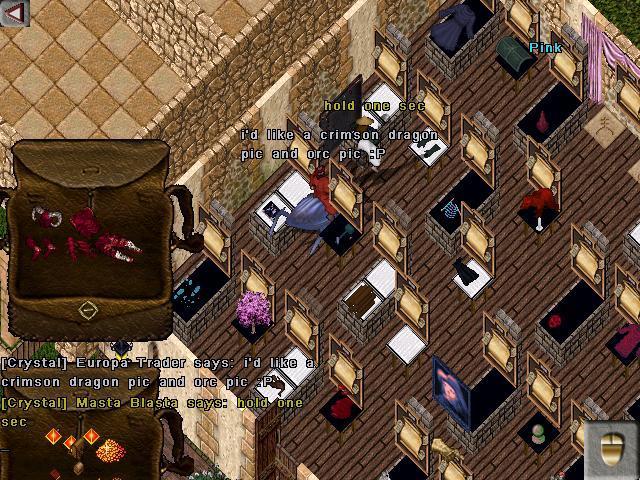 However, it was too little too late for me, and for them. They realized their mistake. They didn't stick to the protocol, because of course they'd spoken to the real Europa just moments before. In their credit, they tried to get it back and THEN do the security check. I decided NOW to make my escape. I wanted to leave as quietly as possible. This was the classiest steal ever, there was no ruckus, no trumpets sounding off. Just crickets, just quiet. I could hear my own heartbeat in my head at this point. I brushed off an excuse to leave, and I knew they'd be on my tail shortly.

I instantly hid next door. I wanted this quiet. I wanted it all quiet. I didn't want the world to know I had just pulled off quite possibly the most perfect heist in UO history. He ran past, and I darted off. It was over. I had won my prize. 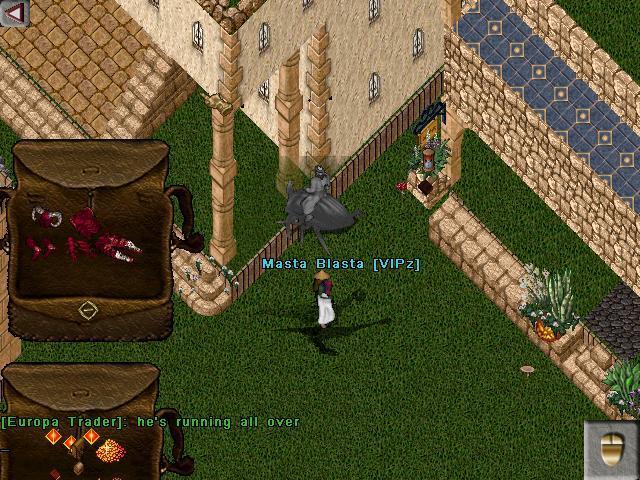 In the aftermath, something came over me. Seeing as I'm a billionaire now, what do I do? This suit should be worn with pride, not collecting dust in a museum. And then it hit me. The unspoken guild of which Shinobi and I had talked of. It was at this point in time, (and discussing with Shinobi) that I made my decision. I split up the suit. Because no rare's collector would ever wear it. It would never be whole again.

I gave a single piece to each of (IN MY OPINON) the best thieves on Atlantic. The thieves who recieved the items: Now I know your all wondering, and waiting, in suspicion, about the piece I chose for myself. I chose my hand, because I was the hand that made it all happen. Now the moment you've all been waiting for: 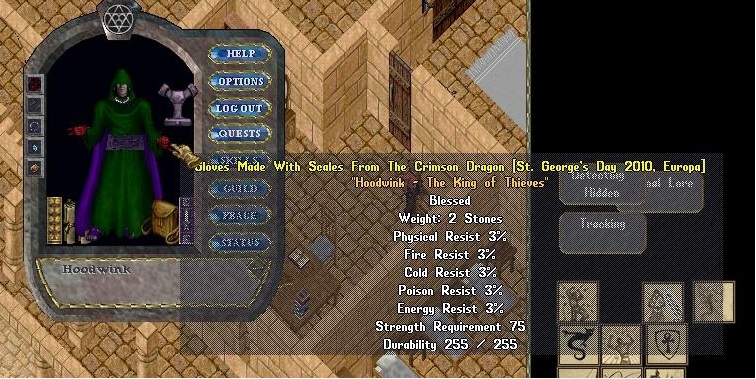 This suit is a symbol of our honor among thieves. It brought together so many thieves in the community, as well as many many people approaching me saying how they were now inspired to be thieves. I don't regret doing it, despite all the hatred, and threats that have been thrown my way. I broke up a one of a kind suit, to never be complete again. Each of the thieves has made a pact, to never sell our piece. They are all blessed, never to be lost. Each has become a part of our suit, as well as a part of our heart.

The last words I have are to Chad. You always knew I wanted to be a part of your story, but it just wasn't in the cards that we were ever on the same shard at the same time. I dedicate this steal, and the entire aftermath to you bro, and I speak for every thief in UO when I say that it is a sad day when Chad Sexington leaves UO. You may not have been the first sir, but we refuse to let you be the last. -Signed, the Crimson Thieves