Ok, so now I stole a house spot someone was getting ready to resize...a 7x7 right outside of the Yew gate area. This should bring in a couple of gold... 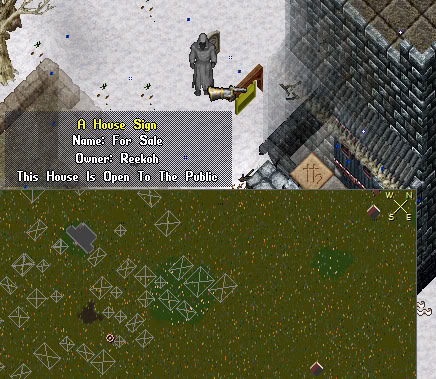 Ok, this is downright scary.

Two house thefts in a row. Now I have two houses right next to the Yew gate.....rofl ftw...la 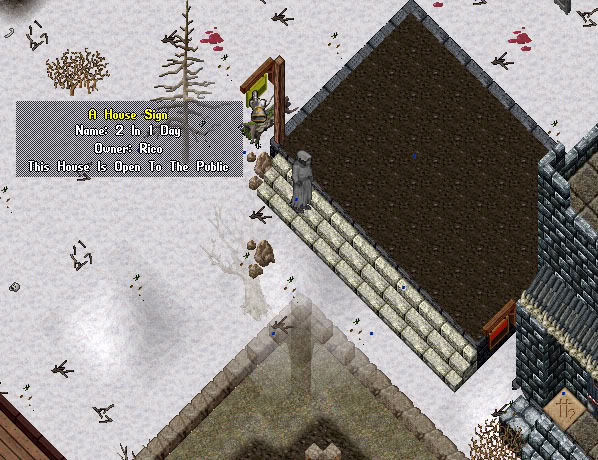 The first house was dropped first, so the availability timer on the plot area was earlier. Once I placed the first one, I logged off that account and relogged into my main account. I saw I didn't have a house placement tool on that character, so I ran to Luna to pick one up. By the time I got back to Yew, there were at least 25 players in the area trying to do the same thing I was...the timer for that plot availablity was about 25 minutes...so I kept trying to drop the new house getting the message that the plot was being resized and not available...then ...*presto*...it was available...I dropped the plot...renamed the house...took a screen shot and then logged out.

SoulWeaver: You could be nice enough and just return it to its owner..

SoulWeaver: Please Rico.... i was helping him resize actually a few of us where. It's not dans fault yes your a good thief u stole the plot and good job to be honest but it doesnt make it right.... We tried to resize it again and i placed the tool got stuck with you tried placing to many times and it didnt reset..... Can you please be reasonable about this i feel terrible for losing Dans house.

Rico: As a thief, I steal things. It's not personal, but now that I have both plots...it would make a fine location to place a vendor house to sell my stolen goods...la

T'Challa: I vote this the *best* steal on Siege EVER! Sorry guys, I know it sucks, but...he basically stole the one of the most expensive plots on Siege, right?

SoulWeaver: Rico please sell me the house back for Sir Daniels. He's one of the nicest guys this shard has and many of you know it. He's always been honest around here. I feel terrible so can you please do the right thing. I'll offer you 10 mill for the house. You'll make a quick buck in a matter of a 2 hours work. You'll still have the one beside it if you want to keep that one. Just work with me I feel terrible that Dan lost his house.

Rico: I don't know. Those plots could go in a package deal. But 10 mill for the one seems a bit light to me...la

SoulWeaver: Please Rico, few of the other guys said they'd help out there not that wealthy, let me get it for 12.5 Please. Dan hasn't done wrong to anyone nor would he ever think about screwing over anyone. Help the server out show them your a decent guys willing to work with me. For Dan's sake.