Ah, this is the life. Grassy fields of green spread out in every direction, the tip of each blade sparkling as incandescent sun meets freshly-fallen dew. Birds flit and flitter in cobalt skies…a flash of bleached white spinning through the air? I gasp. Could it be? No, Locke, don’t get your hopes up…but it sure looks like…BONE!!! I leapt to my feet and started running, as the glorious, mouth-watering bone twirled in the skies above me. A few more feet…mere inches, now. Lowering myself on my haunches, I sprang into the air, and just as my jaws closed around the juicy morsel…

A dragon’s roar stirred me from my slumber. Coughing and hack, I spit a dry-rotted stick out of my mouth. Stick? How in the…. Carefully picking the splinters from my tongue, I blinked into the light of my campfire. It was still lit. Godforsaken dragons, I murmured. Won’t let a man get a decent night’s sleep. The grumble from my stomach successfully forestalled my dragon rant. Alas, it was time to get back to work.

I wandered around Destard for a while, but found the dungeon deserted. All the better, in my mind – an excuse to get away from the bloody dragons. Eventually, I came across two shimmering teleporers. I took the leftward path and found myself in Dungeon Covetous. No one here, either. 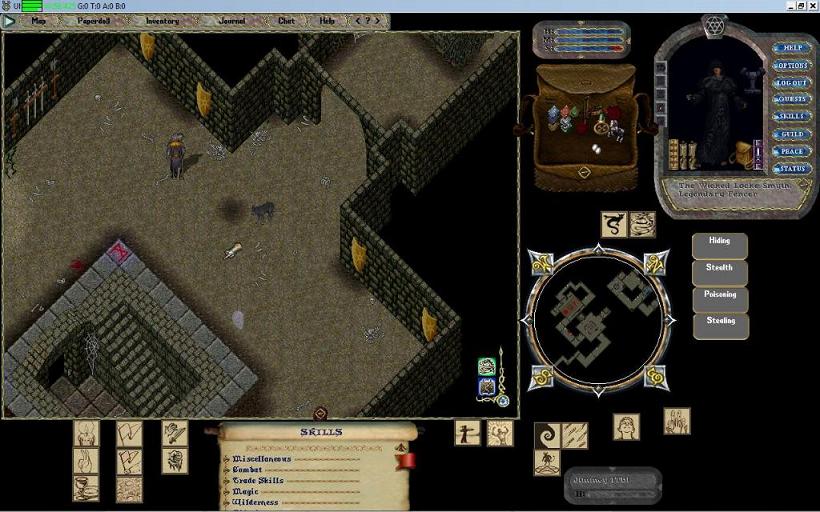 I decided to take the long way out of the dungeon, on the slim chance that I might run across a young, unsuspecting warrior training in the area…also, on the slim chance that they were training with uninsured items. Unlikely, yes, but I had nothing better to do. Remembering the bone dream I’d just had, I figured that, if nothing else, I could pull off the leg of a skeletal knight on the way out. Anything to take my mind off the void forming in my empty stomach.

As I was preparing to leave the dungeon, I noticed a strange looking brazier. What’s this? I sniffed at the brazier. 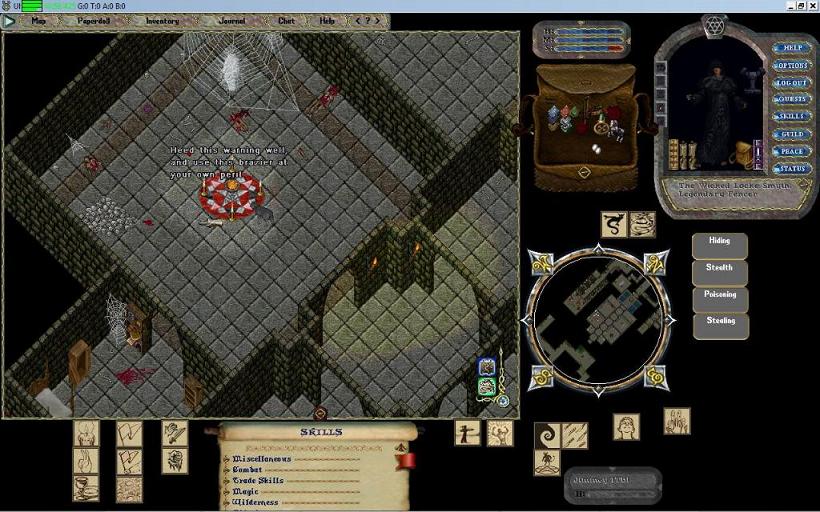 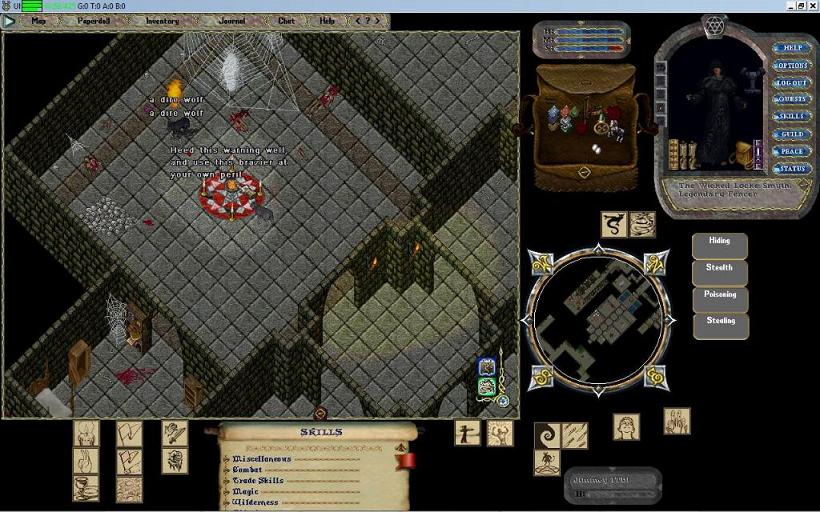 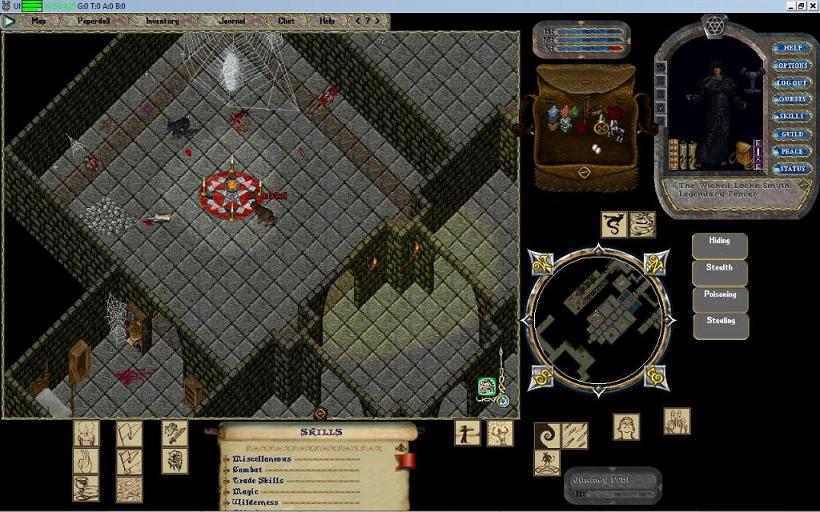 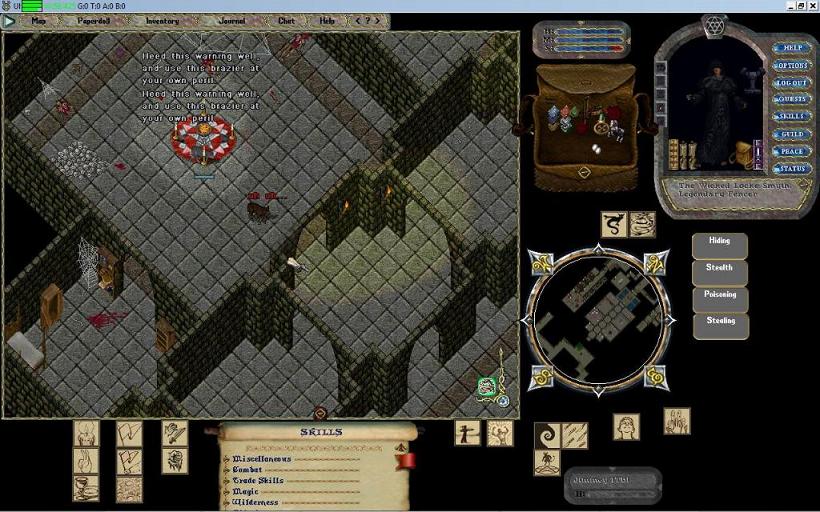 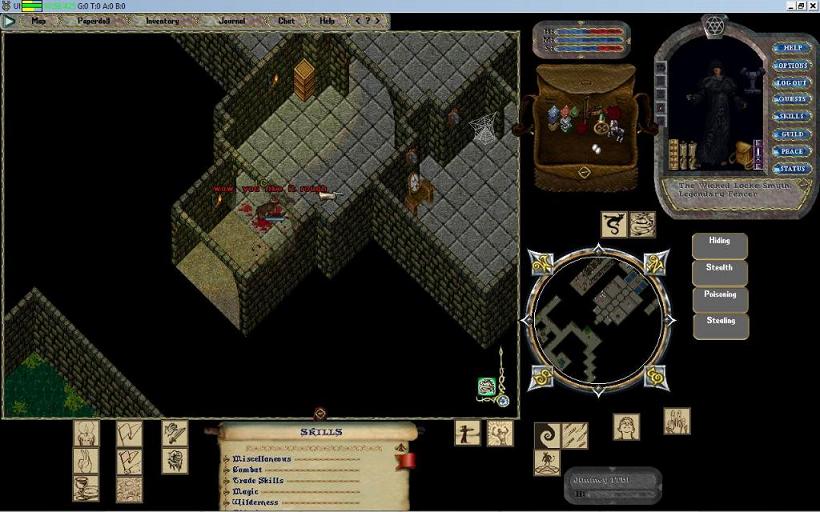 Let’s just say…the young wolf was confused. It happens. Ahem, enough of that. The Dungeon Covetous had given me plenty of excitement, but a growing dog has to eat. On to the Yew gate!

To my great delight, I found the Yew gate a’ bustle with activity, a gaggle PvPers running to and fro, while others shot arrows from the safety of nearby homes. As I explored the area, an archer called Draco landed an arrow in my side. Cursing, I returned the favor by sending a single shuriken into the building after him. Moments later, I received the message, “4800 gold was deposited in your bank box.” He died? I was dumbfounded. One shuriken? Really? Shaking my head, I decided to chalk up that victory up to the newbitute of my assailant.

Snooping around, I noticed an aspiring young ninja, Steven Seagale, training the hiding skill near the moongate…wearing uninsured armor? Oh, happy day! I moved over to him to get a closer look, when I suddenly sensed the protection of the town guards. Drat. Another time, Steven Seagale. One of these days, your suit will be mine!

I snooped around a bit more – enchanted apples here, a stack of bandages there – when something sparkly caught my eye. A vile of Medusa Blood? I stared at the unappealing, crimson liquid. Eh, why not? 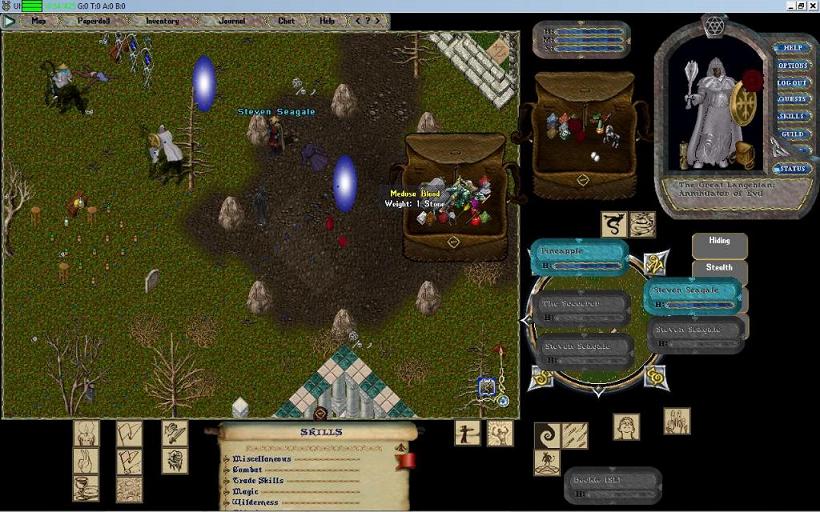 I shadow jumped to Langeblan and positioned myself to snatch the tiny vile, when all of a sudden, a fruity figure called Pineapple killed my prey. Drat. I checked the corpse…the vile of blood was nowhere to be found, but I sensed that it was still nearby. I snooped Pineapple. Ah, there it is. Pineapple was just keeping it warm for me. God love him. 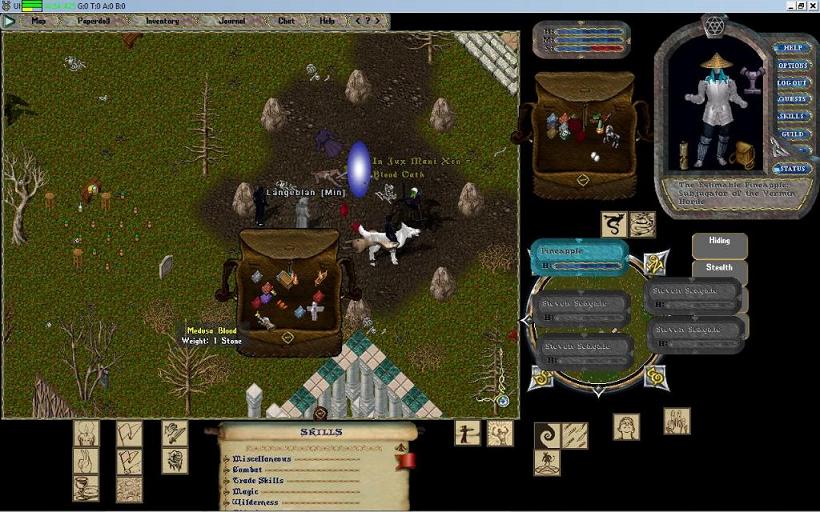 Once again, I prepared myself to make the steal. Have no fear, Pineapple, this hurts me more than it hurts you…or something. Suddenly, just as my hand crept its way into his pack, Pineapple disappeared into the safety of a nearby house. Stupid pineapple. I didn’t want the stupid Medusa blood anyway. Stupid. *kicks a rock* With the Medusa blood stashed safely in Pineapple’s house, my prospects at the Yew Gate were growing slim. I decided that it was time to make my way to Despise. 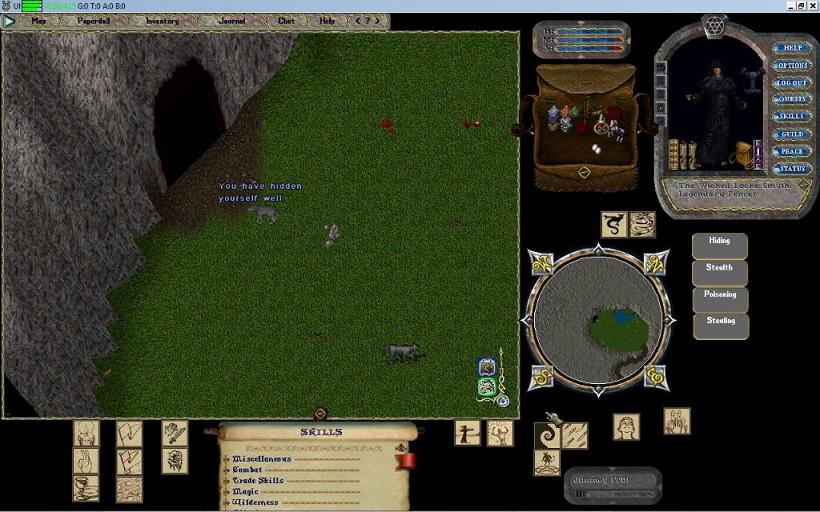 Four to five hunters were running around Barracoon’s lair, but none ran so fast as The Glorious Jimmey, Executioner of Evil, Legendary Swordsman. I snoopeped the backpacks of the nearby necromancers first, as they tend to stand still while working their magic, affording me a bit of time to work some tricks of my own. As I’d expected, everything was blessed and insured. Pickings were slimmer here than at the Yew gate. Concluding that none of the mages had anything worth taking, I began to plot a way to make a running steal attempt against swift-legged Jimmey. I ran through the plan in my mind, Ok, shadow jump, pop the pack, and…huh? Just as I was preparing to shadow jump to my mark, Jimmey – poor, innocent, naive Jimmey – came and stood right on top of me. I love it when my victims cooperate. God love you, Jimmey. 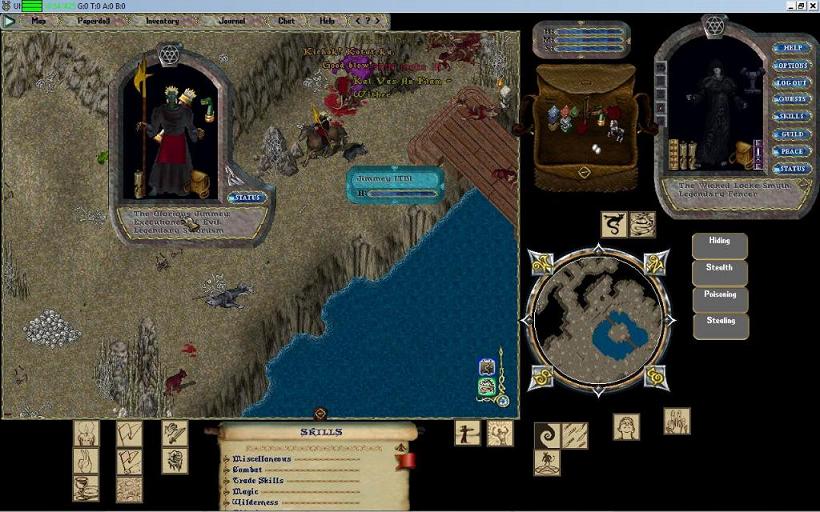 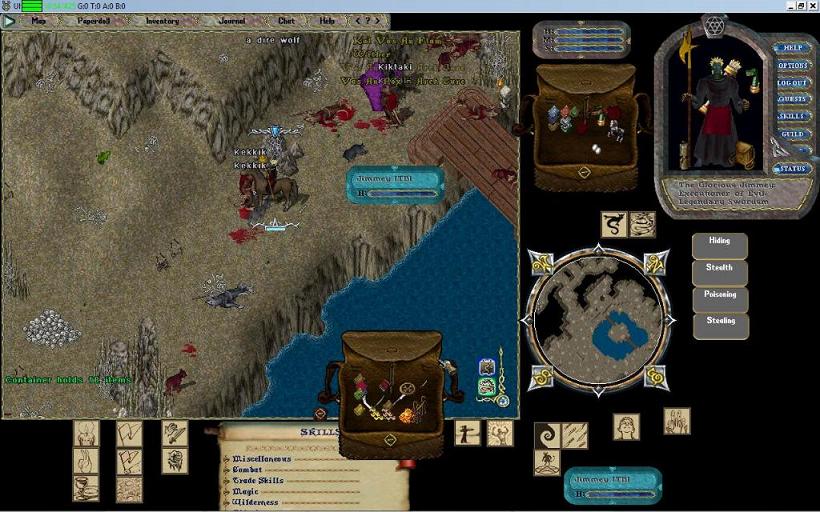 I opened his pack. Bolas, aids…and what’s this? Frisbee!!! 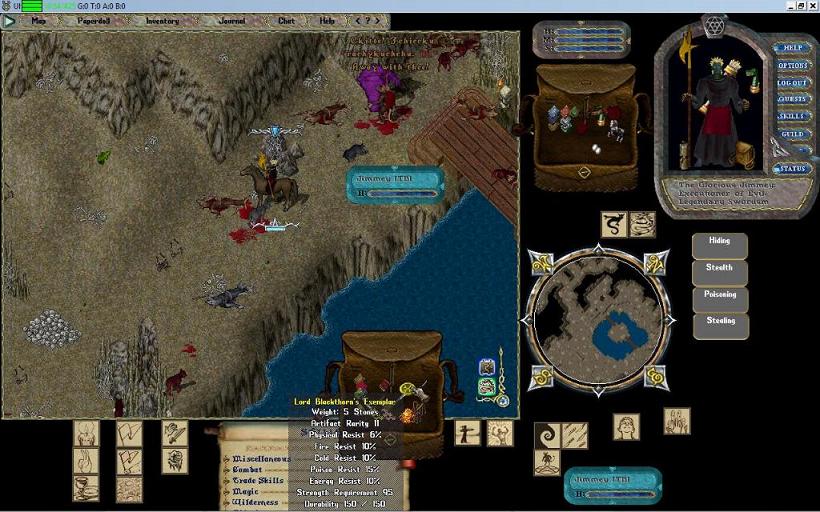 Ahem, forgive my brief lapse in reasonable, neurological activity. When I am in wolf form, I become a bit intellectually frail. Now then, returning to the story, as soon as I saw the uninsured item, I knew I had to grab it before Jimmey started running again. Jimmey likes to run, you understand. Before he could blink an eye, I lunged for the hulking, metallic disk. The moment it dropped into my pack, I reverted into wolf form and sprinted toward the exit. Jimmey, the Executioner of Evil, executed a brief foot chase, but he gave up the moment I slipped into the shadows. 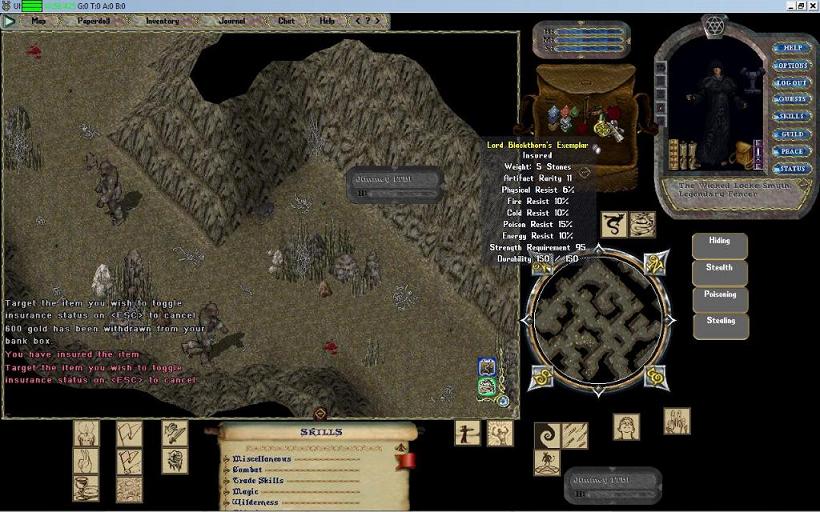 It seems I will be eating tonight, after all. 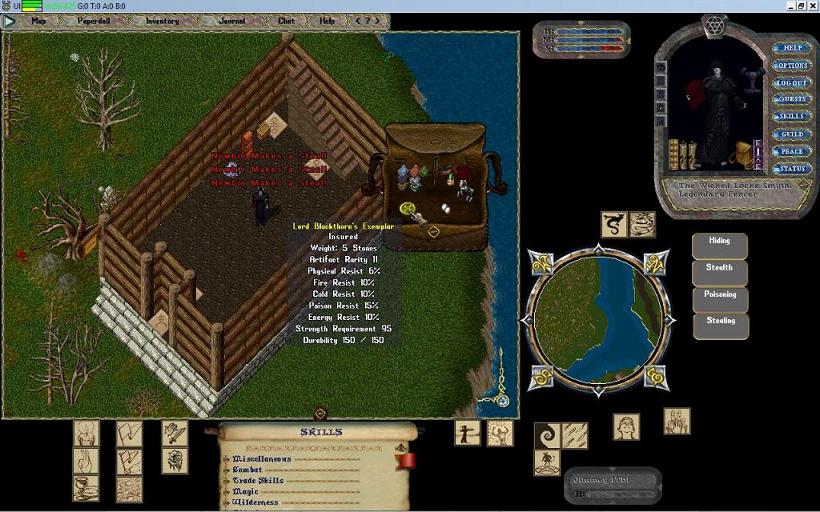 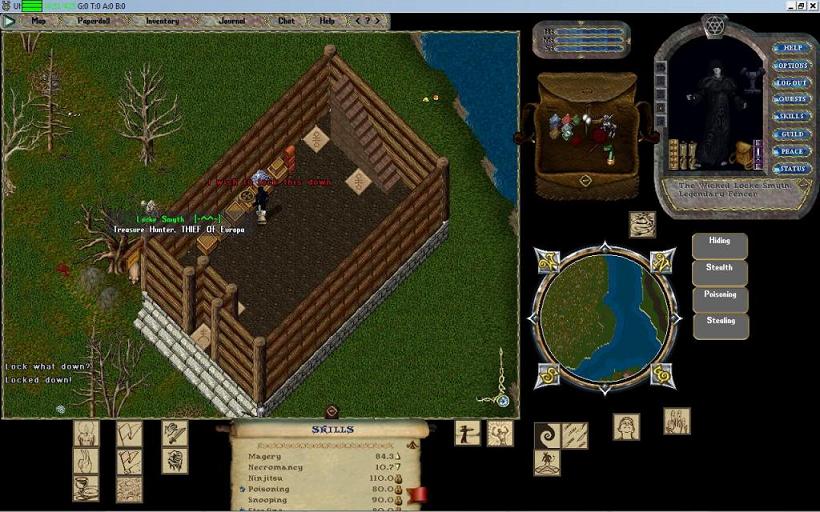