*Disclaimer* It's nowhere near Chad (a creative beast!) quality, but here is my first episode. It was a lot of fun. Please critique me and tell me what I can do to make these better. 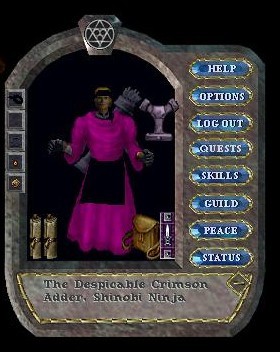 Hmm, I never would have guessed I’d be walking around in a bright pink robe. The things we do to gain acceptance. The story of this flaming robe will be told soon enough. But first a bit of Crimson Adder history.

It has been a long time since I rigged the election in Magincia and became Mayor of the city. Hmm, was there even an election? In any event, the search for virtue (and not to mention Minax’s greed) divided the world. I could no longer enforce my beautiful taxing policy: "Give or I will take." No one visited my fair city anymore. Had the taxation been too fierce? Had my methods been too harsh? Had people simply found something better to do than to visit a dead town on a dying, virtue-less facet? I made a feeble attempt at trying the same taxation methods in my city’s virtuous counterpart. “Welcome to my fair city. A simple tax of 1k gold pieces is required for passage” I would say to new faces. They would but laugh at me. There was no way of enforcing my taxation laws. Demanding taxes became requesting donations, which soon became simple panhandling. How did I go from a feared yet respected member of government to a simple street bum? I soon found myself wandering the streets relieving the rich of their heavy pockets and the young of their very lives. I lived the life of a thug (forever in disguise to hide my true identity) for a while until one day the world changed drastically again. Our world had entered the Age of Shadows. The life of a thief was forever changed. So, I put away my gear and went back to Magincia to hide out the rest of my days.

Years later, while stealthing through the forest something caught my eye. Gold was being paid for protection. 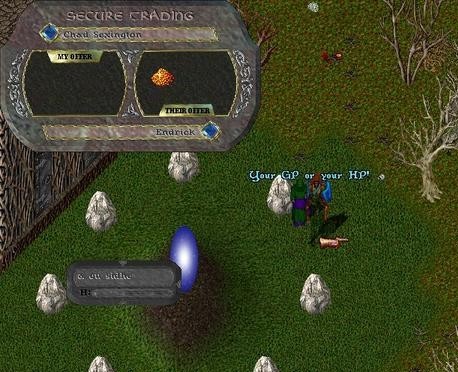 “Your GP or your HP!” The phrase landed a heavy blow on my ears. It brought me back to my days of Mayor of Magincia. I would learn all I could of this Chad Sexington.

Many days and nights spent at the local taverns would tell me of his guild of thieves and glorious misadventures. I had to be part of it. So, I trained up my skills once again and sought out Chad Sexington, who had made quite a name for himself.

Finding him would prove difficult, but eventually we met and talked. I told him of my desire to join his guild. He was reluctant at first. A recent attempt on his life and belongings had left him suspicious of new recruits. And so he found a foolproof way to weed out bad apples. 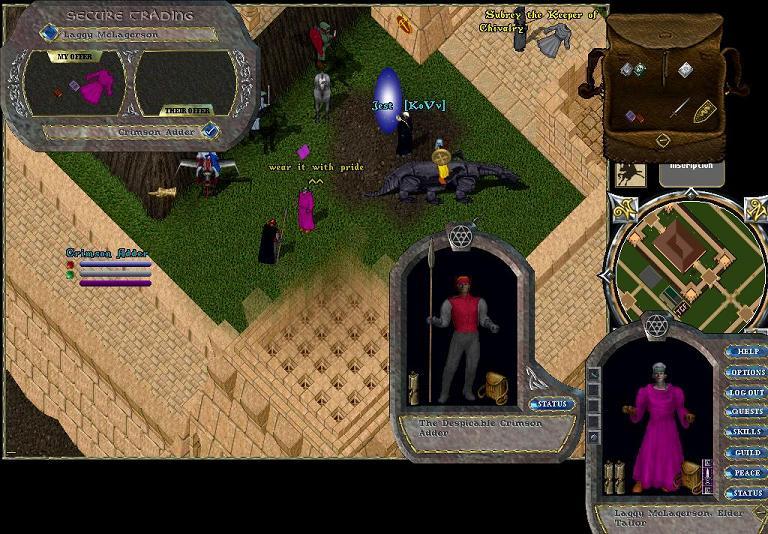 I mean, what self respecting assassin would walk around while wearing a hot pink robe? And so it began. I was to document at least two steals while wearing this incredibly suggestive robe. I swallowed hard (SHHH don’t think it) and accepted the challenge.

And so my story begins.

I traveled to Haven to acquire the new blessed fencing weapons. And what did I find carelessly discarded? 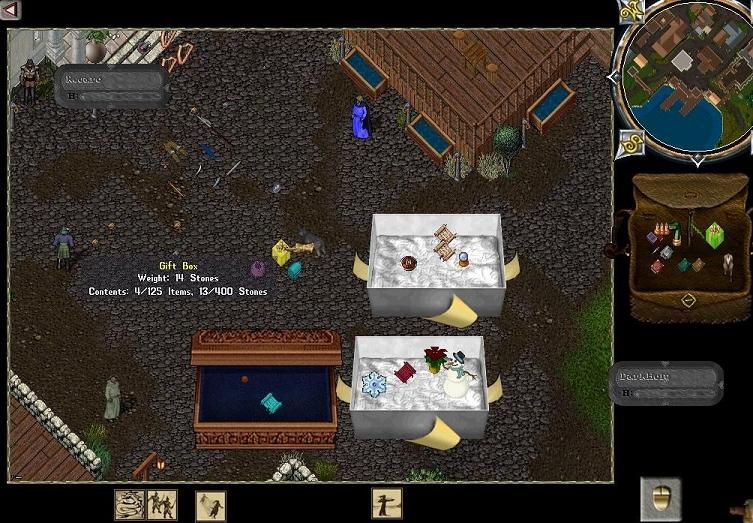 A soulstone fragment token. Not a steal, but worth a mention.


After completing this first task, I decided to head to Yew gate, center of the recent murderer activity. This proved highly uneventful for me. So, I tried Britain gate. Nothing! It was through pure frustration that led me to my next encounter. I bounced through several gates, only to find no adventure, until there was an invisible body blocking one of the gates. 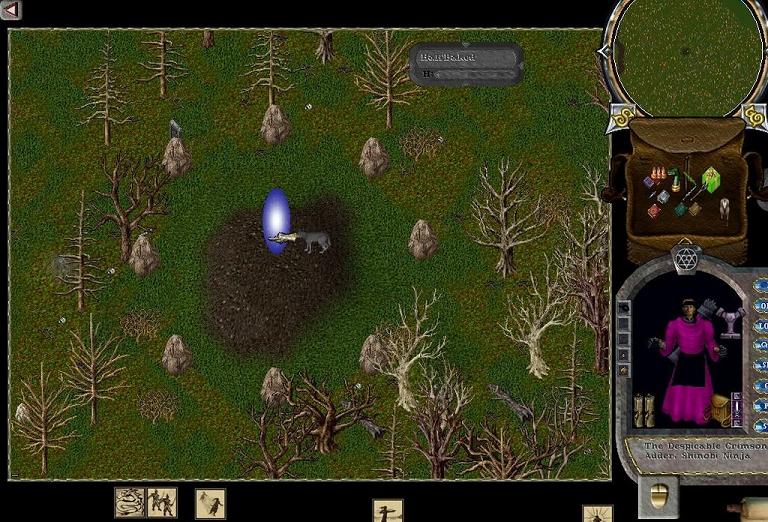 A Wis Quas and hide later showed the culprit.

Was he sleeping? Did the recent gate bounce disorient him for just enough time? Better not waste time Adder.
Shadow jump
Snoop
What treasures await my sticky fingers? 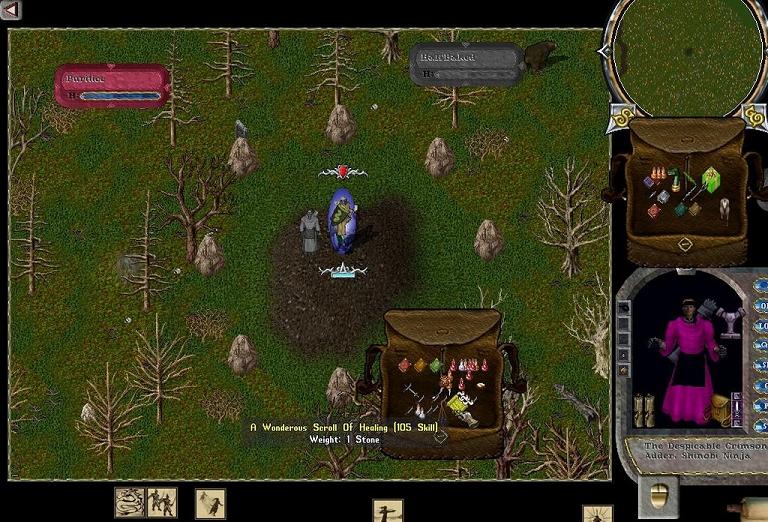 What?! A piece of junk I could grab off the floor without any difficulty? Who was I kidding? I was just happy to find something uninsured other than bandages and potions. 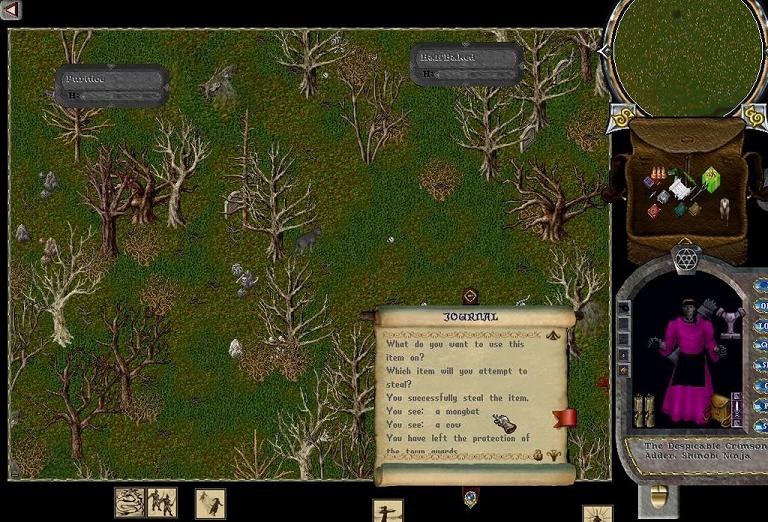 I reached my hand in his pack and grabbed it as fast as I could. My heart pounding, I raced off, blessing my newly trained animal form abilities.


This steal was nothing to be proud of for a full fledged member of the thieves’ guild, but provided a sense of accomplishment for an old veteran reworking his touch. Alas, this would not do. Back to Yew gate.

An excessive amount of shadow jumping and snooping would leave me restless. But an accomplished yet young minded smith wandered helplessly from the gate brandishing his Ancient Smithing Hammer. I cursed myself for not having the weapon skill to disarm his hammer. But upon opening his pack, I found another sight. 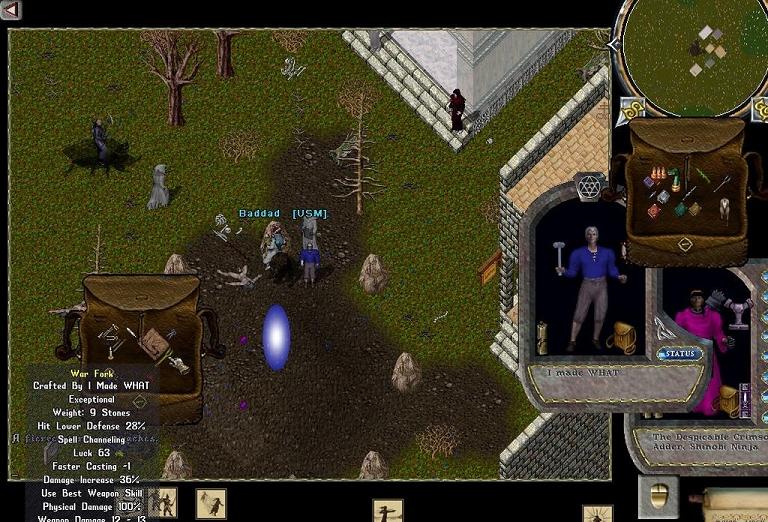 Not a bad acquisition, especially for free. And to do it in guard zone while there were other eyes around would prove eventful at the least.

I took a deep breath. Then, snatch and run! I was off as fast as I could run. The murderer Kaiah was hot on my tail, but I could not lose my new treasure. I stealthily evaded her and she went back to fight at the gate. 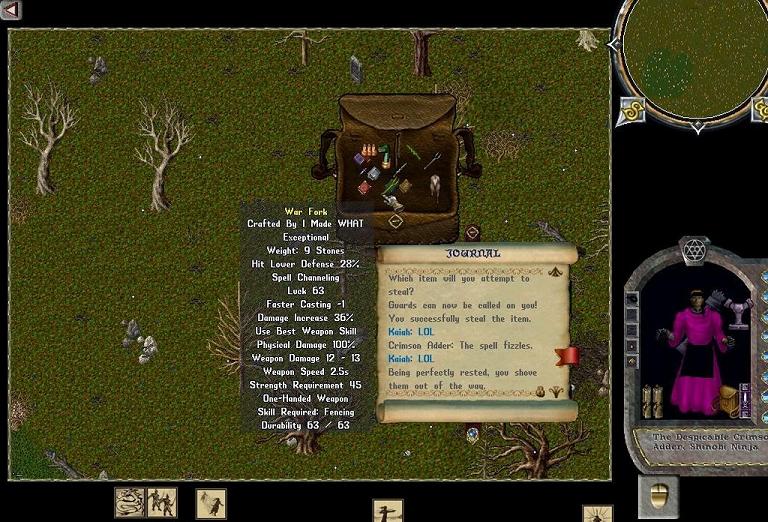 Off to Luna to bank my goods, when who do I see, but the very same young smith. I offer for sale a warfork of fine craftsmanship. 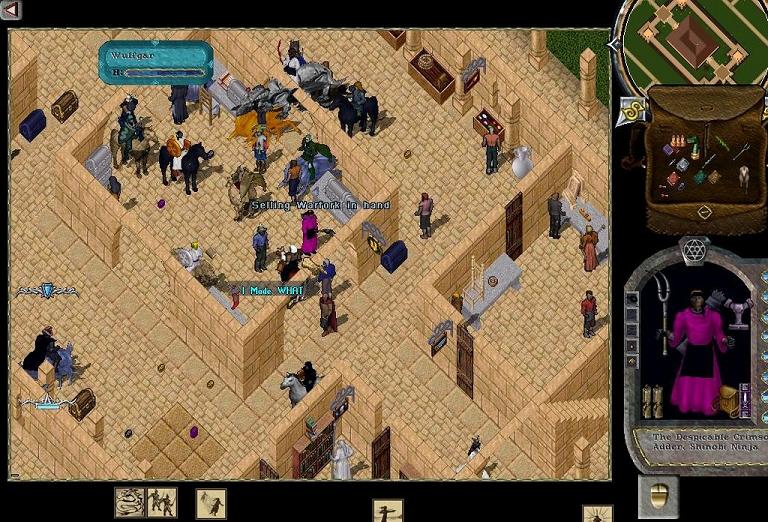 It must not be that fine when the crafter pays me no attention. Whatever, it’s mine now!